It was a mellow autumn evening 150 years ago, and the first ever opera house in Africa was opening in the heart of Cairo.

The Khedivial Opera House made its debut in style, just as its godfather had intended. On 1 November 1869, Khedive Ismail Pasha (1830 – 1895) welcomed world royalty and elites to attend Verdi’s Rigoletto on opening night.

Baptised the Khedivial Opera House, it was renamed the Royal Opera House in the 1930s, and finally the Opera House, plain and without title in the wake of the 1952 Revolution which later overthrew the monarchy and made Egypt a republic. But it was never plain; since the day it opened the Opera House never lost its charm or splendour. Cairenes who frequented it talked about the finery, elegance, and superior musical arts it embodied; and generations of students recalled the thrill and privilege of attending fine performances there, seated in the upper balcony at special affordable student tickets.

Built to seat 850 spectators, the Khedivial Opera House was a small-scale replica of the renowned Milan’s La Scala, itself constructed in 1778. The Cairo version was designed by Italian architect Pietro Avoscani; some sources refer to participation of the Italian Mario Rossi in the design, but others say that Rossi only specialised in mosques, and never collaborated in the design of the Opera House.

The foundation of the Khedivial Opera House was of limestone, and the majority of the structure was made of wood; this made it vulnerable and not solid enough to withstand extreme conditions.

During his reign which lasted from 1863 to 1879, Khedive Ismail Pasha carried on the ambitious work begun by his grandfather Muhammad Ali Pasha (1769 – 1849) who ruled Egypt from 1805 to 1848, and who is described by historians as the ‘founder of modern Egypt’. Ismail Pasha invested heavily in industrial and economic development, urbanisation, and the expansion of the country’s boundaries in Africa. He was famous for his passion for culture and art; he desired to transform Cairo into the Paris of the Middle East, Paris being the epitome of beauty, art, and culture.

The Suez Canal was completed in 1869 during the reign of Ismail; its digging had started in 1859 under his predecessor Khedive Said who ruled Egypt from 1854 to 1863. Realising its momentous value to the whole world, and wishing to draw international attention to his impressive Egypt, Khedive Ismail invited top figures of the world’s royal houses, nobility, and dignitaries to the inauguration of the Suez Canal, which he marked with opulent, unprecedented festivities. For that purpose, he built roads and palaces, and ordered construction of an opera house.

Ismail Pasha chose a wide piece of land between Azbakiya Garden and Ismailiya Square—today’s Tahrir Square in central Cairo—on which the new opera house would be erected in a magnificent setting. Simultaneously, Ismail Pasha commissioned the French garden designer Barillet Deschamps to re-landscape the Azbakiya Gardens. Deschapmps arrived to Cairo from Paris and directly set to work, so that a few months later his new garden was in full bloom to greet the guests who poured in to attend the opening of the Khedivial Opera House.

The cost of the construction and design of the Khedivial Opera House rose up to EGP160,000, a huge sum at the time.

The building comprised three floors: the first included rooms for training of dance troupes and musical ensembles, the second was a storage for scenery sets and musical instruments, whereas the third was for storage of costumes, furniture and theatrical utensils. The building also included a number of ateliers for making and producing costumes, sets and furniture, as well as a display room for the jewellery and accessories used for various shows.

The design of the theatre and main hall was carefully planned to provide the audience with global wide-ranging visibility of the stage from all angles of the hall, as well as a clear consistent sound across the entire hall. The building was completed in a record six months, following which a great number of carefully selected Italian painters and sculptors were assigned with decorating and ornamenting the House. They did a splendid job, using Baroque and Rococo styles which were especially en vogue then in Western Europe and Latin America. The style chosen had a wonderful effect; it bestowed on the new Opera House a lively, vivid style that breathed western aristocracy. The result was an exquisite piece of art that shone and glimmered among its counterparts in the world.

To complete the impressive setting of his Khedivial Opera House, Ismail Pasha had commissioned French sculptor Charles Cordier to make a statue of his father, the illustrious military leader Ibrahim Pasha (1789 – 1848) to adorn the square that stretched in front of the building. In this, he desired to create a lasting reminder of the Alawite Dynasty and their dedicated service to Egypt. On each side of the granite base of the statue were relief friezes depicting Ibrahim Pasha’s victory over the Ottomans in the battles of Acre and Konya in 1832. The two friezes were later removed, then lost. In 1948, to mark the centenary of Ibrahim Pasha, Egyptian sculptors Ahmed Othman and Mansour Farag created replicas of the two friezes; they still stand today on the base of the equestrian statue of Ibrahim Pasha. 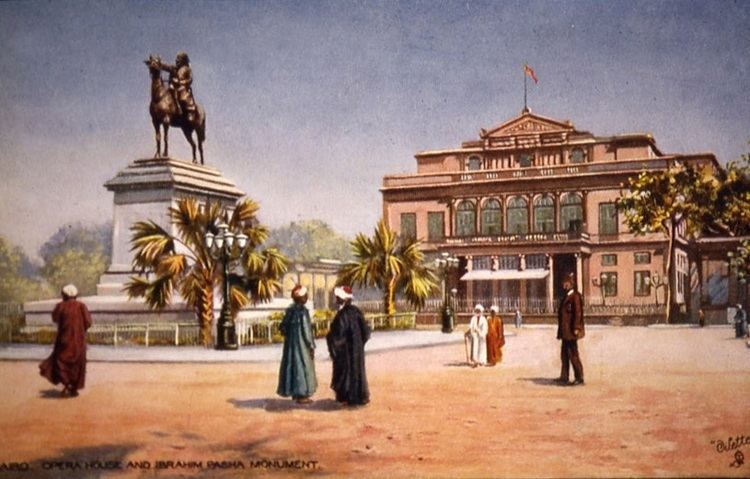 On 1 November 1869, Khedive Ismail stood greeting his honourable guests who hailed from all over the world for opening night at his Khedivial Opera House. Among the luminaries were Empress Eugenie de Montijo, wife of Napoleon III; and Emperor Franz Joseph of Austria. The nobility and intellectuals who came included French novelist Emile Zola and Norwegian playwrite Henrik Ibsen.

While the Opera House was yet being built, Khedive Ismail had already contemplated what outstanding performance its theatre would host on opening night. He dreamed of a performance that would spell Egyptian heritage and showcase the great ancient Egyptian civilisation. French Egyptologist Auguste Mariette (1821 – 1881) advised Ismail Pasha to select a story from ancient Egyptian history and have it made into an opera. Khedive Ismail loved the idea, and it was Mariette who picked the story of Aida from ancient manuscripts he had found while excavating in the Nile Valley. After the story was translated, Ismail Pasha commissioned Italian librettist Antonio Gialanzoni to write the libretto of Opera Aida, and assigned Giuseppe Verdi with composing the music. The Khedive paid Verdi the princely sum of 150,000 gold Francs for Aida, and ordered all the sets and costumes to be made in France; these cost him an additional 250,000 French Francs, a hefty sum at the time. The result was an enthralling opera that was to make its debut on opening night at the Khedivial Opera House. But this was not to be. The Franco-Prussian War erupted, and the sets and costumes for Aida could not be shipped from Paris in time for opening night.

History reminds us, however, that the two grand openings a few days apart in November 1869, of the Khedivial Opera House and the Suez Canal, came at a heavy price. Together with other hefty price tags on great projects Ismail Pasha implemented to take Egypt into the modern age, they landed the country in deep debt. Egypt had to give up its stake in and profits from the Suez Canal, and Ismail Pasha ended his life in exile in Istanbul.

As to the Opera House Khedive Ismail built, it remained for a century a beacon of cultural enlightenment, a place where various cultures shone. 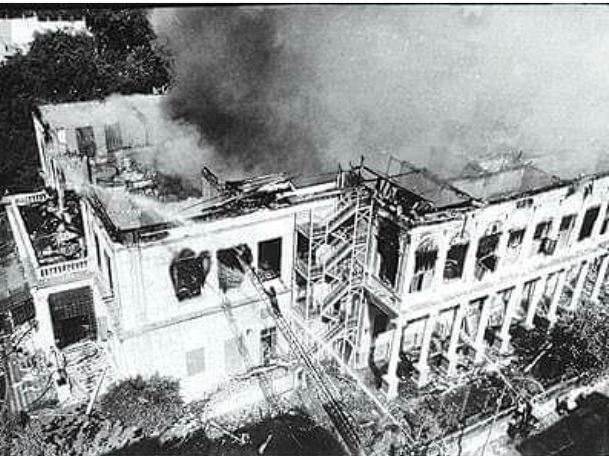 On the morning of 28 October 1971, a huge fire devoured the beautiful, cherished building, its wooden structure turning into ashes in no time. Egyptians young and old rushed to the scene, only to realise there was certainly no hope in salvaging it. Egypt deeply mourned the demise of its gem of an opera house that had carved for itself a treasured niche among world opera houses, and in the hearts of Egyptians. They knew the loss was irreparable.

Rising from the ashes

It took till 1988 for Cairo to get a new opera house. It was not exactly the Phoenix rising from the ashes; it was impossible to beat the 19th-century splendour and grandeur of the Khedivial Opera House. But it definitely had character and, bit by bit, held sway over Egyptians’ hearts as the beacon of enlightenment shining again. 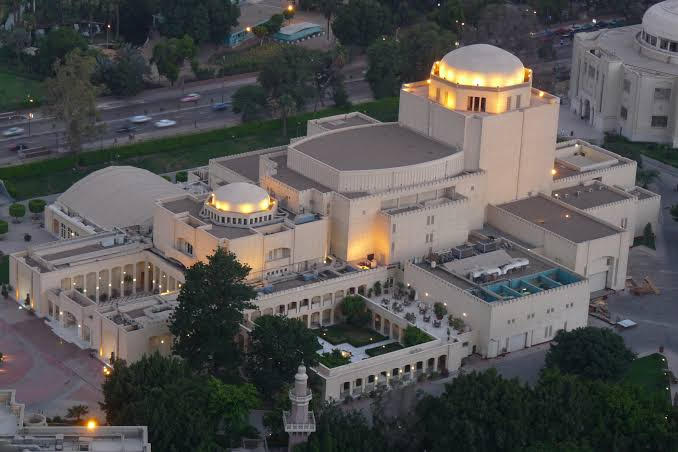 The inspiring, aesthetic neo-Islamic building on the Cairo Nile island of al-Gezira housing the Cairo Opera House was a gift from the Japanese government to Egypt to host a fine arts cultural centre. It was established through a USD50-million Japanese grant, and was opened by President Mubarak and Prince Tomohito of Mikasa, the younger brother of the Japanese Emperor, on 10 October 1988 with a concert that included an outstanding repertoire, featuring a Japanese Kabuki performance.

There is a little-known story behind the Japanese building of the Cairo Opera House. It goes back to the brilliant Egyptian conductor Youssef al-Sisi (1935-2000), who frequently conducted the Cairo Symphony Orchestra. In the 1970s and 1980s, after the Opera House burnt down, the orchestra performed at the Gomhouriya Theatre in Downtown Cairo. Japan’s then ambassador to Cairo was an avid admirer of Maestro Sisi and attended all his concerts. Before his term in Cairo ended, he met Sisi in the wings following one of the orchestra’s performances, expressed his admiration and his wish to offer Sisi a gift in appreciation. Sisi thanked him warmly but declined a gift. There was one thing though, Sisi said, that he and everyone in the music field in Egypt wished for, and that was an opera house in lieu of the beloved one Egypt had lost in 1971. If Japan could help Egypt get a new opera house, that would be a truly historic feat for both people, Sisi said. Back in Tokyo, the Japanese diplomat took the matter seriously and, between him and Sisi, propelled Japanese Egyptian talks on the issue. An agreement was reached within the framework of Japanese aid to Egypt and, since the aid terms did not allow for an opera house, it was decided to call the compound of the opera house the Egyptian National Cultural Centre, an official name which stands to this day. And to this day, that cultural centre stands a bastion of musical and fine arts, a magnet that attracts Egypt’s young and old to the spectacular performances held there.