March 2021 started off a very busy time for the Coptic Orthodox Church. Urgent activities that had to be withheld in 2020 on account of the COVID-19 pandemic restrictions could no longer be put off.

The first three days in March saw the Coptic Orthodox Holy Synod convene for the first time since May 2019, and issue decisions and recommendations. On 6 and 7 March Pope Tawadros II consecrated seven new general bishops and two diocesan bishops to parishes, monasteries, and ministries that direly needed them.

March this year marks the first memorial of Anba Sarapamoun, Abbot of the Monastery of Anba Bishoy, (1937 – 2020)

Pope Tawadros and members of the Holy Synod celebrated Mass at Anba Bishoy’s to honor the memorial.

On 9 March, the members of the Holy Synod headed to the monastery of Mar-Mina southwest Alexandria where they celebrated the Golden Jubilee of St Pope Kyrillos VI who was patriarch in 1959 – 1971, was canonised in June 2013, and is buried at Mar-Mina’s which he revived as a monastery and where a shrine was built for him. It is scheduled that on 10 and 11 March, the Holy Chrism, also known as the Myron Oil would be prepared for the 40th time in the history of the Church by the Pope and the Holy Synod members at the monastery of Anba Bishoy at Wadi al-Natroun in the Western Desert.

In an interview with Watani’s Victor Salama in February 2021, Pope Tawadros explained the role of the Holy Synod. “Our Coptic Church is a synodal church,” the Pope said; “all its decisions are taken unanimously by its Synod of metropolitans and bishops. The Holy Synod is the supreme authority in the Church; it is responsible for enacting legislation and ratifying Church decisions. Hence the importance of its regular meetings and its extraordinary ones when needed. 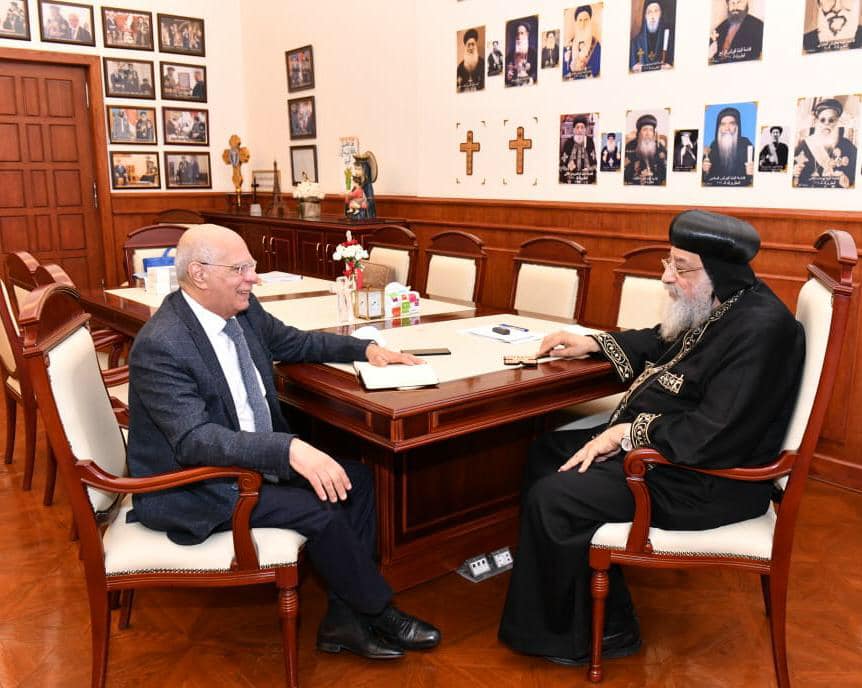 “The Synod convenes twice a year, in November and May. Since I became patriarch in November 2012, the Synod engaged in studies and discussions that pertained to better organisation of the administration of the Church. Bylaws were enacted to govern monastic life, the ministries of bishops, the boards of churches, the education activity in the Church, and others.

“As the congregation grew and the ministry consequently expanded, the number of dioceses multiplied and the numbers of bishops and priests increased. The Synod expanded to include 127 metropolitans and bishops, among them 35 who serve in various places around the world. This made it difficult to convene the Synod twice a year, so we decided in 2015 to have an annual meeting in May or June, following the Pentecost; and to hold an annual seminar in November ahead of Advent. The seminar would be dedicated to discussing a topic or more which would have been meticulously researched throughout the previous year. It was not required of all members to attend the seminar.”

“However,” Pope Tawadros continued, “there was frequently the need to take synodal decisions on urgent issues that could not wait for the twice-a-year assemblies. So in 2019, it was decided to form a 20-member Synod Standing Committee that would take decisions in emergency cases. We thank God for that, because COVID-19 came in with the onset of 2020 and, owing to the restrictions imposed, the year passed by with no Holy Synod meeting or seminar, but the Standing Committee was there to take over. 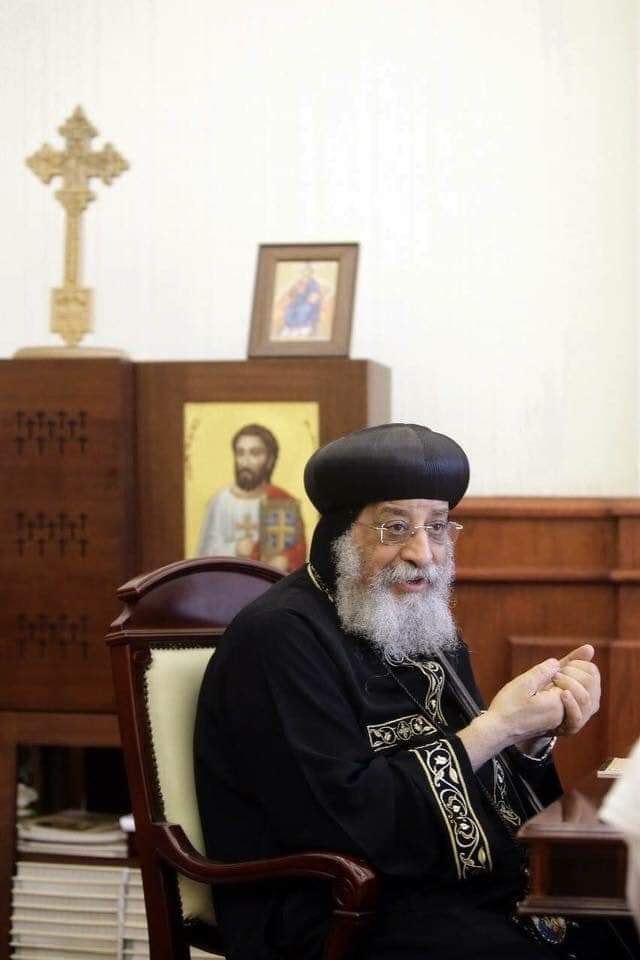 “By far,” Pope Tawadros said, “the most painful decision the Standing Committee had to take was the closure of churches on 21 March 2020. Since that date, there have been regular decisions that eased or further restricted church closures depending on the curve the pandemic took. There were also decisions that regulated significant events such as baptisms, marriage services, funeral prayers, Sunday School, prayer meetings, and other aspects of ministry.”

It was thus an occasion for joy when the Holy Synod convened on 1 – 3 March at the main meeting hall on the grounds of St Mark’s Cathedral in Abbassiya, Cairo. The three days included meetings of synodal committees on diocesan affairs; monasteries and convents; family affairs; education; media; pastoral care; Church services; public relations; ecumenical relations; and the Coptic Diaspora.

On 4 March, the Synod held an official session at the Logos Centre in the monastery of Anba Bishoy. Pope Tawadros II presided over the session which was attended by 97 members. The absentees had declined to attend because of health reasons or COVID-19 travel restrictions. However, they authorised others from among those present to represent them in voting. 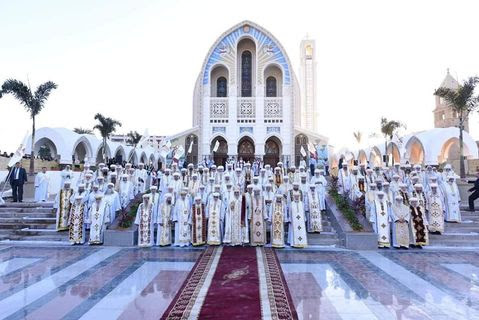 The Synod discussed the ministry of the Church under COVID-19, especially the use of digital applications in lieu of personal attendance of various activities. It also reviewed the study presented by the Coptic Institute for ecclesiastical management and development, which cited the various experience gained by parishes and churches in ministry under the pandemic.

The Synod also discussed the following recommendations which had been submitted by the synodal committees:

1. Supporting the spread of awareness on individual responsibility towards the entire community, especially in respecting preventive cautionary measures [against COVID-19]; this in no way contradicts faith. Also encouraging vaccination provided by the government.
2. Encouraging the acceptance and integration of children with disabilities in schools and pre-school nurseries affiliated to churches; also educating other children to not bully them.
3. Establishing a budget to support providing education and health for children of prisoners, and to rehabilitate those released from prison psychologically and professionally, in cooperation with the Bishopric of Service and any other agencies
4. Supporting the Egyptian State in its development efforts, especially in presidential initiatives such as “A Decent Life” (Haya Karima) and “100 Million Healths” (100 Million Seha), and encouraging our children to benefit from them in coordination with the Bishopric of General and Social Services.
5

. Celebrating festivals on Coptic occasions, on the ecclesiastical and congregational level, to bridge the gap between different cultures, and to present our Coptic culture alongside our orthodox faith. It is proposed to celebrate the following three fixed occasions in churches in the Diaspora: the Feast of the Lord’s Entry into Egypt on 1 June (24 Bashans); the Feast of Modern-day Martyrs (the Libya Martyrs) on 15 February (8 Amshir); and that of Moving the Muqattam Mountain on 27 November (18 Hathor).

The Synod affirmed its rejection of the spread of falsities, deceptions, and malicious rumours on social media and websites, causing confusion and misinterpretation of the service and work of the Church. The Synod has issued several binding principles to set the tone for proper action and behaviour in the Church of God.

The Synod recognised the monastery of St John the Short, off al-Alamein Road in the Western Desert, under the care of Bishop Domadius of Sixth of October City and Ouseem. Coincidentally, the Synod celebrated the publishing of The Comprehensive Guide to Coptic Orthodox Monasteries. The historical document was prepared by the media and information committee chaired by Anba Abra’am, Metropolitan of Fayoum and the Abbot of the Fayoum monasteries. In a large volume of 456 illustrated pages the document lists all Coptic thriving monasteries inside and outside Egypt , a total of 39 monasteries and 14 convents, citing a detailed history of each.

Canonisations to be considered

The Synod accepted two files that were submitted to it to consider the canonisation of the monk Yustus al-Antony and the archpriest Bishoy Kamel of Alexandria, both of whom passed away in the 1970s.

It also decided to put into action the Faith Examination Subcommittee to examine all publications that concern the faith, to preserve the integrity and purity of education.

The Synod decided that it is not allowed to bury any priests or Church lay elder within the walls of a church or buildings attached to it, Church community centres or any Church property such as farms, retreat homes or resorts. it is also prohibited to transfer the bodies of departed, buried priests.

Finally, the Holy Synod declared that it awaited the approval of the Christian Family Law, the draft of which is currently with the Egyptian Parliament.