The Coptic villagers of Dimshau Hashim in Minya, some 250km south of Cairo, had no option but to hold a funeral service on a street in the village, since their small house-church was attacked and plundered by Muslim fundamentalists following Friday prayers on 31 August.

The funeral was held yesterday 6 September; Fr Antoun conducted the service for Wadie Habib Henein who died at 68.

Minya police arrested 38 Muslim extremists from the village on account of the attack. Following preliminary investigations, however, 19 were released and 19 are being further investigated on charges of perpetrating unrest and attacking others for allegedly building a church without licence. The village is currently under tight security, which Anba Macarius noted with a message of appreciation and gratitude to the administration and security authorities of Minya, whom he said were striving to recover the rights of Copts. 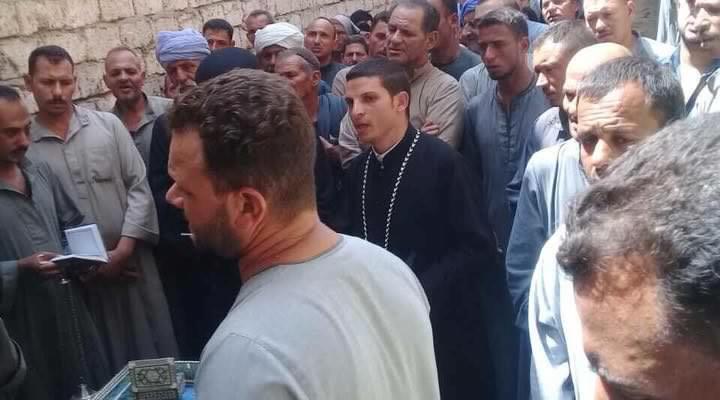 Anba Macarius later met the Coptic families from the village of Dimshau Hashim in Minya, whose houses were attacked last week by Muslim extremists.

Following his meeting with Dimshau Hashim Copts, Anba Macarius said that he was pained to listen to their accounts of the attacks on their homes and the looting that took place amid the wails of their terrorised children. He said it was heart aching that they should be subjected to such horror simply because their families exercised their constitutional right of freedom of worship.

Anba Macarius prayed with the families and talked to them with words of comfort, attempting to alleviate their pain and sense of oppression. He told them that the Christian view requires them to forebear with the persecution they are subjected to on account of their faith, exercising the Christian virtues of forgiveness, tolerance and patience. On the other hand, he said, the national perspective of the attack against the Copts dictates that the State is under the obligation of finding and catching the culprits and bringing them to justice; also of compensating the victims, and rejecting any form of the by-now customary ‘conciliation’ between victim and attacker that jeopardises the rights of the Copts. He said that letting the culprits get away with their crimes in similar previous incidents have compromised the law and sent extremists a message that they can get away with their crimes.