Tamav Irene (1936-2006) was the late Abbess of the Old Cairo Convent of Philopater Mercurius, commonly known in Arabic as Abu-Seifein or the One with Two Swords. She was consecrated a nun on 26 October, 1954, an Abbess on 15 October 1962 and finally departed to heaven on 31 October, 2006; which makes the month of October her month.

Tamav Erene won the love and respect of the people she came in contact with, and many Christian Copts regard her as a saint. Despite the fact that it is 14 years since her decease, she still inspires many of those who want to tread the angelic road of monasticism. In fact, her life, sanctity and contribution to the Coptic Orthodox Church in general and female monasticism in particular have been the subject matter of a great number of books, articles and talks, as well as many films made about her. 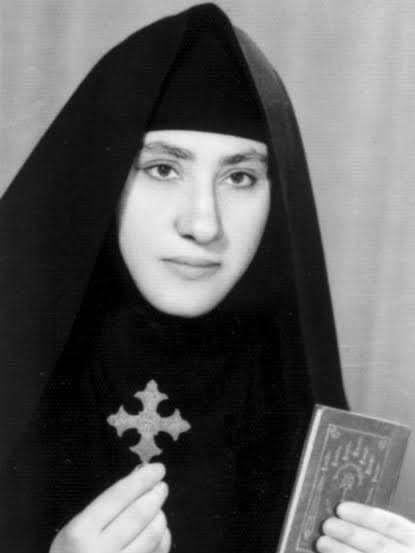 Like many of her predecessors, the nuns and monks who populated the Egyptian wilderness since the fourth century, Tamav was, and still is, a teacher and role model. Like them, her life and teachings stressed the importance of the many virtues taught by the early desert fathers and mothers, namely those of prayer, mercy, love, humility, simplicity and others. What I would like to focus on in this article is prayer in her life. She was indeed, a “woman of prayer”.

Tamav Irene enjoyed prayer since her very young age, having her first example in her mother, Genevieve Al-Feazie, whom she saw praying fervently, shedding tears, and performing many prostrations. Recalling her childhood, Tamav recorded that praying with a contrite heart and tears, and performing metania was carved deeply inside her since her early childhood. She said: “I learnt prayer and metania (prostration) from my mother who used to pray the Midnight Prayer and all the hours of the Agpeya, each in its due hour. As a very little child, I used to sneak in slowly to my mother’s room and stand next to her whenever she went to her prayer corner. …. I would keep her company during the time of her long prayers and heavy tears” (Tamav: A Jewel from Heaven, 34-35).

Another effective member of the family was her pious maternal grandfather Khawaga Matta Al-Feazie. Tamav recorded: “My grandfather used to gather the whole family every evening to pray the Sunset and Retiring prayers from the Agpeya, and then read a chapter from the Bible. He used to contemplate that chapter with us, tell us a story or two, and then go to bed” (Tamav: A Jewel from Heaven, 50). It is important to note that both her mother and grandfather enjoyed special relationships with many of the martyrs and saints of the Coptic Orthodox Church, something which Tamav inherited from a very young age. Thus, home was her first “school of prayer” and the place where she was nurtured the true faith.

Her whole life story stands as a strong example of the effective power of prayer, a strong weapon that she resorted to all the time. It was through it that she found her way to monasticism and particularly to the Convent of the great Martyr Philopater Mercurius. She mentioned that while praying in heavy tears asking God to show her the way, she saw for three consecutive nights a vision of Abu Seifein, whom she had never known before. He invited her to his monastery and actually took her there through siyaha, telekinsim, a ‘spiritual journey in the body’ that does not in fact have a synonym in English. Through it the person is miraculously transported from one place to another in a twinkling of an eye. It was through prayer, fasting and the supplications of the saints that she finally managed to get her parents’ consent to join monastic life. Once at the convent, she resumed her life of continuous prayer, which was her effective weapon to ward off the enemy’s wars which started from the minute she had a cell. He would appear to her in an ugly form holding a knife and threatening her with it, or in the form of snakes and scorpions. In all these wars and others, she heeded the advice of her Mother Superior, Tamav Kyreia Wassef, by praying and making the sign of the cross. She used to tell her: “The devil is as weak as straw. If you blow in his face with the sign of the cross, he will disappear immediately” (Tamav: A Jewel from Heaven, 71). 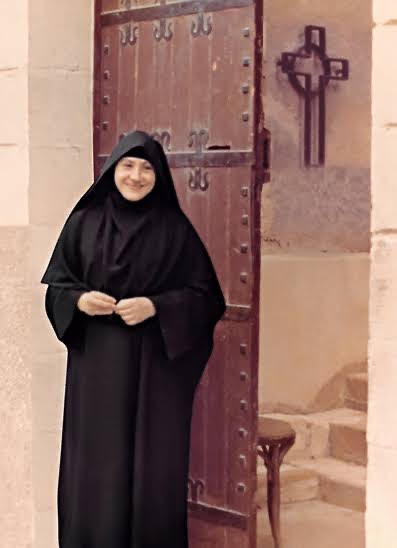 Having tasted and experienced the power of prayer, she, to quote the great Saint Athanasius, “offered herself as a whole burnt offering, undivided” through countless prayers. As a young novice and nun she was overwhelmed with a great deal of work at the monastery; yet this would never thwart her from fulfilling her spiritual law. The price was high; she would only sleep for two hours during the night. However, God would bless them and give her energy as if she had slept the whole night. In this regard, she mentioned that she went through another spiritual war when she thought of going back to her family house, feeling that she was not praying enough because of the overwhelming work she was doing at the monastery. Once more she records: “I sought God’s guidance through prayer,” and He answered her when He sent her the Martyr Mercurius with the message to never leave the convent: “A nun or a monk out of her/his cell will eventually die, just like a fish out of water” (Tamav: A Jewel from Heaven, 73).

Prayer would continue to be Tamav’s very effective weapon when dealing with all the challenges she faced when she assumed leadership of the Monastery. The nuns have many audio and written records of the incredible number of troubles that she went through, many of which were solved miraculously by the power of prayer. I will mention just one strong example which happened at the beginning of her life as an abbess. She was keen on making a renaissance in monastic life at the convent, but was not sure of the way or the right discipline. Prayer with prostrations and fasting for three successive days concluded with her going to heaven and meeting the great St Pachomios, founder of cenobitic monasticism. He told her to follow the communal life discipline, and informed her of the existence of a manuscript with his regulations in the convent’s library. What proves the authenticity of this vision is the fact that no one knew beforehand of this manuscript or its place.

It was no surprise that being a first-hand- experiencer of the power of prayer, she left us many teachings and sayings about it. Among them are: “The life of prayer is beautiful and gives us joy and peace. It is a key by which we open heaven and get what we want from God according to His will” and “Sitting with God, we acquire some virtues and some of His characteristics. It is exactly like when we live with someone, so we start to adopt some of his qualities. …. We take from God peace, joy, love, giving and sacrifice” (Tamav Erene: Leader and Mother 55-56).

This is a brief glimpse of a nun who lived among us and experienced the true meaning of prayer.

Indeed, she managed through prayer to stay in the company of God all the time and to radiate the joy, love and peace that this companionship offered her to all those who knew her or came in touch with. May her prayers be with us all, protect our Church and country.