A recent incident in the village of Saft al-Kharsa in Beni Sweif, 100km south of Cairo, has brought to the surface Coptic bitterness vis-à-vis their deprivation of places of worship, and has thrown into question the ability of the September 2016 law for building churches to secure this right.
During the early hours of Friday 16 June, the police broke into a Church-owned three-story building in Saft al-Kharsa, which Copts use as a de facto church and a community service centre. The villagers were surprised to find the furniture, rugs, icons, pictures, and worship utensils that had been in the building thrown outside, and the building closed down with seals and chains. They took the belongings into their homes. The behaviour by the police was inexplicable.
The day before had seen Anba Stephanos, Bishop of Biba, al-Fashn, and Smesta, visit Saft al-Kharsa to offer his condolences to the family of the boy Bishoi Ayad who had lost his life in the terrorist attack against a bus driving towards the desert monastery of St Samuel the Confessor, some 200km south of Cairo. The attack had claimed the lives of 28 Copts and injured 25 others. Ayad had been among the injured, but died later. Seven from among the Coptic victims came from Beni Sweif.

Membership in Beit al-Aila frozen
The Saft al-Kharsa de facto church is, like countless others throughout Egypt, unlicensed. This owes to the fact that it was next to impossible for Copts to obtain licence to build a church so, in light of the growing population and the dire need of congregations for churches, the Copts had to practise their religious rites in make-shift non-licensed places of worship. In July 2016, unrest erupted in the village when the Muslim villagers suspected the Copts were converting the building into a fully-fledged church [http://en.wataninet.com/coptic-affairs-coptic-affairs/sectarian/beni-sweif-copts-attacked-on-suspicion-of-building-church/16950/]
The security authorities of Biba would from time to time permit the Copts to use the Saft al-Kharsa building for worship, but it was never clear when or why such permits may be given. In November 2016, the Bishopric of Biba filed a request with Beni Sweif Governor to legalise the status of the building as a church, in accordance with the then newly passed law for the building of churches. To date, however, the Bishopric received no reply to its request.
The Coptic congregation and the Church officials in Biba were livid at the recent police raid against the Saft al-Kharsa church. Fr Thomas Bibawy, the church pastor, demanded of the Interior Minister an urgent investigation into the incident. The Bishopric also froze its membership in the quasi-State body of Beit al-Aila, literally the Family Home, formed of Muslim and Coptic clerics and laity and headed by the Grand Imam of al-Azhar for the purpose of aborting sectarian strife.

Copts; second-class citizens
On the evening of 17 June, 50 Beni-Sweif clerics had a meeting with the governor, Sherif Habib. The meeting extended for two hours, and covered all the grievances of the Copts in the parish of Biba, al-Fashn, and Smesta. The clerics specifically demanded that the Coptic congregation should be allowed adequate places for worship since there was a severe shortage in churches compared to the needs of the congregation. They could not contain their anger as they detailed the oppression and indignity they were subject to day in day out at the hands of the security officials on account of the dire need to worship freely and in peace.
“We cannot so much as do the most minor repairs to a church or church-affiliated building without the police penalising us,” the clerics said. One of the priests complained that his church was temporarily closed because he had installed an air conditioning unit.
Another priest said that a policeman had told him, regarding the recent police raid against the Saft al-Kharsa building, that the Bishop should have taken the police’s permission to visit the village.
The result, the clerics insisted, was that the Copts are increasingly feeling they are second-class citizens in their own country.

Bombshell: law for building churches not in force
Fr Ghabrial Tawadros demanded that the Saft al-Kharsa building be licensed as a community centre where worship may be held, and reopened.
Governor Habib told his guests that the information he had about the building was that it was dilapidated and that a demolition order had been issued for it since it was life threatening. This brought on a wave of wrath from the clerics; they said it was not true and reminded the Governor of the November 2016 request filed by Biba Bishopric to legalise the status of the building as a church in accordance with the law for the building of churches. At this point the Governor dropped a bombshell by saying that the law was not yet in force since its executive bylaws have not been issued.
The meeting ended with Governor Habib ordering the immediate reopening of the Saft al-Kharsa building as a community centre, but that no religious rites would be held there till a permit would be obtained from the Prime Minister. He said he would urgently address the PM in this regard, and promised a reply in 48 hours. 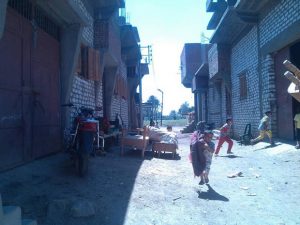 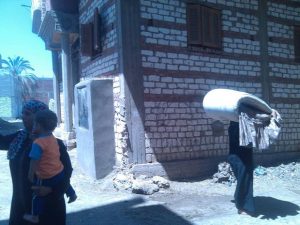 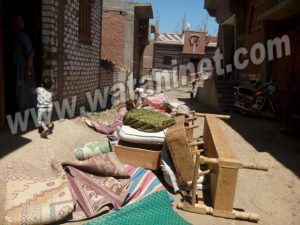