There can be no two opinions that the Suez Canal is among the most important waterways worldwide in terms of significance for international maritime transport and trade. Linking East and West, it is the fulcrum of shipping activity in the Middle East. Today, the New Suez Canal inaugurated in 2015, runs 195km long and involves a 72km parallel Canal that joins the original waterway at two points, making it a mostly two-way water course. 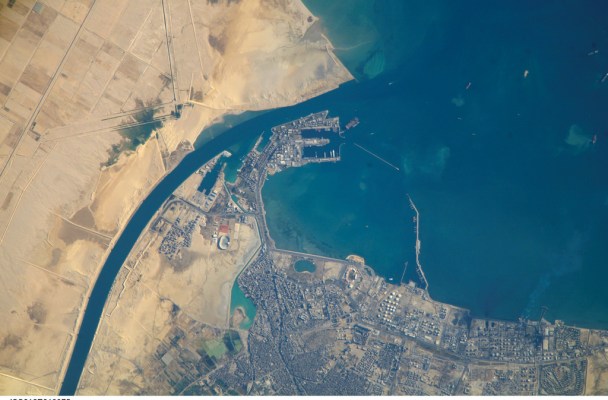 Today, 17 November, marks 150 years on the inauguration of the Suez Canal. It opened in November 1869 when Khedive Ismail was monarch of Egypt. It had taken 10 years to construct it; digging had commenced on 25 April 1859 at the Mediterranean port of Bilsor, later renamed Port Said. The French diplomat Ferdinand de Lesseps designed the canal and supervised the work. 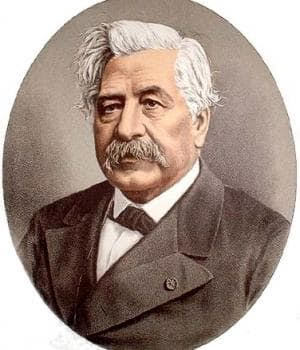 At the time, the Egyptian government conscripted thousands of peasants to dig the waterway, forcing them to work as labourers without pay. Farmers were driven from the countryside, amidst the cries of their wives and children, to the desert under the corvée where they were literally whipped into service. Tens of thousands died while digging the canal. The Egyptian historian George Halim Kyrillos wrote in his book Suez Canal that of the one million labourers, 125,000 died during construction. The working conditions were overly harsh—no modern-day law would ever condone them. 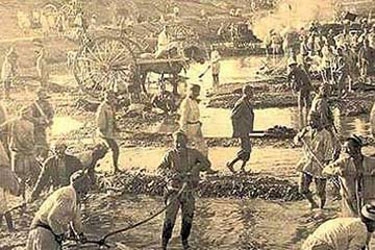 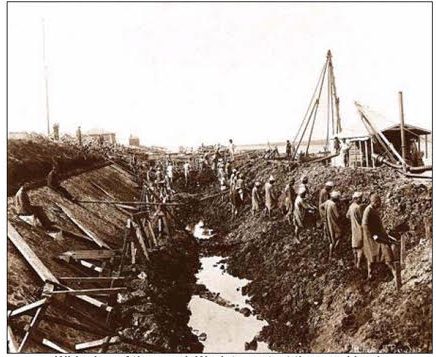 Progress was painfully slow, and the project hit a snag after Khedive Ismail Pasha abruptly banned the use of forced labor in 1863. Faced with a critical shortage of workers, de-Lesseps and the Suez Canal Company changed their strategy and began using several hundred custom-made steam- and coal-powered shovels and dredgers to dig the canal. The new technology gave the project the boost it needed, and the company went on to make rapid progress during the last two years of construction. 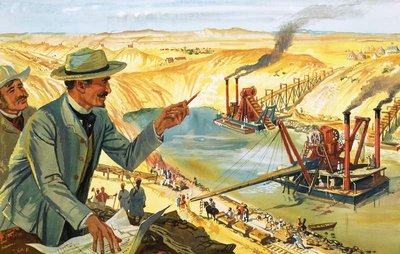 The cost of the canal differs slightly from one source to another. According to historian Abdel-Rahman al-Rafei the cost was EGP16,800,000, while the US consul in Egypt at the time estimated the cost at EGP14,400,000 and the governmental report to parliament cited a sum of EGP16,100,000.

The present Suez Canal is the last in a long line of illustrious forerunners.

The idea of digging a canal to connect the Red Sea and the Mediterranean dates back to the ancient Egyptians. During the reign of the Twelfth Dynasty King Senusert III in about 1850 BC, a canal was built to connect the Red Sea to the Nile which flows into the Mediterranean and which always acted as a vital route for transport and trade. The canal supported the flourishing trade between Egypt, Africa and the Mediterranean, but finally fell into disuse. Some 550 years later in 1310BC a second canal was dug by Pharaoh Seti I, the son of Ramesses I, founder of the Nineteenth Dynasty. A third was built in the Twenty-sixth Dynasty by Pharaoh Necho, who formed an Egyptian navy which he dispatched to Africa; in 610BC he re-dug the waterway made by his predecessors to facilitate trade between the Mediterranean, the Red Sea, and the Indian Ocean. 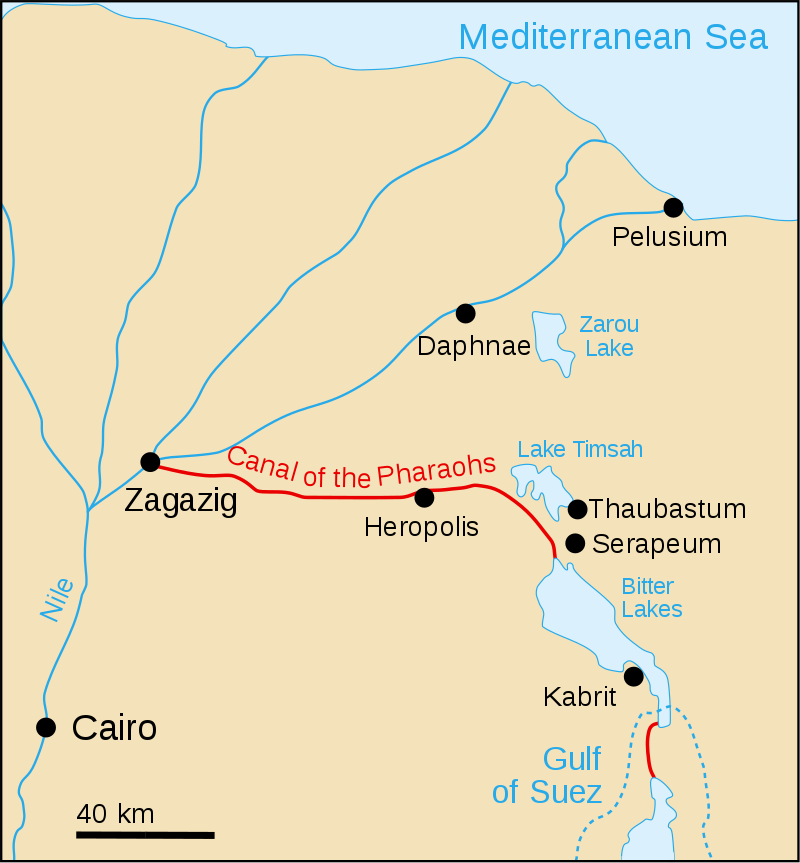 Another canal was dug under the Persian Darius the Great in 510BC, when trade between Egypt and Persia was of prime importance. In 117AD the Roman emperor Trajan decided to revive the canal and dug a new branch from the Nile to connect the Mediterranean and the Red Sea. The canal functioned perfectly for 300 years but, as in case of its forerunners, was neglected and fell into disuse. Islamic texts state that this canal, which they say had silted up by the seventh century, was reopened about 642 by Amr Ibn al-Aas when he conquered Egypt. It remained in use until 767 when it was closed in order to stop supplies reaching Mecca and Medina, which were then in open rebellion. 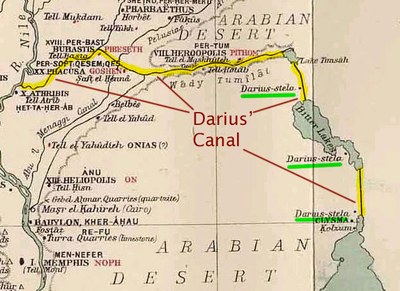 The canal subsequently disappeared until 1798 when Napoleon invaded Egypt and his forces remained there for three years. From ancient times until then, the way to join the two seas was always conceived via the River Nile. The French, however, envisioned a canal that would directly join the Mediterranean and the Red Sea. But they had to abandon the idea once a preliminary survey erroneously concluded that the Red Sea was 33 feet higher than the Mediterranean, requiring locks that were too expensive and would take a long time to construct. The error came from fragmented readings mostly done during wartime, which resulted in imprecise calculations. 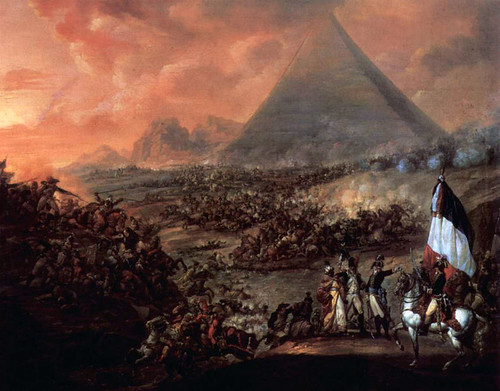 Muhammad Ali Pasha became Viceroy of Egypt in 1805—Egypt was then part of the Ottoman Empire—and carried out considerable reform on all levels, deservedly earning the title ‘founder of modern Egypt’. The French diplomat Ferdinand de Lesseps, who had discovered the error in the calculation connected to the digging of the canal, discussed with the Viceroy the possibility of constructing the waterway. The Egyptian ruler rejected the idea and bluntly told de Lesseps that he did not want another Bosphorus in Egypt. Muhammad Ali was alluding to the Turkish straits that had led to European interference in Turkey’s affairs.

In 1854 Said Pasha ascended the throne of Egypt. De Lesseps, who was Said’s childhood friend, succeeded in enlisting his interest in the project. In 1858 La Compagnie Universelle du Canal Maritime de Suez (Universal Company of the Maritime Suez Canal) was formed with the authority to dig a canal and operate it for 99 years, after which ownership would return to the Egyptian government. The company was originally a private Egyptian concern, its stock owned chiefly by French and Egyptian interests.

The agreement included the provision that the Egyptian government should provide the land for the canal free of charge, as well as the land alongside the canal, and this was to be exempted from taxes for 10 years. All machinery, materials, tools and equipment were also exempt from duty. The Egyptian government was required to provide four-fifths of the required labour, with Egypt getting 15 per cent of the net profit.

On 17 November 1869, the barrage of the Suez plains reservoir was breached and the waters of the Mediterranean flowed into the Red Sea. The Canal was opened for international navigation. Egypt owned 44 per cent of its shares.

The completion of the Suez Canal was a cause for considerable celebration. Khedive Ismail who ascended the throne in 1863 made it his prime concern to introduce progressive changes on the cultural, architectural, and economic levels that would take Egypt to European standards of civilisation.

To celebrate the inauguration of the Suez Canal, he built roads, palaces, and hotels to host his royal guests. He also built the Cairo Opera House, modelled after Milano’s LaScala, and commissioned Guiseppe Verdi to compose Aida especially for the occasion. Verdi, however, could not meet the deadline and the opera house opened with his Rigoletto instead.

In Port Said, the festival began with fireworks and a ball attended by 6000 guests who included heads of State and royalty—notably the guest of honour, Empress Eugenie of France; the Emperor of Austria; the Prince of Wales; the King of Hungary; the Prince of Prussia and the Prince of the Netherlands. 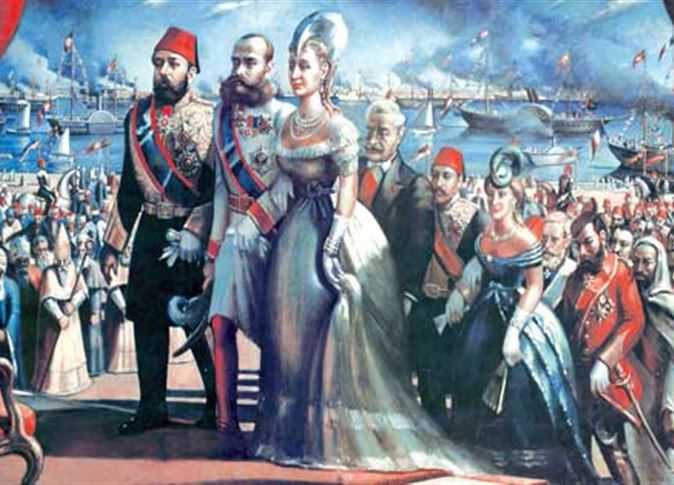 Two convoys of ships entered the Canal from its southern and northern points and met at the midpoint, at the town of Ismailiya, where three platforms covered in green silk had been set up. The largest was for the royal guests; on their right was one for Muslim sheikhs; and on the left was one for Christian clergy.

The festivities lasted for several days. 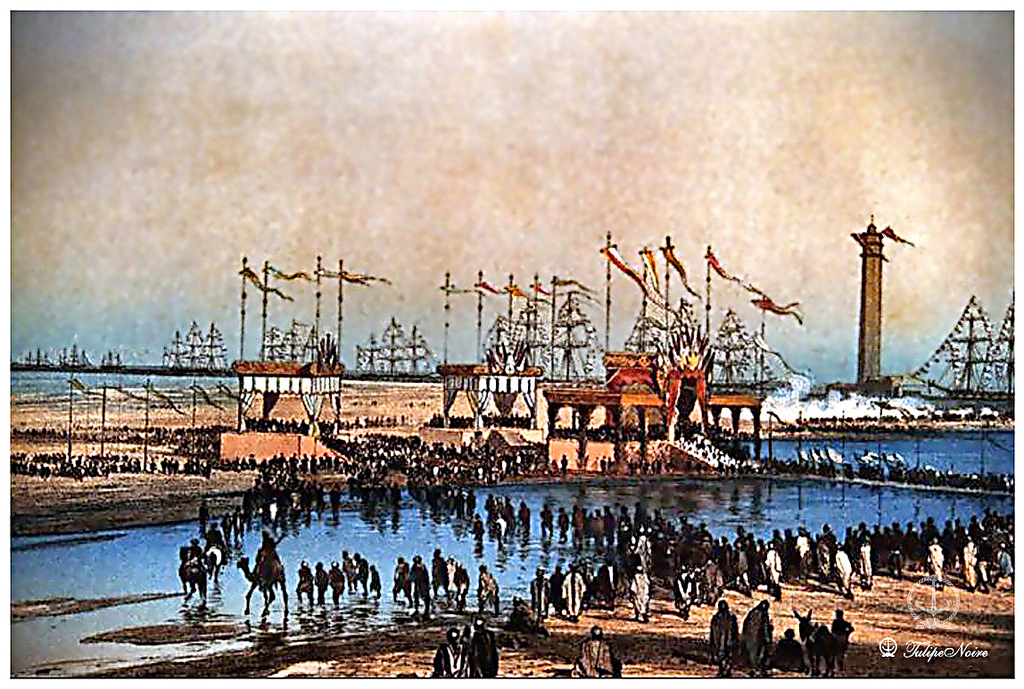 The history of the Suez Canal was rife with struggles, many of which landed Egypt in severe trouble.

The digging of the Suez Canal and the sumptuous festivities for its opening left Egypt in huge debt. In 1875, Khedive Ismail was obliged to sell Egypt’s shares in the Suez Canal to Britain. The move opened the door wide for British intervention in Egyptian affairs, which ended in British occupation of Egypt in 1882. Since that date, Egyptian nationalists fought in every way to rid the country of the British. The anti-British sentiment peaked in the 1919 Nationalist Revolution, leading Britain to unilaterally grant Egypt independence in 1922. But it was independence with strings attached; Britain would retain forces in the Suez Canal zone to guarantee that supplies to Europe were not interrupted. Egyptians were not happy and, in 1936, a treaty was signed between Egypt and Britain to phase out the British military presence in the Canal zone. But WWII and international and local upheavals erupted, so that full evacuation of the British forces was not realised till June 1954, in the aftermath of the revolution in July 1952 which abolished the monarchy and turned Egypt into a republic. 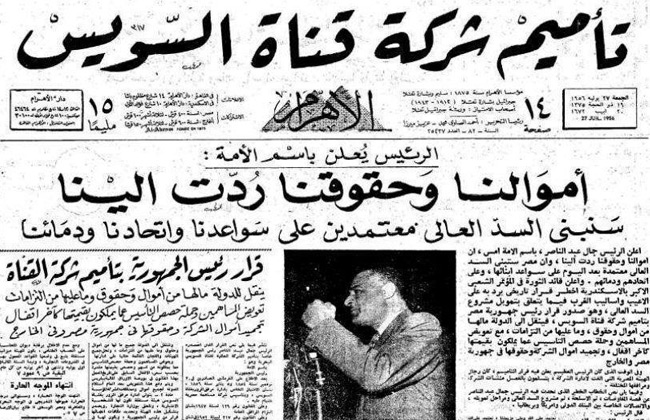 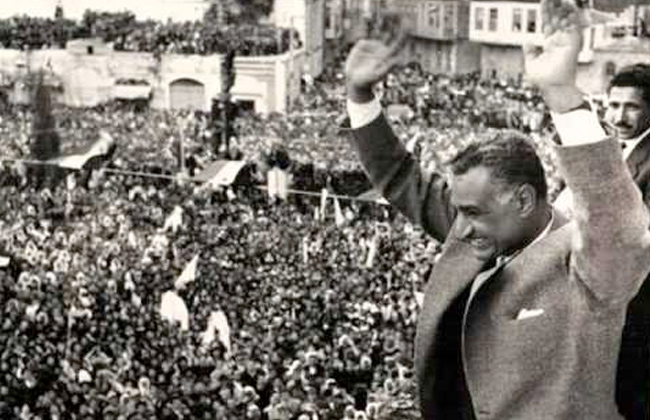 On 26 July 1956, Egypt’s President Gamal Abdel-Nasser nationalised the Suez Canal. His move was provoked by an American and British decision not to finance the construction of the Aswan High Dam as they had promised, to punish Egypt for its rapprochement with the communist bloc. The result was the Suez War that started on 29 October 1956 and in which British, French, and Israeli troops attacked Egypt. International pressure, however, forced the invading forces to withdraw. Ever since, the Suez Canal has been under full Egyptian control.

The Canal was closed twice: the first time for a short period after the Suez War in 1956, and the second in June 1967 following the Six-Day War between Egypt and Israel, which ended with Israel occupying the Sinai Peninsula up to the eastern bank of the Suez Canal. 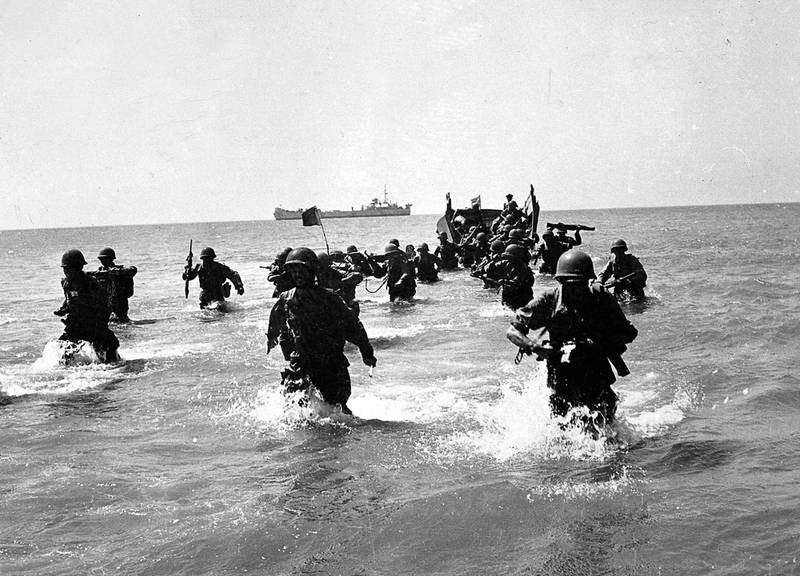 For six years the Israelis were stationed on the east bank and the Egyptians on the west, exchanging gunfire and attacks. Egyptian humiliation at losing the Sinai was only be wiped off with their legendary crossing of the Canal on 6 October 1973, when they extended bridges on the water and brought down the ‘invincible’ Israeli-built Bar Lev Line fortification with water cannons. The October War battles brought the Egyptians back into Sinai on the east bank of the Suez Canal, and led to the peace treaty with Israel in 1979 whereby Egypt regained the Sinai in full.

The Suez Canal was reopened by President Anwar al-Sadat on 5 June 1975 when peace reigned in the area.

The memories and sufferings of the construction of the Suez Canal and its tumultuous history remain in the minds and hearts of Egyptians, who have told its story in literature and in film. The Suez War, the war of attrition that followed the Six Day War, and the October War have all been rich material for great cultural works. Among the most moving films about the misery of digging the Suez Canal was the 1979 film Shafiqa and Metwalli, a realistic expression of the suffering and agony of the Egyptians forced into labour to make the Canal see light. 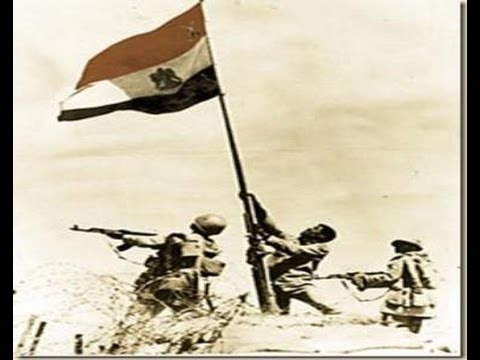