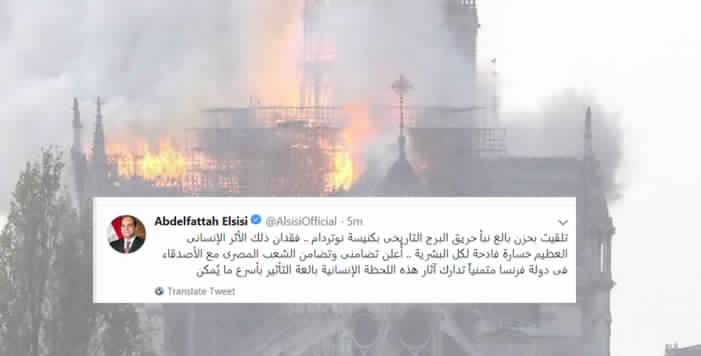 Egypt has expressed deep grief on account of the fire which erupted at the Notre Dame Cathedral in Paris yesterday 15 April, and which destroyed the roof and spectacular Gothic spire of the 850-year-old UNESCO world heritage landmark.

“I was very saddened to hear of the fire at the historical Notre Dame Cathedral in Paris,” Egypt’s President Abdel-Fatah al-Sisi tweeted. “The loss of that great building is a grave loss for all mankind.”

President Sisi announced his solidarity and that of the Egyptian people with the people of France, hoping that the damage to the iconic Cathedral could be repaired.

In a statement, Egypt’s Foreign Ministry expressed “great sorrow and pain” over the fire, and said the Notre Dame represented “historical and cultural value” not only for France, but for world heritage.

For his part, the Coptic Orthodox Patriarch Pope Tawadros II said: “The loss is huge for all humanity; Paris’s Notre Dame is of momentous historical value, and remains among the most important landmarks in the world.

“We pray to the Lord to grant wisdom and aid to the French government in dealing with the consequences of this painful incident, and to preserve all countries in the world in peace and security,” Pope Tawadros said.

As representative and spokesperson for the Coptic Catholic Church in Egypt, Fr Hany Bakhoum expressed the Church’s sorrow and grief over the fire that hit the Notre Dame Cathedral in Paris. In a statement, he stressed that the great historic cultural edifice belongs to all humanity.

The Evangelical Church in Egypt also declared in a statement that it shared the sorrow of the French people for the loss of their iconic Notre Dame of Paris, and prayed for peace for the whole world.

Copts were especially relieved to know that the Crown of Thorns of Jesus the Lord and the Nails with which He was crucified, in addition to all the sacred relics at the Notre Dame had escaped damage. Egyptians are closely following news of rebuilding the Cathedral and the donations that are flowing in for that purpose. 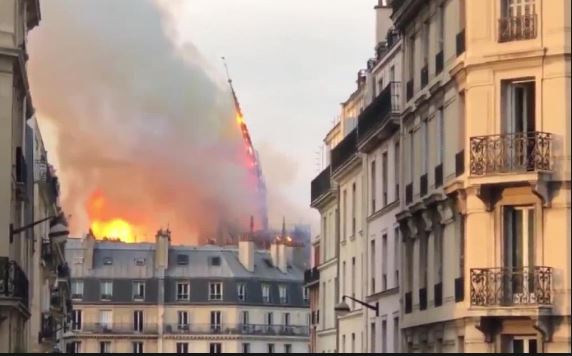