In Egypt, 1 June came with the traditional annual celebrations of the Feast of the Entry of the Holy Family into Egypt.

The thoroughly Egyptian occasion was marked in Coptic churches all over Egypt with Vespers service on the eve of the feast and Mass the following day.

The official celebration of the Holy Family in Egypt was held at the 5th century church of St Sergius and St Bacchus, famous as Abu-Serga, the Church of the Cavern, since it was built above a cavern in which, according to tradition, the Holy Family spent some three months on its journey in Egypt. 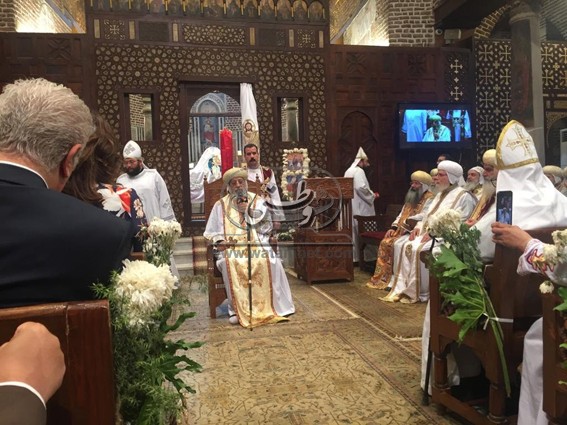 Pope Tawadros presided over Mass at Abu-Serga’s; he was joined by Anba Yulius, Bishop of Old Cairo, as well as a number of bishops and priests. The Pope baptised two babies, and in his sermon said that the Coptic Church has been founded on three phenomenal bases: the prophesy in Isaiah 19: 19 that there would be an altar in the midst of the land of Egypt, the Holy Family’s visit to Egypt, and St Mark the Apostle who preached Christianity to the Egyptians. 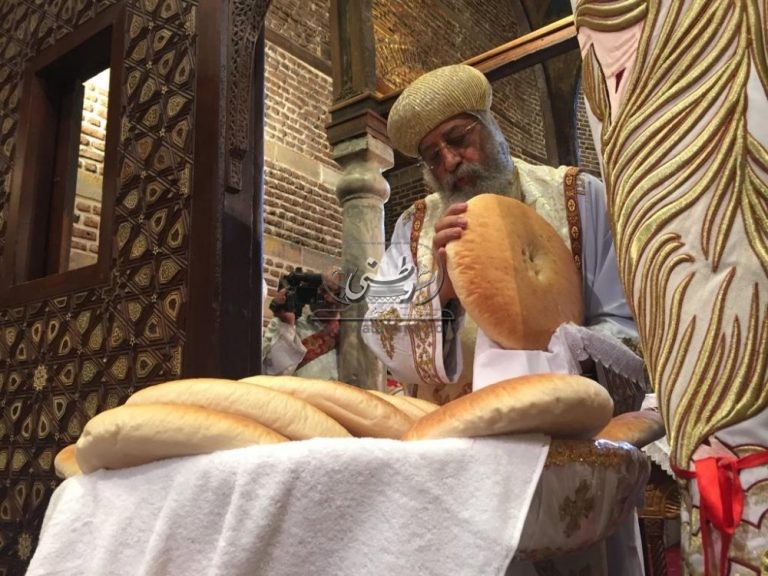 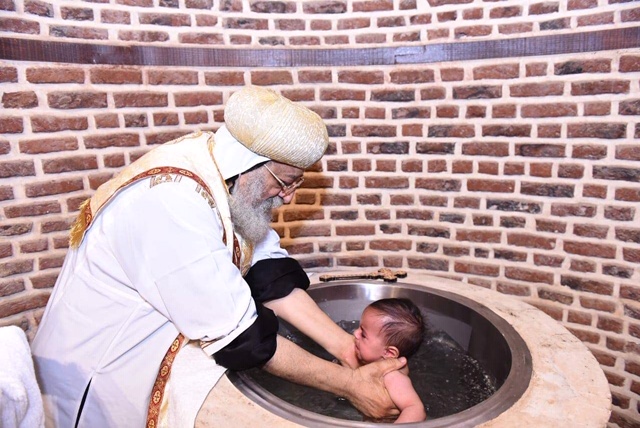 Anba Yulius gave a word in which he thanked Pope Tawadros and gave a brief history of the church. He then presented the Pope with a reproduction of the 18th-century icon of the Holy Family for which the church is famous. 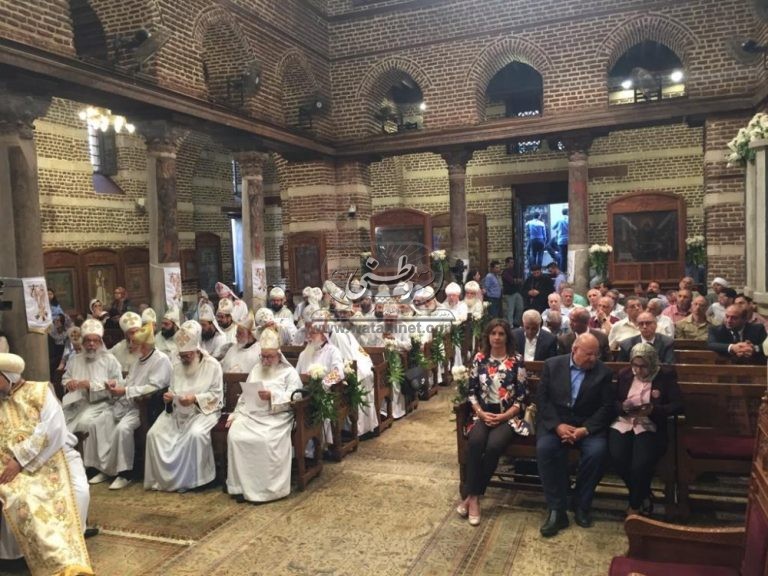 The official celebration featured a number of State officials including Nabila Makram, Minister of State for Emigration and Expatriate Egyptian Affairs; and Gamal Mustafa, Head of the Islamic, Coptic, and Jewish Antiquities Sector at the Ministry of Antiquities. Also attending were officials from the Ministries of Interior and Local Development. Dr Mustafa stressed that the Antiquities Ministry was working to document the sites trodden by the Holy Family, and to have them listed by UNESCO as World Heritage Sites. He said the Ministry had shared in the renovation of several of these sites from Wadi al-Natroun north to Assiut’s al-Muharraq Monastery south. 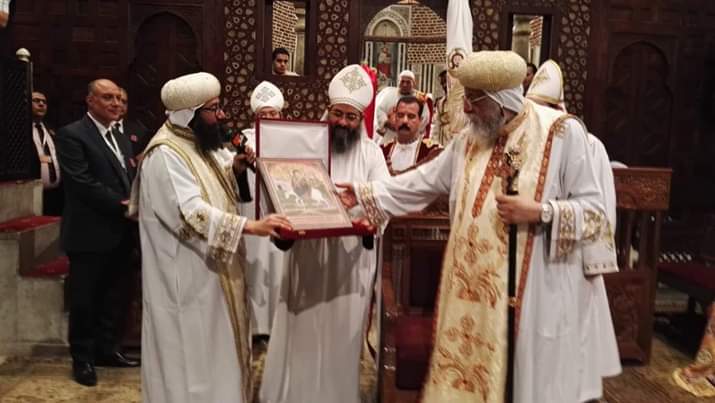 The church of the Holy Virgin in Maadi occupies a spectacular spot on the eastern Nile bank in Cairo, and is built on the site where the Holy Family is believed to have boarded a boat and headed south to Upper Egypt. The church is famous for a 1976 miracle, when a large open book was sighted floating on the Nile water in front of the church. The book was retrieved; it was a Bible open on the page at Isaiah 19: 25 “Blessed be Egypt my People”. Known as the Floating Bible, it is now on permanent display in a glass case reliquary at the church, open on the same page in Isaiah. 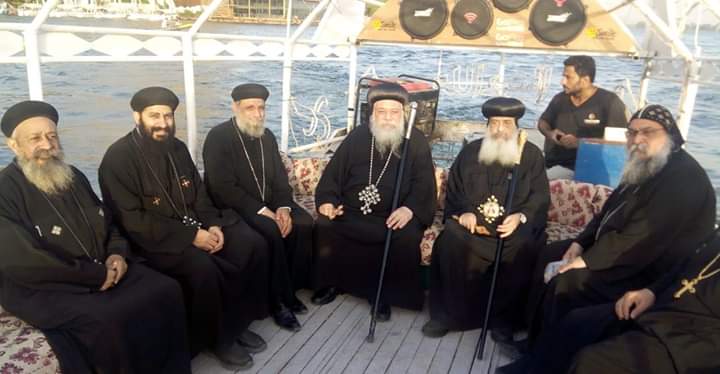 For more than 40 years now, the Maadi church has witnessed an annual celebration of the Holy Family feast, which follows a specific ritual. On the eve of 1 June, Anba Danial, Bishop of Maadi, was joined by Anba Demetrius, Bishop of Mallawi, and a number of priests and deacons singing praises as they sailed in a boat that approached the Nile bank on which the church of the Holy Virgin is situated. Once they reached the church, they disembarked and walked in a procession along a passageway that leads from the river bank to the church courtyard above. 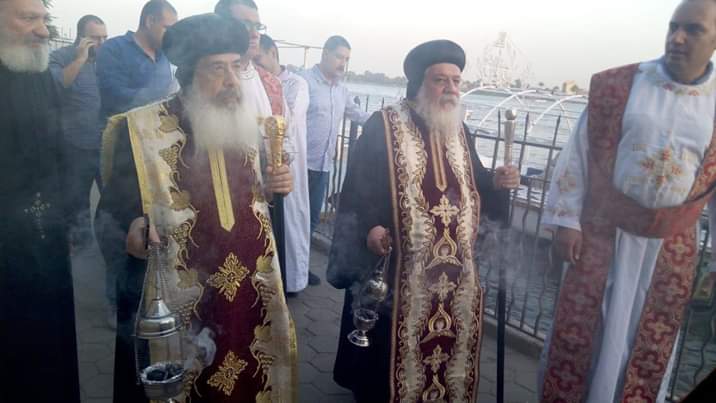 An altar was set up in the courtyard; Vespers service was held with the Bishops raising incense before the Holy Family icon and the Floating Bible. The following morning, Bishop Danial said Mass on the courtyard altar.

The 4th-century church of the Holy Virgin in Haret Zweila is located in Fatimid Cairo; the Fatimids were Shia caliphs who ruled Egypt from 969 to 1171. The church is built on yet another spot where the Holy Family had stayed during its flight into Egypt.

This year, the church celebrated the Holy Family’s Entry into Egypt during Vespers service on the eve of the feast. 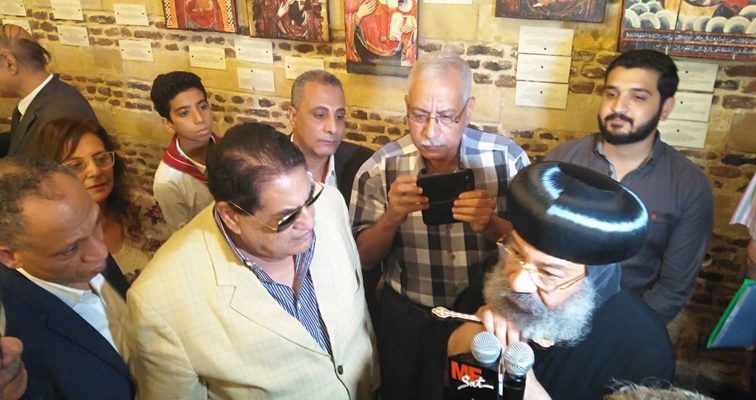 Anba Raphail, Bishop of Downtown Cairo churches, presided over the ceremony. Once he arrived, he was received by the church’s Boy Scout drummers who led him into the church. A choir sang Coptic hymns and national songs, while a short scene was performed depicting St Mary on a donkey carrying Baby Jesus, and St Joseph leading them on. Anba Raphail opened an exhibition of rare icons of the Holy Family in Egypt. 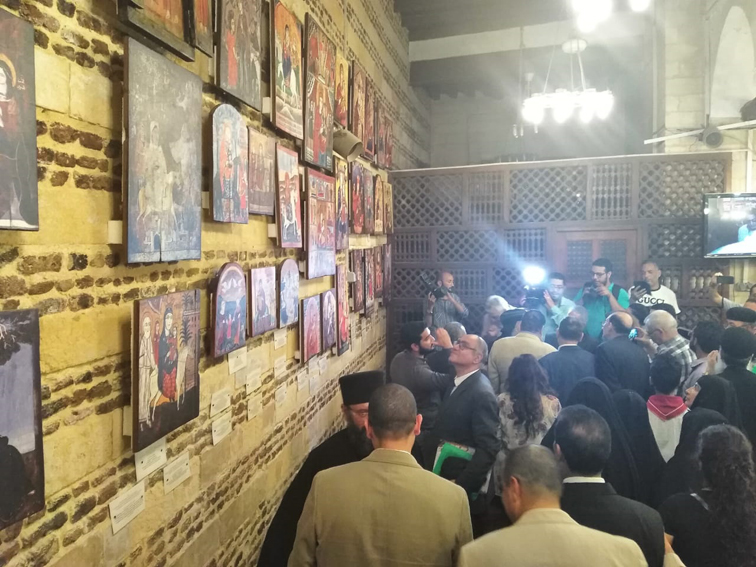 Participating in the event were officials, politicians, and intellectuals among whom was the liberal writer Fatima Naoot who called for the Feast of the Entry of the Holy Family into Egypt to be assigned a national day.

Perched atop Gabal al-Teir (Mountain of the Birds), Minya, some 230km south of Cairo, the monastery of the Holy Virgin with its 4th- century cave church started its annual celebration which customarily extends over the ten days that conclude on Ascension Day which this year coincided with 6 June. Mass was held twice a day; Anba Pavnotius, Metropolitan of Samalout, presided over the first Mass. The evenings were dominated with prayer and praise ceremonies in which the congregation joyfully participated. 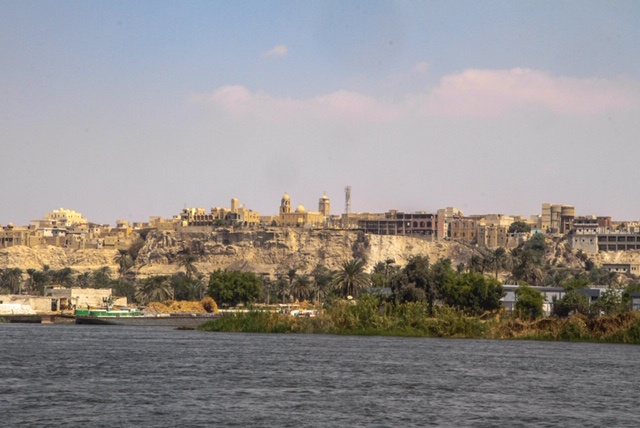 Accompanying the religious event is a mulid, a folk celebration in which the people engage in a festive fair-like atmosphere of socialising, feasting, singing, buying and selling, tattooing crosses, and suchlike. The mulid is a thoroughly Egyptian tradition that goes back to ancient Egypt, and is today practiced by all, Muslims as well as Copts. The mulid at Gabal al-Teir is a hugely popular event; thousands converge on the spot to enjoy the festivities and the cool summer evening air atop the mountain. 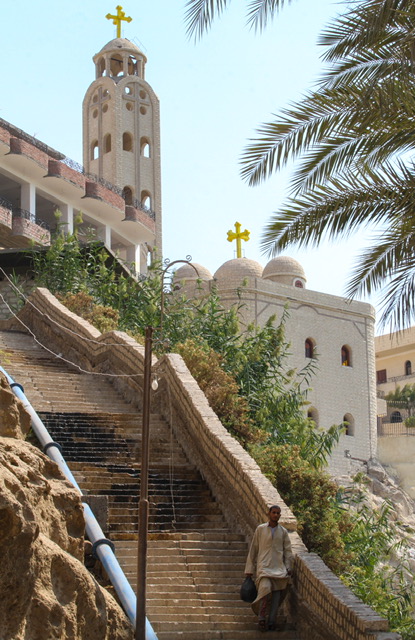 Other churches which hold relics of the Holy Family’s Biblical journey displayed them to the congregation. In Egypt’s north Delta region, another 4th-century church located in Sakha celebrated the Holy Family in Egypt. Sakha is famous as a spot among those trodden by the Holy Family, and boasts a relic rock which carries the imprint of the foot of Jesus. Anba Marcos, Bishop of Dumyat (Damietta) and Superior Father of St Demiana Convent, presided over Mass at the ancient church of the Holy Virgin in Sakha, and held the rock up for all to see. 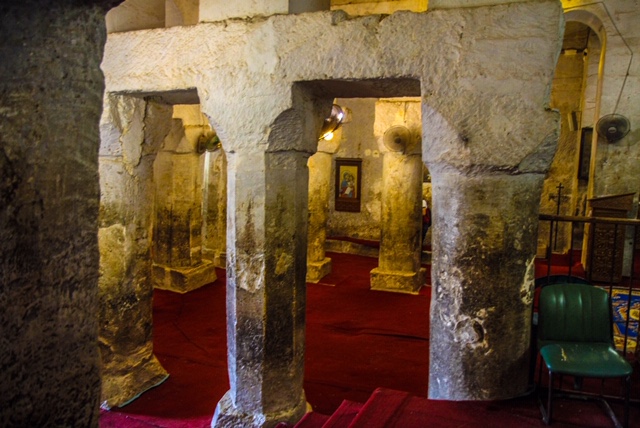 Not to be left out of the celebrations, the Coptic Museum in Old Cairo held its own exhibition to honour the Feast of the Entry of the Holy Family into Egypt. 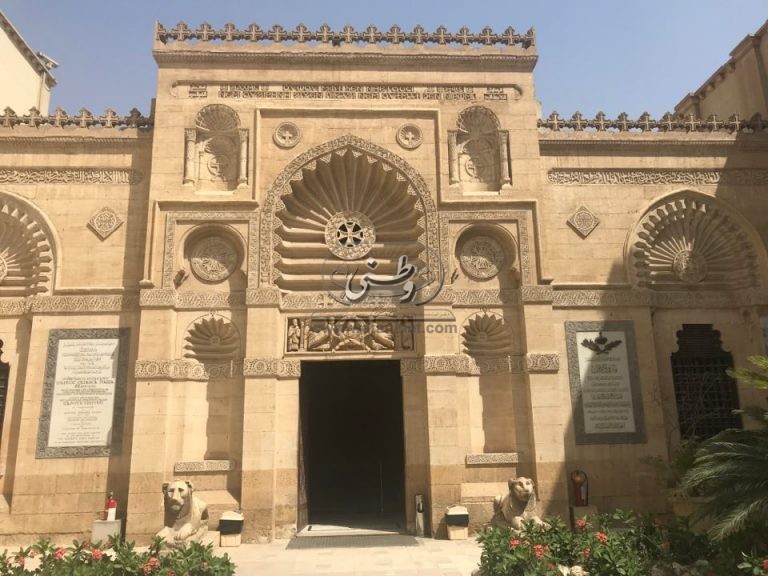 An event was held on the morning of Sunday 2 June, which was attended by Gihan Atta, curator of the museum; Samy Sabry, Dean of the Institute of Coptic Studies (ICS); and Ishaq Agban, Head of the History Department at the ICS. The event opened with the national anthem, after which Ms Atta gave a word to welcome the attendants. She said the trail and relics of the Holy Family in Egypt were treasures that enrich all Egyptians, Muslims as well as Copts. 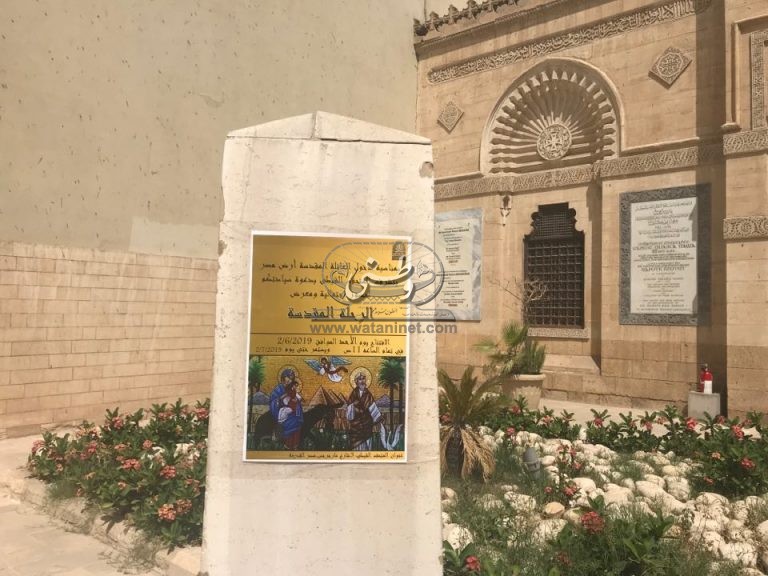 Father Saleeb Gamal, priest of the church of Abu-Seifein (St Mercurius) in Old Cairo, cut the ribbon to open the exhibition. The museum had gathered for display an impressive collection of its icons, manuscripts, and Coptic textiles, all pertaining to the Holy Family’s journey in Egypt. 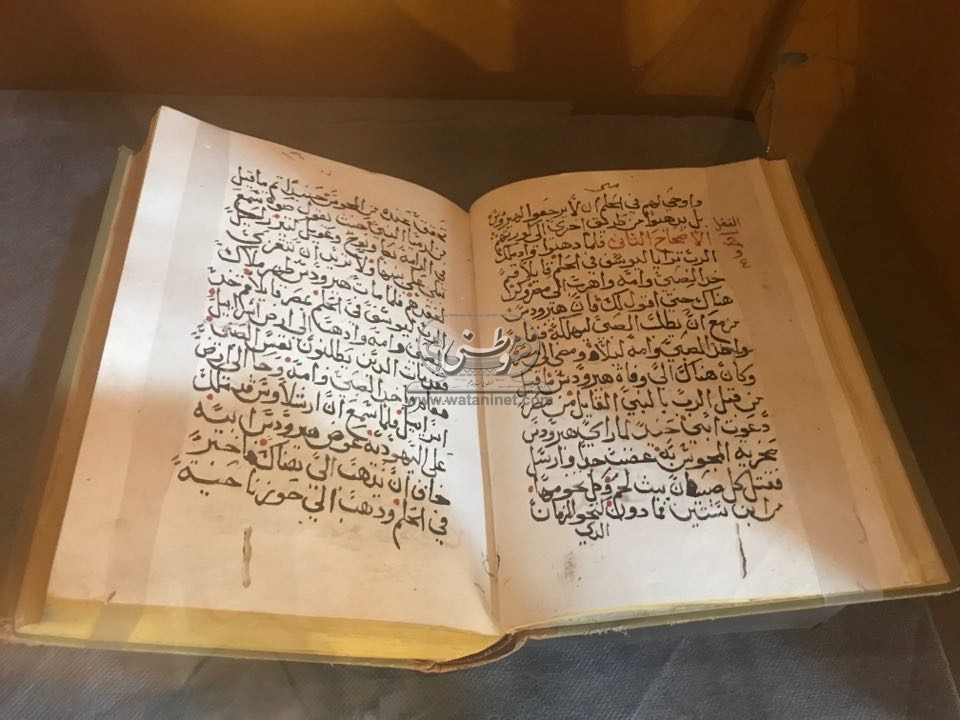 Another exhibition was also opened for the works of the young iconographer Bishoy Rifaat of the ICS, who depicted scenes of the lives of St Mary and the Holy Family, starting with the Annunciation and on to the nativity of Christ, until the flight to Egypt. 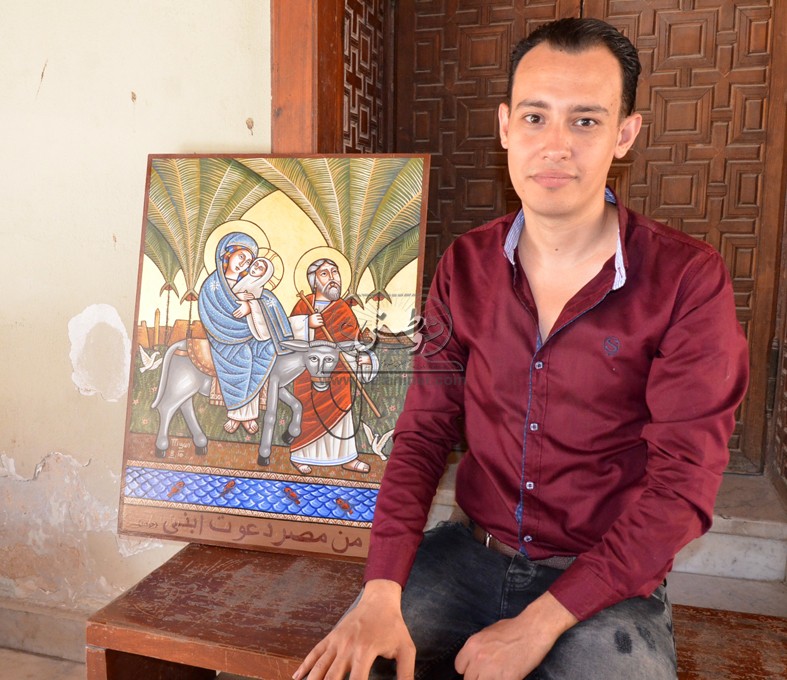 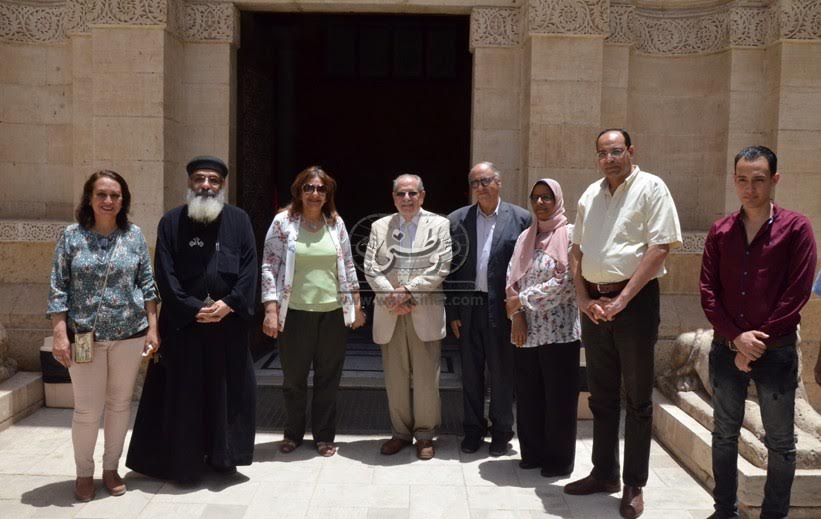 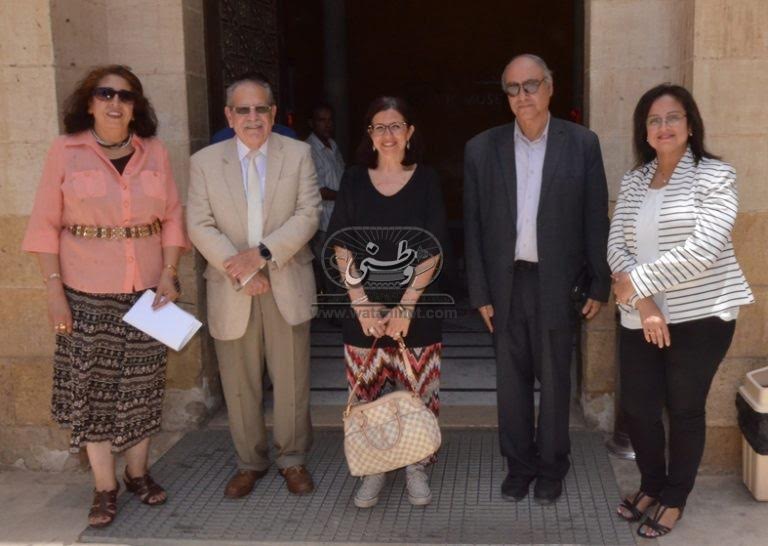