Last week saw political tensions in Cairo rise as, for the 17th time in three years, a tripartite ministerial meeting was held between Egypt, Sudan, and Ethiopia and failed to reach agreement on the preliminary studies report on the regional impact of the Grand Ethiopian Renaissance Dam.

For Egypt: Life or death
The Renaissance dam is built on the Blue Nile, the tributary that flows from the Ethiopian highlands down to the main river course, bearing the waters of the annual Nile flood that water and feed Egypt; the Blue Nile provides some 60 per cent of Egypt’s annual water supply. As such, and given that the country has no water source to speak of other than the Nile which carries more than 95 per cent of its water and is thus the country’s virtual lifeblood—the Ethiopian dam stands to threaten Egypt’s very existence. As President Abdel-Fattah al-Sisi said: The Nile waters are for Ethiopia a means of development; for Egypt they are a matter of life or death.
Agreements that go back to 1929 and 1959 regulate water quotas for the downstream countries; Egypt’s share is 55.5 billion out of a total 88 billion cubic metres of Nile waters. Even so, Egypt’s is already one of the lowest per capita water shares in the world, some 660 cubic metres a person. Other Nile countries claim the agreements are unfair to their own growing populations, but the fact remains that all the other riparian countries get significant rainfall whereas Egypt is the only country totally dependent on the Nile for its water needs.

Crucial: filling the reservoir
The over 6,000-megawatt Grand Renaissance Dam, slated for completion this year or early next year has been described by Ethiopia as set to make the country the largest hydroelectric power plant in Africa.
Ethiopia insists the dam would have no negative impact on Egypt or Sudan, but has submitted no evidence of such an allegation.
The Renaissance Dam is a fait accompli, and Egypt has been hoping to reach an agreement on filling its huge 74 billion cu.m. reservoir, and managing the flow.
Given that the dam is planned for hydroelectric power generation not for irrigation, the water flow downstream would go back to normal once the reservoir is full. But until that happens, a lot depends on the period during which the reservoir would be filled. If the filling is done throughout a prolonged period of time, damage to Egypt could be minimal, since the amount of water blocked from the downstream country would be sustainable. But a faster fill could spell disaster, since it would block substantial water quantities from flowing into Egypt.
The situation is complicated, however, by Ethiopia’s secretiveness and its refusal to share information on the dam.

Concerns over delays
In a 2015 Declaration of Principles agreement, Egypt, Ethiopia and Sudan agreed to contract an independent study of the dam’s impact and abide by it as they agree on a plan for filling the reservoir and operating the dam. But the deadline to complete the study has passed, and it has hardly begun, held up by differences over Ethiopians refusal of information sharing and transparency despite the multiple rounds of negotiations, the most recent being the 17th, held last week.
According to Egypt’s Minister of Irrigation and Water Resources, Muhammad Abdel-Ati, the focus of the recent tripartite meeting was the introductory report on planned technical studies of the dam’s potential impact on Egypt and Sudan. The studies, which will be carried out by two French firms, Arterlia and BRL, were scheduled to start late 2016, but required an agreement on methods from the three governments before they could begin. Egypt approved the initial report last Sunday, 12 November 2017, but Ethiopia and Sudan demanded major amendments to the proposed studies.
Egypt had repeatedly expressed concerns over ongoing delays in the approval of the technical studies given that Ethiopia is in the meantime proceeding with the construction the dam, which started in 2011.

What will Egypt do?
Egyptians have been vocal about their disillusionment with the Ethiopian intransigence. Official sources complain that in every one of these meetings Egypt showed the utmost patience, flexibility, and good will, but the Ethiopians have been intransigent, and non-cooperative. The refused to give information needed for the technical studies to proceed, and have flagrantly played for time as they went on building the dam.
Former Irrigation Minister and head of the Arab Water Council Mahmoud Abu-Zeid, said that the Ethiopian side rejects the most basic line: Egypt’s right to the water quota it was allotted through the 1929 and 1959 agreements. Experts say that in doing so, Ethiopia flagrantly violates the principles of the Organisation of African Unity, which stipulate that treaties and agreements concluded during colonial times remain in force.
It is not clear how Egypt plans to deal with the situation. There has been talk by officials that the Nile water, the country’s lifeblood, is a national security issue and Egypt will deal with the situation accordingly.
Hany Raslan, vice head of the al-Ahram Centre for Strategic Studies, suggested that a summit should be held among the presidents of the three riparian States which the Renaissance Dam directly affects: Ethiopia, Sudan, and Egypt, to resolve the issue. Other suggestions focused on mobilising international efforts to pressure Ethiopia into accepting cooperation.
There have been calls in the Egyptian media for Egypt to ask for the support of the international community, or to take the case to the UN Security Council, seeing that the threat in question concerns Egypt’s national security and its very life.

Water security
On Saturday 18 November, President Sisi assured Egyptians that: “No one can infringe on Egypt’s water security”. But he also warned Egyptians that they had to use water in a rational manner, saying that rice cultivation is rationed by the government on account of its consumption of huge amounts of water, and asked Egyptian growers to abide by the official quotas in order to save precious water. “Violating these quotas,” he said, “also infringes on our water security.”

++Watani++ has extensively covered the issue of the Grand Ethiopian Renaissance Dam:

The dam that Ethiopia builds

Ethiopia’s designs on the Nile 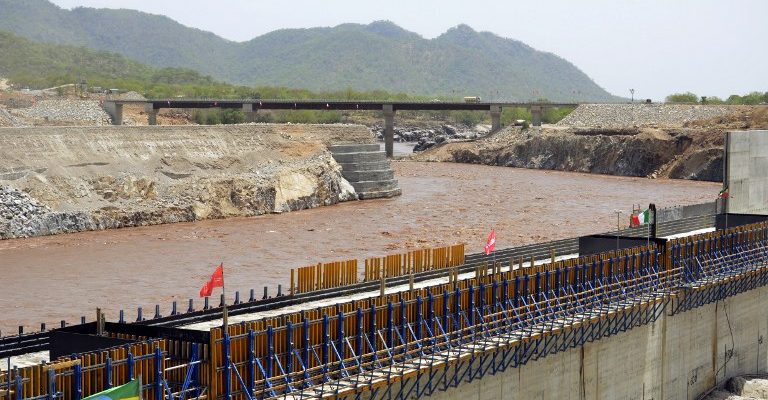