Let there be peace

His Holiness Pope Shenouda III, the 117th Patriarch of the Coptic Orthodox Church, spoke of religious peace through mutual understanding on Thursday 23 August as he received an

His Holiness Pope Shenouda III, the 117th Patriarch of the Coptic Orthodox Church, spoke of religious peace through mutual understanding on Thursday 23 August as he received an honorary degree from Lawrence Technological University in Southfield.
The Pope spoke of the “many points of agreement” between human beings. “All of us agree on the existence of God, H.H. said, … all believe in certain morals, ethics and principles.” He said that by promoting understanding of one another’s religions and focusing on positives, believers of all faiths could live together conflict free.
Amid cheers and applause
The Pope and his message were received well by those who attended the ceremony. Many were members of St Mark’s Coptic Orthodox Church in Livernois, Troy, or the newer St Mary’s on the same site. The Pope visited both churches the previous day. For them, the visit of the 84-year-old patriarch was a wonderful event. He entered the room to cheers, applause and the lights of cameras and video recorders.
The ceremony began with the processional and welcome address by President Lewis N. Walker. Dr Walker said: “A respected tradition in higher education is to invite a member of the clergy whose ministry has touched the community of students, faculty, staff and alumni, to present the invocation.  And yet today, we have with us a man of faith with such extraordinary influence, that he impacts us all.”
Pope Shenouda III led the convocation in prayer, following which Dr Walker recognised the special guests, among whom was Consul General of Egypt, Ambassador Hoda Gouda, but “One who could not join us is Pope Shenouda’s friend, former President Jimmy Carter, who sends his best wishes,” Dr Walker said.
The Mayor of the City of Southfield, the Honourable Brenda Lawrence, next presented the Pope with the key to the city.
Mission of understanding
Dr Walker went on to answer a question which was on everybody’s mind: why a technological university was honouring a man of faith. “All the great technological achievements and advancements of our civilisation, he said, are for naught unless we as nations, as societies, and as individuals can find a way to live and thrive together in peace and understanding.”
Dr Walker said he had met Pope Shenouda III in Egypt last spring during a visit to develop new and exciting educational partnerships with Egyptian universities including Pope Shenouda’s alma mater, the Cairo University.  “I was greatly impressed by his interest in 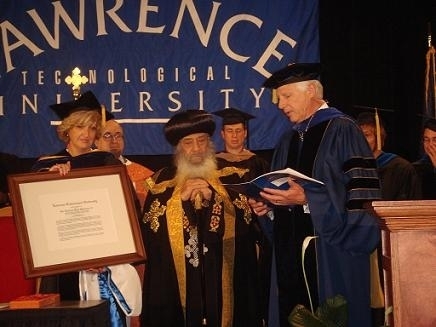 supporting higher education and of his mission of mutual understanding and peace.
“I seek to emphasise that he has been a steadfast man of faith and courage, a man who has reached out to both his friends and his adversaries in the quest for peace and better understanding.
“He has not always chosen the easy path.  He has known danger, detention, attempts to silence or dissuade.  Yet in each instance he has overcome the obstacles to his message of faith, understanding, progress, and good will.  He is a man worthy of our admiration and our respect.”
Doctor of Humanities
The honorary degree was conferred upon Pope Shenouda III as Dr Walker announced: “Your Holiness, the President and Trustees of Lawrence Technological University extend to you the highest honour that this University can bestow: The Degree of Doctor of Humanities.
Pope Shenouda III then delivered his speech and, after the audience joined in singing Let there be Peace, offered a benediction.
In the local newspaper Hometown Life staff writer Susan Steinmueller reported on the elation of the local Coptic congregation who attended the event.
“He is a very honourable, delightful man, and I am very happy to see him,” said Sherif Gendy, 30, of Madison Heights, who is studying for his US medical license.
Marina Essak, 17, and her brother Mina Essak, 14, of Lake Orion, said they had read many of the Pope’s books. They hoped his message of peace would make a difference.
For Mary Michail of Troy, the Pope’s visit had extra poignancy. Michail said when she was a girl in Egypt, the Pope appointed her father, the late Rev. Roufail Michail, to start the Troy church. “The Pope used to stay in their home during visits, she said. “He’s very warm, very compassionate, just filled with the Holy Spirit.”
The Pope is also known for his sense of humour. When Southfield Mayor Brenda Lawrence presented him with a key to the city, he thanked her saying, “I promise I will not open the city during your absence.”
BOX
The citation
The citation reads:
On the forefront of every realm of the human condition, there are those who seize opportunity

and chart a course for others to follow. As a servant of God and the esteemed leader of your ancient and revered church, as a scholar, a prolific author, a teacher, and shepherd, you have dedicated your life to the better understanding of our Creator and the tremendous potential of humankind.
In a region and in a world that cries out for understanding and tolerance, you have been a champion of reason. You have sought to bring together those with divergent viewpoints, to give voice to the unheard, a sense of accomplishment to the unrecognized, and hope to the unrepresented.  You have inspired many to use the power within them to achieve an education, to pursue success, and to serve their faith, their families, their professions, and their communities with good grace and distinction.
Most of all, you have used your authority, example, and natural gifts of persuasion and communication to be an extraordinary instrument of peace and goodwill.  Through this process you have provided the vision that sparks our imaginations, frees our spirits, and helps assure all that is good and just within our societies and, ultimately, in our hearts and in our actions as men and women of faith.
In recognition of your remarkable accomplishments, your inspirational leadership, and your service to humankind, Lawrence Technological University is proud to grant this degree, honoris causa, with all the rights, privileges, and honours thereunto pertaining.
This article was printed in Watani International on 2 September 2007
WATANI International
8 April 2012