The Coptic Orthodox Church has issued three declarations on violence against women, launching initiatives that confirm women’s right to family planning, protection from female genital mutilation (FGM), and zero tolerance of all forms of violence.

The declarations and initiatives were launched at an event that took place on 15 April at the Coptic Orthodox papal headquarters at St Mark’s Cathedral in Abbassiya. Pope Tawadros II presided over the event together with Anba Yulius, Bishop and director of the Bishopric of Public, Ecumenical, and Social Services (BLESS). 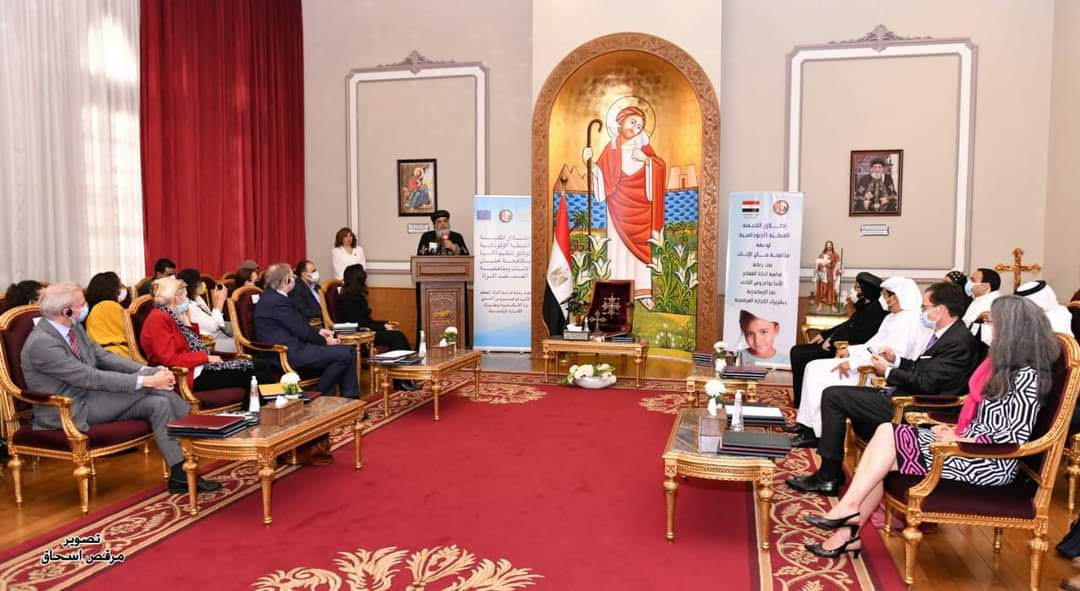 Participating in the event were representatives of the partners in the initiatives. There was President of the National Council for Women (NCW) Maya Morsy; and Secretary-General of the National Council for Childhood and Motherhood Sahar al-Sonbaty. There were also representatives of the funding partners: Head of the European Union Delegation to Egypt Ambassador Christian Berger; Head of Development and Business Cooperation at the Norwegian Embassy in Cairo Counsellor Arild Oksnevad; UNFPA Representative Frederika Meijer; as well as the French and UAE ambassadors to Cairo Stéphane Romatet and Hamed al-Shami.

The Coptic Church’s declaration on violence against women was headed with the Bible verse that addresses husbands in 1 Peter 3:7 “Giving honour unto the wife, as unto the weaker vessel, and as being heirs together of the grace of life; that your prayers be not hindered.” It went on to confirm that the Coptic Orthodox Church supports women’s right to a life free of all forms of violence.

“All human beings are God’s creation,” the declaration said, “and are equal in dignity.” It referenced the Bible verse in Genesis 2:18 “It is not good that the man should be alone; I will make him a helper comparable to him.” Also the verse from 1 Corinthians 11:11 “Nevertheless, neither is man independent of woman, nor woman independent of man in the Lord.” 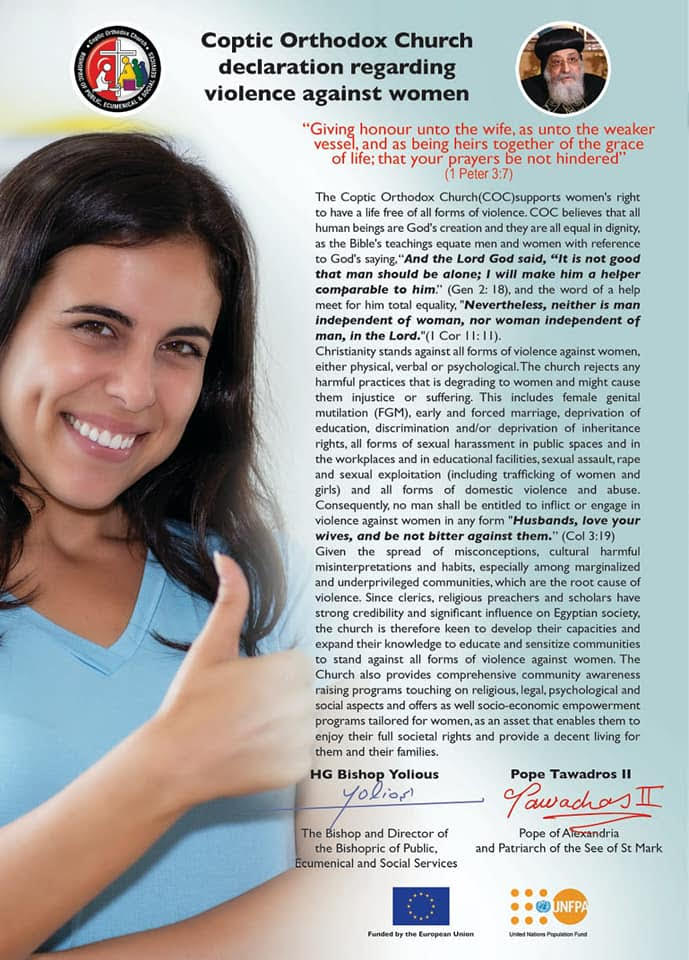 Christianity stands against all forms of violence against women, whether physical, verbal, or psychological, the declaration said, and the Church rejects all harmful practices that may bring upon women suffering or injustice. This includes FGM; early or forced marriage; depriving girls of education; discriminating against and/or dispossessing women of inheritance rights; sexual harassment in public places, workplaces, or education facilities; sexual assault; rape; sexual exploitation including trafficking of women or girls; as well as all forms of domestic violence or abuse. “No man is entitled to inflict or engage in violence against women in any form.”

The spread of misconceptions and cultural misinterpretations or customs, especially among the underprivileged, is the root cause of violence, according to the statement. “Since clerics, preachers, and religious scholars have strong credibility and significant influence on Egyptian society, the Church is keen to develop their capacities and expand their knowledge in order for them to educate communities and stand against all forms of discrimination against women.” The Church thus provides comprehensive community awareness programmes on religious, legal, psychological and social aspects of the issue; and offers socio-economic empowerment programmes for women to enable them to enjoy their full societal rights and provide decent living for them and their families.

The declaration was signed by Pope Tawadros and Bishop Yulius.

Pope Tawadros gave a word in which he explained the Church’s stance regarding women’s issues. He welcomed his guests and thanked them for their cooperation towards the common desire for women’s rights which he termed as an original human right. He said that women in the Christian faith are represented by the Holy Virgin who the Church lovingly denotes as the “pride of our [human] race”. 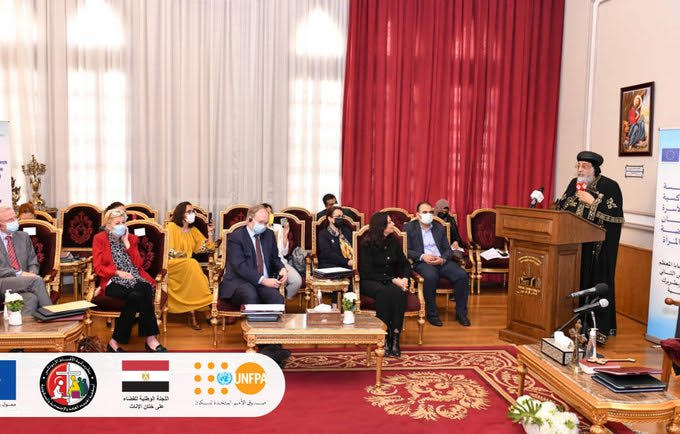 “The initiatives we launch today,” the Pope said, “are not new to our Church. We have always been calling and working for them.

“We reject violence in all its forms against girls and women of all ages.

“FGM is an alien practice that has invaded our society; it has absolutely no reference in our Church’s history. It is a crime and all parties involved in it should be punished.

“Family planning is part of planning for the entire community … We in Egypt are at a stage while population growth eats up all efforts at development. The Bible says in Sirach 16: ‘Desire not a multitude of unprofitable children, neither delight in ungodly sons. Though they multiply, rejoice not in them, except the fear of the Lord be with them. Trust not thou in their life, neither respect their multitude: for one that is just is better than a thousand; and better it is to die without children, than to have them that are ungodly’.”

In its declaration on family planning, the Coptic Orthodox Church recognised family planning as essential to confront the population problem, but it also clearly stipulated that family planning “should not harm the mother’s health, and should not be cause for killing the unborn child (abortion)”.

The declarations will be circulated among the public, and posted to around 120 churches.

President of NCW Maya Morsy spoke of the importance of collaboration with religious institutions in official quests for women’s rights. “The first question we are always asked is about the view of religion on whichever rights we call for, even though these rights are embedded in the law … The declarations issued today by the Church on these rights are historic, and confirm a religious leadership aware of and compassionate to women’s issues.

“Today”, Dr Morsy said, “we celebrate six years of partnership with the Church, working in different governorates and undertaking visits with outreach workers. This is a perfect example of national collaboration.”

The EU Support to Egypt’s National Population Strategy project aims to increase the use of voluntary, rights-based family planning, with the support of an EU-grant of 27 Million Euros, in cooperation with UNFPA.

For her part, Frederika Meijer stressed that “religion is an integral part of the sociocultural fabric of many communities.

“Religious leaders can dispel cultural misconceptions that are wrongly attributed to religion, and can shed light on the benefits of improved quality of life, the well-being of families and communities, improved maternal and new-borns’ health, reduced poverty and girls’ education,” she added.

Under the EU Support to Egypt’s National Population Strategy project, UNFPA partners have worked closely with faith-based organisations such as the Coptic BLESS and al-Azhar University’s International Islamic Centre for Population Studies and Research to engage religious leaders to amplify the project’s mandate among their communities. 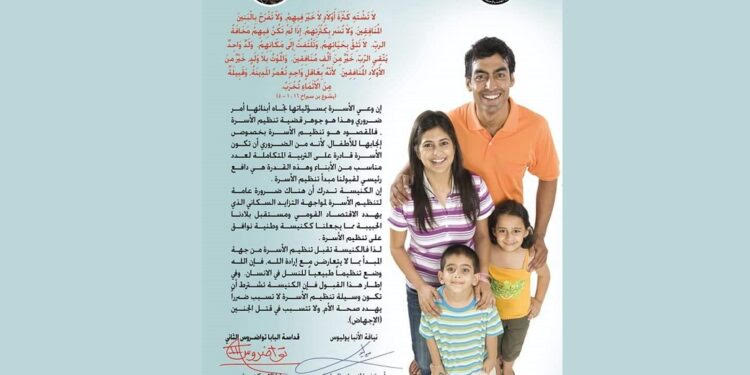 During the recent event, Ambassador Christian Berger lauded the outstanding commitment of Pope Tawadros and the diligent efforts of BLESS for the strong messages and actions to support family planning as well as to fight all forms of Violence Against Women in general and Female Genital Mutilation in particular.

“The European Union is committed to supporting the implementation of Egypt’s National Population Strategy through increasing awareness on family planning and population issues in support of Egypt’s Sustainable Development strategy,” he said. Ambassador Berger reiterated that the EU is one of the key supporters worldwide to combat Female Genital Mutilation and Violence Against Women. “I commend every significant effort exerted to combat all forms of violence against women in particular the ones led by the National Council for Women, Cabinet ministries, religious institutions in Egypt like the Coptic Church and Al Azhar, UN Organisations, and civil society for their avid commitment and strong actions towards an environment free from gender based violence.”

During the first three years of the project, around 4000 male and female both Muslim and Coptic religious leaders participated in different activities under the project, including 1000 reached by campaigns, over 800 participated in ToT workshops, resulting in the training of around 2000 other leaders, who ultimately reached 16,000 members of their communities.

In a pilot phase in 2020, 1000 community members in Cairo, Qalyoubiya and Assiut also engaged in the local carnivals organised by BLESS to discuss forms of violence against women and gender discrimination in the household. An estimate of 500 female members of the Women Community Clubs (in Aswan, Alexandria, Cairo, Minya, Beni Sweif and Sohag) attended handcrafts, awareness-raising discussions to learn about forms of domestic violence and empowerment for women subjected to forms of violence.

Over the past years, the EU has been committed to ending violence and harmful practices against women and girls in Egypt. Through the EU-funded bilateral cooperation projects with Egypt and in the framework of the UNFPA-UNICEF Joint Programme for Eliminating FGM, the EU has supported reinforced capacities of national and civil society partners to address various issues of gender-based violence. EU-funded actions have been implemented in partnership with different UN agencies and in close cooperation with national partners, including the National Committee for the Eradication of FGM.

Finally, it is good to be reminded that the focus of the initiatives of the Coptic Orthodox Church is women’s rights which as Pope Tawadros said, are basic human rights. Pope Tawadros reminds that FAMILY stands for Father And Mother I Love You.