On 26 July 2022, Minister of Tourism and Antiquities Khaled al-Anani was joined by Minister of Local Development Mahmoud Shaarawi and Minya Governor Usama al-Qadi in opening a newly developed spot on the trail of the Holy Family’s biblical flight into Egypt: the church of the Holy Virgin at Gabal al-Teir, literally Mountain of the Birds, in Minya. Out of some 25 sites all over Egypt traversed by the Holy Family, the Ministry has already developed four sites to prepare them to receive tourists: the sites at Samannoud, Sakha, Tell Basta, and Wadi al- Natroun. Dr Anani said that the State gave priority to the Holy Family Trail as a religious tourism destination, and was successively developing its sites. At Gabal al-Teir, he said, 500m of road leading to the site were paved with basalt and lined with trees, while ensuring that the site may be visited through several paved roads; signposts were installed as well as shaded benches for visitors to rest. Façades of the surrounding buildings were given a facelift to match the style of the church, a wall was built surrounding the nearby cemeteries and was adorned with reliefs depicting the Flight of the Holy family into Egypt. The entire site was was upgraded, and a two-floor reception area was built for tourists, including facilities and a cafeteria.

Minya governorate for its part has built a rest house for VIPs visiting the area.

The Diocese of Samalout, under the jurisdiction of which is Gabal al-Teir, has been a major partner in the restoration and development project. Watani talked to Anba Paphnutius (also written Pavnotius or Bevnotious), Metropolitan of Samalout, for details on Gabal al-Teir. 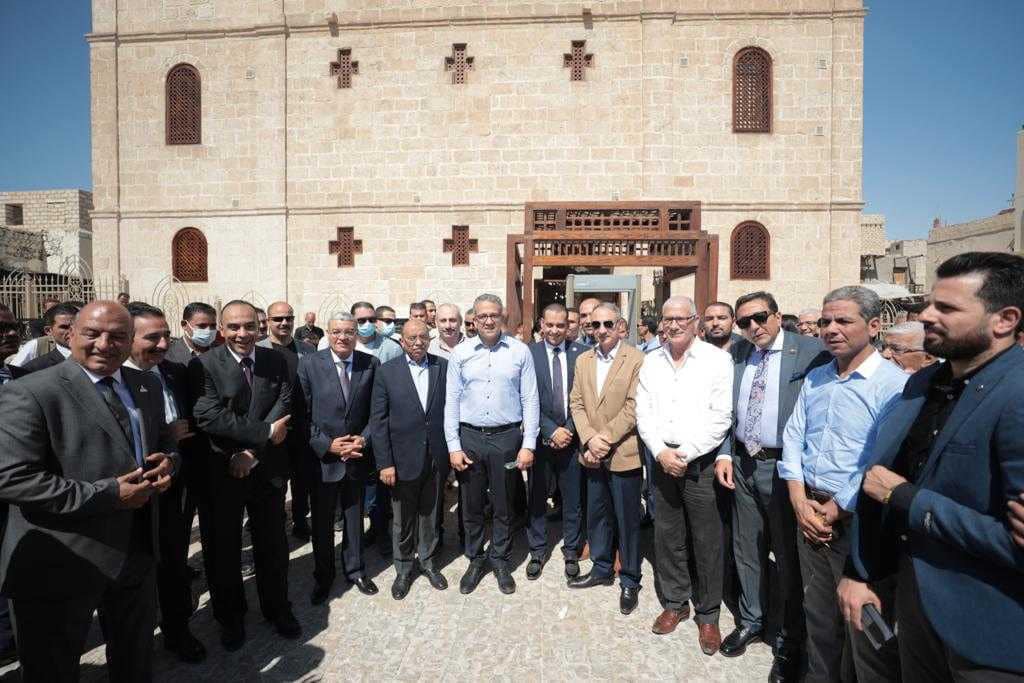 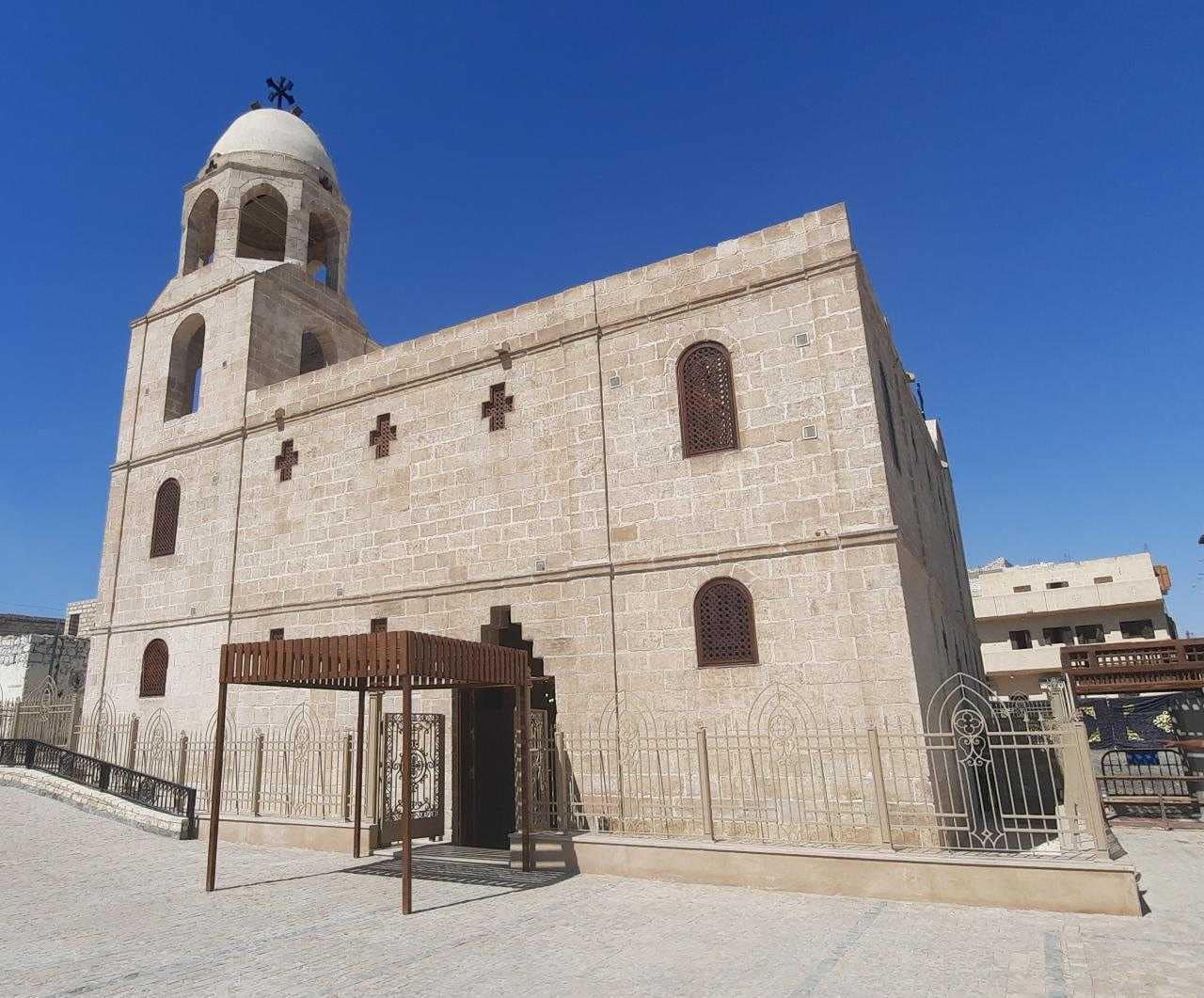 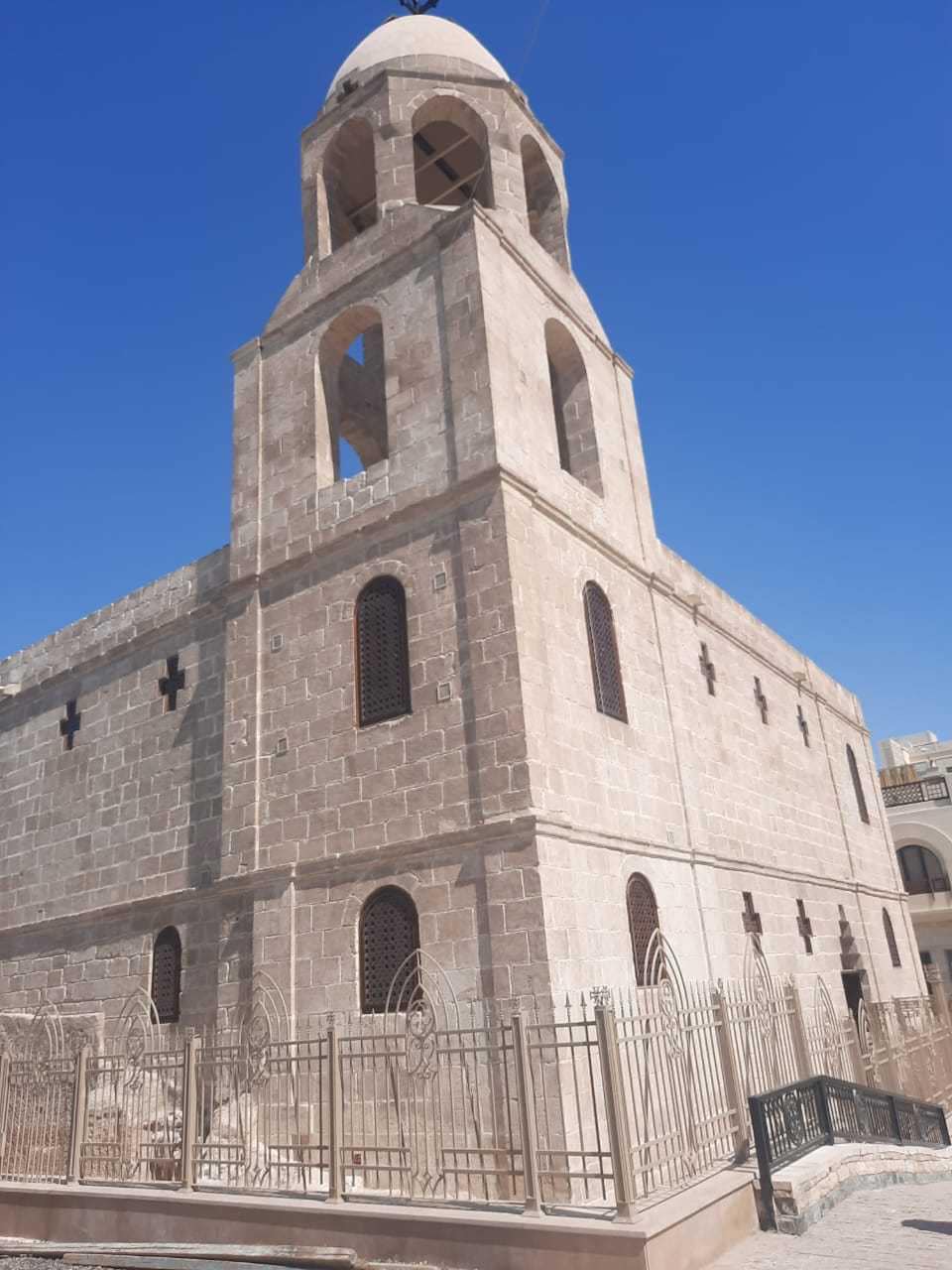 “We have turned our sight to religious tourism in Samalout,” Anba Paphnutius said. The diocese is home to a number of ancient sites, including the monastery of the Holy Virgin at Gabal al-Teir, one of the most important spots on the trail of the Holy Family’s biblical flight into Egypt. There is also the 6th-century church of Mar-Mina in the village of Tahal-Aameda, and the church of St Absakhairoun al-Qellini which was miraculously moved lock stock and barrel, including its well and the worshippers inside, in the 16th century during a time of persecution, from its original place in the village of Qellin in Kafr al-Sheikh, to its current location in the village of Behu in Samalout.

“These historic religious sites were renovated using state-of-the-art technology, and were equipped with tourist facilities. The modern facilities include a high-end hotel at Gabal al-Teir, and retreat hostels equipped with 400 beds, restaurants and souvenir shops,” Anba Paphnutius explained.

The hotel is located 21 km north of Minya city and 210 km south of Cairo. With its 40 modern furnished rooms—furnished by the Diocese’s carpentry workshops—the hotel proudly stands on the hill of Gabal al-Teir overlooking a spectacular view of the Nile and lush greenery, and is adjacent to the 4th-century church of Gabal al-Teir which houses the cave in which the Holy Family stayed for three days during their journey in Egypt. 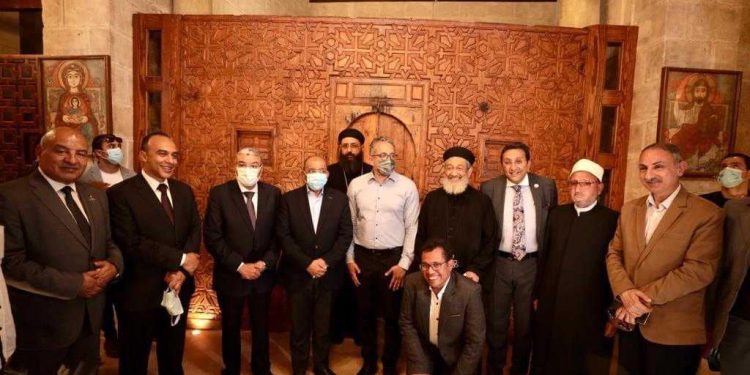 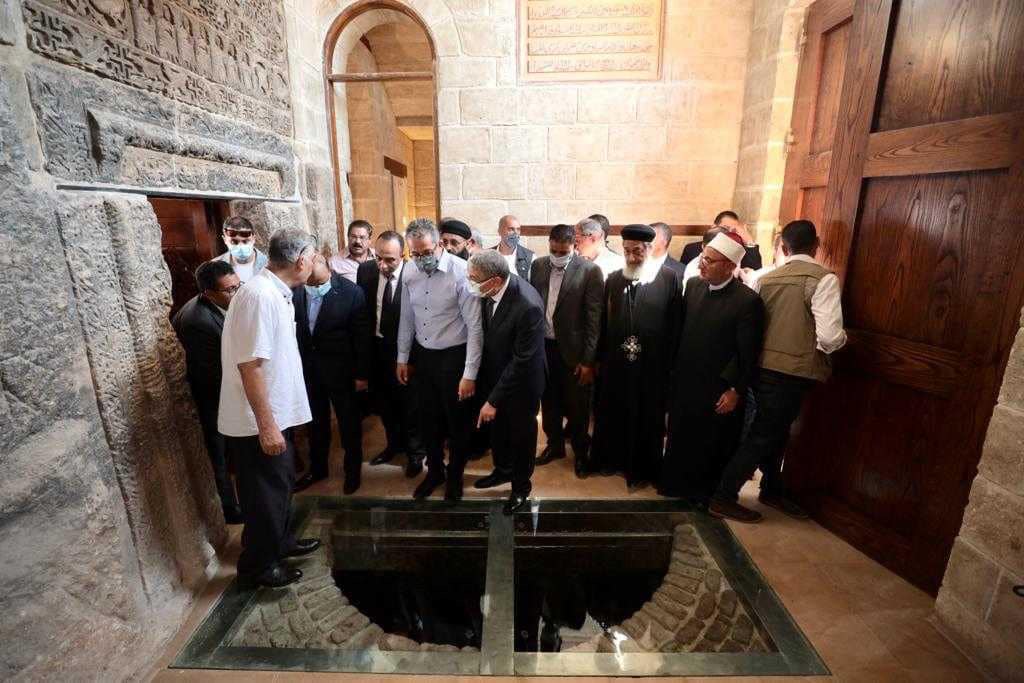 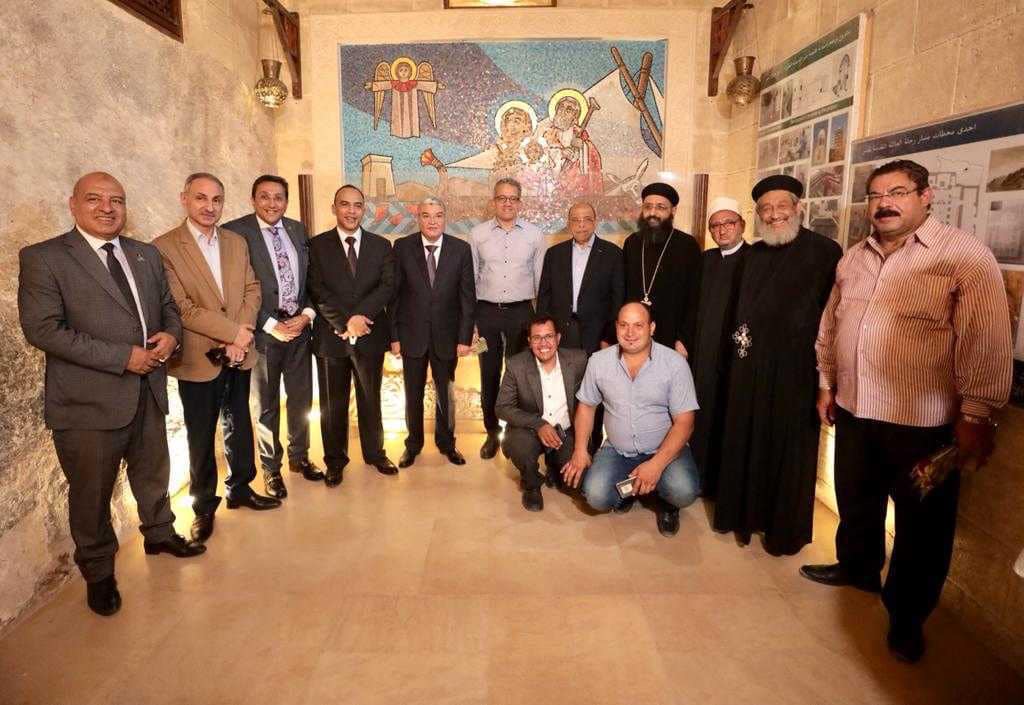 Anba Paphnutius insisted that “we should make use of the natural beauty of Gabal al-Teir, to promote religious tourism. The highlight of the site is the 4th-century rock-hewn church of the Holy Virgin, built on a high cliff east of the Nile and overlooking lush green fields on the banks of the Nile. The Nile at this spot is very wide, and includes a number of green islands. Altogether, the panorama inspires peace and fills the soul with beauty. It could attract tourists interested in heritage and religious tourism. He believes it is of extreme importance to encourage and train members of the local community in heritage handcrafts that would surely find a lucrative market with the expected tourist influx.

When the Holy Family arrived at the area more than 2000 years ago, they took refuge in a cave that lay within a deserted Roman temple, and remained there for three days. In 328AD Queen Helena, mother of Roman Emperor Constantine, was on a visit to Egypt to discover the sites trodden by the Holy Family. At Gabal al-Teir, she decided to use the remains of the temple, the rock-hewn pillars and walls, to turn it into a church by adding several architectural components. The ancient grotto where the Holy Family stayed is at the south of the church’s central altar. The church is sometimes referred to as the “Church of the Palm”, commemorating a miracle performed by the Christ Child who stretched His hand to prop a rock that was about to fall on the Holy Family as it passed that way; His palm was printed on the rock.

The nave is supported by 12 rock-hewn pillars, and the church is decorated with icons among which three—depicting the Holy Virgin, St George, and St Demiana—are by the renowned 16th-century iconographer Anastasi al-Rumi.

The original entrance to the church is above the Holy Family grotto, and was reached in ancient times by a large wooden box which visitors would get into while yet in the valley, and be pulled up by a pulley and rope. The place thus gained the name Monastery of the Pulley. 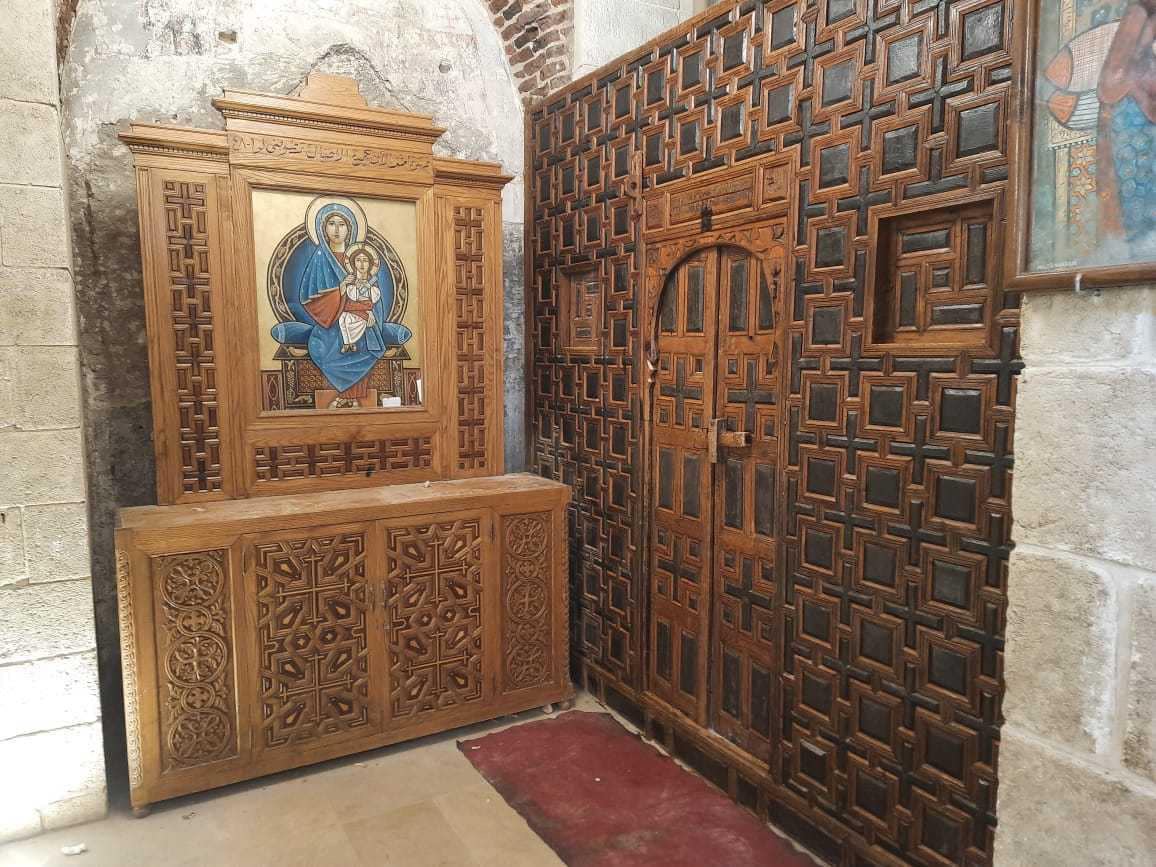 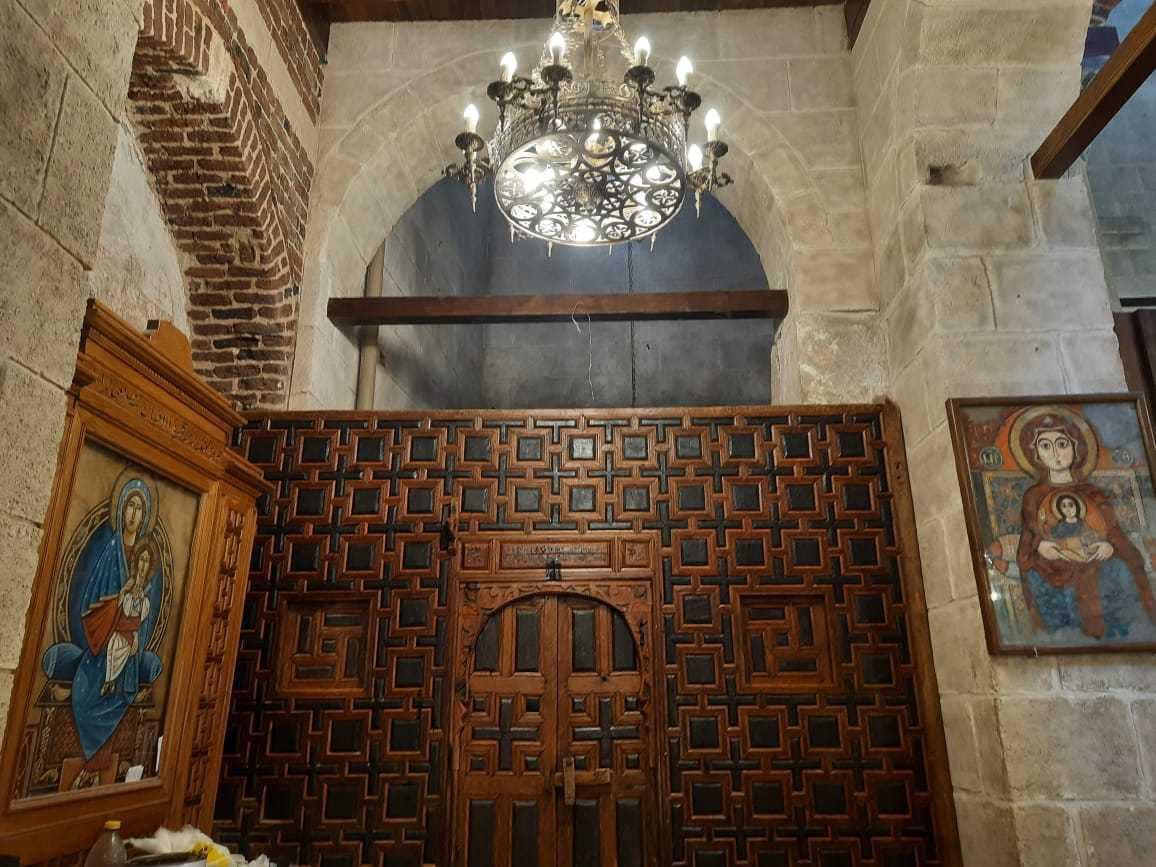 Watani asked Anba Paphnutius about the project to develop the Trail of the Holy Family in Egypt, including Gabal al-Teir, as a tourist destination.

“Egypt is the only place in the world other than Palestine to be visited by Christ,” he said. “The path trodden by the Holy Family in Egypt is a perfect candidate for religious tourism.

“I have visited Lourdes,” the Metropolitan said, “and was amazed at the great numbers of tourists who visit the site every day where the Holy Virgin appeared to a young woman. How much more, I thought, would they visit places where the Child Jesus, his mother Mary, and St Joseph stayed for over three years.”

“The path of the Holy Family’s flight in Egypt extends over 3500km in 25 spots. The State is keen to develop the points on this trail on the urban and tourist levels. Local communities stand to benefit from such development. 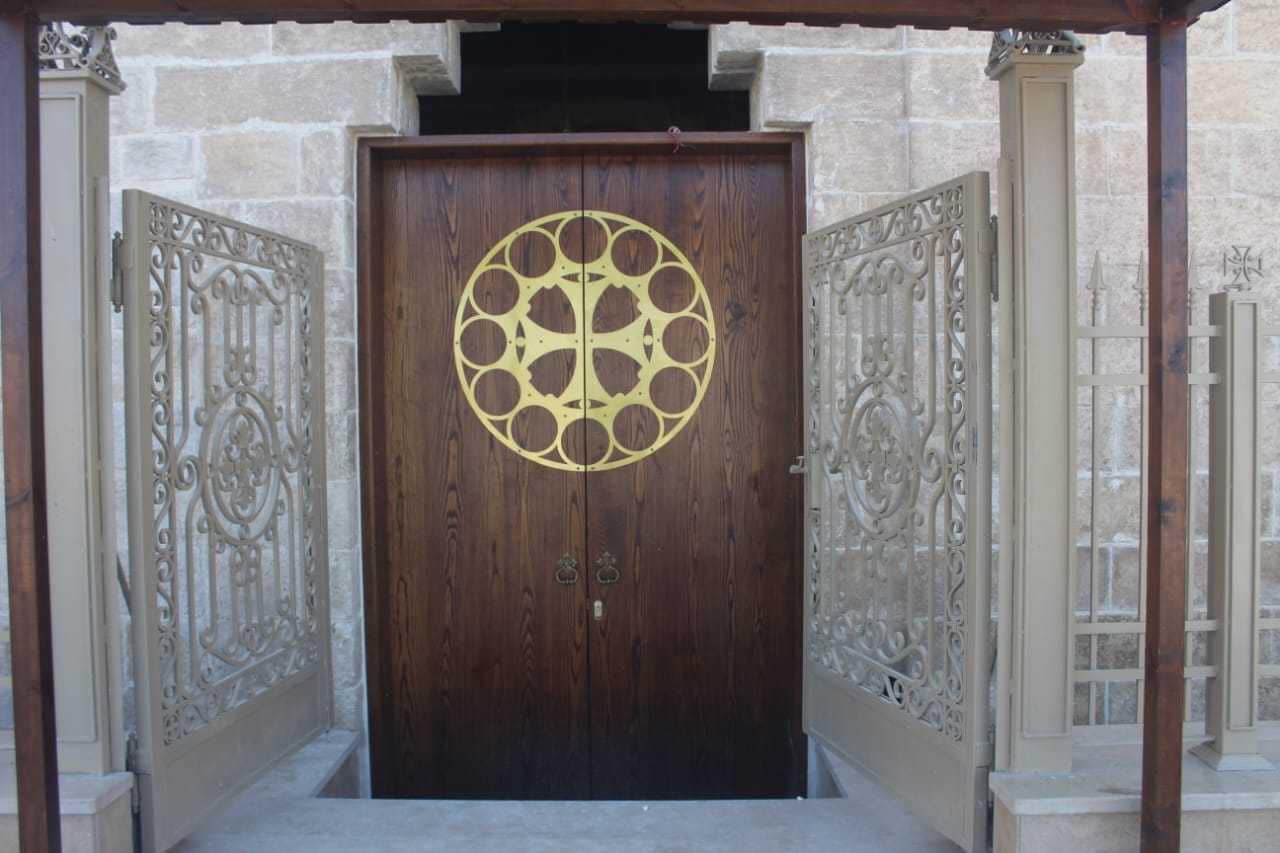 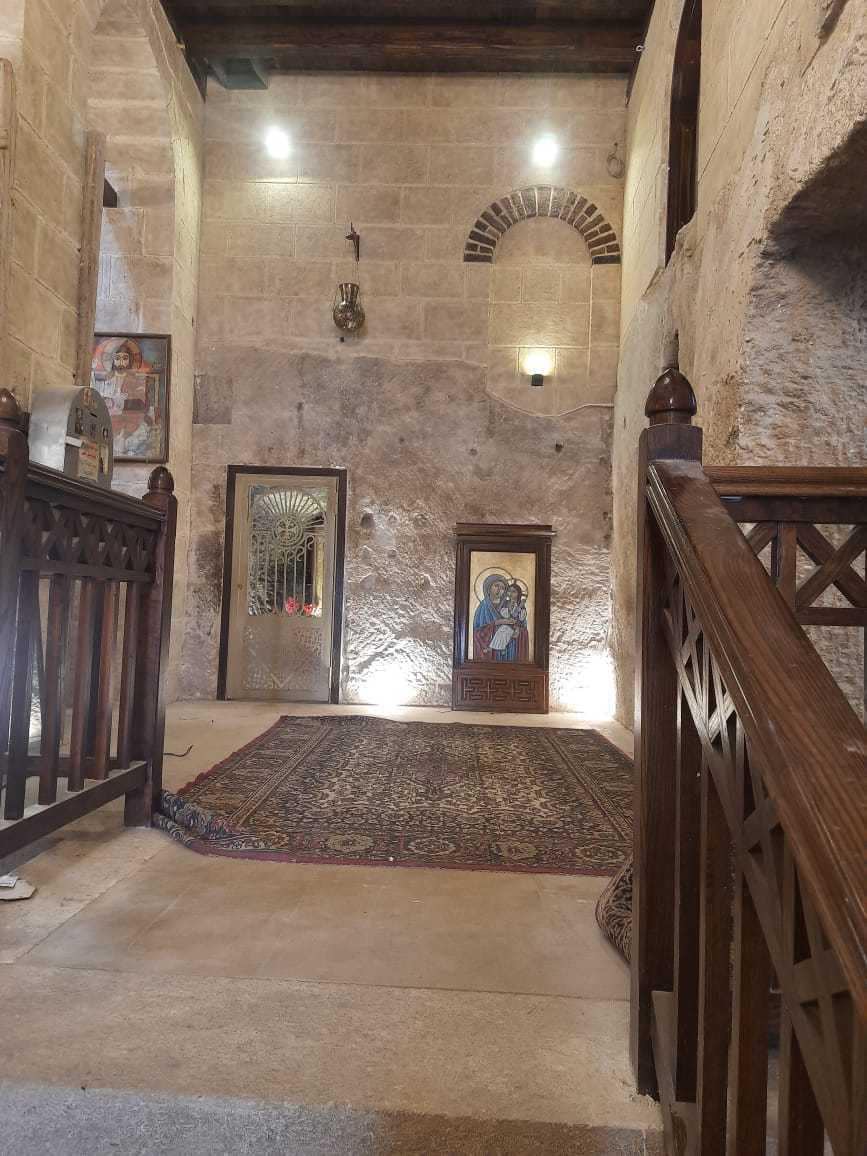 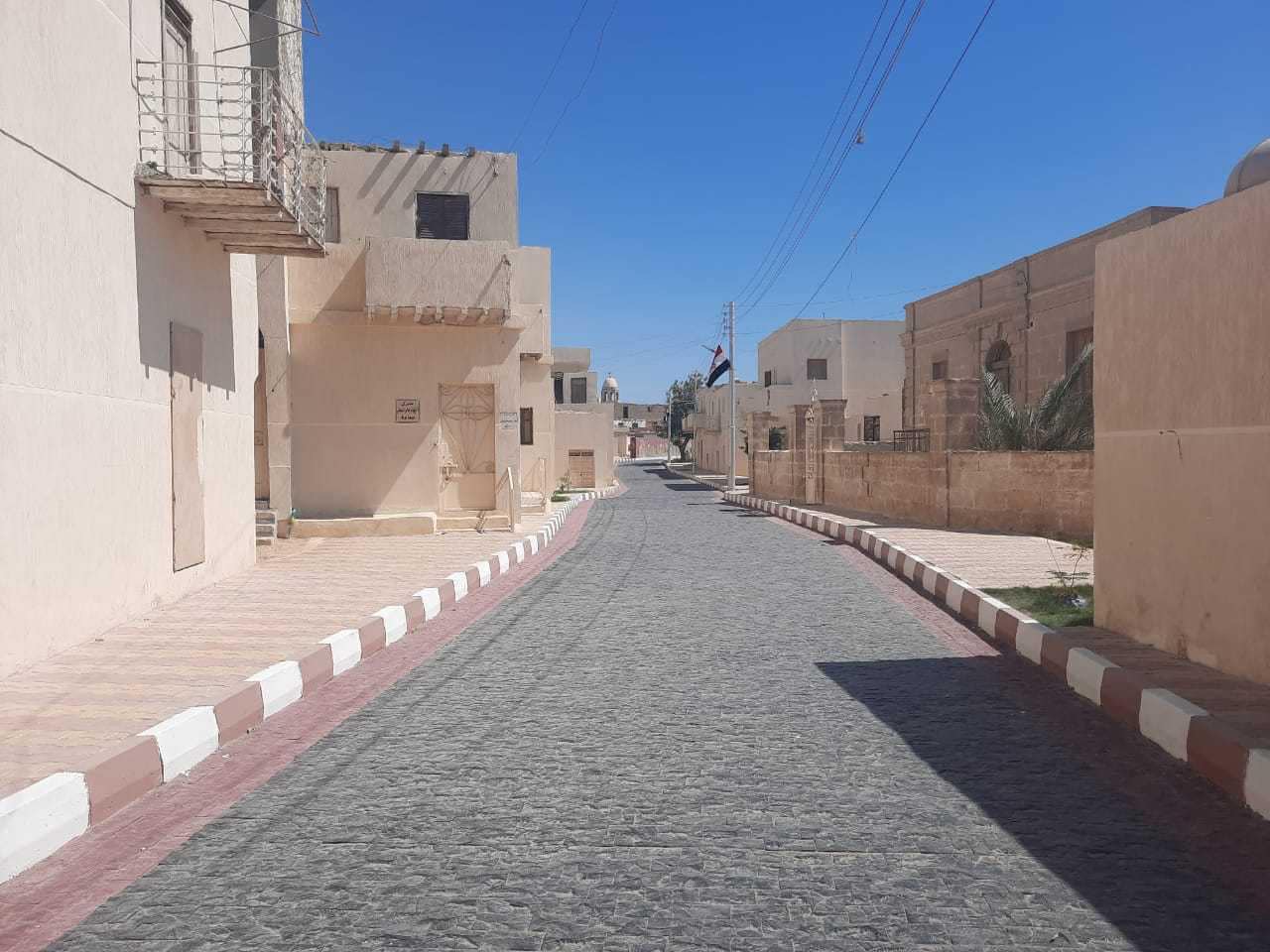 The church of the Holy Virgin at Gabal al-Teir has been carefully restored following thorough years-long-studies and research of the ancient edifice as well as the surrounding environment and the factors of erosion. The work was completed under supervision of the Ministry of Tourism and Antiquities. “But I didn’t wish to burden the State with the refurbishment budget which has cost the diocese some EGP60million,” Anba Paphnutius said.

Ayman Nabil the architect representing Scale Company that oversaw the renovation project of the Holy Virgin’s ancient church, told Watani that the works involved restoration of the ceilings, the grotto, the bell towers, the western corridor and altars, as well as the outer northern and eastern walls.

This was not the end of our talk with Anba Paphnutius; so many other topics were broached relating to his service and parish. Watani promises its readers a full version of the gripping interview shortly. 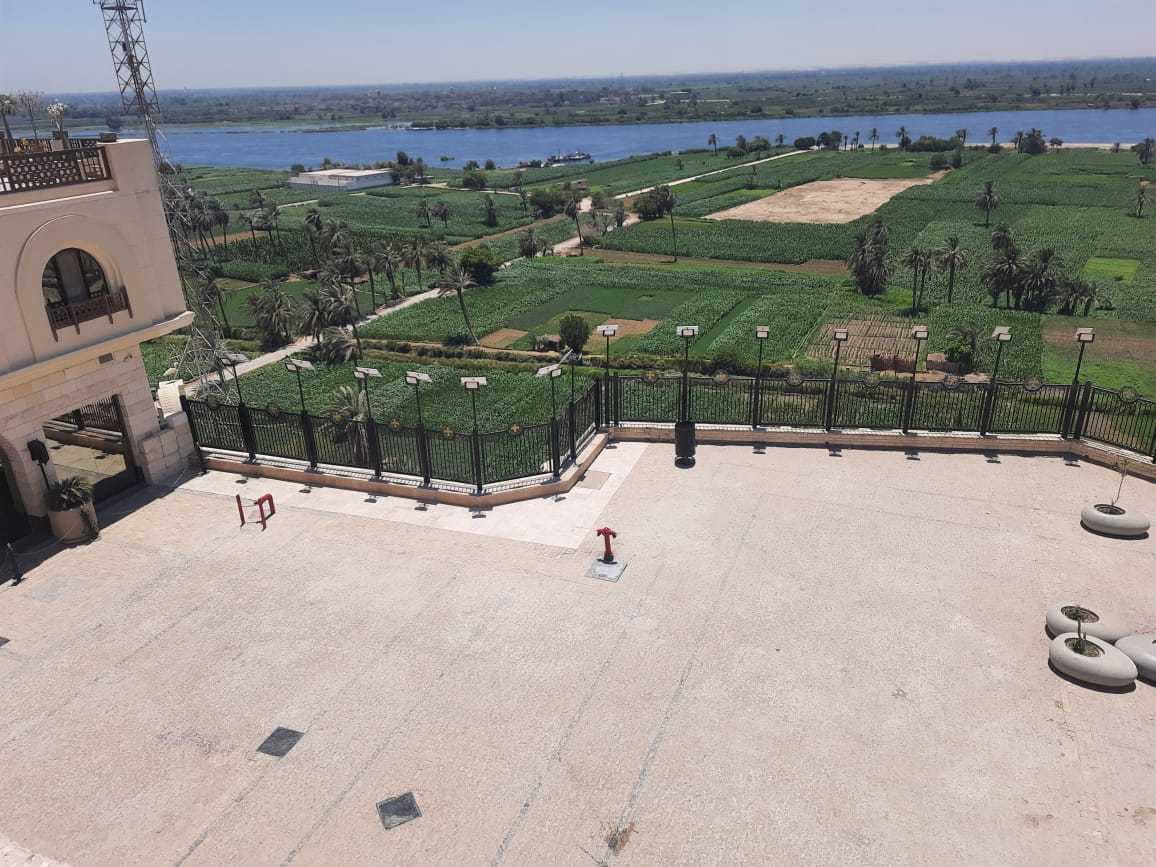 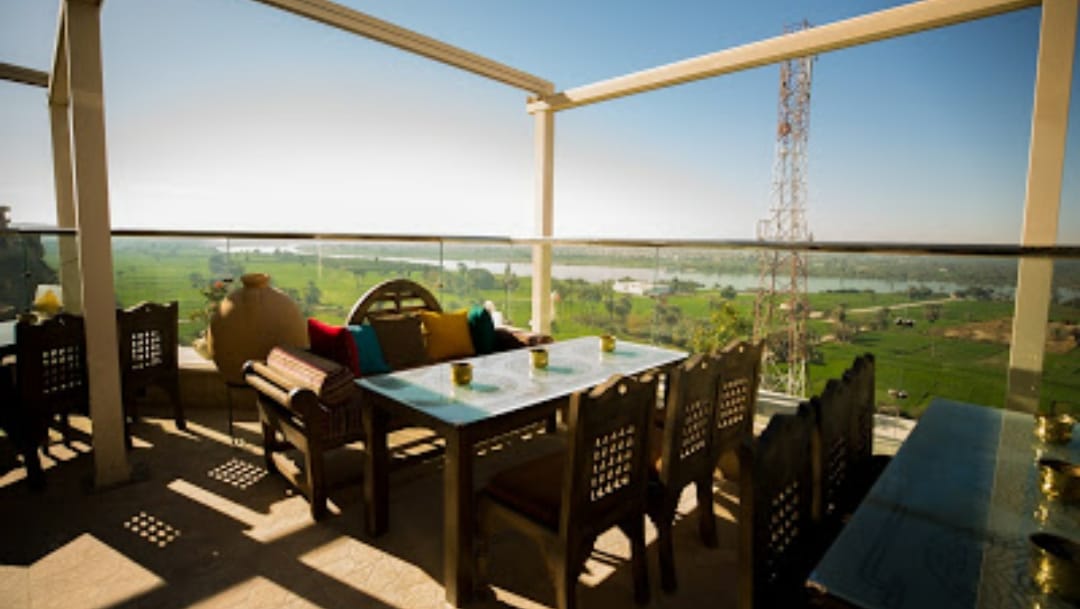 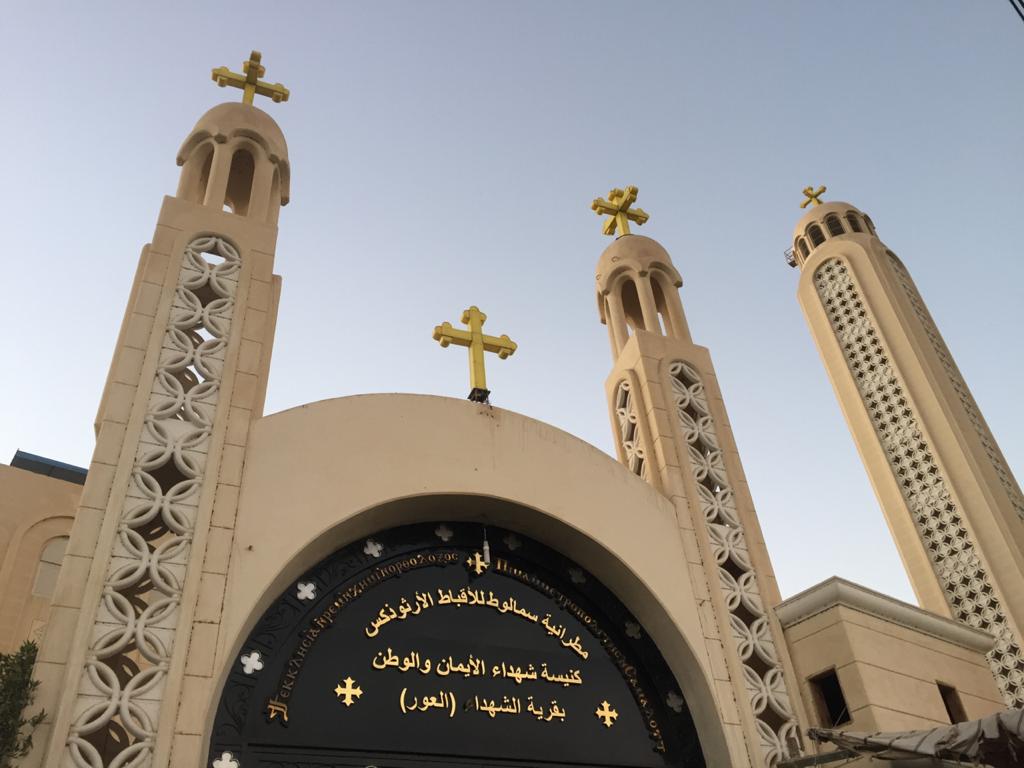