The invitation card for the wedding of Kyrillos and Demiana, which is due to take place today, has gone viral on social media because it is written in the Coptic language.

Many bloggers wondered why the young modern couple chose to write their wedding card in a language spoken by Egyptians centuries ago, and today limited in use to almost exclusively the Coptic Church.

The couple come from Agamy, west of Alexandria, and their wedding ceremony is scheduled for the evening of Sunday 25 July 2021 at the Coptic church of Mar-Girgis (St George) in the district of al-Max.

The invitation card carries a Bible verse from Sing of Solomon 3:4 “I found the one I love; I held him and would not let him go.”

Watani was able to contact the groom, 28-year-old Kyrillos Kamal Attallah who introduced himself as an accountant at a printing company.

“The word ‘Coptic’ means ‘Egyptian’,” Kyrillos said. “Side-by-side with my work as an accountant, I present a YouTube programme under the title “Coptic Tales”, which aims at explaining the history of Egypt and the Copts, and educates viewers on prominent Coptic and Egyptian figures.”

Kyrillos said that, as most people do, he and his fiancée Demiana Mina Shukry, who is a chemist, had printed their wedding invitation in Arabic. “Then one of my friends,” he said, “appeared to think this was out of place. He called me to say: ‘how can you, the presenter of Coptic Tales, not print your wedding invitation in Coptic?!’ I thought he was right, so I spoke with Demiana who absolutely agreed.” The pair rewrote the invitation card in Coptic, printed it, and posted it on social media.

“We are happy we did that,” Kyrillos said. “It might work as an attempt to revive our ancestors’ language, and an encouragement for others to learn Coptic.”

As to blogger comments, Kyrillos told Watani:“Of course, some people posted comments mocking our use of an ancient language in preference to a modern one which everyone understood. But the majority were impressed that we had opted for a historic language that was the reason behind deciphering the mystery of ancient Egyptian hieroglyphs.” 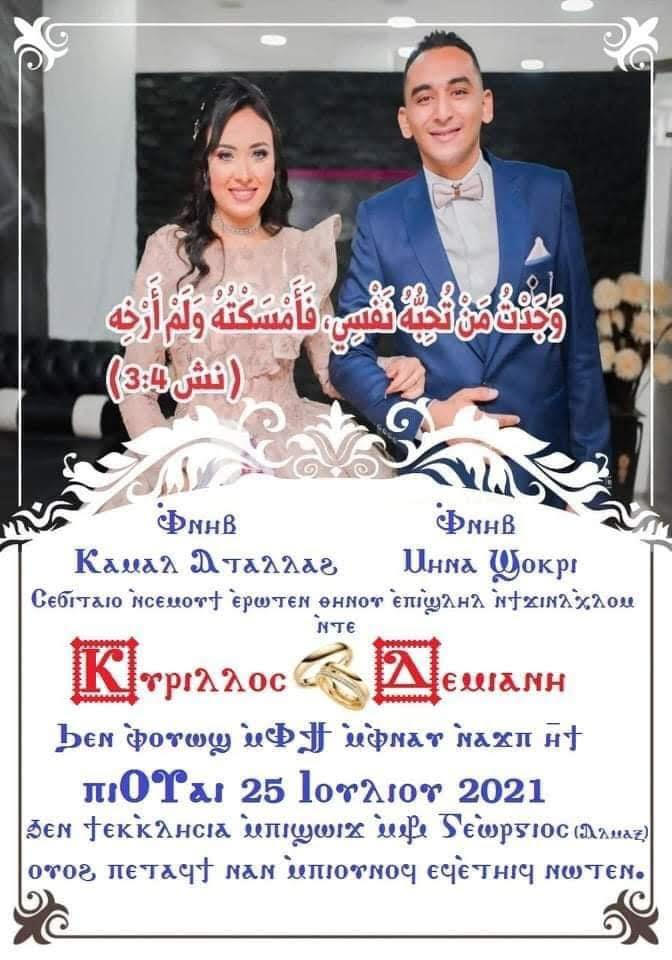