Christ is Born, let us glorify Him

My Beloved, the Blessed Children of the Holy Church,

It is with great joy that I wish you a blessed Feast of the Nativity of our Lord, God, and Saviour Jesus Christ, as well as a blessed New Year. May our Lord give us the blessings of His Holy Nativity and grant us a joyful, holy, and blessed New Year.

Our celebration of the Feast of the Nativity is actually the celebration of the Mystery of the Incarnation of our Lord Jesus Christ. It is the mystery of the Divine humility, in which Christ made Himself of no reputation for our salvation.  In his Epistle to the Philippians, St Paul explained the mystery of Christ emptying Himself and wrote, “Let this mind be in you which was also in Christ Jesus, who, being in the form of God, did not consider it robbery to be equal with God, but made Himself of no reputation, taking the form of a bondservant, and coming in the likeness of men.  And being found in appearance as a man, He humbled Himself and became obedient to the point of death, even the death of the cross.  Therefore, God also has highly exalted Him and given Him the name which is above every name, that at the name of Jesus every knee should bow, of those in heaven, and of those on earth, and of those under the earth, and that every tongue should confess that Jesus Christ is Lord, to the glory of God the Father” (Phil 2: 5-11).

The mystery of Christ emptying Himself means that God the Word, Who is of one essence with the Father, accepted, in the fullness of time, to be incarnate of the Holy Spirit and of the Holy Virgin Mary, and became Man for our salvation. Although He is True God, yet He accepted to become Man, perfect in His divinity and perfect in His humanity.  Therefore, we praise and glorify God, because His Incarnation was for our salvation, and we say in the Thursday Theotokia of the Midnight Praises, “He did not cease to be divine; He became the Son of Man, while He is the True God, Who came and saved us.” 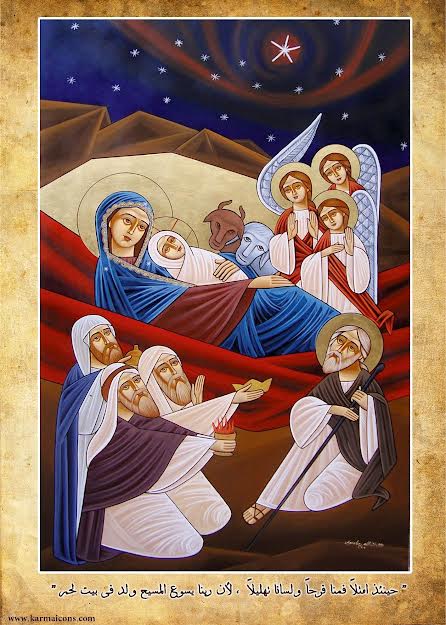 For our salvation, God the Word emptied Himself and He accepted:

Our true celebration of the Mystery of the Incarnation, which is the mystery of Christ emptying Himself, lies in how we learn to empty ourselves and imitate our Good Lord in serving others.  We ought to understand that true greatness is revealed in service with sacrifice and self-denial.  When the disciples argued amongst themselves about who is the greatest, Christ taught them and led them to the path of true greatness, “If anyone desires to be first, he shall be last of all and servant of all” (Mk 9:35). In the story of the rich man and Lazarus, the rich man lived luxuriously, as written, “There was a certain rich man who was clothed in purple and fine linen and fared sumptuously every day”  (Lk 16:19). The rich man was absorbed in the comfort of his life and did not step outside the sphere of his own self-interest. Therefore, he could not notice Lazarus the beggar, and the Gospel tells us, “But there was a certain beggar named Lazarus, full of sores, who was laid at his gate, desiring to be fed with the crumbs which fell from the rich man’s table” (Lk 16: 20-21). In the end, when the rich man died, he went to Hades and was tormented; his earthly luxuries and riches could not save him, because they were all temporal.  On the other hand, in the Parable of the Good Samaritan we see a different example. The Samaritan exemplified true service and cared for the man, who “fell among thieves, who stripped him of his clothing, wounded him, and departed, leaving him half dead” (Lk. 10:30).   Whereas, both the priest and the Levite passed by the wounded man and ignored him, the Samaritan imitated Christ by emptying himself of the hatred that existed between the Jews and the Samaritans, and cared for the wounded man.

We ask God to help us so we can imitate our Good Lord and serve one another with humility and self-denial.

We pray for the peace of our Holy Orthodox Church and our beloved father, H.H. Pope Tawadros II.

Wishing you many happy returns.

Tags: Coptic ChristmasFeast of the NativityMetropolitan of the Coptic Orthodox Diocese of Los AngelesMetropolitan Serapion