The Coptic Church, represented by Pope Tawadros II, has issued a statement mourning Nabil Habashy Salama, a 62-year-old Coptic man who was killed by Daesh, also known as the Islamic State IS. The statement said the Church was mourning her virtuous son who had been kidnapped by takfiris—a takfiri is a fundamental Muslim who condemns others as kafirs, meaning apostates—and martyred at their hands. This was publicised in video footage posted on 18 April on the takfiri’s social media platforms, the statement said.

“Even as the Church mourns her faithful son and servant, she feels joy at his heavenly award in Jesus Christ who he held on to and shed his blood for.

“The Church confirms her support of all the Egyptian State’s efforts in battling terror, the attacks of which only makes us more adamant in preserving our national unity.

“In this regard, we applaud the efforts of the Egyptian military and police.

“We offer our condolences to the family of the martyr, and pray for the peace of our land.”

Nabil Habashy Salama who was kidnapped in November 2020 from his home town of Bir al-Abd in North Sinai by Daesh, was executed by his captors.

A video showing the execution was posted on the

Islamic group’s sites. The Copt was filmed citing his full name and trade, and saying that he had been captured three months and 11 days earlier [which means that he was executed in March 2021], and that the Church was cooperating with the Egyptian army against IS. Other footage was then aired showing Mr Salama with his hands tied up. With him were three masked men; their leader gave a word in which he said: “We thank the great Allah who ordered his followers to kill, and the kafirs [apostates] to be subjugated until they pay the jizya while down on their knees. This is a message to Crusaders in every spot on earth: as you fight you will be fought, and as you capture you will be captured. As for you. Egypt’s Nassaara [a derogatory word for ‘Christian’], this is your reward for supporting the Egyptian army…” He then killed Mr Salama with a shot in the head.

Mr Salama, who had been a trader and owned shops that sold garments, jewellery, and mobile phones was kidnapped by gunmen in Bir al-Abd last November. The kidnappers demanded a ransom of EGP5 million. His family could not pay the ransom, and were advised by the local security officials to leave town for their own safety, which they did.

Mr Salama had two sons and a daughter. He was the man who built the only church in Bir al-Abd, the church of the Holy Virgin, St Karass, and St Abanoub. His son, Peter, told Watani: “It was heart wrenching to see the execution of my father. He had never done anything wrong, in fact he loved to serve everyone and was loved by all in Bir al-Abd.”

Peter observed that the video showed that his father’s teeth were broken, indicating he had been tortured. He said he received threats from Daesh following his father’s execution.

Peter’s sister, Marina, said that following the first shock and grief, she felt proud of her father. “He lived and died a great man,” she said. “He is now in a better place, with Jesus whom he loved and served.”

This is not the first time Copts in North Sinai towns are kidnapped by Islamic jihadis or takfiris for ransom. Some return if the ransom sum is negotiated and paid, but others are killed.

It is not known whether the 100 Coptic families in Bir al-Abd will be asked to leave town as a safety precaution. The move is a very hard one which brings about lost livelihoods. In February 2017, some 350 Coptic families had to exit al-Arish in North Sinai in the wake of threats and a wave of killings waged against them by Islamist jihadis. 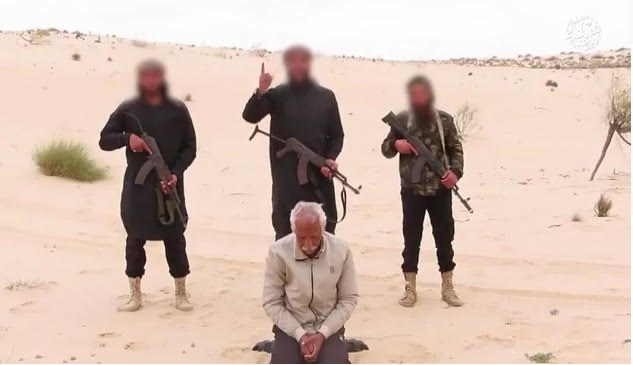