“And God said let there be light, and there was light”; so says the Bible in the Book of Genesis. So God created light, but it was up to humans to discover how to light up their dark nights, and to harness that lighting fire in lighting devices.

A month-long exhibition of lanterns used in Egypt throughout the Coptic and Islamic eras opened on 13 July 2022 at the Islamic Museum in Cairo for two weeks, then moved to the Coptic Museum on 27 July for another two weeks. 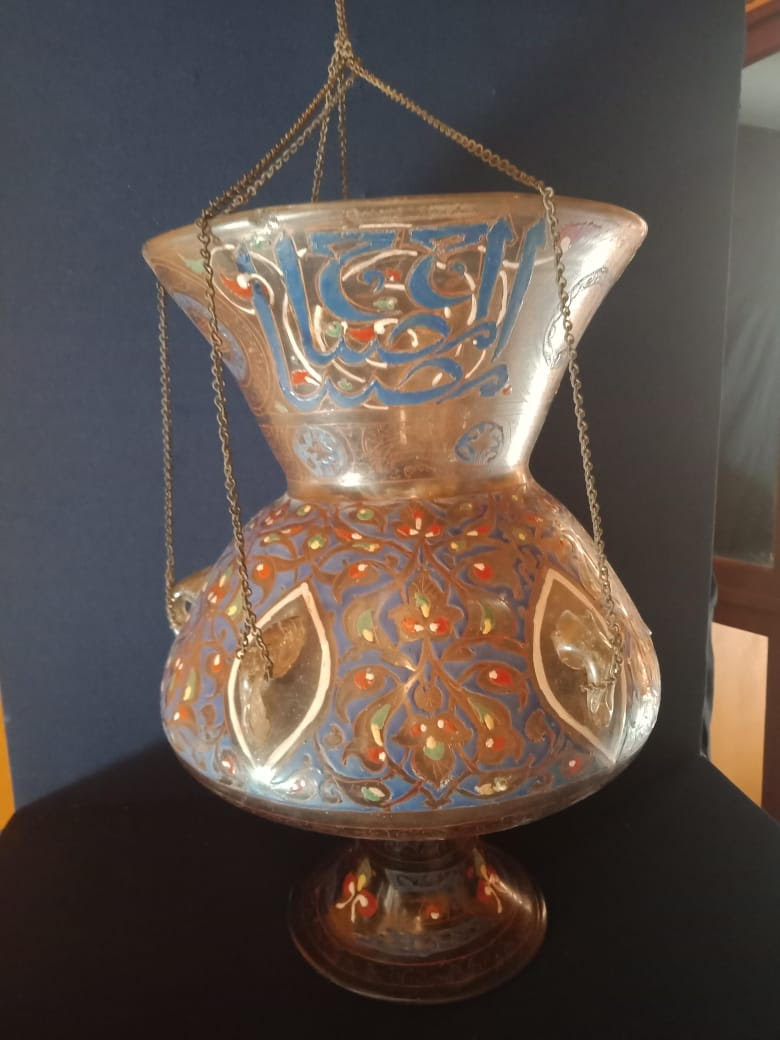 The exhibition, titled “Misraga wa Mishkah”, focuses on lighting devices: misraga being a lighting device or lantern used during the Coptic era which lasted from the second century to the eighth, and mishkah being the Islamic equivalent prevalent during Mamluk and Ottoman eras that spanned the 13th to the 19th centuries. It stands to reason to assume that the misraga would belong to the domain of the Coptic Museum, whereas the mishkah would belong to the Islamic Museum.

It was all the more exciting that the two museums joined forces to display in a single exhibition ‘devices of light’ they count among their treasures. 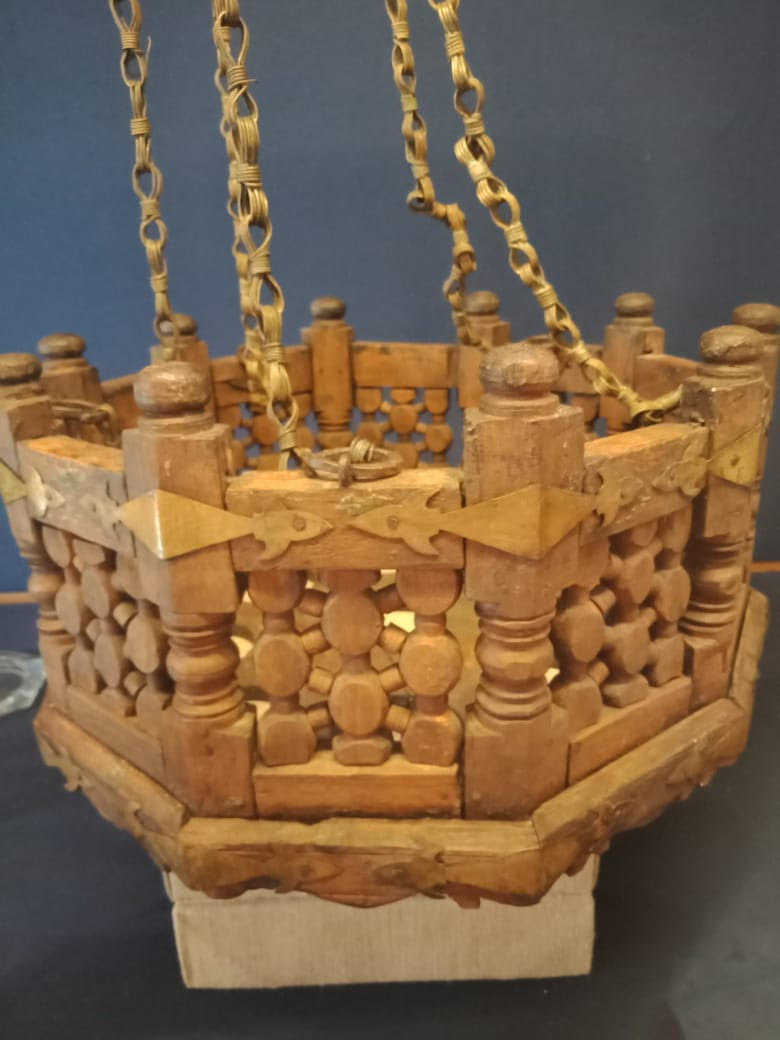 ”Light of the world”

So it was that on 13 July, then again on 27 July, Coptic Bishop Anba Martyros of Cairo’s East of the Railway region joined Sheikh Ashour Mabrouk Abdel-Moneim, general manager at al-Azhar; and Sheikh Magdy Amer of the Islamic Daawa in Giza, to open the exhibition “Misraga wa Mishkah” at the Museum of Islamic Art in Cairo, known for short as the Islamic Museum, and at the Coptic Museum respectively. In attendance were Mamdouh Othman, director general of the Islamic Museum; Jihan Atef, director general of the Coptic Museum; Heba Hamdy, supervisor general of the central management of major museums; Shaza Ismail, professor of Coptic Art at Helen’s University; Asmaa’ Ismail, professor of Islamic Art and Architecture at Fayoum University; Fr Yacoub Soliman, representative of Bishop of Old Cairo Anba Yulius; Muhammad Sayed Leila, head of Old Cairo District; and a number of antiquity experts from the two museums. 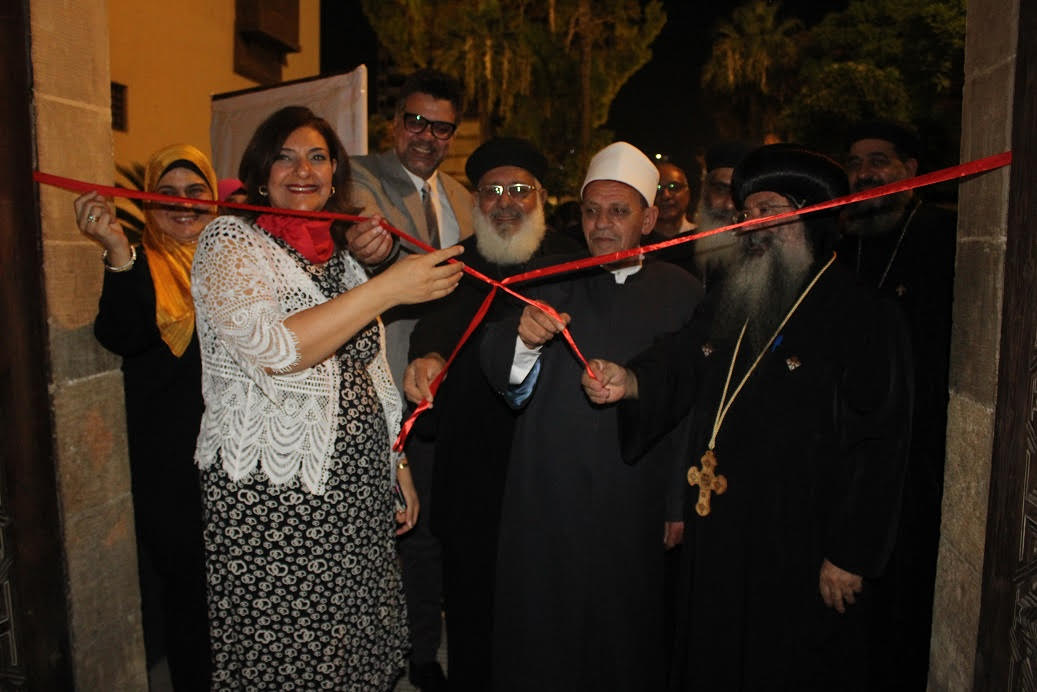 The Coptic Museum’s Ms Atef gave a word in which she welcomed those participating in the opening. She referred to God’s creation of light, and said that, in a sacred context, light symbolises God Himself “the Light of the world”. Humans, she said, had from time immemorial looked for ways to light up the dark that embodied all their unknown fears; hence, she said, the great variety of lighting methods, not least among them the misraga and mishkah.

Misraga wa Mishkah, she said, aims to point out the spiritual and philosophical concept of light as our predecessors saw it.

From torch to lantern

Ms Atef expressed her happiness at the idea of the joint exhibitions between the Islamic and Coptic museums, saying it stresses their mutual cultural and brotherly bond, and highlights the role of museums in enlightening the public. She said the joint exhibition aimed at familiarising visitors of each museum with the acquisitions of the other museum. 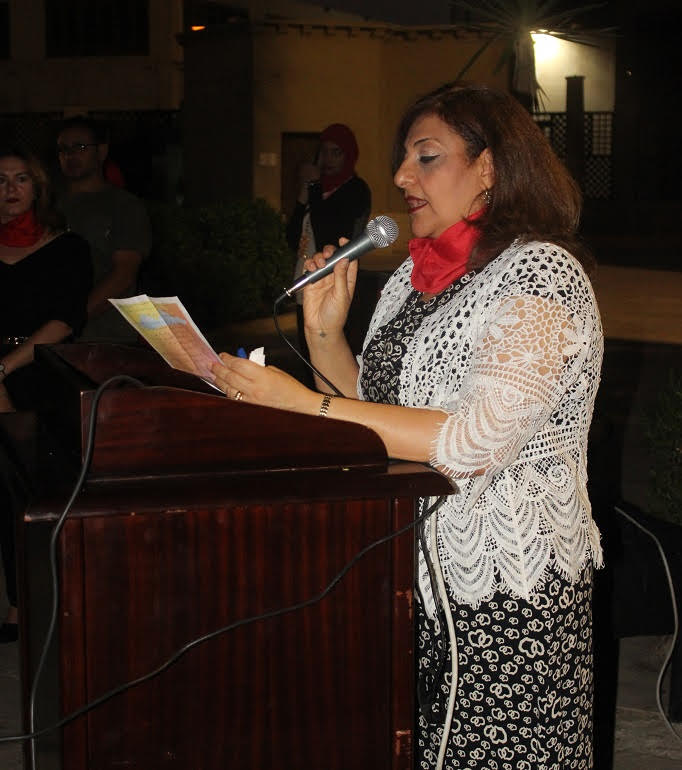 Dr Shaza Ismail gave a lecture on “The Halo over the ages”.

Hayaam Rushdy who is in charge of the Coptic Museum’s scientific department gave an interesting presentation of the history of lighting in Egypt starting with the hand-held torch that consisted mainly of rods to carry the fire. The oldest lighting devices, she said, were shallow vessels made of pottery or stone in which a wick floated on oil. Later, a spout was made in which the wick passed, concentrating the light. Cast lanterns appeared during the Hellenistic era, made of pottery or metal, allowing for more intricate designs. The Roman era brought lanterns made of various material such as pottery, stone, bronze, silver, and gold; during the Byzantine era, lanterns were decorated with abstract forms of lines, crosses, the monogram of Christ, pictures of saints, as well as floral and geometric ornamentation.

At the Islamic Museum’s exhibition, the Coptic Museum displayed 19 artefacts consisting mainly of masarig used in religious rituals and also for lighting purposes in everyday life. The display also included a 18th-19th-century Coptic icon of the Madonna and Child, and two old Coptic manuscripts of books of the Bible: a 331-paper manuscript of Genesis that missed four papers at the beginning and four at the end, and a 345-paper manuscript of the four gospels that was missing four papers at the beginning and two at the end. 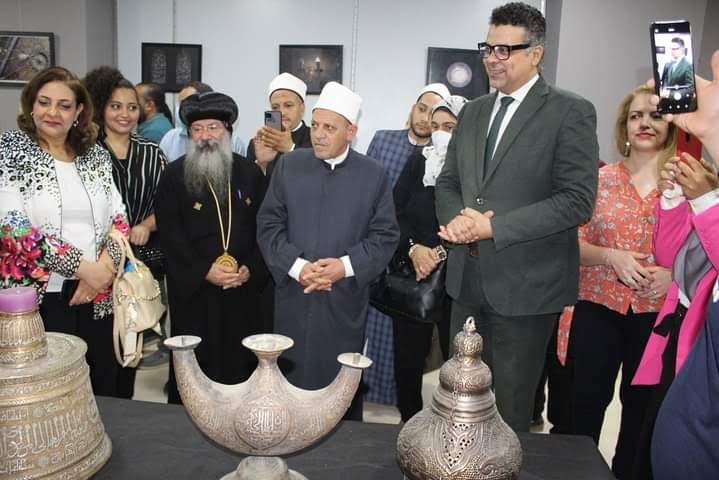 Janet Gad, the official responsible for the exhibitions department at the Coptic Museum explained the details of the masarig collection showcased at the Islamic Museum.

The masarig on display were of different forms, round, oval, or pear-shaped, with one or more spouts, and handles of different forms. They were decorated with geometric forms and Coptic inscriptions; one had a small flower on top with eight petals, another had an engraving of a frog, and yet another was in the shape of a pigeon. Many featured drawings of vine leaves and grapes. One candelabrum had a round base and long neck; another had a curved neck that ended with two winged snakes. 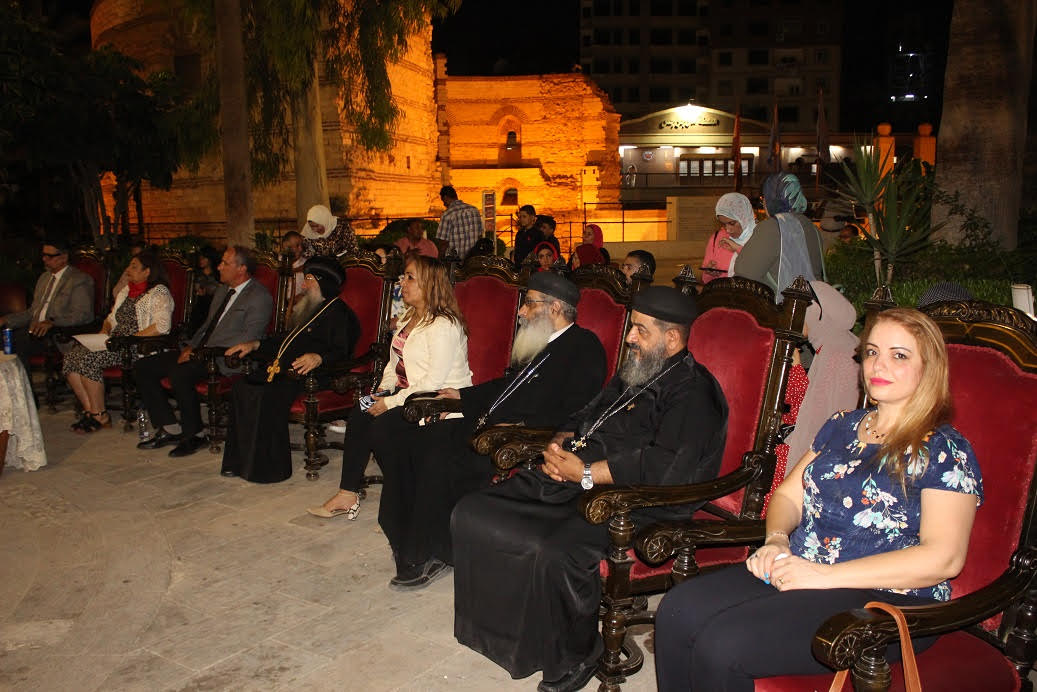 Reciprocally, the Coptic Museum’s exhibition included 27 pieces displayed by the Islamic Museum. Among them were mishkawat, masarig, and manuscripts of different ages, with focus on the concept of light from a spiritual and philosophical perspective.

Mamdouh Othman of the Islamic Museum explained that the collection selected for display at the Coptic Museum included, apart from the mishkawat, a bone comb inscribed with “Allah is the light of the heavens and the earth” on one side, and on the other side “like His light is that in the mishkah”. There was also a Qur’an handwritten by Yaqut al-Muatasami. 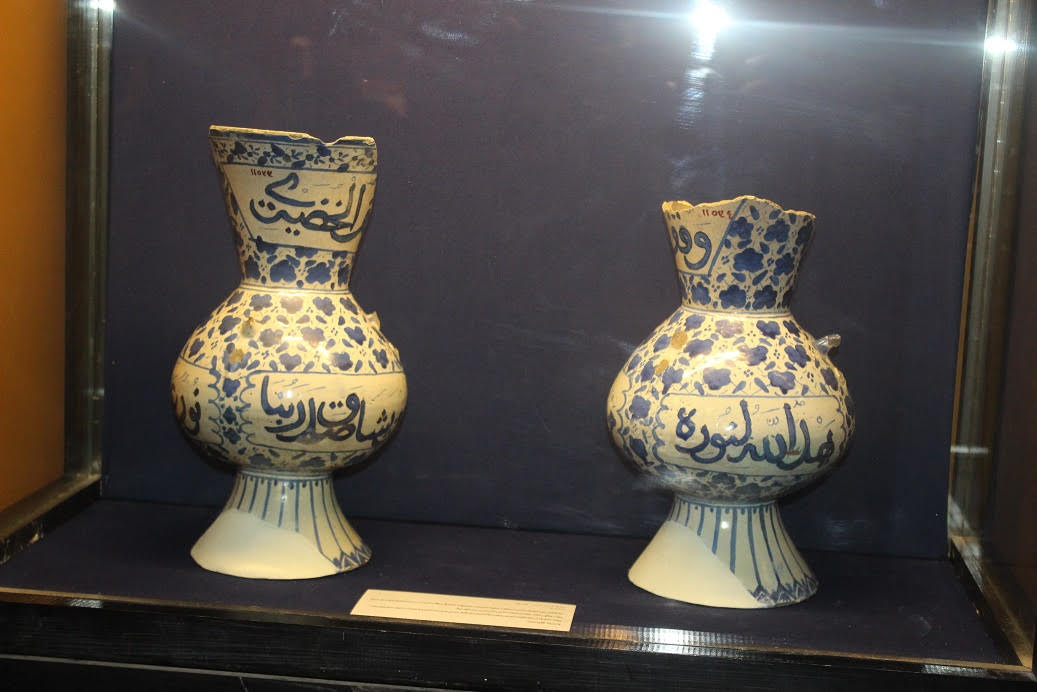 The mishkah collection, Dr Othman said, included one said to have belonged to Sultan Hassan, and another in bronze to Sultan Suleiman. There were two Egyptian mishkawat made of pottery coated in white enamel adorned with blue Qur’an verses and floral ornamentation, also a collection of reading lights and a multi-story wooden tannour inlaid with brass—a tannour was a form of large candelabra.

On the sideline of the main exhibition, an art exhibition was held at the Islamic Museum the theme of which centred around lighting methods and devices during the various Islamic ages and until the present time. There were also models inspired by artefacts from the Islamic Museum, such as bronze candlesticks, glass mishkawat, candle holders, and lanterns of various forms and shapes; also a number of paintings of lighting devices from the Mamluk and Ottoman eras. 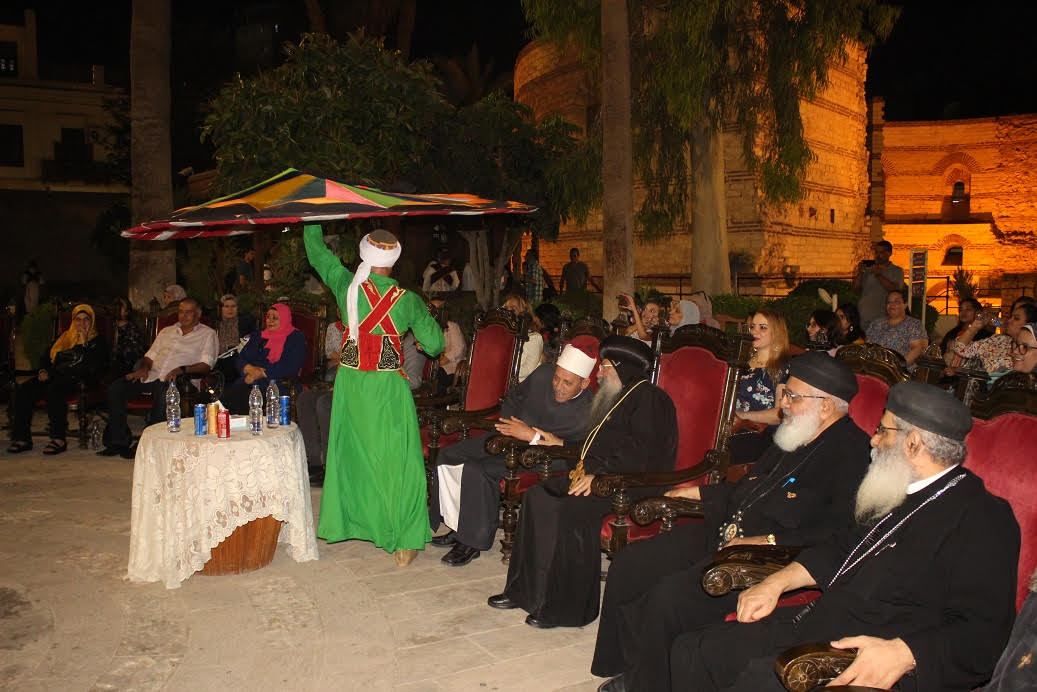 At the Coptic Museum, the opening featured performances of the heritage Sufi Tannoura dance, in addition to performances of Coptic melodies, hymns, and praises by the choir of the church of the Holy Virgin in Rod al-Farag in Cairo.

Lectures were offered on “Lighting devices in Coptic art and antiquities”, and workshops were held on candle making. A number of paintings by Bishoy Rifaat were on display. 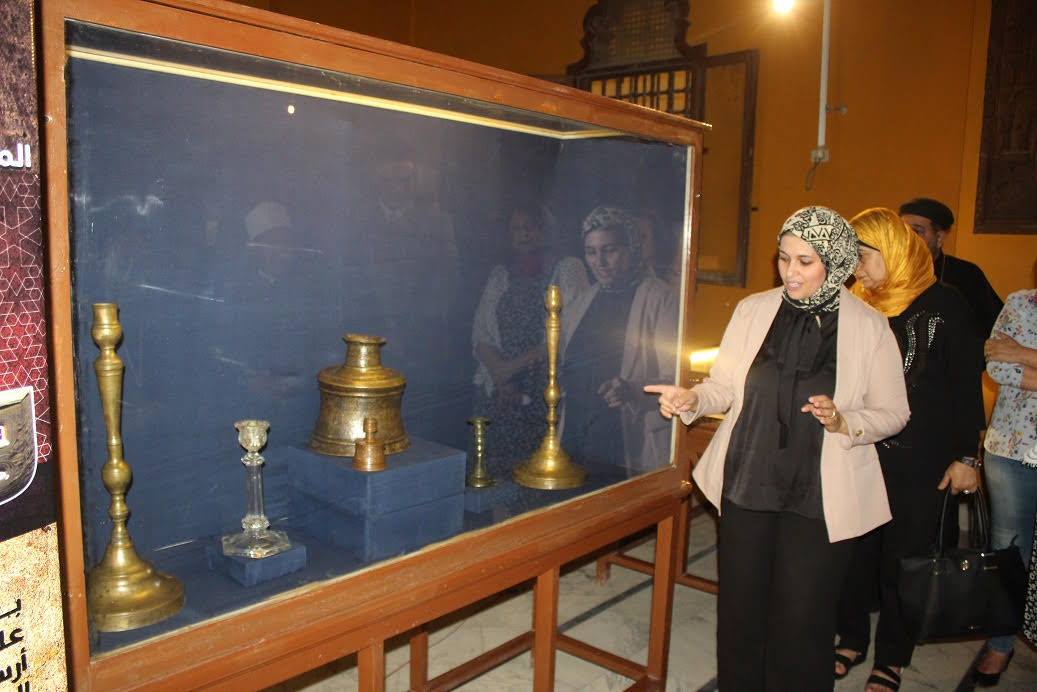 An exhibition was held titled “Lampas” that showcased a collection of candles and alabaster lighting devices adorned with Coptic ornamentation and symbols. 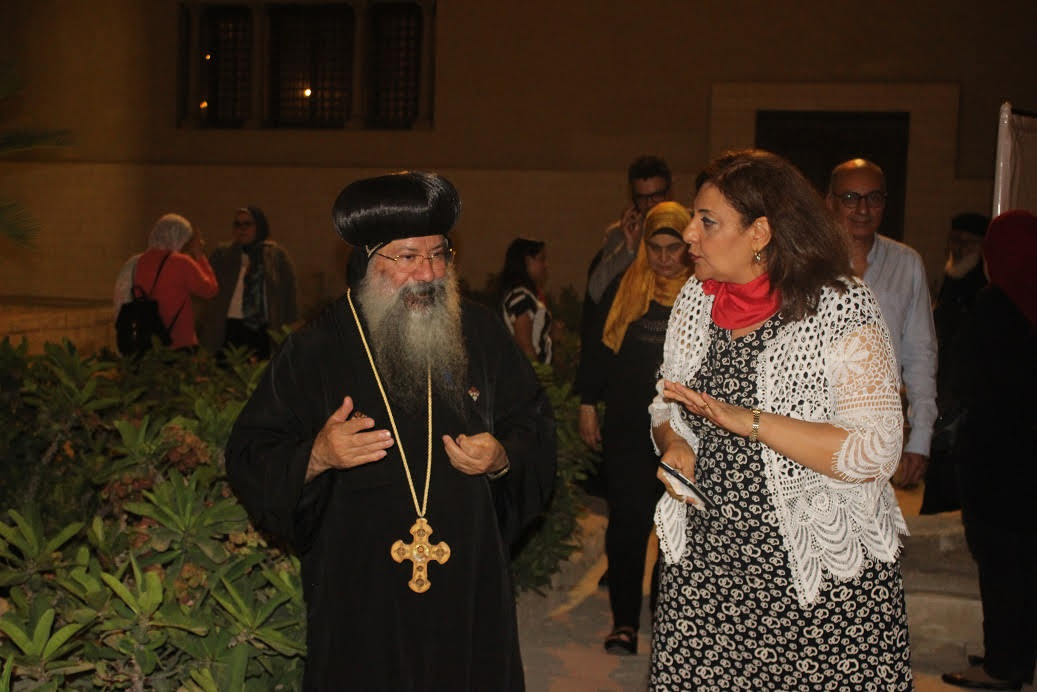 “I am honoured to have participated in the opening of this exhibition by the Islamic and Coptic museums,” Anba Martyros said. “The message it conveys to the Egyptian people is clear: We are one people, we belong to our beloved Egypt which spawned the Pharaonic, Coptic, and Islamic civilisations.

“The Coptic and Islamic museums are proving that the soft power of beauty can root the sense of the one people of Egypt living on the same soil as one nation. 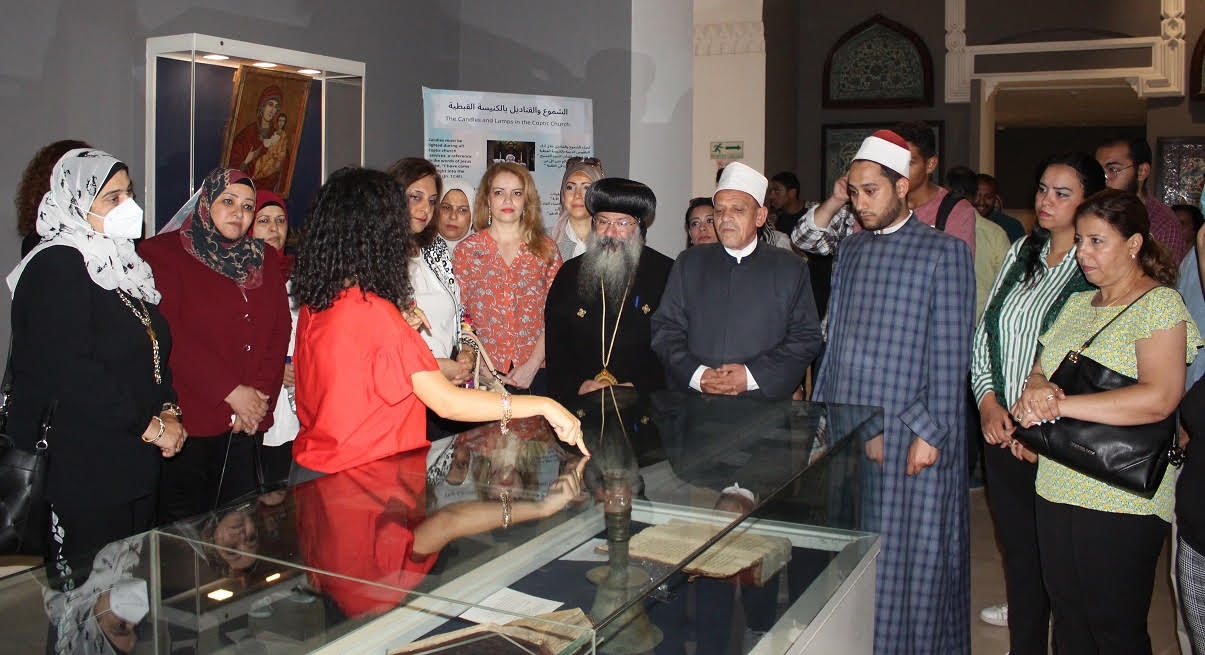 “I wish to express my gratitude to the administrations of the two museums for their endeavour to support the concept of partnership and coexistence among Egyptians throughout the ages, as shown by the continuous cultural thread that ran unbroken through its history, in this case the thread of light. Misraga wa Mishkah expresses the culture of light: civilisation is light, culture is light, and history is light that illuminates our future.” 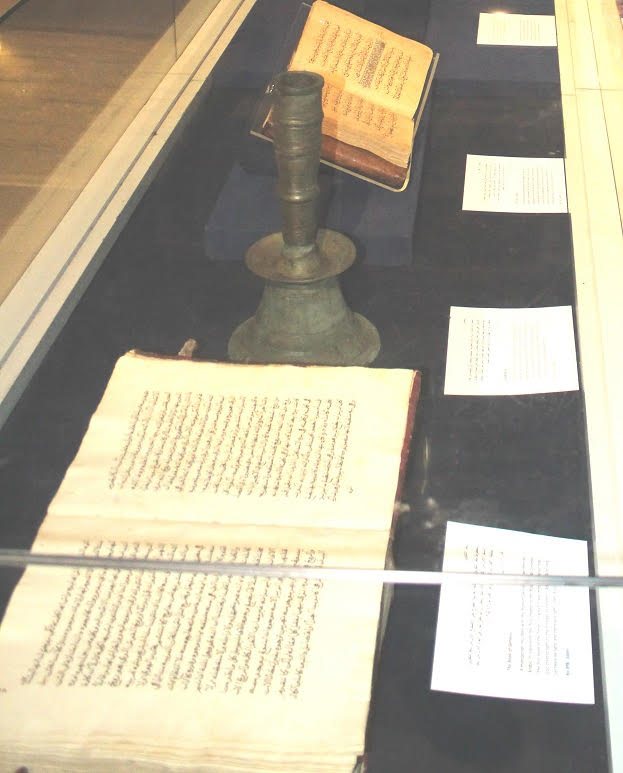 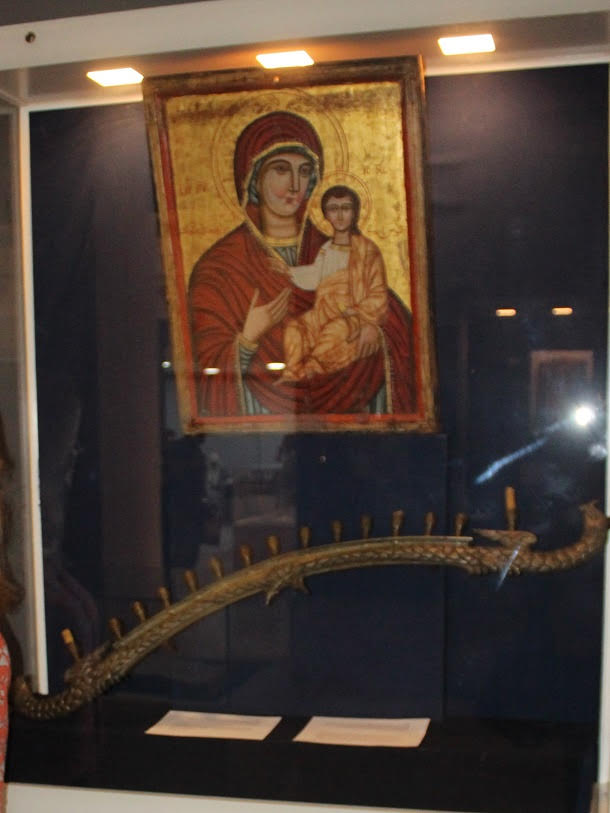 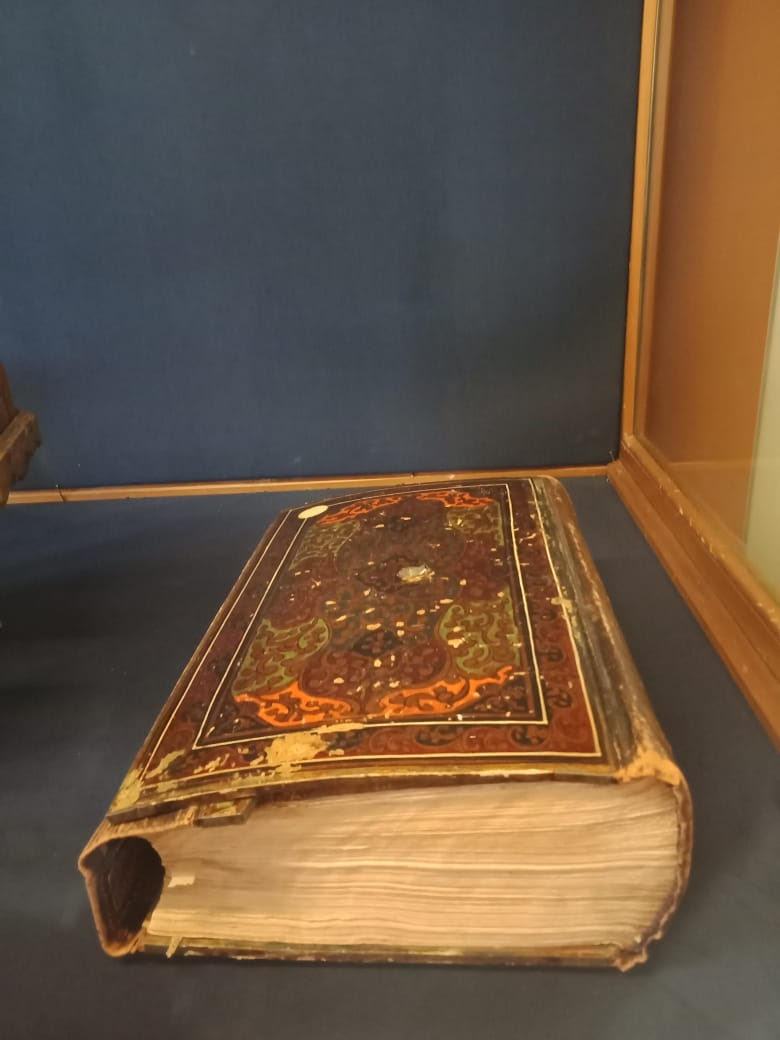 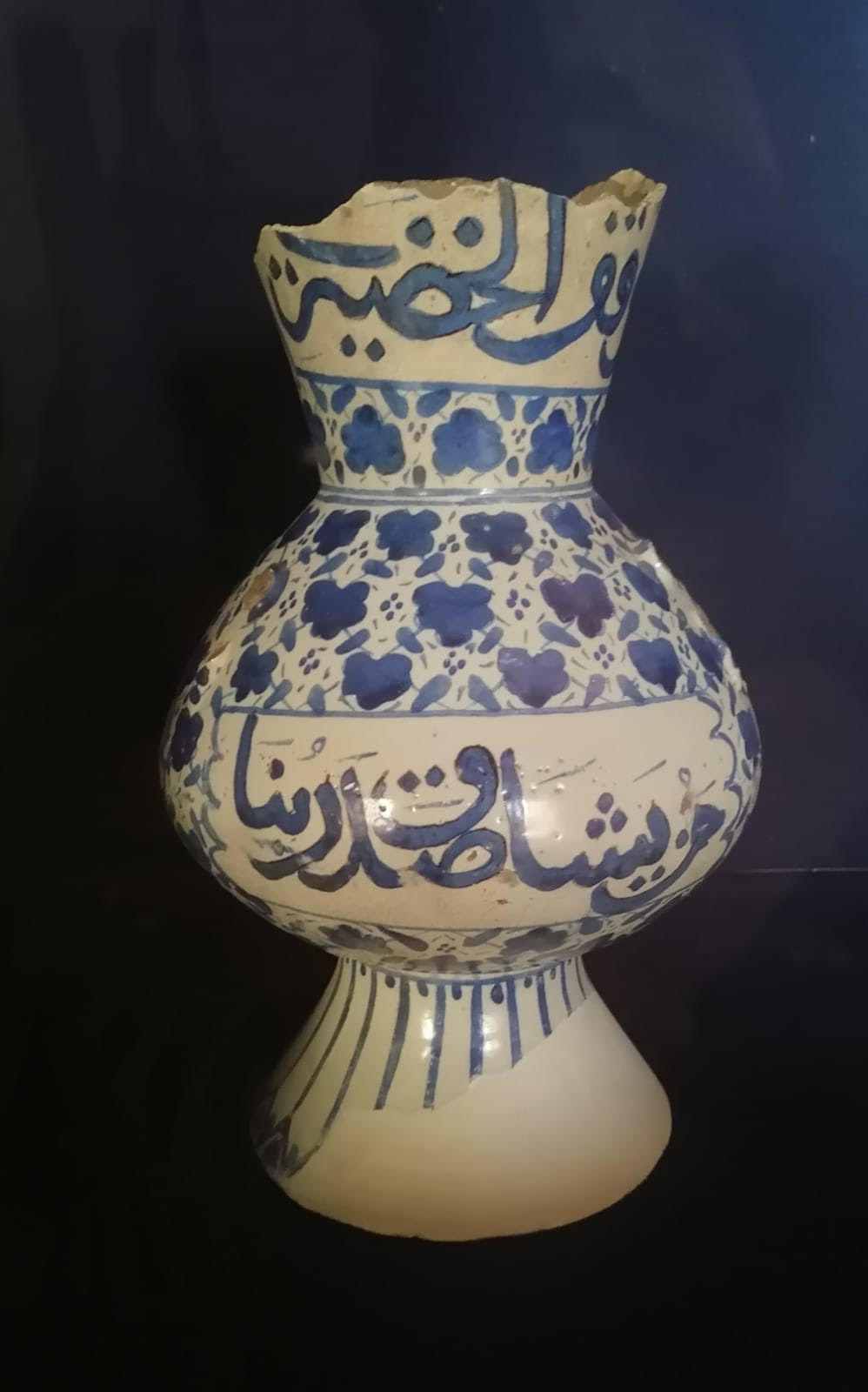 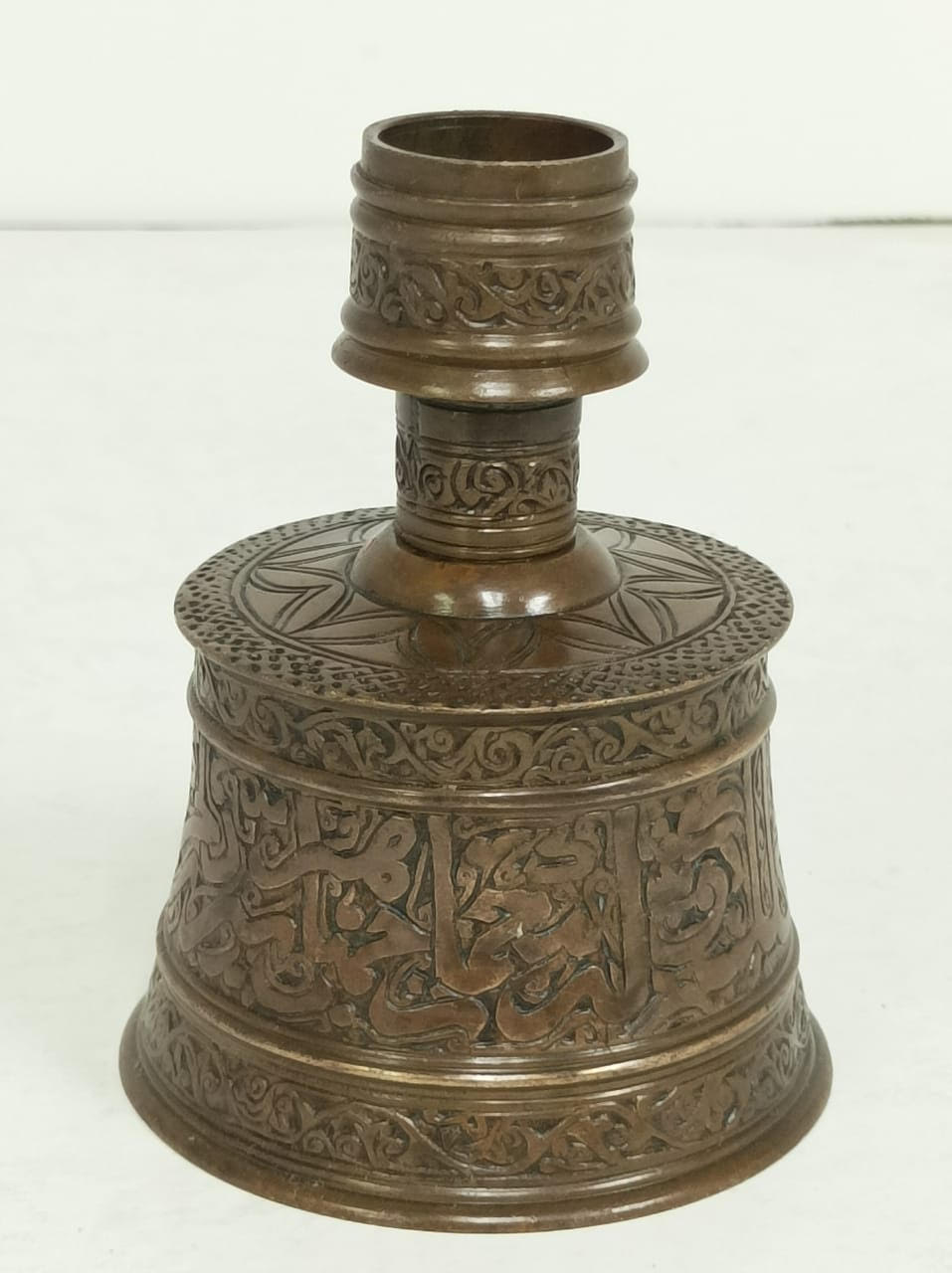