The site of St Mary’s Tree in Matariya in eastern Cairo is the most recent to be developed as a tourist site among the spots on the trail of the Holy Family in Egypt. That trail is the path held by tradition to have been travelled by the Holy Family: the Child Jesus, His mother the Holy Virgin Mary, and St Joseph on their biblical flight into Egypt. 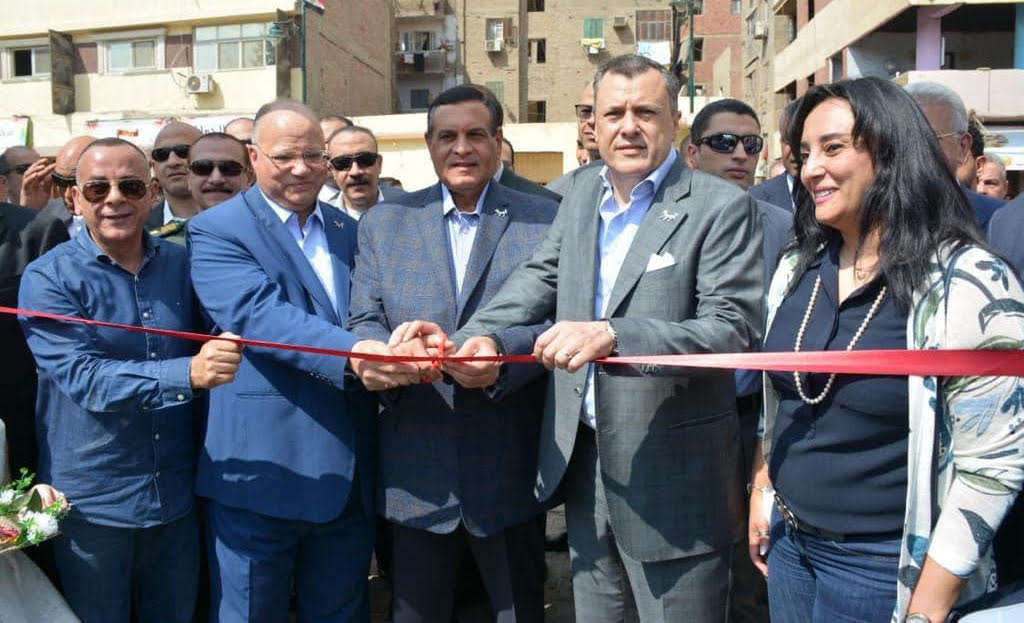 St Mary’s Tree is the sixth spot on the trail to open as a tourist destination, even though it has for long centuries been a site of local pilgrimage, together with the other sites on the trail. Out of some 25 sites targeted for touristic development, five other sites have already been opened to receive tourists: the sites at Samannoud and Sakha in the Delta; Tell Basta East of the Delta; Wadi al- Natroun in the Western Desert, and Gabal al-Teir (Mountain of the Birds) in Samalout, Minya, some 210km south of Cairo. The development is carried out by the Ministry of Tourism and Antiquities in conjunction with the Coptic Church.

The Gospel of St Matthew says that Herod the King intended to kill Baby Jesus and for this purpose ordered that all children under two in Bethlehem, where Jesus had been born, would be killed. But the angel of the Lord appeared to Joseph in a dream and told him to take the young Child and His mother and flee to Egypt. 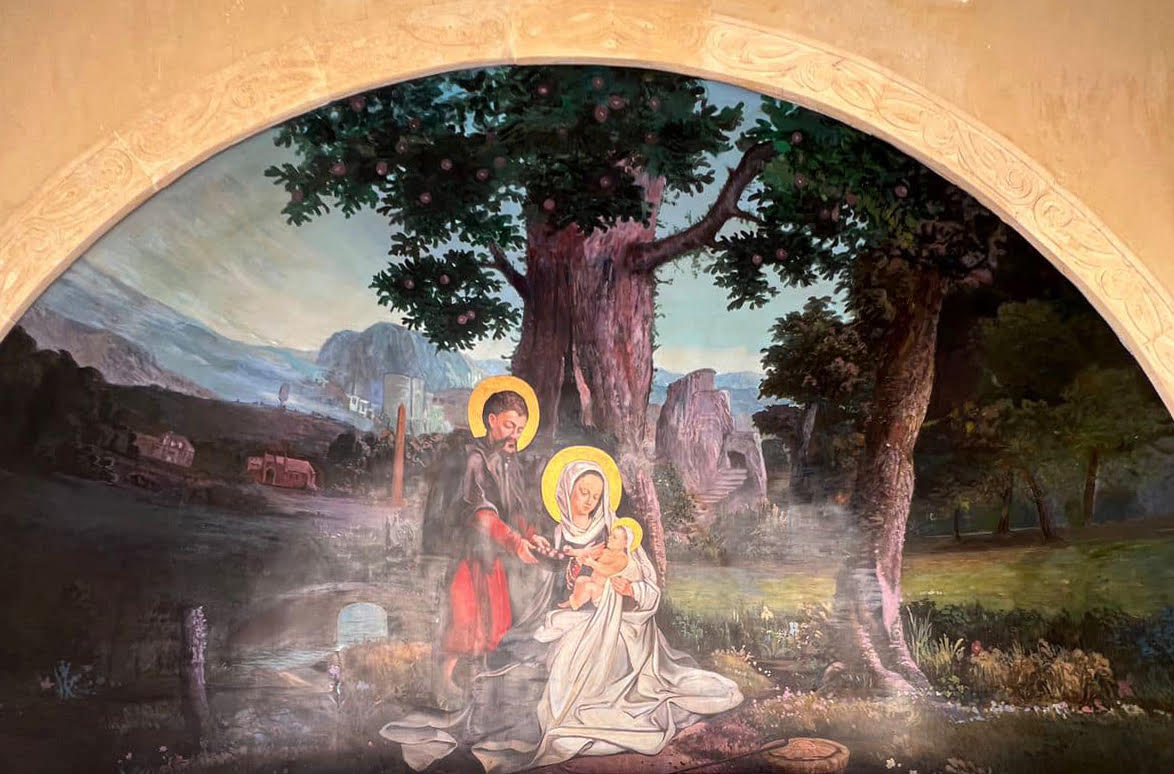 Tradition has it that the Holy Family entered Egypt from the northeast border, traversed the Delta and travelled west to Wadi al-Natroun in the Western Desert, then southeast to what is present-day Cairo from which they proceeded south along the Nile to Assiut, some 350km south of Cairo. They stayed there for what is believed to be more than three years, till Herod died and the angel again appeared to Joseph and told him to take his small family back to Israel. They went back home, crossing the same territory but in a slightly different route. 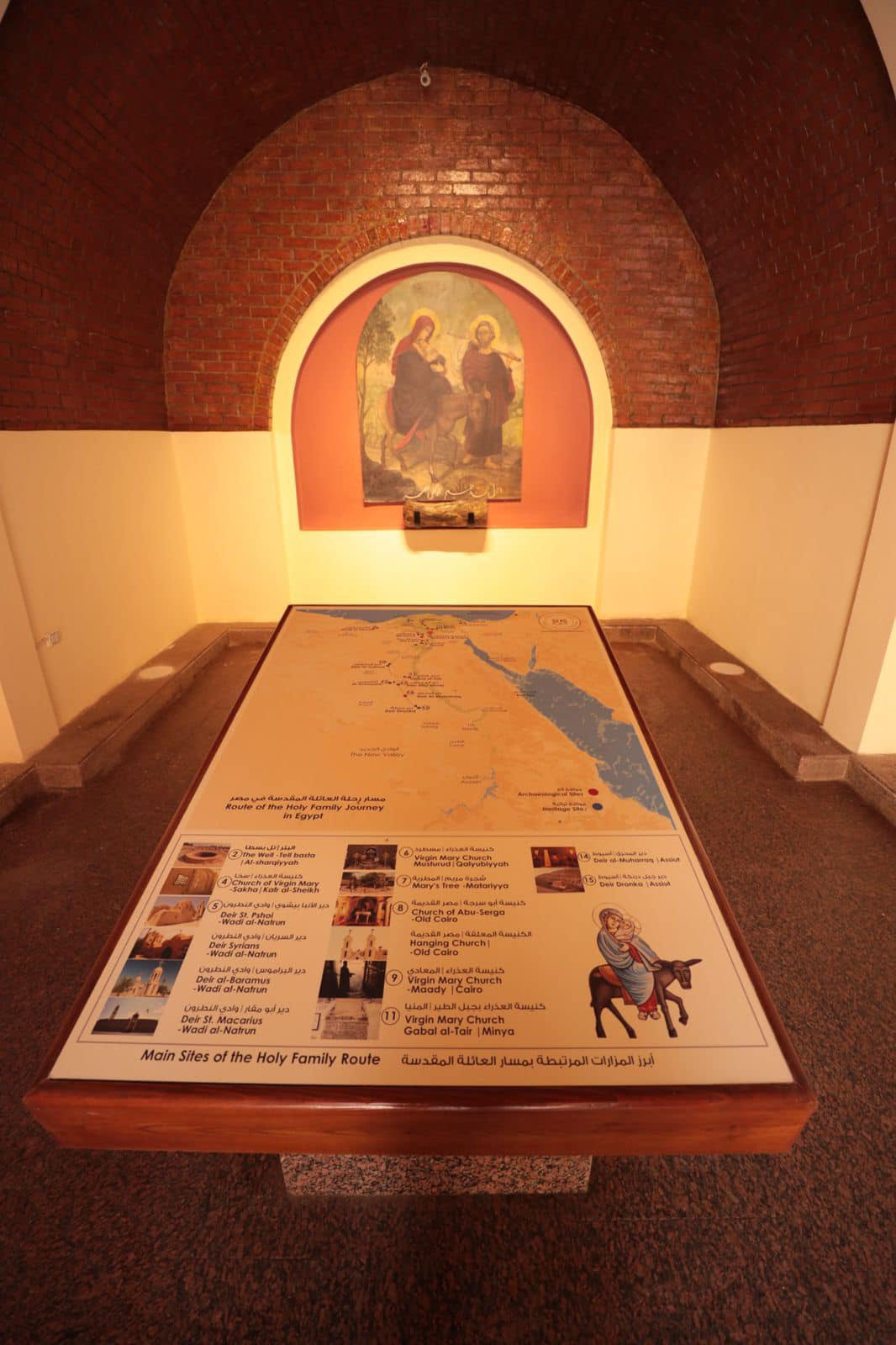 The journey of the Holy Family in Egypt is well charted, cited in old manuscripts and steeped in Egyptian tradition. It extends over 3,500km, and includes 31 sites, eight caves or grottos, 18 water springs or wells, and 13 trees. These sites dot the Egyptian countryside, towns, and deserts; they lie amid present-day communities that live traditional lifestyles which go back centuries in time. Thriving monasteries or churches stand on these spots today. Egyptians frequent them in pilgrimage as sources of blessings. Each site has its own time-honoured story of the poor family that took refuge there more than two millennia ago, living no differently than any other family: nurturing the Baby and caring for Him, bathing Him and washing His clothes, cooking, baking, and moving around.

St Mary’s Tree in Matariya is a Sycamore tree that dates back to the first years of the first AD century. Anba Axios, Bishop of Ain Shams, Matariya, and Hilmiyat al-Zeitoun, told Watani that the tree is believed to have given shelter and shade to the Holy Family as they stopped to rest underneath it. There, the Holy Virgin washed the clothes of Baby Jesus and poured the water on the ground. Out of that ground a balsam tree grew. The well that provided them with drinking water and the water for the wash was sprung by the Child Jesus. It still stands there, its water running till today. 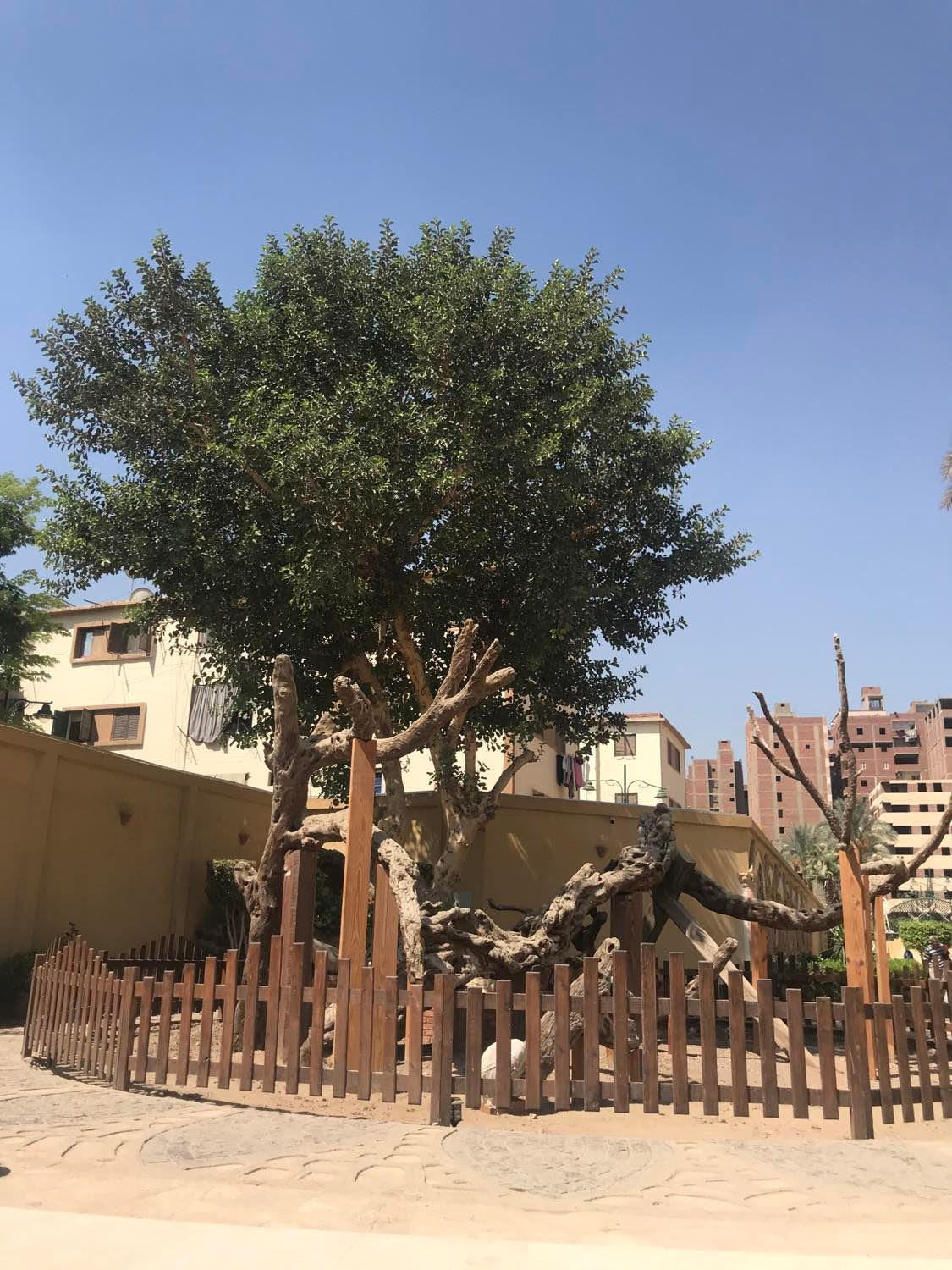 The tree, Anba Axios remarked, was mentioned in the writings of a number of illustrious historians of the Islamic era in Egypt, including al-Mu’taman Abul-Makarem in 1209, and the 16th-century Muhammad bin Ahmed al-Hanafi.

Graffiti by European travellers who would visit the tree while on their way to pilgrimage in the Holy Land, the Bishop said, can be seen on the tree trunk. The graffiti includes the names of French soldiers who had served in Napoleon’s military campaign against Egypt in 1798 – 1801.

In 1868, the French Empress Eugenie who was visiting Egypt to attend the opening of the Suez Canal visited the site of St Mary’s Tree. According to Anba Axios, she stood in the middle of the balsam plants, drank from the well, and visited the local Copts. “That was on 18 October 1869,” he said.

In modern times, the tree has been the focus of official interest since it was listed as a heritage site in 1966; in 1967 the Egyptian Post Authority issued a commemorative stamp honouring it.

The site of St Mary’s Tree boasts a Catholic Church nearby, but no Coptic Orthodox one. Anba Axios expressed a wish to be able to celebrate Mass at the site on significant occasions, even if using a mobile altar for the purpose. “Our Church marks the Feast of the Entry of the Holy Family into Egypt on 1 June,” he said. “We wish to be able to hold Mass at the tree site then. We also hope the feast would be marked as a national Egyptian feast. 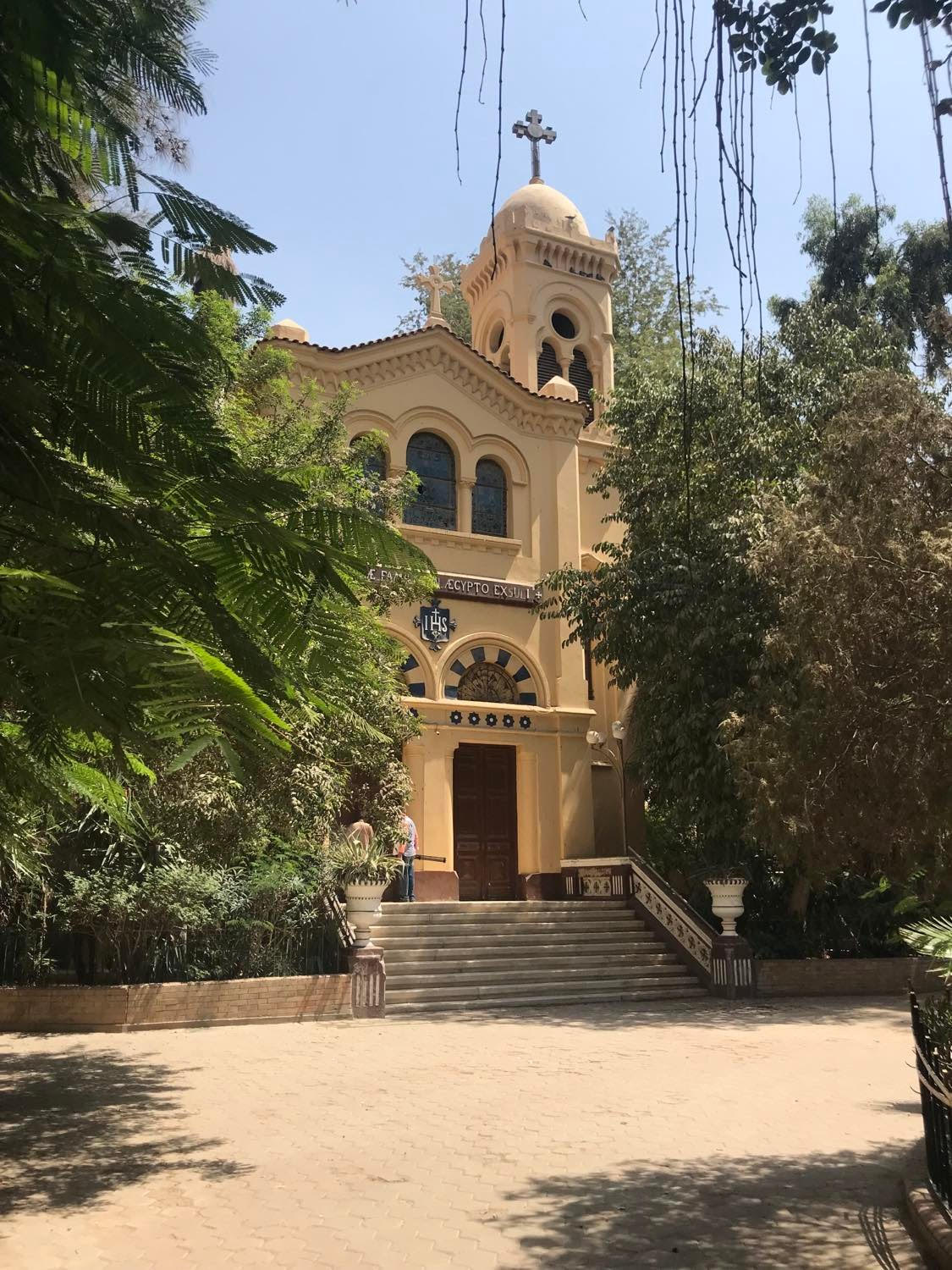 “Perhaps we could also celebrate Mass here on the feast days of the Holy Virgin and on Sundays,” he said.

Thanks are due, Anba Axios said, to the Ministry of Tourism and Antiquities and the Ministry of Local Development, also to all State apparatuses who took part in developing the Holy Family Trail as per the directives of President Sisi. 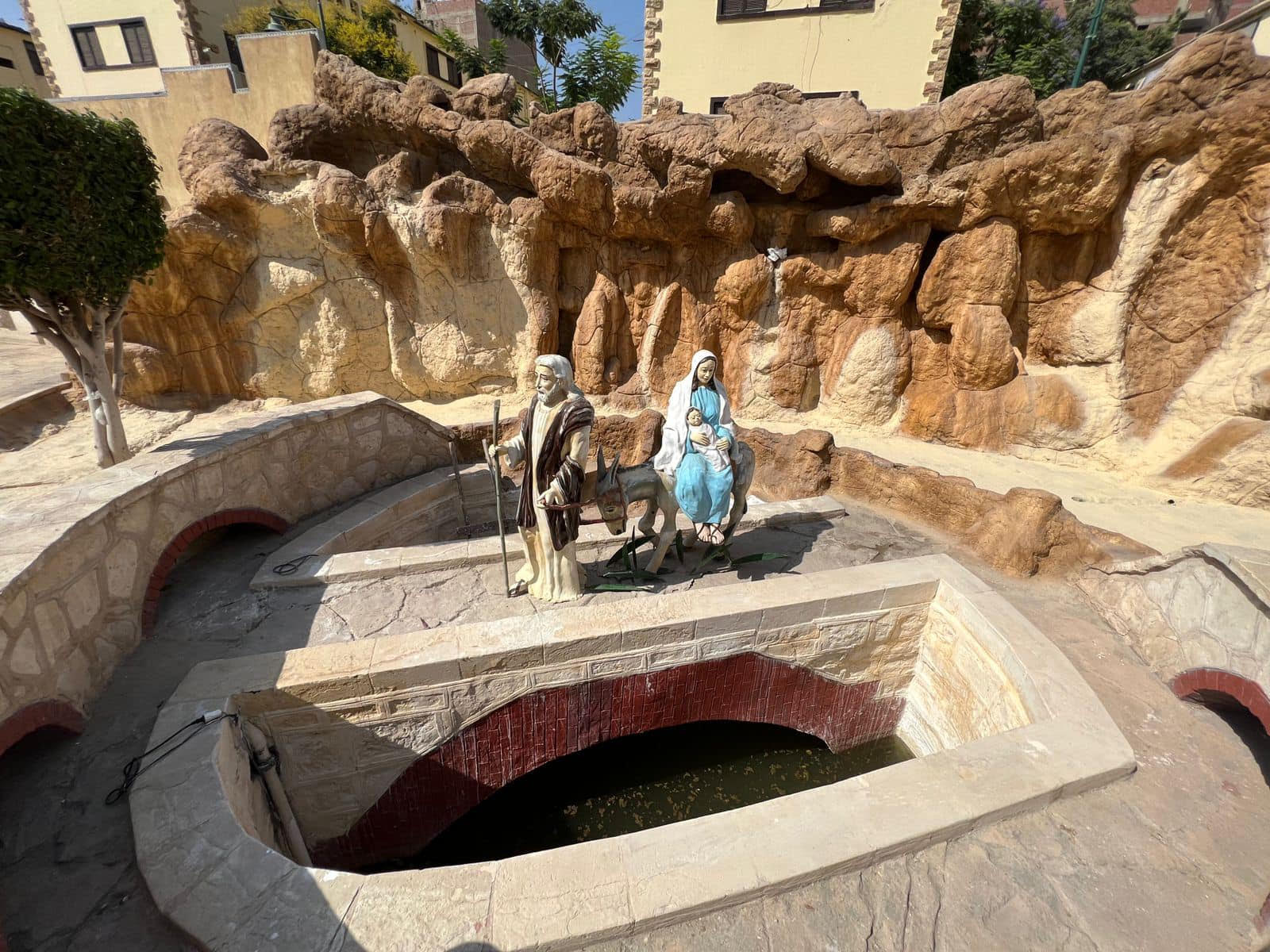 He made special mention of the partnership with non-governmental organisations in the development efforts, in the case of St Mary’s Tree it was the NGO NEHRA (National Egyptian Heritage Revival Association) under the leadership of prominent Coptic businessman Mounir Ghabbour.

In 2021, NEHRA signed a five-year contract with the Supreme Council of Antiquities (SCA) to develop the site of St Mary’s Tree and offer hospitality services for guests. According to the terms agreed, NEHRA has developed the site under supervision of the SCA, and is in charge of maintenance and cleaning of the site, the well and cascade, also of the coffeeshop, souvenir shop, and restrooms.

NEHRA had in 2000 upgraded the St Mary Tree site at the cost of EGP8.5 million. It built an outer wall surrounding the site, a short wooden enclosing fence around the tree, planted a garden there, set up rock formations and statues of the Holy Family as an aesthetic touch, and built a museum of art works on the Holy Family in Egypt.

During the official opening of the site of St Mary’s Tree on 17 September, officials spoke of the scope of development of the site to make it easily accessible to tourists.

It helped a lot that Cairo Governorate had implemented civil works to upgrade the entire area.  Several new roads and traffic axes were built to connect the neighbourhood to vital directions in Cairo, in the process greatly facilitating access to St Mary’s Tree site. A EGP70 million sanitary drainage project was completed, as was another project to reduce underground water. 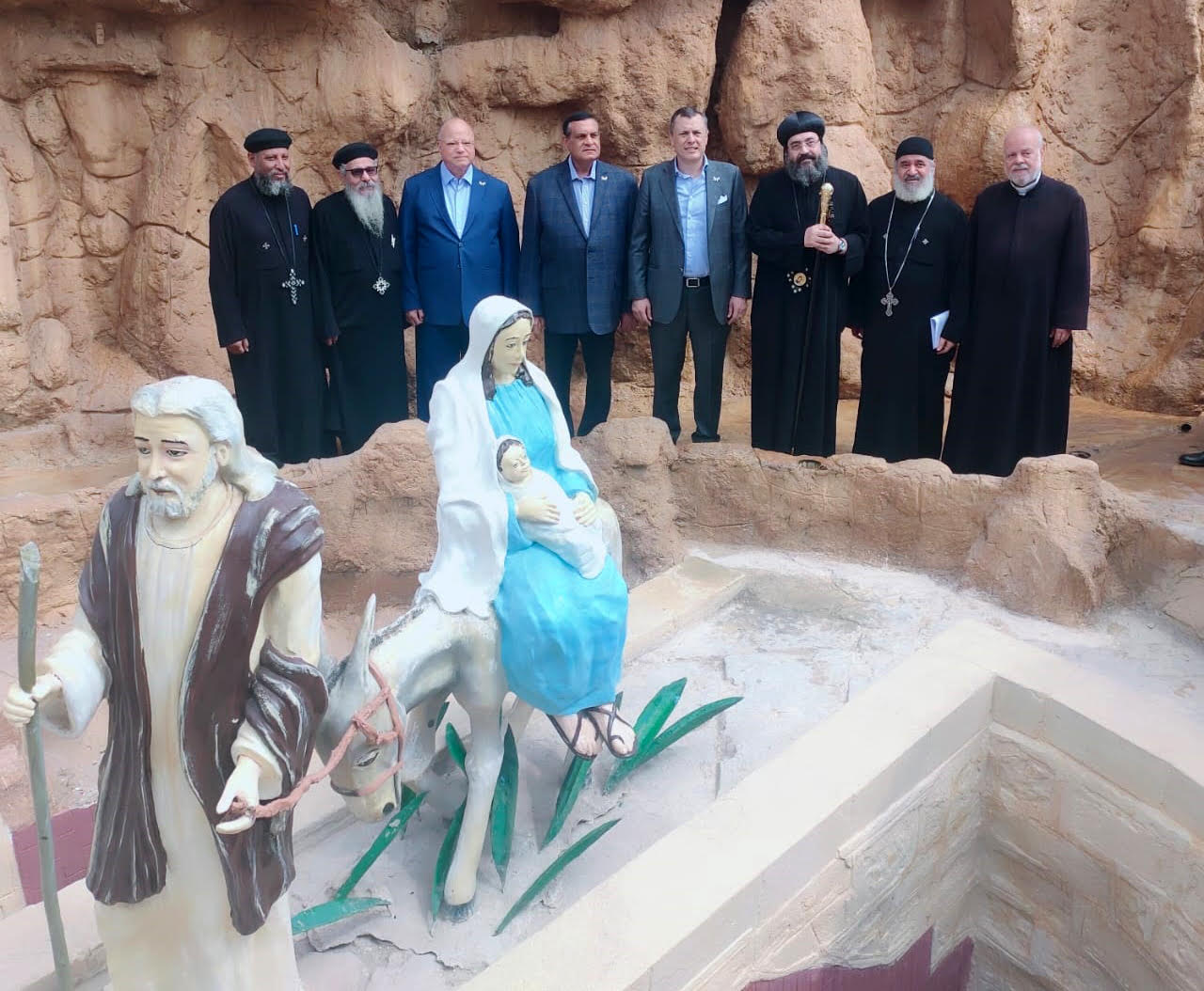 The facades of 37 houses in the vicinity of the tree were painted, at a cost of some EGP5 million. This task was done by the locals, led by the Islamic charity al-Gameia al-Shareia, a feat that pointed to the affection that binds Copts and Muslims in the area.

The roads leading to and from St Mary’s Tree site were freshly paved, and signposts bearing the slogan of the Holy Family Trail were installed. The passageway between the tree and the Holy Family Church was upgraded. The front garden was spruced up to act as a beautiful backdrop to the tourist drop-off point. The site was provided with shaded seats for the guests, also adequate restrooms.

A modern illumination system was installed to bathe the tree and its surroundings in gentle, attractive light during evenings.

It was important to secure the site through installing electronic gates, surveillance cameras, and alarm systems.

A hall was erected to use for screening films, documentaries or electronic visual material, and a large map of the Holy Family Trail in Egypt is on display.

The site has been made accessible to persons with disabilities, and pamphlets in Braille are available to those with sight impairments. 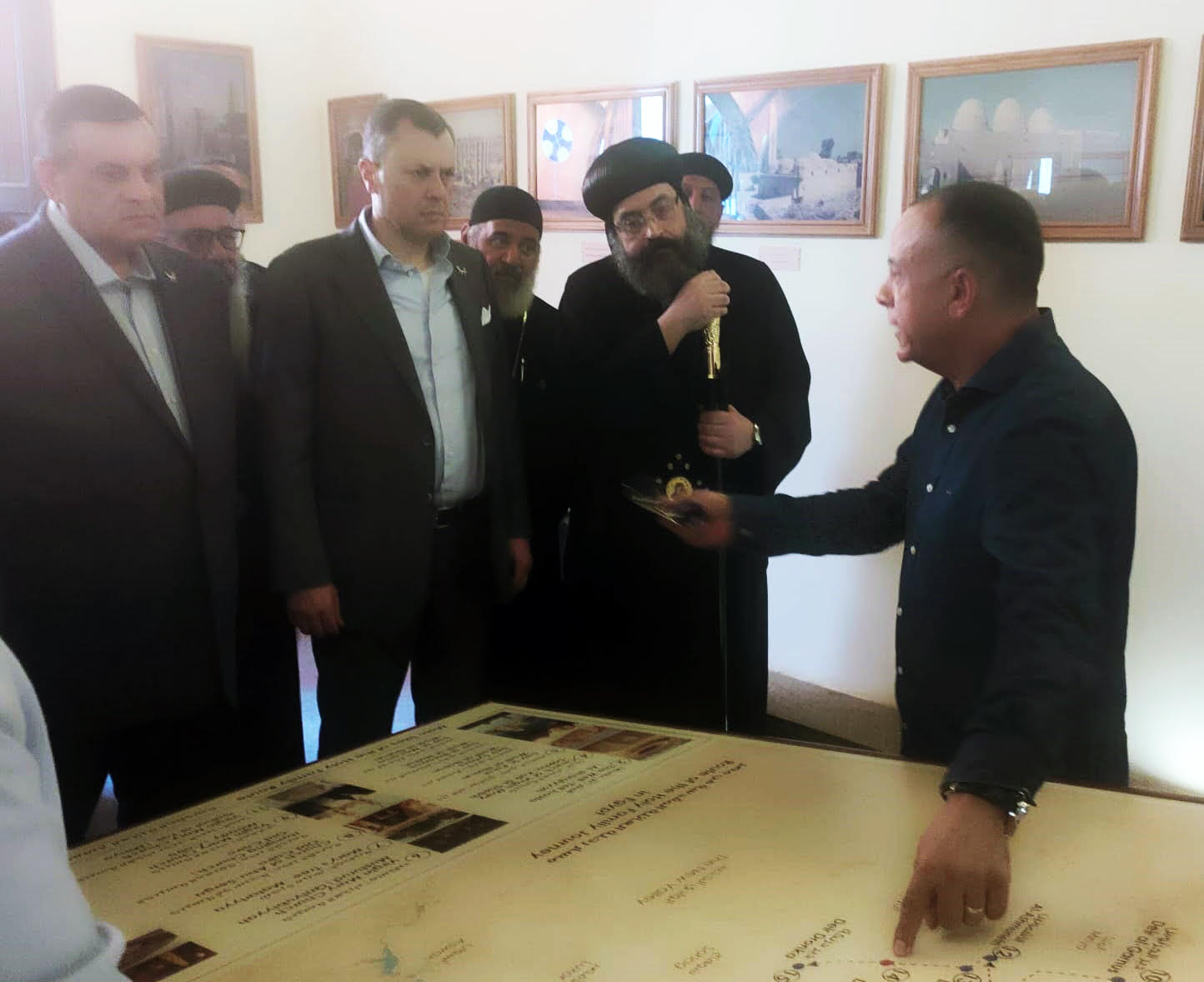 The current tree, according to the archaeological officers in the area, is around 80 years old and is the third generation—the granddaughter—of the first, original tree which sheltered the Holy Family. The ‘grandmother’ tree, the first generation one, fell in 1656, but Franciscan monks attempted to preserve it, propping it up and nurturing it till a new one sprouted from the old roots in 1672. The monks had asked to take the fallen tree but the Coptic Church refused and instead allowed them to collect branches out of the daughter tree. A third generation was grown out of the daughter tree some 80 years ago, and now stands on the site, still producing leaves.

The dried-up remnants of the daughter tree are today on display inside the fenced area in the garden surrounding the site.