Young Egyptian soprano Laura Mekhail from the city of Minya, some 250km south of Cairo, has been declared the second recipient of the Andrea Bocelli Foundation – Community Jameel Scholarship, the Royal College of Music in London has announced.

Laura began singing as a child, a member of her church’s choir in Minya. She later studied music performance at West Virginia Wesleyan College in the United States, where she was elected a member of the acapella choir working closely with Dr Dan Hughes, Director of Choral Activities, whom she credits with heavily influencing her vocal development. After graduation, Laura taught singing for a year at Chesterbrook Academy, and six years in Cairo, before deciding to pursue a career as a professional soloist.

Laura has performed at the Cairo Opera House and counts a range of influences on her singing, including Bach and Rossini; Egyptian and Syrian divas Umm Kulthum, Fairuz, and Sabah; and Egyptian tenor Abdel-Halim Hafez.

Laura Mekhail said: “Although I have been enjoying my career as a teacher, nothing makes me feel more alive than standing on stage and performing my classical repertoire. This is why I’m so passionate about studying at the Royal College of Music, which will offer me the opportunities to strengthen my qualities as a singer, explore my vocal capabilities and develop my performing skills to reach a professional level. Without the support of this scholarship, achieving my dream would not be possible.”

Launched in 2019 to support students at the Royal College of Music, the Andrea Bocelli Foundation – Community Jameel Scholarship is awarded to talented musicians, chosen both on merit assessed at the audition level and their need for support to overcome barriers and access the world-class training available at the Royal College of Music. This scholarship was established by the Andrea Bocelli Foundation, founded by world-renowned tenor Andrea Bocelli, and Community Jameel, an international organisation supporting science and technology to tackle global challenges.

George Richards, Director of Community Jameel, said: “Laura is an exceptional talent and we are delighted to be able to support her on her journey as a musician and performer. Community Jameel is committed to improving access to quality education for all – including in music – and we are excited to be supporting international students, including those from the Arab world, to study at one of the world’s greatest conservatoires at a time when support for the arts is needed more than ever before.”

Stefano Aversa, Chairman of ABF, said: “It is an honour to be able to support another talented student on their way to achieving their dreams. This scholarship is in line with our mission to empower people and communities worldwide, and we’re glad we can empower Laura to develop her skills and achieve her full potential by learning at one of the world’s greatest conservatoires.”

Laura is the second recipient of the scholarship following Clara Barbier Serrano, a soprano, who received the scholarship just last year. Since receiving the scholarship Clara has performed alongside Andrea Bocelli at the ‘Believe in Christmas’ concert last December as well as at the ABF’s 10th anniversary celebration, where she was pleased ‘to give back’, as she said. 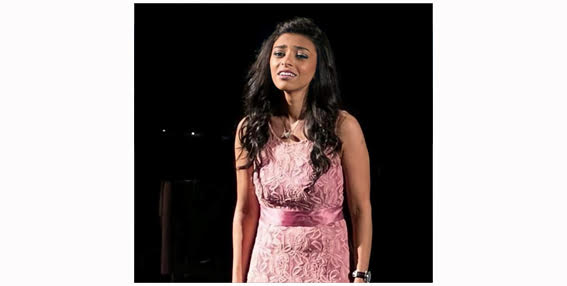