‘Copts in Modernity’ concludes in Melbourne

The Copts in Modernity Symposium, organised by the St Athanasius College (SAC) in Melbourne, concluded on 16 July. The three-day symposium was co-hosted by SAC and the University of Divinity (UD) from 13 to 16 July 2018 at the Eporo Tower, the SAC campus in the heart of Melbourne, which offers state of the art facilities.

Twenty nine scholars from 10 countries over five continents participated in the symposium. SAC hosted an official dinner in their honour on the evening of Sunday 15 July. The symposium focused on the history of the Coptic Church and community between the 18th and 21st centuries. Participants presented papers on a variety of topics: Patriarchs who led the Coptic Church into the modern age, such as the Cyrils IV, V, VI, and Pope Shenouda III; Church lay reformers including Habib Girgis who was canonised by the Coptic Church in 2013; Coptic art and architecture; theological issues; teaching and education; ecumenical relations; Copts in Egyptian politics; Coptic media; saints and hagiography; gender issues in the Diaspora.

Under the title Modernity Treasures a photo exhibition showcased photographic gems from Coptic Egypt’s modern era. A bookstall featured a range of publications by participants in the symposium. 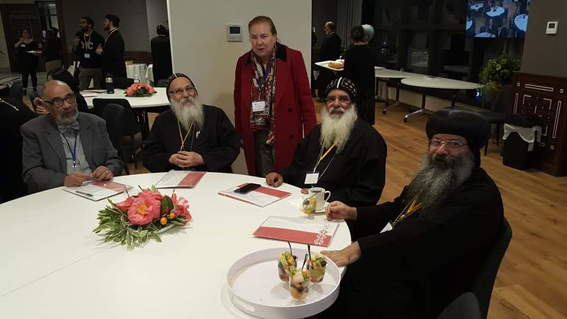 The symposium opened with a word form Anba Suriel, Bishop of Melbourne, who welcomed the attendees and pointed out that the field of Copts in Modernity was a wide, multifaceted one that was under-researched so could do with a lot of study.

Professor Peter Sherlock, Vice President of UD, spoke of the great challenge that faced the Coptic Church as Coptic communities in the diaspora as they spread and grew.

Anba Martyros, Bishop of the Churches East of the Railway in Cairo, read a paper on monastic revival in the monasteries of Wadi al-Natroun in Egypt’s Western Desert during the time of Pope Yu’annis XVIII in the late 18th century. According to sources of Church history, the number of monks in Wadi Natroun’s four monasteries of al-Surian, Anba Bishoi, al-Baramous, and Abu-Maqar, saw a sudden leap in 1780: from a mere 10 – 14 during the 100 preceding years to a full 78 monks. This could not have been haphazard, Anba Martyros said, and required research into the possible reasons. Study showed that it could have owed to two reasons. First, the oppressive Ottoman Empire and Mamluks who ruled Egypt and harshly persecuted the Copts had become increasingly feeble in the last quarter of the 18th century, leading to a steady rise in local Egyptian power which was more tolerant towards Copts; hence the thriving of monastic movement. Second was the advent of Coptic patriarchs who gave special importance to working a renaissance in the Church. 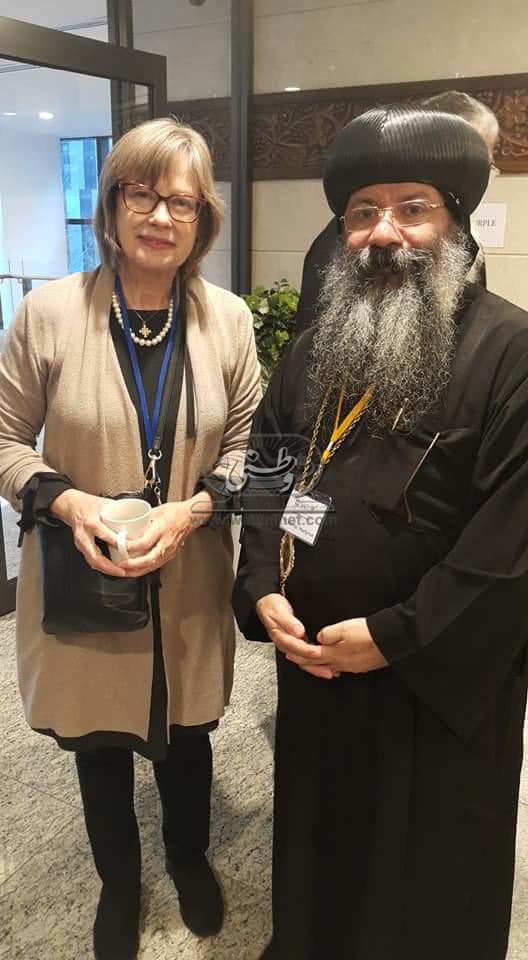 Under the title “Three Models of Creative Coptic Religious Leadership”, Professor Nelly Van Doorn-Harder from Wake Forest University in North Carolina talked of figures who left a lasting impact on the Coptic Church in the 20th century. Prominent among them were Anba Athanasius, Bishop of Beni Sweif who passed away in 2001, and Mother Irene who was Mother Superior of Abu-Seifein (St Mercurius) convent until she departed in 2006. Anba Athanasius was famous for pioneering a printing and publishing movement, and for his efforts at Sunday School teaching. He also founded the tradition of Coptic Consecrated Virgins with a vision to the vital role they could play in the service of the Church and congregation. Mother Irene achieved a quality leap in female monasticism and developmental work in convents.

Other scholars talked of other great reformers and leaders in the Church. Bishop Epiphanius of St Macarius Monastery spoke of the singular legacy of Fr Matta al-Meskeen to Christian life and studies; and Fr Cherubim Saed from Wake Forest University in North Carolina talked of Bishop Samuel (1962-1981) as an avant-garde Church leader who pioneered a great social services movement which has flourished to this day.

Fr Dr Daniel Fanous from St Cyril Theological College in Sydney spoke about the Idea of Personal Ascetic Reform as manifested in Pope Kyrillos VI who was patriarch from 1959 to 1971, and who spearheaded a spiritual movement in the Coptic Church that can be described as nothing short of revolutionary.

For her part, Dr Myriam Wissa from the University of London presented a paper on: Sixty years of leadership and Sunday Schools’ reforms…What we can learn from the work of the lay-archon Louis Zikri Wissa. 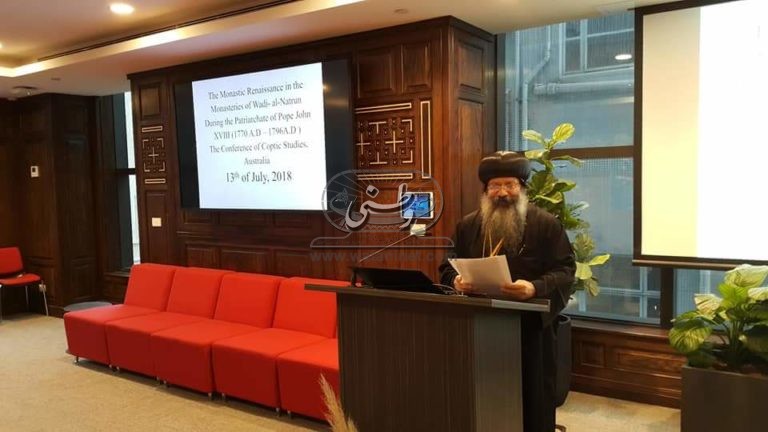 Professor Maged Mikhail of Fullerton University in California gave a lecture on the modern Coptic Church and the legacies and challenges of the Middle Ages, and Tokyo University’s Dr Hiroko Miyokawa talked of Coptic Historiographies in Colonial Egypt. She spoke of Egyptian and foreign historians who wrote about the Coptic Church, starting with Youhanna al-Naqiousi in the 7th century and through to Saleh Nakhla in the 20th century.

Mr Nicholas Ragheb, a PhD candidate at University of California, presented a paper on descriptive and prescriptive approaches to Coptic music notation, and the history of efforts to inscribe that music in notations. Dr Lisa Agaiby from SAC focused on monastic libraries and scribal practices; and Ms Candace Lukasik, PhD candidate at Berkeley, California, on the Coptic Orthodox Church and theological education in the 21st century.

Salome, a historical figure who tradition has it was a close relative of the holy Virgin and helped her deliver the Baby Jesus, was the focus of a paper by Ain Shams University’s Professor Sherin Sadek al-Gendi who elaborated on Salome’s depiction in Coptic and Ethiopian icons of the 18th century.

As for Deacon Dr Nebojsa Tumara of SAC, he gave a riveting presentation on the history of the Coptic tattoo, and its being a strong symbol of identity, resistance, and pride. Tattooes, he said used to depict the cross, the holy Virgin, the Archangel Michael, St George, or other saints. Today, Copts persist in having the cross tattooed on their right hand at the root of the thumb, or on the right wrist. Among the other topics presented was one on International Congresses of Coptic Studies and the Identity of the Copts by Professor Gawdat Gabra of Claremont University. Professor Mark Swanson of the Lutheran Theological College in Chicago talked about printing Medieval Copto-Arabic Heritage. Professor Karel Innemee of the University of Amsterdam talked of the conservation of Coptic Archaeological sites, a topic he is an authority on.

Dr Christine Chaillot from Geneva talked about the feminine diaconal service in the Coptic Orthodox Church. She explained that it began with teaching in Sunday Schools, encouraged by St Habib Girgis. It then extended to volunteer work in the fields of social care and Church meetings and activities. Dr Chaillot also pointed at the steadily rising numbers of consecrated virgins and their great services to the Church. 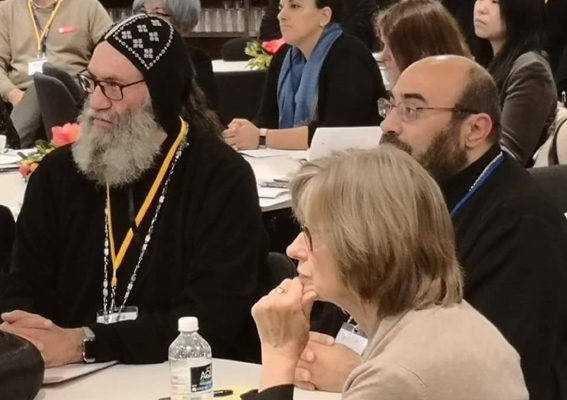 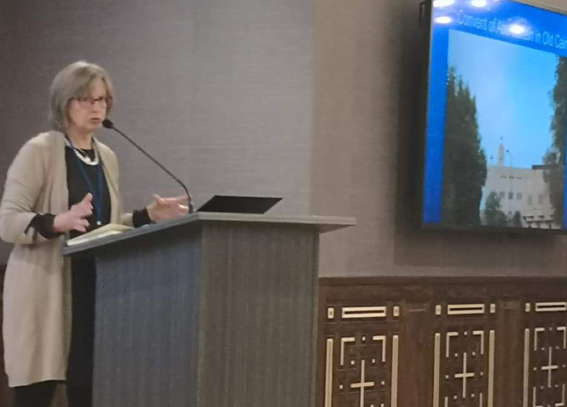 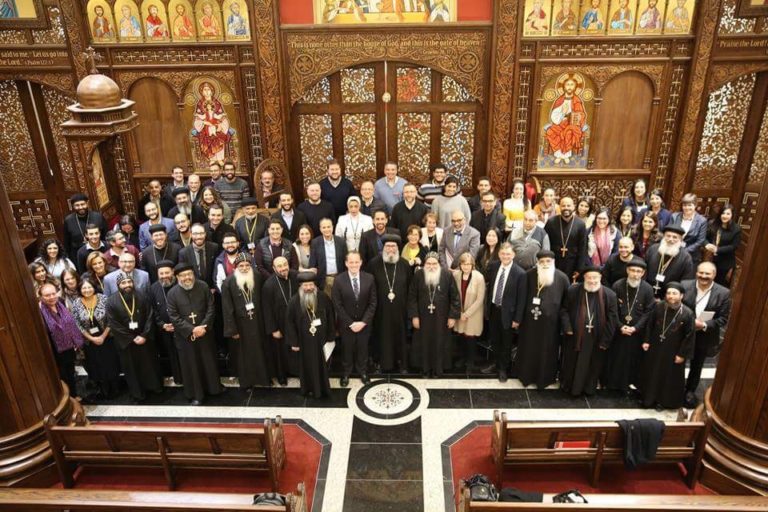