It was history unfolding in real time. Ten years ago on 18 November 2012, Egyptians—and specifically Copts—lived through an event of a lifetime: the enthronement of a new patriarch.
The ritual goes back two millennia in time, but this was the first time it was televised live in colour and in full glory, together with the respective preceding events that led to it. 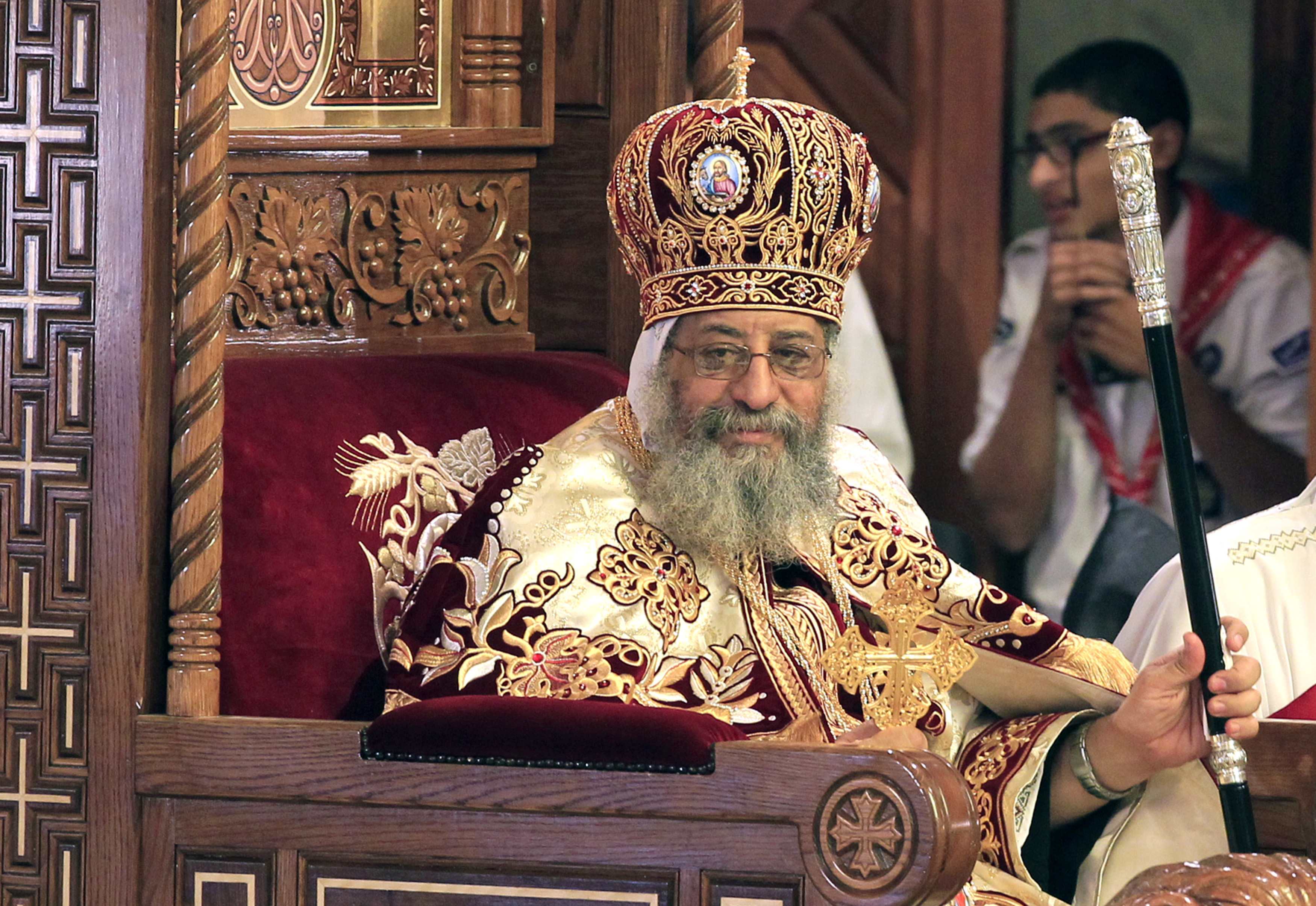 Choosing a new pope
The events started ten years ago with the passing on 17 March 2012 of the charismatic, widely loved Pope Shenouda III following a papacy that had extended for more than 40 years. Anba Pachomius, Metropolitan of Beheira took over as Locum Tenens (Acting Patriarch) and supervised the procedures of electing a new patriarch. The procedures involved updating the 2405 voter list, nominating 17 candidates for the papacy, shortlisting them to five, and the election of three from among the five, whose names would enter an altar draw.
The months-long procedure was interspersed with profound prayer and three public fasts of three days each, consecrated as a plea to God to give the Church a good pastor.
On 4 November 2012, Mass was celebrated at St Mark’s Cathedral, during which the names of the three winning candidates were placed on the altar. A lot was cast, and the name drawn by a blindfolded boy was the one chosen by God as the next pope. The name: Anba Tawadros. 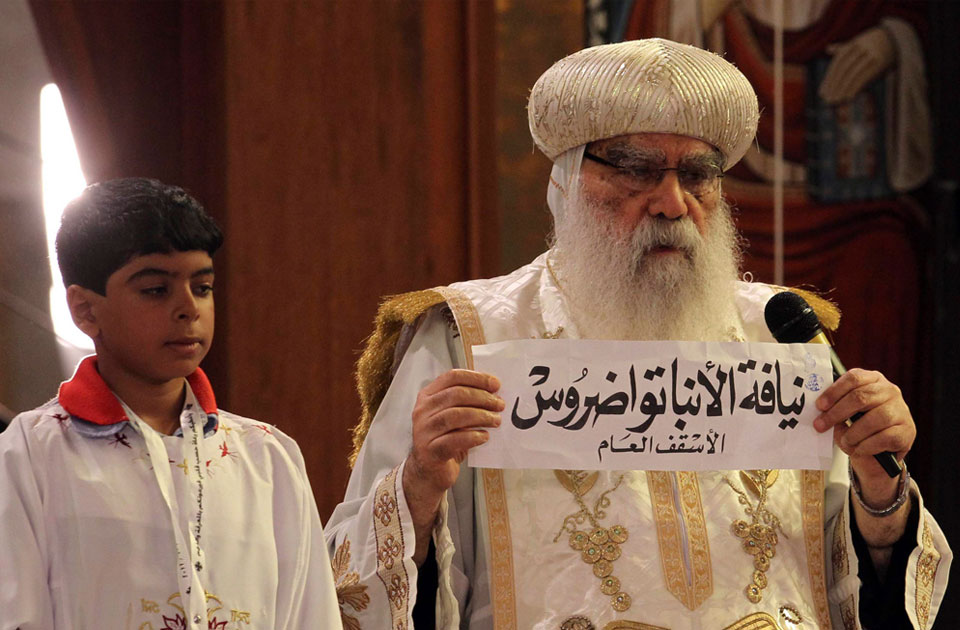 In this regard, Pope Tawadros wrote in the most recent issue of the Coptic Church’s mouthpiece, the biweekly magazine al-Kiraza, that he had then gone to his father confessor, the mild, venerable Abbot of Anba Bishoy Monastery, Anba Sarapamoun (1937 – 2020) who intently and calmly listened to all his misgivings and fears, then finally said: “All things were made through Him (John 1:3).” That sealed the matter.

The 118th pope of Alexandria and patriarch of the see of St Mark is:

On 18 November 2012, Anba Tawadros was enthroned as Pope Tawadros II, the 118th Pope of Alexandria and Patriarch of the See of St Mark. The ritual, included in a ceremonial Mass, was exceptionally moving, so much so that Pope Tawadros was in tears at several instances during the ritual. His tears were especially moving, and are still an unforgettable mark of the ceremony.

The gift of God

Marking 10th anniversary
This year, the date 18 November 2022 marks ten years on the enthronement of Pope Tawadros II as Pope of Alexandria and Patriarch of the See of St Mark.
The occasion will be marked with a celebratory Mass over which the Pope will preside on Sunday 20 November, and during which he will elevate eight bishops to metropolitans.
Four days earlier, Wednesday 16 November, the Pope presides over a four-day convention of the Holy Synod of the Coptic Orthodox Church at Logos Centre, the papal headquarters at the Western Desert Monastery of Anba Bishoy.
Numerous events were held during the period from 4 November, the date of the altar draw which is coincidentally Pope Tawadros’s birthday, and 18 November, the anniversary of his enthronement. Among these was a photography exhibition at St Mark’s Cathedral in Alexandria that documented the Pope’s ten years of shepherding. The exhibition was held under the theme title of Tareeq wa Hayah, literally, A Way and a Life.
The exhibition displayed 110 photos, documenting the Pope’s meetings with the various heads of State, also his numerous pastoral visits inside and outside Egypt, and meetings with bishops and various members of the clergy.
Among the most prominent photos were five that captured the close bond between Pope Tawadros with Egypt’s President Abdel-Fattah al-Sisi. 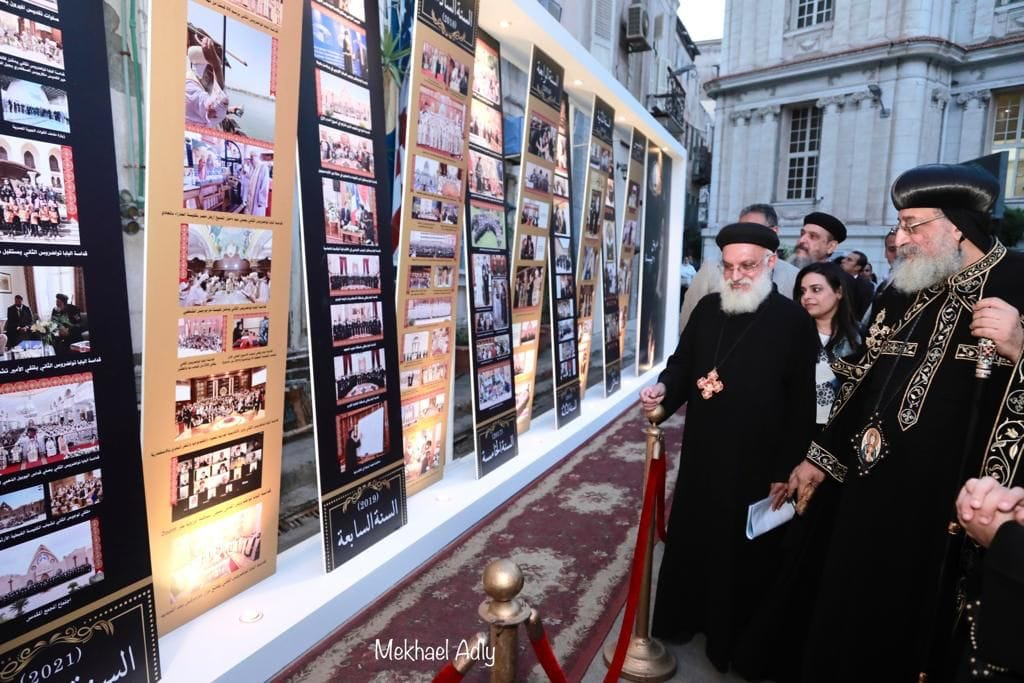 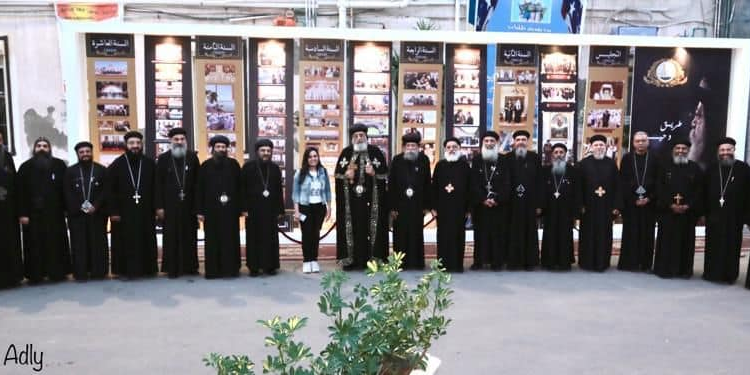 Years of love
“Pope Tawadros II… Years of Love for God and the Nation” is the title of a new book issued by the Egyptian-Lebanese Publishing House. A signing ceremony was recently hosted at the papal headquarters in the grounds of St Mark’s Cathedral in Abassiya, Cairo, and attended by Pope Tawadros.
The new book, compiled and edited by radio hostess Sherine Abdel-Khaleq, is the fruit of a number of interviews Ms Abdel-Khaleq conducted with the Pope throughout his 10-year papacy, with the aim of highlighting his time as Pope. 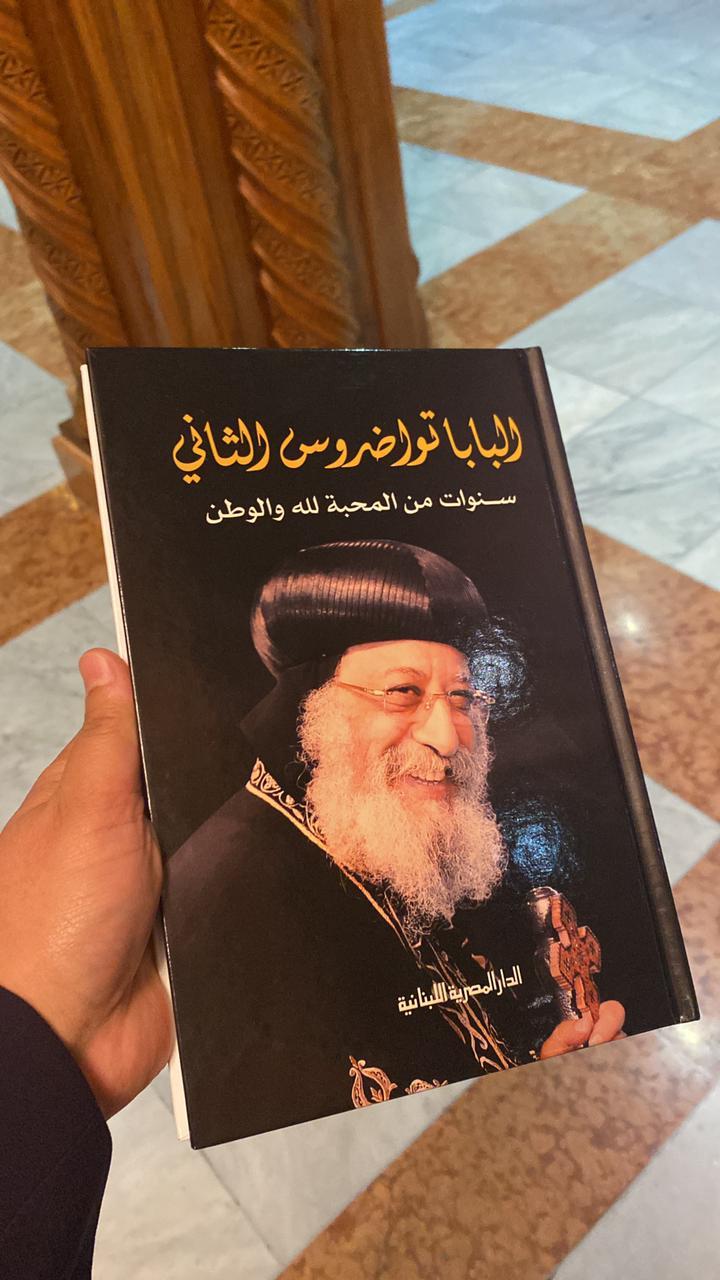 Among the high-ranking attendants was Ghada Waly, Executive-Director of the United Nations Office on Drugs and Crime (UNODC) and previous Minister of Social solidarity in Egypt; Egypt’s Mster of Petroleum, Tarek al-Mulla; Minister of Emigration and Expatriate Affairs, Soha Guindy; President of the Natiniional Council for Women, Maya Morsy; and a number of intellectuals, public figures, and clergy.

Pillar of Egyptian society
Pope Tawadros gave an opening word in which he welcomed all the attendees. Regarding the topic of the book which tackles a significant period of Egypt’s history, the Pope said: “History is life, we should conserve it.
“Our nation is precious and unique in human history. Our beloved Egypt is the only place Jesus Christ chose to visit.”
As to the Coptic Orthodox Church, the Pope noted that it is also unique among Churches. “It is the oldest entity on Egypt’s land; its roots are Egyptian and its history has been one of constant, faithful service to Egypt,” the Pope proudly said. He asserted that the Coptic Church never plays a political role; whenever the Church deals with politicians, he said, it is entirely on a national basis. 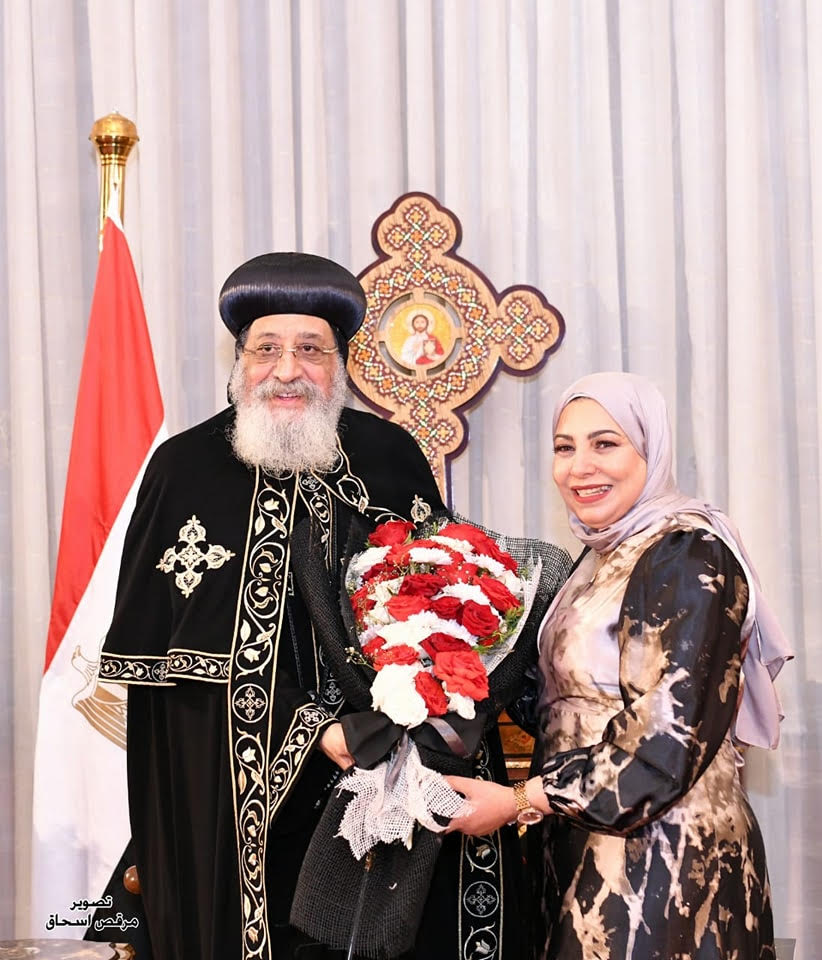 “The Coptic Church,” Pope Tawadros said, “is one of the pillars upon which Egypt stands, together with the army, police, judiciary, the Islamic institution of al-Azhar, and all economic and cultural organisations.”
Once the Pope concluded his word which exuded love for Egypt and her Church, Ms Abdel-Khaleq posed a few questions to him about incidents featured in her book concerning his personal life and historical and societal events faced by Egypt and the Coptic Church during the last ten years. His replies, according to Ms Abdel-Khaleq, served to whet the appetites of the attendants and viewers to read the book. 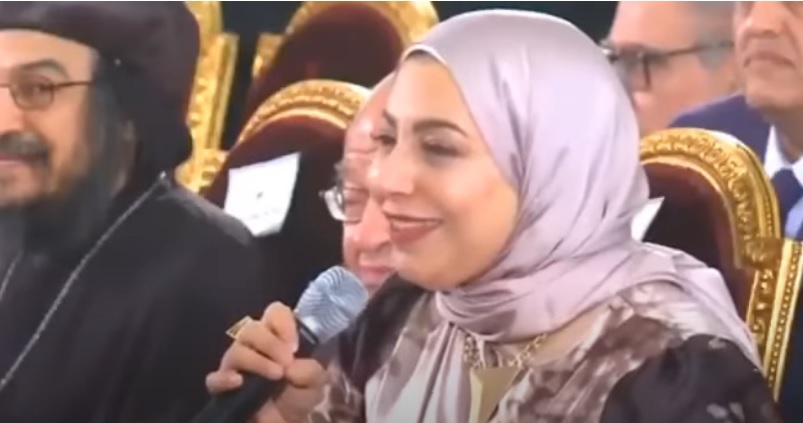 A dialogue followed in which the attendants participated with words and comments, all of which revealed their staunch respect and genuine affection for the Pope.

“He is my Pope!”
Among the most moving testimonies was one given by Ghada Waly, now based in Vienna as Executive Director of UNODC since 2019. Before she started her talk, Pope Tawadros affectionally thanked her for her incessant, faithful support for Coptic victims of terror attacks during the period in which she was Minister of Social Solidarity. Ms Waly warmly thanked him, saying she had never had the chance to adequately do that before. She described her encounters with the Pope before she left Egypt in 2020 to accept her UN post in Vienna. She recalled the horrendous terror attacks against Copts. “It was my duty as Social Solidarity Minister [from 2014 to 2019],” she said, “to offer moral and material support to the Church and the victims’ families. It was a task I dreaded because of the cruelty of the situation, yet every time I contacted or visited the Pope in this context, I found him lovingly offering me the support and comfort I so needed to give.” 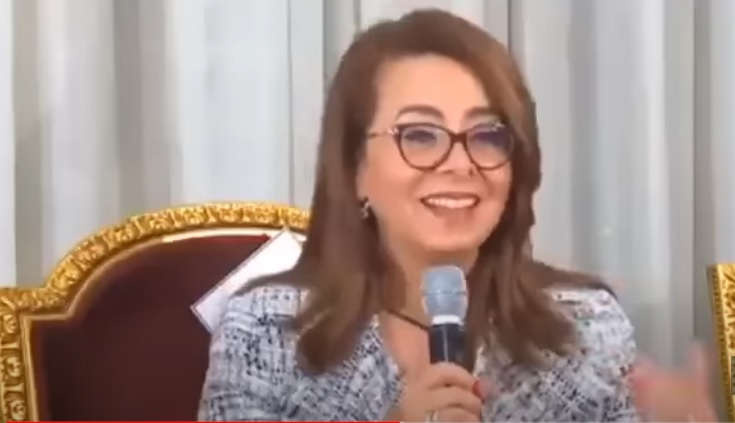 Ms Waly talked about her excitement and elation when she learned of the Pope’s visit to Vienna last July, where she is now based. Her office manager, who is not Egyptian, was amazed and told her: “Why are you so happy? He is not your Pope.” [Ms Waly is Muslim]. At which Ms Waly insisted: “But he is! He is my Pope. He is the Pope of all Egypt!
“I found out that no one in the office knew about the Coptic Church, so I explained to them all about it, also about Al-Azhar and the unique braid that is the Egyptian community which has defied all attempts throughout history to undo it.”

“Where do you get all that from?”
Maya Morsy, President of the National Council for Women, confirmed every word spoken by Ms Waly, recalling that her first visit to Pope Tawadros was on 11 December 2016, which was also her birthday, to offer condolences for the suicide bombing that blew up Boutrossiya Church in Cairo, claiming 25 lives and brutally injuring 49. She said she was at complete loss for words, only to find a calm Pope comforting her and telling her “Don’t be afraid.” She said he gifted her with a book on the Holy Family in Egypt. “I came to offer comfort which I totally lacked, but left with a calm heart and a birthday gift.” 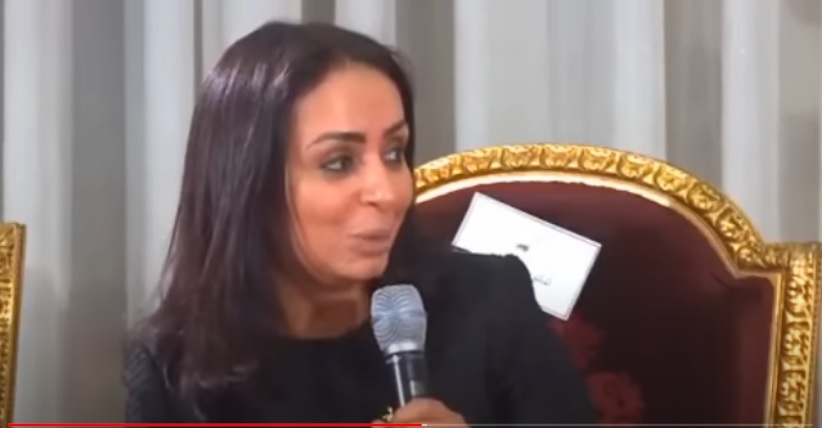 For her part, human rights activist Nihad Abul-Qomsan talked of the times of [Islamic] terror that included the early years of Pope Tawadros’s papacy, saying that all Egyptians, but especially Copts, felt threatened and terrified then, sometimes to the point of preferring to stay home and not go out. “Yet you were calm and peaceful,” she said, “and gave us all comfort and hope in the darkest times. How did you manage that? Where did you get all that comfort and hope from? All that power,” she asked. To which the Pope replied that, during any incident, a person may “see” or focus on that incident, or may choose to “see” God and hence put the incident in perspective. “God,” he said, “loves all humans, does all good, and makes everything work for the good.”

“Homeland without churches better than churches but no homeland”
The new book “Pope Tawadros II… Years of Love for God and the Nation” includes details published for the first time about Pope Tawadros’s life, since his childhood and through to his papacy.
The introduction is written by Justice Adly Mansour who was Head of Egypt’s Supreme Constitutional Court in 2013 and became Interim President of the country from July 2013, when the Islamist post-Arab Spring regime ruling Egypt was overthrown by army in full support of the massive people’s revolution of 30 June 2013, to July 2014 when Egyptians elected Abdel-Fattah al-Sisi as President. 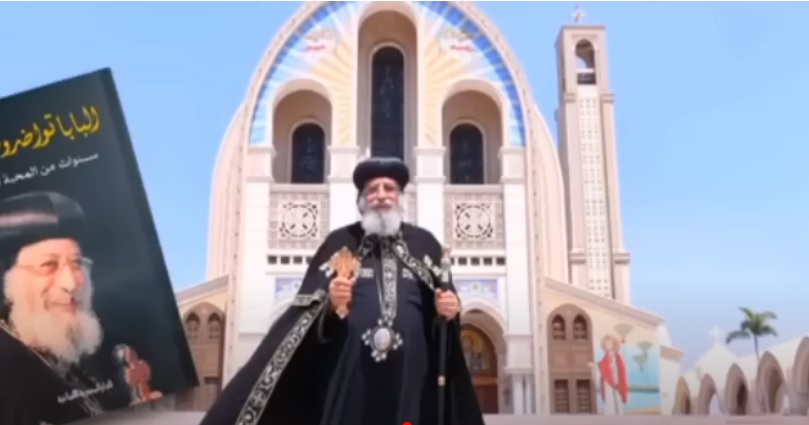 The book highlights the by-now-famous words of Pope Tawadros: “A homeland without churches is better than churches but no homeland”. These words, said in the wake of a Muslim Brotherhood-led nationwide attack that burned and vandalised some 70 churches and Church-owned institutions on 14 August 2014, have endeared the Pope to all Egyptians and have come to epitomise his love for Egypt.
The book includes reports on meetings between Pope Tawadros and a number of politicians and religious leaders from various countries, and highlights the bond of love with President Sisi.
It includes a QRcode to view a comprehensive interview with Pope Tawadros.