The prestigious German award, the Jazz Music Award, has been won by the Egyptian-German ensemble Cairo Steps together with the German band Quadro Nuevo for 2018, for their joint album Flying Carpet.

The award ceremony was held at the Berlin Philharmonie concert hall on 19 April. Egypt’s Culture Minister Ines Ms Abdel-Dayem, who is also a flautist, joined Cairo Steps at the ceremony as one of the prize recipients. Dayem often joined the ensemble as guest of honour, and had participated in Flying Carpet.

The ensemble performed at the award ceremony, with Ms Abdel-Dayem joining on the flute.

Egyptian Ambassador to Germany Badr Abdel Aty attended the event, together with many German and Egyptian musicians and an audience of around 1,200 people.

Cairo Steps is an international Sufi-jazz world-music ensemble that includes German and Egyptian musicians. It was founded in 2002 by Egyptian oud player Basem Darwish and German pianist Matthias Frey. The ensemble’s musical director is jazz pianist and conductor Sebastian Müller-Schrobsdorff.

Quadro Nuevo is a German acoustic quartet founded in 1996, known for performing world music and jazz. The band is composed of Robert Wolf, Mulo Francel, D.D. Lowka, Andreas Hinterseher and Evelyn Huber who joined in 2008. 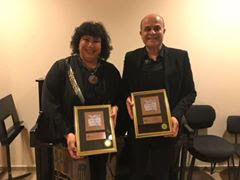 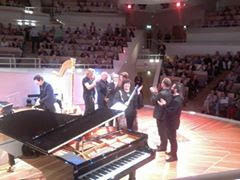