As he celebrated the 36th anniversary of his papacy in November 2007, Pope Shanouda III, patriarch of the See of St Mark at Alexandria granted Watani a special interview. Our young

As he celebrated the 36th anniversary of his papacy in November 2007, Pope Shanouda III, patriarch of the See of St Mark at Alexandria granted Watani a special interview. Our young reporter from Alexandria felt especially elated and honoured to be able to conduct this talk.
The Lord’s work
As Pope Shenouda III marks 36 years at the head of the Coptic Orthodox Church , what most stands out?
“Thirty-six years is a long time as pope,” Pope Shenouda smiled. The longest sitting Coptic pope was Pope Kyrillos V who was pope for 52 years, and the briefest was Pope Macarius III who sat for 18 months.
“A lot has happened in these 36 years, His Holiness said. It has been the work of the Lord not us. The Coptic Church has expanded worldwide. We now have some 120 churches in the United States. In Australia there are two Coptic bishops and more than 50 priests to serve the congregation. In the UK there are four bishops, two in France, two in Italy, one in Austria and one in Armenia. We have churches in Switzerland and Japan, and four in Black Africa. Especially in Africa the Coptic Church has a large following; our clergy has been baptising and teaching. In Libya we have three churches, in Sudan two bishops, as well as churches in Lebanon, Jordan, Kuwait, the United Arab Emirates and Iraq. I consecrated a patriarch for Eritrea and five bishops. All this necessitated huge efforts in training well-prepared clergy, in supervising the service and care offered to the congregation, and in fostering cordial, friendly relations with the State officials concerned. We thank God for all that.
“New Coptic monasteries have been established in Egypt and outside Egypt, and existing ones have grown and been revived. Germany, Ireland, Texas, California, Sydney, and Jerusalem are now home to Coptic monasteries. We have also established clerical colleges and schools in Australia and the US. 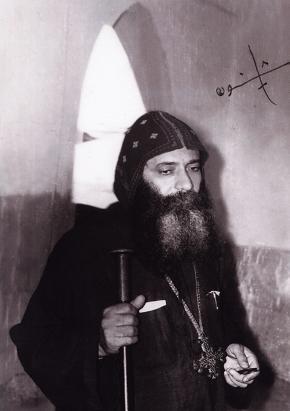 private schools is again permitted, the Coptic Church has re-entered the field, with several high-quality education schools. A technical school is also in the pipeline, to supply the vocational training so direly needed by many young men.
That warm smile
One of Pope Shenouda’s pet concerns is monastic life. Yet, Watani remarked, monasteries have not become the study centres they have the potential to be, while many produce excellent agricultural and agri-industrial goods. His Holiness commented that most Orthodox monks and nuns today have university degrees. Monasteries and convents are moreover equipped with well-stocked libraries, and many monks and nuns do valuable research.
Agriculture work, the Pope explained, serves to make monasteries self-sufficient in food supply, and is a form of hand work which is one of the basics of monastic life. But it should never keep inmates from worship and contemplation.
Finally Your Holiness, Watani asked, how do you manage to maintain your smile and your obvious love for everyone?
“I bear in mind a very important principle, Pope Shenouda said, that no matter how many problems engulf me, I deal with them from the outside; I never allow them to creep inside me. As to smiling, I believe a man of God should be cheerful, otherwise people would get a grim impression of religion.”
This interview was first printed in Watani International on 2 December 2007. We are offering our readers this reprint in honour of Pope Shenouda III who passed away on 17 March.
WATANI International
1 April 2012