The Mediterranean city of Alexandria in the north of Egypt, founded by Alexander the Great in 333BC and famous as a bastion of culture and learning during Greco Roman times and a Christian centre later, has lent its illustrious name to a province of the Anglican Church.

A recent weekend saw the head of the Anglican Church, Archbishop of Canterbury, Justin Welby, pay a four-day visit to Cairo from 7 to 10 October to offer prayers of thanksgiving and officially inaugurate the Anglican Province of Alexandria, the 41st and most recent among the Anglican Communion provinces. The Province was launched in May 2020, but official inauguration could not take place then because of COVID-19 restrictions. 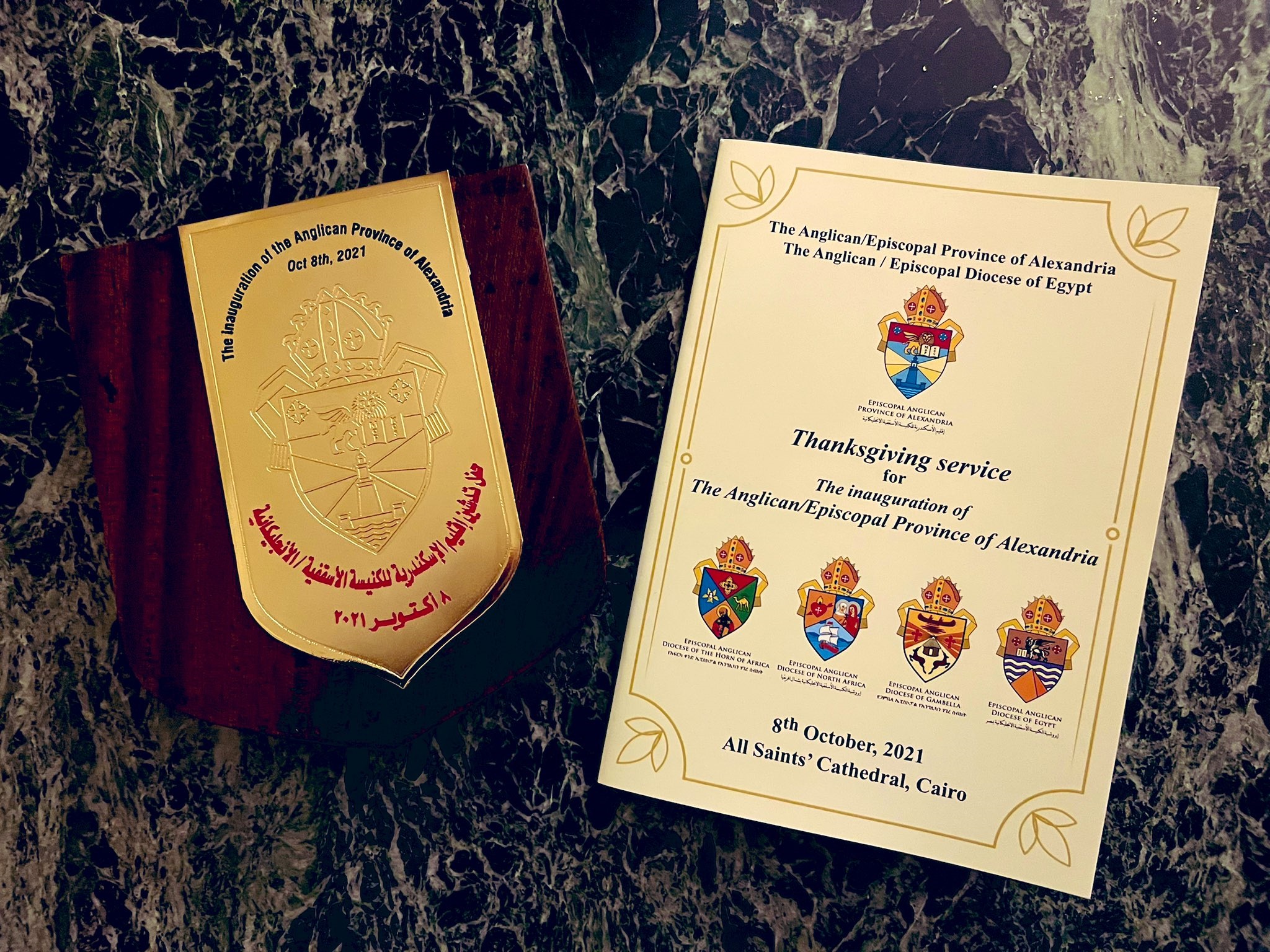 The Anglican Province of Alexandria replaces the Diocese of Egypt with North Africa and the Horn of Africa, which had grown spectacularly over the years, warranting autonomy as a separate province of the Anglican Communion. It serves 10 countries: Egypt, Algeria, Tunisia, Libya, Chad, Mauritania, Eritrea, Ethiopia, Djibouti and Somalia.

Announcing the new Province in 2020, Secretary General of the Anglican Communion, Archbishop Josiah Idowu-Fearon, said: “In recent years we have seen enormous growth in what was the Diocese of Egypt with North Africa and the Horn of Africa, particularly—but not only—in the Gambella region of Ethiopia. It was one of the largest and most diverse dioceses in the Anglican Communion and also one of the fastest growing regions.

“It is great credit to Archbishop Muneer Hanna [of the now defunct Diocese of Egypt] and the clergy and people of the diocese that this growth occurred in spite of the great cultural diversity and complex political situations in the region it serves.”

The service of thanksgiving took place on the evening of Friday 8 October at the Anglican cathedral of All Saints in Zamalek, Cairo. 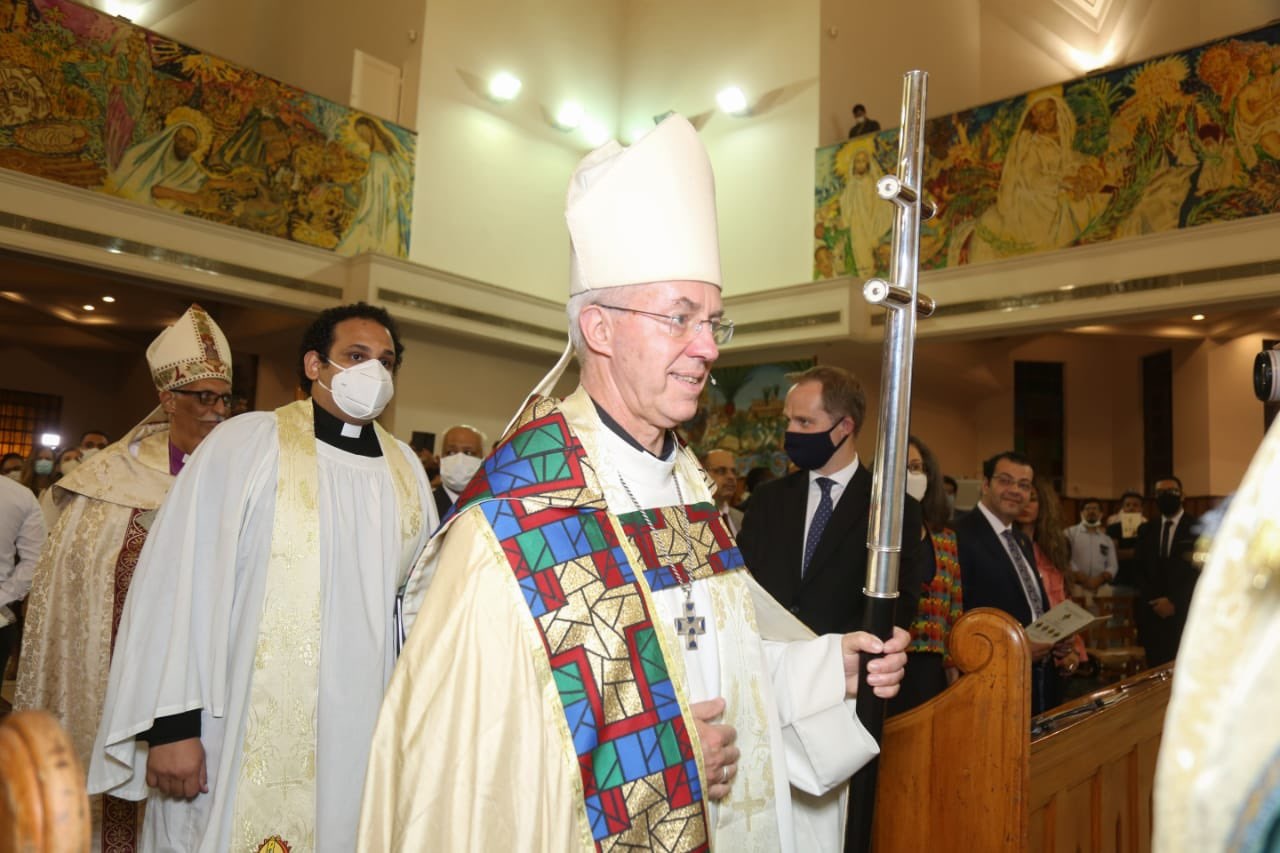 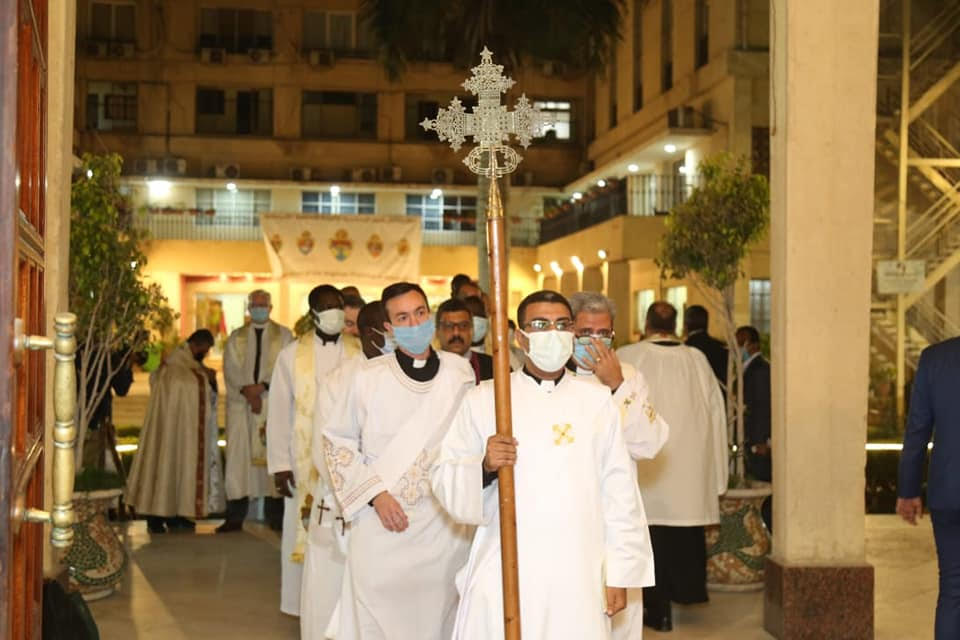 A procession of bishops and archbishops moved from the Cathedral’s yard to the church’s altar, headed by Archbishop Welby who was followed by archbishops who attended from all corners of the globe. The procession included the Archbishop of the Anglican Province of Alexandria, Samy Fawzy and Archbishop Emeritus of the Anglican Province of Alexandria, Muneer Hanna, in addition to priests and deacons.

Teams of hymn singers in Egyptian and Sudanese participated in the event, and sign language translation was offered during the ceremony, for a better inclusion of believers with hearing impairments. 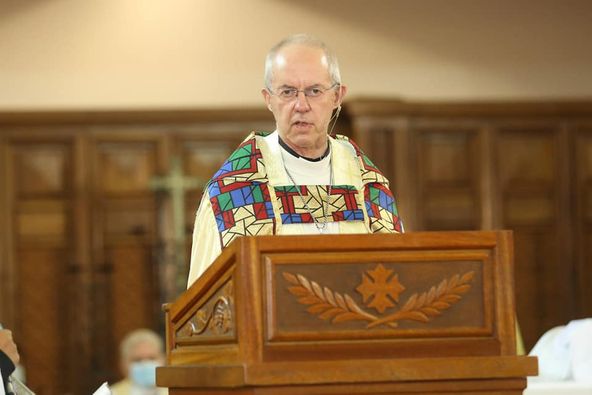 Archbishop Welby referred to Alexandria, saying that: “the ancient centre of learning is a wonderful name for the Province.

“A thousand years ago this area preserved medicine and learning. Today Egypt has again found its historic place as a place of meeting, of refuge. It has been so from before Jacob and Joseph, it rescued the Holy family. It is a crossroads of world trade, a cradle of urban civilisation when Europeans were still fighting with sticks and clubs, painting themselves blue.”

The history of the Anglican Church in Egypt dates back to 200 years ago, when a number of Anglican Christians wished to establish a place of worship during the rule of Mohammed Ali Pasha who then designated a piece of land to build the first Anglican church in Alexandria.

According to Archbishop Emeritus of the Anglican Province of Alexandria, Muneer Hanna, the Church today plays a major role in offering health and educational services, in addition to serving refugees and people in prison. It has played an important role in the dialogue between the Anglican Communion and al-Azhar,” he said.

Archbishop Welby started his Egypt visit on Thursday 7 October with a visit to St Macarius Monastery in Wadi al-Natroun in the Western Desert, some 90km northwest Cairo, where he got acquainted with the ancient churches of the monastery and spent time meditating and praying. On his Twitter account, Archbishop Welby wrote:

“Inspiring to begin this visit to Egypt at St Macarius Monastery in Wadi Natrun, founded in 360 AD. Very moving to pray in this ancient place, which has also now reclaimed 1000s of acres through innovative agriculture. Excellent spiritual conversation with the monks here.”

The Archbishop then visited a number of Anglican institutions concerned with health, social and charity work in Egypt. He affirmed the important role played by the Church in improving the lives of refugees and marginalised groups. He hailed the Anglican Church in Egypt, calling it a national Church that works on building hospitals and schools, and helping refugees. 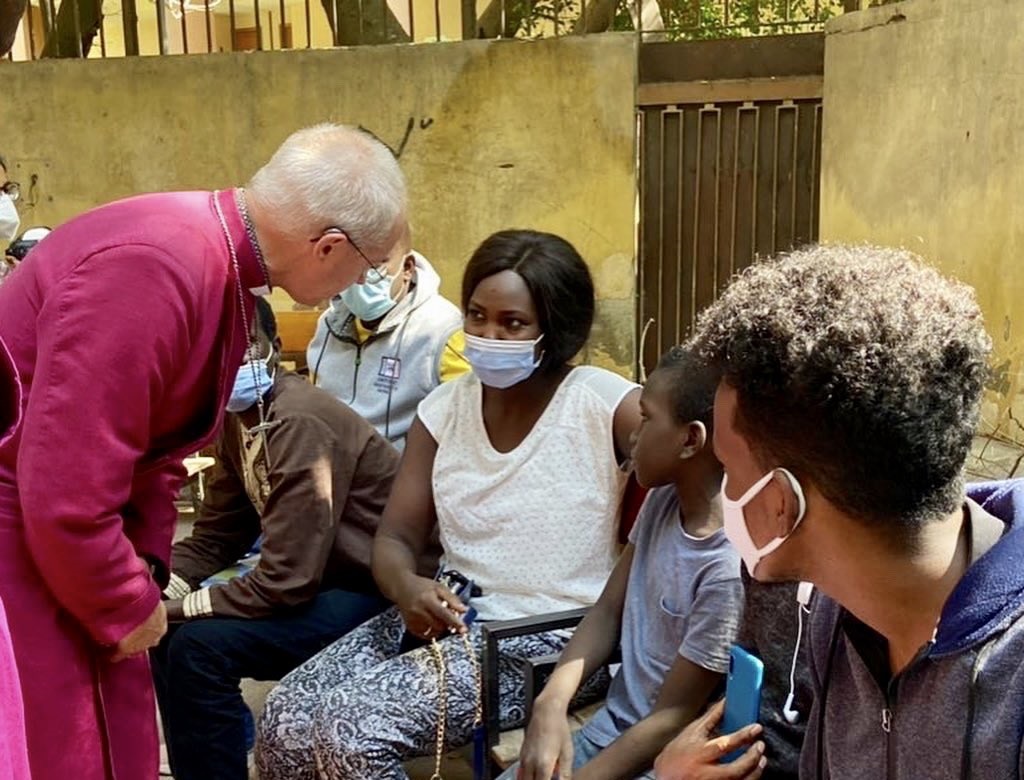 Accompanied by Archbishop Samy Fawzy, Archbishop Welby visited Harper Memorial Hospital in Sadat City, Menoufiya, some 80km northwest Cairo. He inspected its various wings, and opened a new wing for premature infants that provides services to all Egyptians at nominal prices. He was guided around by Dr Hany Abadir, director of the hospital which was established in 2011.

Archbishop Welby talked of Dr Frank Harper, who originally established Menouf Hospital to serve the poor in a floating boat, a beautiful symbol that reminds us of many Bible stories that occurred against the backdrop of water. This includes, he said, the stories of Noah, Moses, and Jonah, also of Christ sleeping in, calming the tempest, and preaching to the crowds from the boat.

In a press conference held at All Saints Cathedral, Archbishop Welby said his Church enjoys a strong relationship with the Coptic Orthodox Church, referring to discussions concerning the unification of baptism and hoping to reach an agreement soon.

He said he believes that numbers of Christians in some parts of the Middle East have decreased owing to conflicts and discrimination. In other parts such as Egypt and Jordan, he said, Christians live in good conditions. In Africa, he pointed out, the situation is complicated, especially within the borders of the newly launched province. In the Horn of Africa and Gambella, the situation of Christians is fluctuating, he explained, as in some parts of Eritrea, where Christians face discrimination.

Given that Egypt and Ethiopia, two countries within the Anglican Province of Alexandria, are in conflict over how the Grand Ethiopian Renaissance Dam would affect the Nile waters running downstream to Egypt which is almost fully dependant on these waters as its life blood, it was not surprising that the Archbishop should broach that topic. He said that negotiations are important to solve water disputes over the Nile, calling on the Ethiopian government to ensure fair use of the Renaissance Dam.

Archbishop Welby also commented on the Israeli-Palestinian conflict, saying that Palestinians have the right to live fairly without fear of leaving their lands, and hoping the Israelis can also live in peace within internationally defined borders. He stressed the need to achieve a peace process that would bring about justice and security.

On climate change, the Archbishop said that he had discussed the challenges ahead in a meeting with religious leaders in Rome a few days earlier. He called on political leaders to find solutions and help the poor, adding that religious leaders cannot solve political problems.

He said that both institutions share the same route as sisterly Churches gathered in the love of Jesus Christ. He referred to the suffering of some African nations, including poverty and civil war. Africa is a continent full of life and faith, the Archbishop said, but also full of crises.

During his meeting with Sheikh Allam, the Archbishop said that both Christianity and Islam face a common challenge in the understanding of religious texts, adding that some current rhetoric violates the teachings of the Church.

“It is normal to talk, discuss and disagree, and still be friends,” he said. “But some groups start with violence and carry arms and they use religious texts to justify that.”

He reiterated the need for religious leaders who can confront violence and extremism. Sheikh Allam said that all religions call for peace, diversity, and acceptance of others, but intellectual challenges are yet to be addressed. 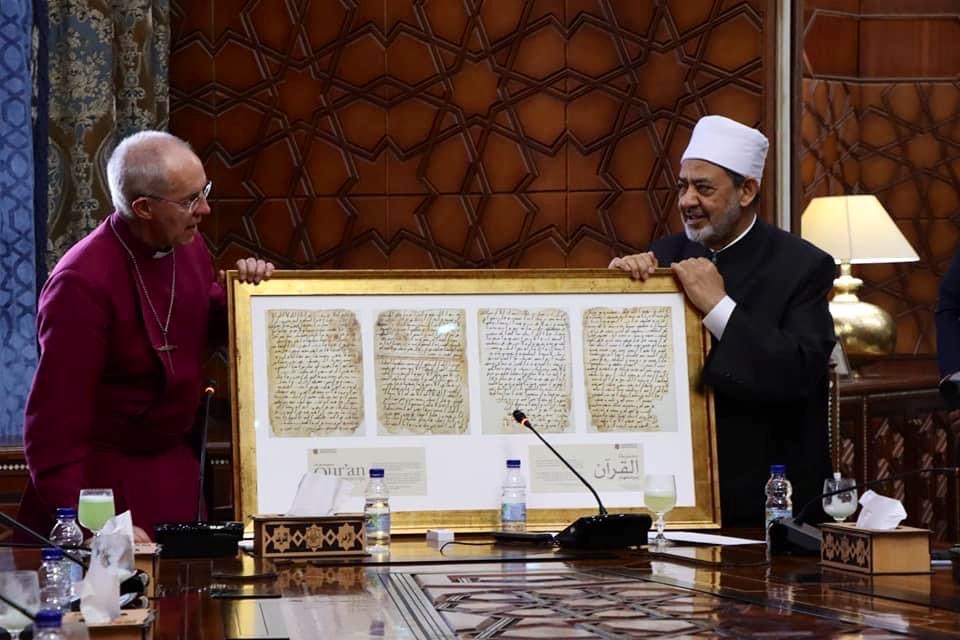 In his meeting with Sheikh Tayeb who warmly welcomed him, the Archbishop hailed his leadership of al-Azhar institution amid a difficult time in Egypt and the Islamic world. The Grand Imam, said that al-Azhar is running an important programme to train Muslim imams from all over the world to study pressing issues, including the relationship between Muslims and the other, peace, and positive integration.

On the last day of his Egypt visit, the Archbishop of Canterbury paid a visit to Pope Tawadros II at the Papal Headquarters in St Mark Cathedral grounds in Abbassiya, Cairo. The Archbishop was accompanied by a delegation headed by Archbishop Samy Fawzy, and including Archbishop Emeritus Muneer Hanna; Pakistani Bishop Azad Marshall; and Ezekiel Kondo, Sudanese Anglican Bishop.

Archbishop Welby said: “We appreciate the Coptic Orthodox Church, and value the effective role played by Bishop Angaelos in London where he has excellent relations with the government and the Royal Family. His friendship means a lot to me.”

On his Twitter account, he wrote: “It’s always a privilege to meet with His Holiness Pope Tawadros II. Very glad to have this time of conversation and prayer with him today. We give thanks for our beloved brothers and sisters in the Coptic Church and their faithful witness to Jesus Christ.” 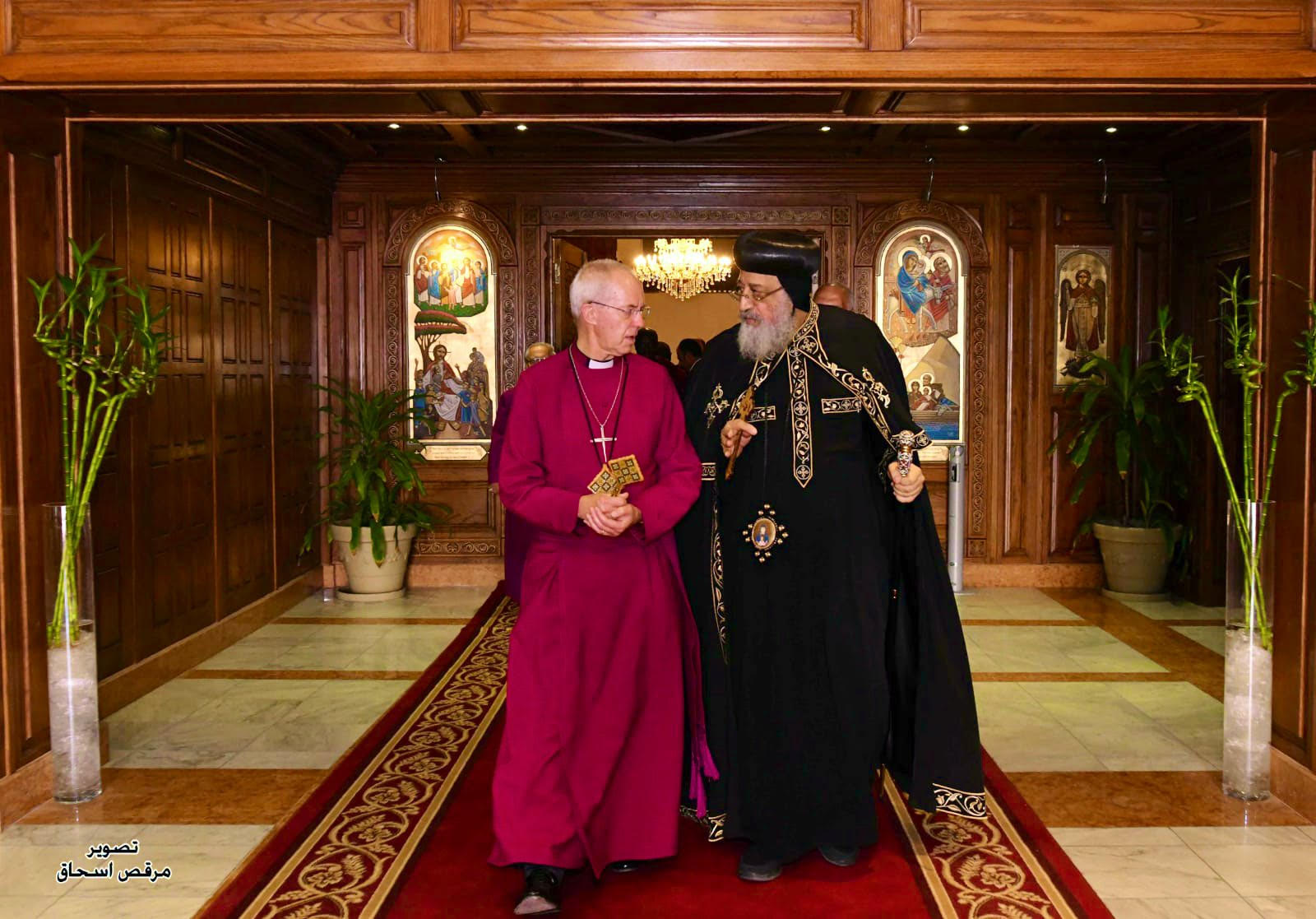 Archbishop Welby talked about the spirituality of the Coptic Church, saying that he felt it strongly during his visit to and prayers at Saint Macarius Monastery in Wadi Natrun. He said he was reading the book “The Orthodox Life of Prayer” by Fr Matta al-Miskeen (1919 – 2006), and believed it would have great impact on his thought. Fr Matta al-Miskeen, who was supervisor of St Macarius’s, was a renowned Theology scholar and a pioneer in the revival of Coptic monasticism; he wrote prolifically and his books on theology have become world classics.

Pope Tawadros congratulated the Anglican Church for the new Province that bears the name of Alexandria, a city that has had great impact on Christianity since the first centuries when St Mark preached Christianity there. He smilingly reminded that he carries the title “Pope of Alexandria”. 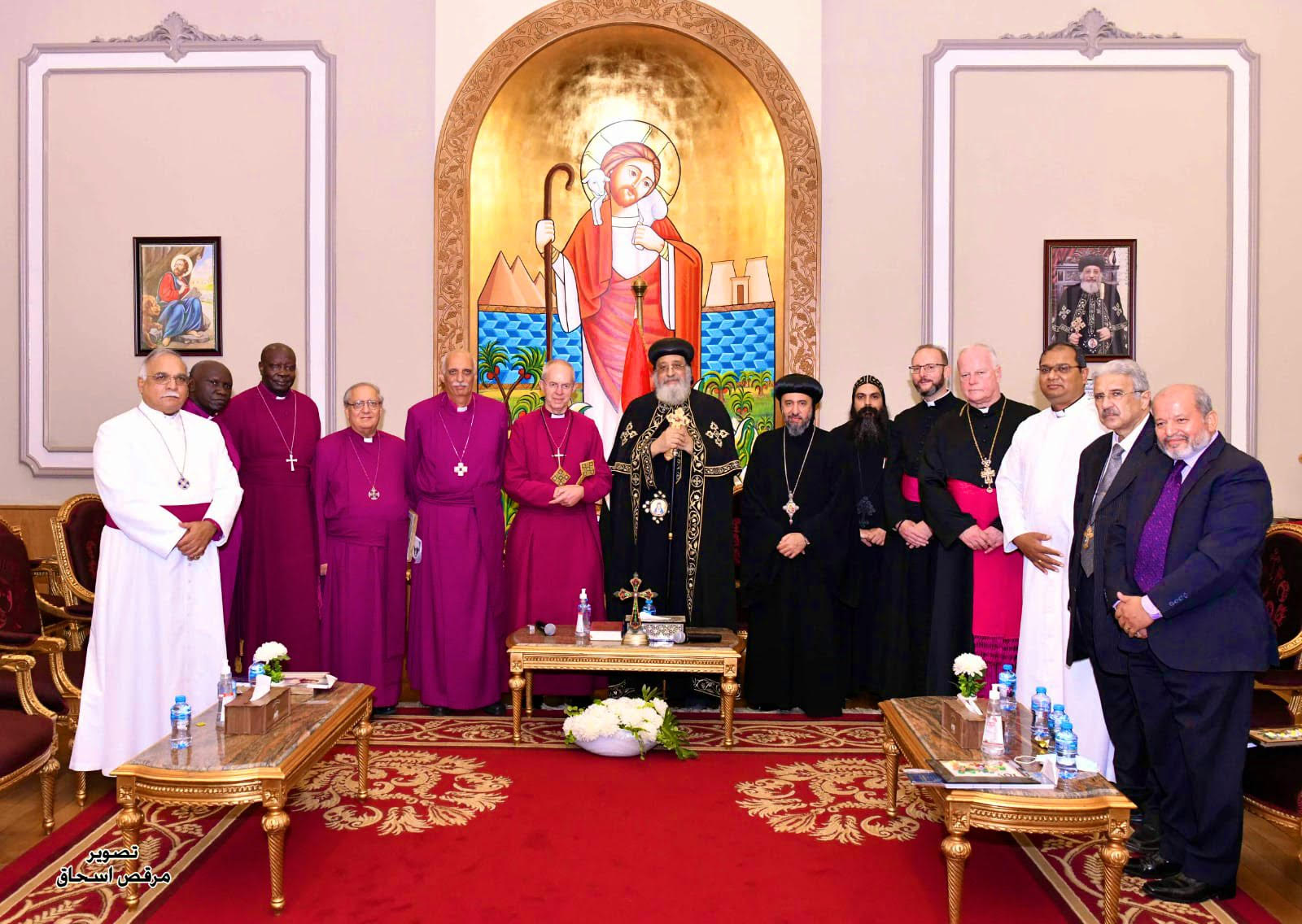 The Pope stressed that the Church’s spiritual role came even ahead of its social service which can only be done in the love of Christ. He said that dialogue between Churches should proceed with opens hearts and minds, “since we are all members of one body of which Christ is the head.”