With 2019 drawing to a close, Watani International has chosen to post a story on an event it sees as among the most significant this year had to offer, an event that takes the Coptic Church a huge leap forward into its quest for knowledge and enlightenment, and that is destined to be a hallmark in that scope. The event: the opening of the Central Papal Library at the papal headquarters in the monastery of Anba Bishoy in Wadi al-Natroun.

It was 19 November 2019, the day following the 7th anniversary of the enthronement of Pope Tawadros II as the 118th patriarch of the Coptic Orthodox Church. In a surprise, telling gesture, the Pope used the first day of his 8th year into the papacy to open what is to become a mainstay of education and culture: the Central Papal Library which he said he hoped would become the largest Coptic library in the world. 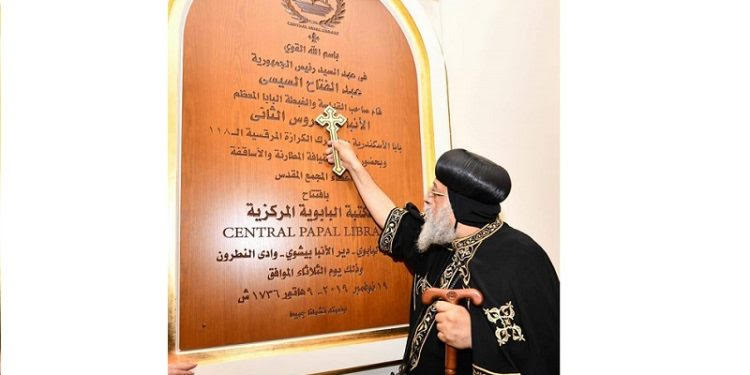 In view of the monumental nature of the event, the opening was attended only by members of the Coptic Orthodox Holy Synod; they make more than 100 bishops. But on 30 November, a visit was organised to the library for 100 laity figures: members of the Coptic Melli (Community) Council, the Coptic Orthodox Endowments Authority, the Coptic Studies Institute, Members of Parliament, businessmen, intellectuals, and media figures. I was among the lucky invitees, so it was with considerable excitement that I boarded the bus that was to take us to the monastery of Anba Bishoy in Wadi al-Natroun in Egypt’s Western Desert, where the library is located.

Once we arrived at Wadi al-Natroun, midway on the Cairo Alexandria desert highway, the bus left the main road and drove west into what is historically known as the Wilderness of Scetis, a cradle of the Christian monastic movement. Some 20km west, we arrived at Anba Bishoy’s with its sweeping, widespread grounds, modern amenities, papal headquarters, and 4th century monastery. I had expected the bus to take us to the library building but, no, it stopped at the Logos Centre, the state-of-the-art modern cultural and convention centre opened by Pope Tawadros in 2016.

Greeting us was a genial, beaming Pope Tawadros who insisted on personally guiding us around. He started with the Transfiguration Church at the Logos Centre, where he proudly explained all its details down to the extending, intertwining, seemingly interminable lines on the walls, symbolising Eternity. 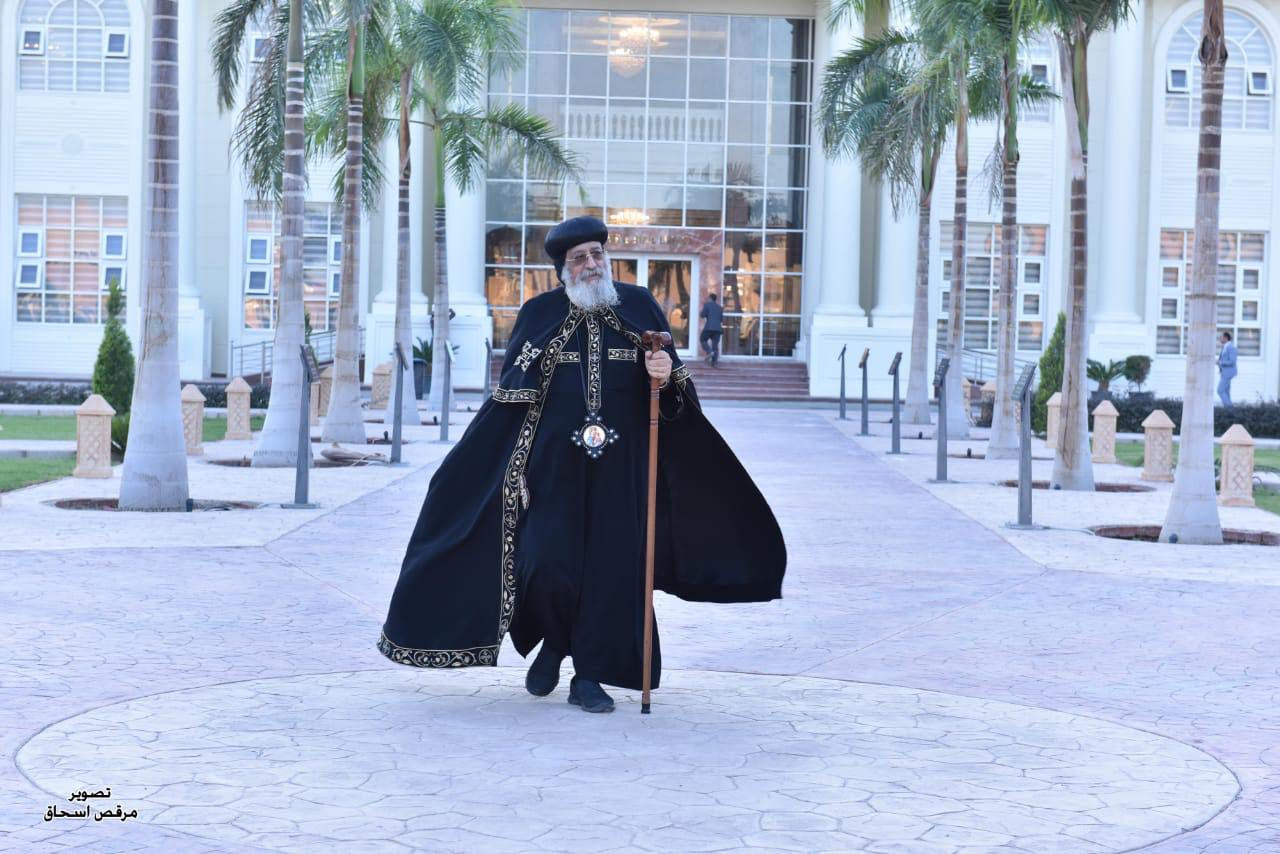 We left Logos Centre for the new library, only to discover that it was right there facing the Logos Centre; the two buildings were connected only by a pathway. But it was no mere pathway; it was lined with tall magnificent palms that penetrated the sky, standing amid greenery that stretched as far as the eye could see. Each of the trees planted there carried a label denoting the name of the Coptic parish in the Diaspora which planted it together with the name of its first bishop. Pope Tawadros had asked for each parish outside Egypt to plant a tree, in a gesture confirming the bond between the mother Church and her children around the world. The biggest tree, however, bore the name of St Mark, founder of the Church in Egypt in the first AD century; St Mark was martyred in Alexandria in 68AD. The pathway was itself given the name of St Mark. The entire setting strongly suggested the holistic role of the Church, which embodies intersecting spheres of the spiritual, intellectual, and natural worlds.

The Pope led us inside the library into the spacious entrance hall where a number of wooden panels first met our eyes. They were beautifully made to commemorate all who helped make the library see light, the names inscribed in bas reliefs on the wooden panels. Outstanding among them was the memorial plaque that marked the opening of the Central Papal Library on 19 November 2019 which corresponds to 9 Hator 1736 on the Coptic calendar, at the hands of Pope Tawadros II, during the term of Egyptian President Abdel-Fattah al-Sisi. The other panels carried the names of the architect who designed the building, Mina Maurice; and the construction engineers who built it: Magdi Charles, Emad Sobhy and Waguih Sobhy. 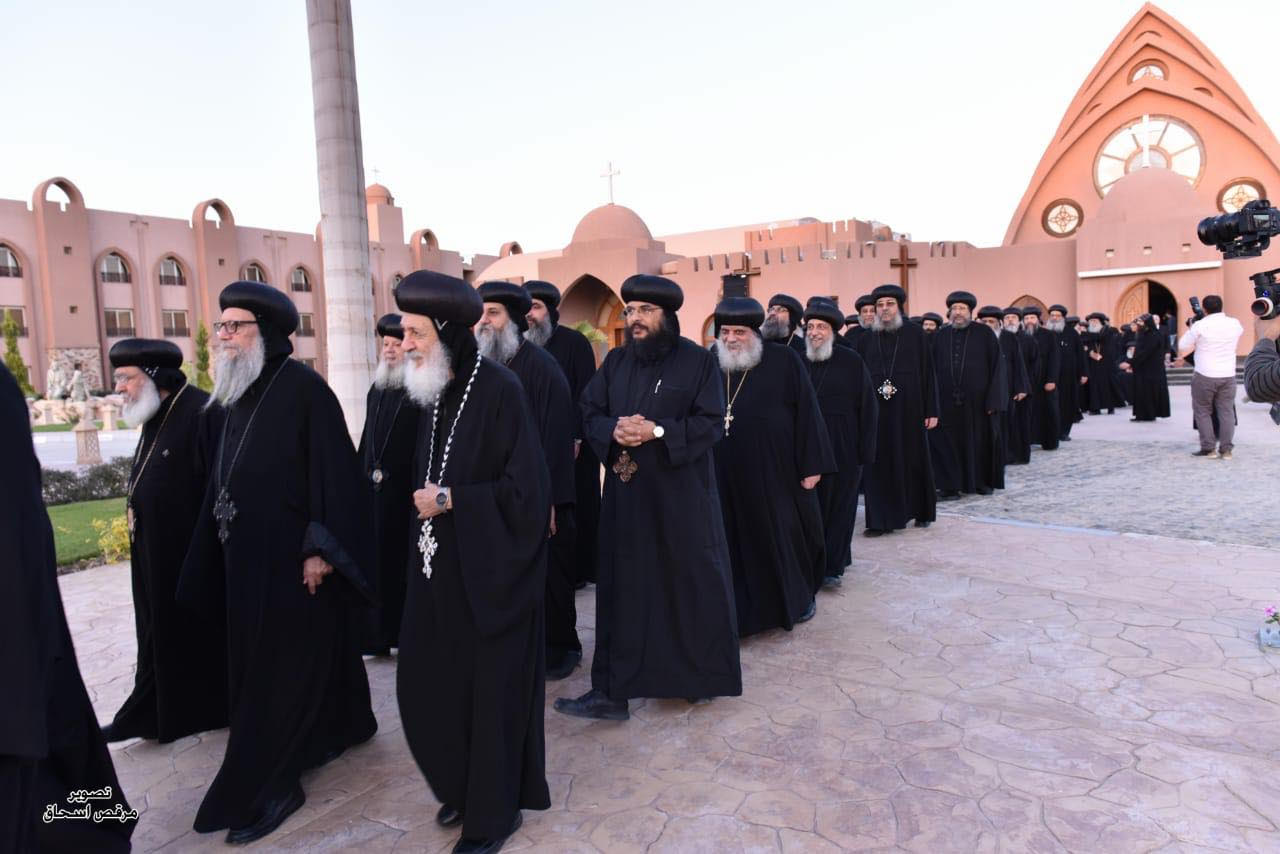 There was also a list of the donors of book or rare book collections to the library. Among these were the Antiquities Department of Lebanon, Anba Abra’am, Bishop of Fayoum; Anba Yu’annis, Bishop of Assiut: Anba Matta’os, Bishop and Abbot of al-Suryan Monastery in Wadi al-Natrun; Anba Yulius, Bishop-General of Services; Anba Dioscoros, Bishop-General; Sinout Delwar; John Salib; Marguerite Morgan; Rifaat Fawzy Garas; Samir Helmy; Abdel-Massih Antoun; and the families of Sabry Nashed, Edward Hanna, Helmy Assad, and Joseph Nessim.

Another panel carried the names of those who contributed towards equipping and furnishing the library. These included, among others, Coptic parishes in the Diaspora; SOS Chrétiens d’Orient; Microsoft; Mark Mansour; Romani Badri; and Christine Raphael. I noticed that the panels were left with blank spaces below every list. When I enquired about why the space was left blank, the Pope replied that contributing to the library was an ongoing process; there would be other names to add to the lists, he said. 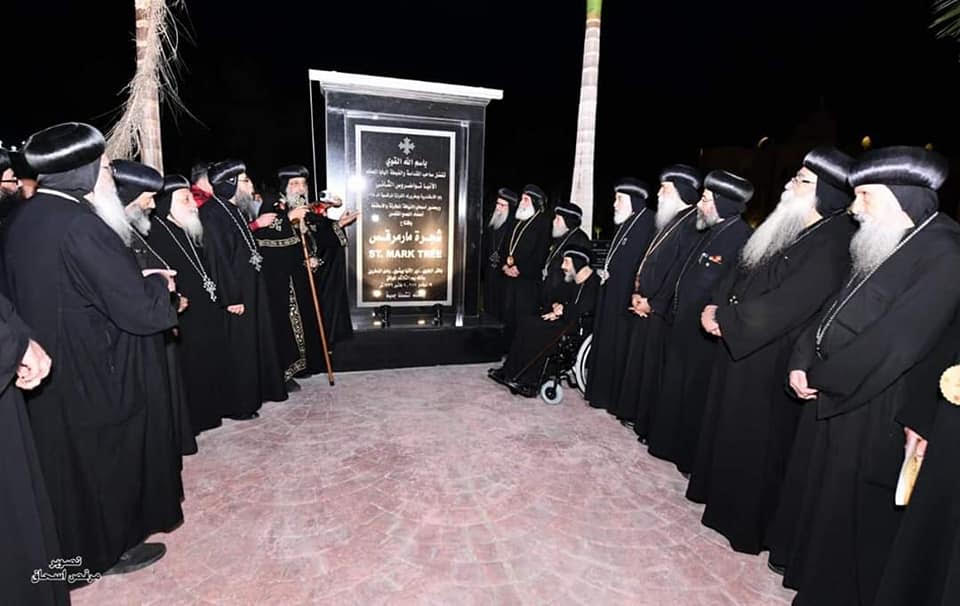 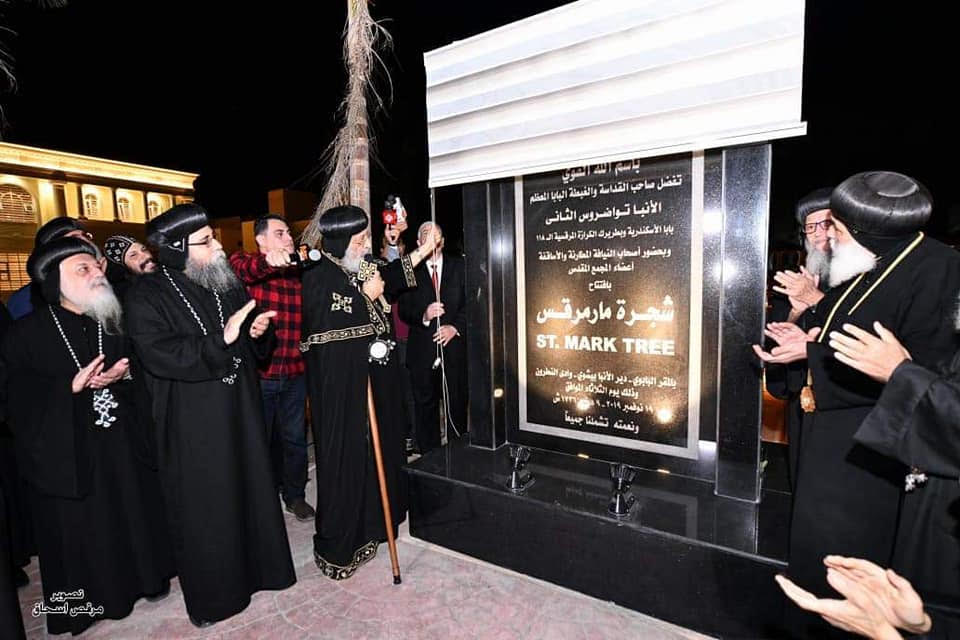 From the entrance hall we went into the library’s main hall where we took our seats and prepared to hear Pope Tawadros speak.

The Coptic Church, the Pope said, has over the ages remained a thoroughly Egyptian institution that never came under the authority of foreign powers, even if Egypt itself was for long centuries occupied by foreigners. “This means the Church has always been a repository and guardian of Egyptian heritage, culture, language, and tradition. Hence the significance of its role in education, a role the Church always took very seriously. We have Coptic institutes, seminaries and schools; also invaluable treasures of books in our monastery libraries, but we lacked a central library that would house these priceless collections, and make them accessible to scholars. 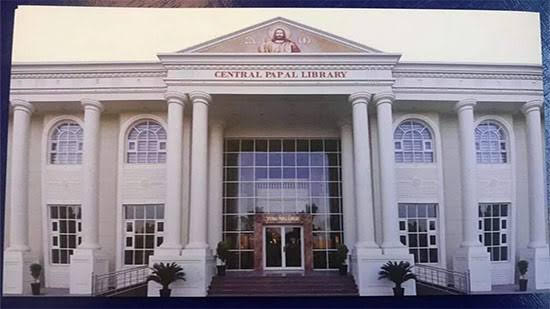 “The Wilderness of Scetis was historically a centre of Coptic monastic scholarship and, with Logos Centre completed in 2017, it paved the way for the dream of a central Coptic library to come true. Set in the heart of the dry desert, it was ideal for housing and preserving books.

“The building was designed and built by Egyptian architects and construction engineers, in the Greco Roman style prevalent during the life of Jesus Christ on earth.

“It was no easy task to build, furnish, and adequately equip the library in two years. But the grace of God allowed us to overcome all hurdles.

“At first, we had been promised financing by an Arab organisation, but when it became obvious this would delay the project, we declined the offer. Instead, the library was funded by donations from Copts inside and outside Egypt.”

The Coptic Church’s library has been named the Central Papal Library because it will be under direct supervision and support of the Pope. It was, according to Pope Tawadros, established to provide a pioneering academic space that would offer scholars a climate steeped in heritage yet rich in modern research amenities. 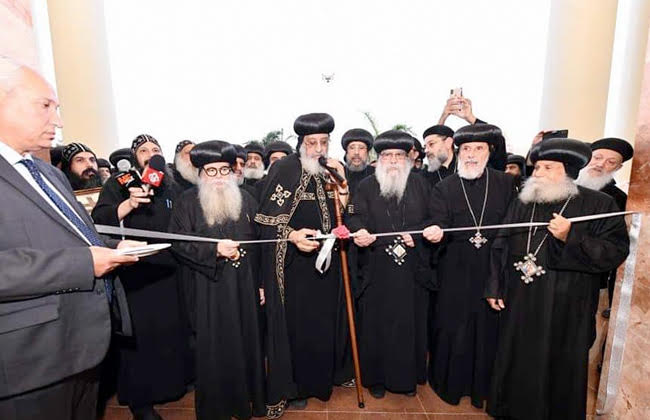 The Pope outlined the main purpose of establishing the library, a purpose that may be explained in five main aims:

The library should work to raise societal awareness in Egypt of the Coptic era, which lasted from the first to the 8th century AD, as a significant component of Egyptian and Middle Eastern history, civilisation and intellectual heritage.

It should work to preserve the wealth of knowledge produced worldwide on Coptology whether in print form such as encyclopaedias, books, studies, periodicals, newspapers or magazines; or in audio visual form in various languages.

The library should support and enhance research on Coptology, whether by promoting its publishing or translation. 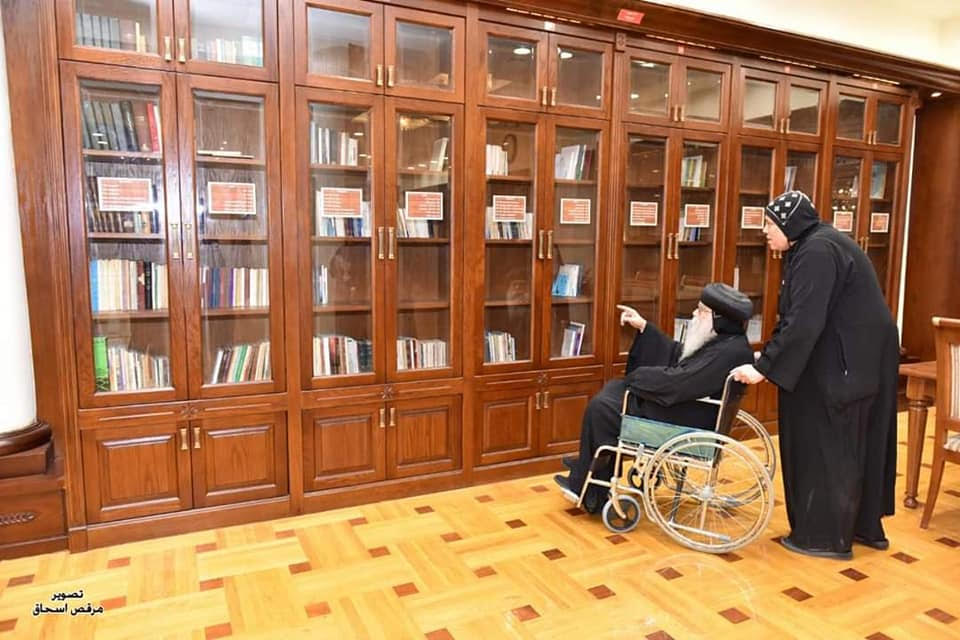 It also aims at collecting all possible material on Coptology and Coptic heritage, to make that wealth of knowledge accessible to researchers and scholars in one place.

It should collect all possible items of Coptic heritage, in coordination with Coptic monasteries, various localities, and individuals who possess rare collections or items, to restore, document, and catalogue them. It should also sponsor networking among all in the world who are interested in Coptic culture, to promote exchange of knowledge and experience among local and international scholars and researchers.

By achieving its goals, Pope Tawadros said, the library would have succeeded in taking Coptology in Egypt into the modern age.

Cross of our Saviour

It was the time to visit the upper floor of the library. Some of us decided to climb the Roman-style marble staircase with its polished wooden balustrade and crystal chandeliers hanging above and capturing the light, but I preferred the panoramic lift where my eyes were treated to the panorama of gardens and flowers on 16,000 square metres surrounding the library in the heart of the desert. 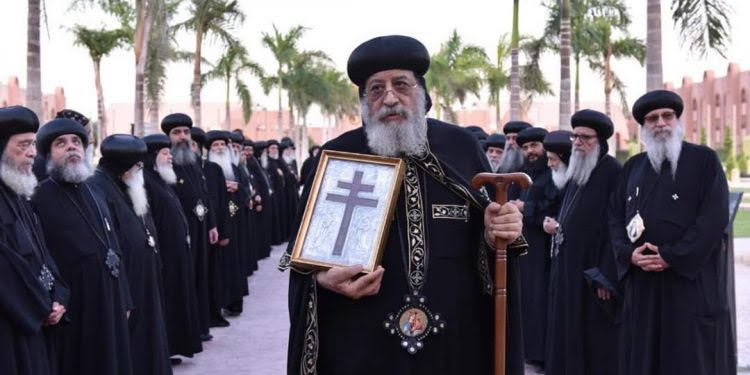 The library includes five halls. The first is dedicated to Bible studies in various languages throughout the ages; the second to theological studies; the third for general knowledge, literature, philosophy, and the arts; and the fourth and largest to all branches of human history and civilisation. The fifth hall includes periodicals published by the Coptic Church and the other Churches in the world.

There are three attachments to the library. One is a meeting room that can accommodate 50 persons; another is a 100-person-capacity lecture hall; and the third is a multimedia hall.

The central space leading to these halls is lined with showcases displaying a collection of Coptic items such as clerical vestments and acquisitions of Coptic patriarchs, also old Coptic icons. In the place of honour is a reliquary including a wooden fragment of the Holy Cross. It was in possession of Pope Shenouda III who was patriarch in 1971 – 2012, and who has been crowned by the Coptic congregation a modern-day saint. The relic from the Cross was gifted to Pope Shenouda by the late Anba Marcos, Metroplitan of France from 1974 till his death in 2008, whose family had inherited it.

Perhaps the greatest surprise of all was to find myself in the papal cell of Pope Shenouda who used to spend a weekly retreat at the monastery of Anba Bishoy. The cell had been cleaned and restored, and the architects incorporated it into the library building. 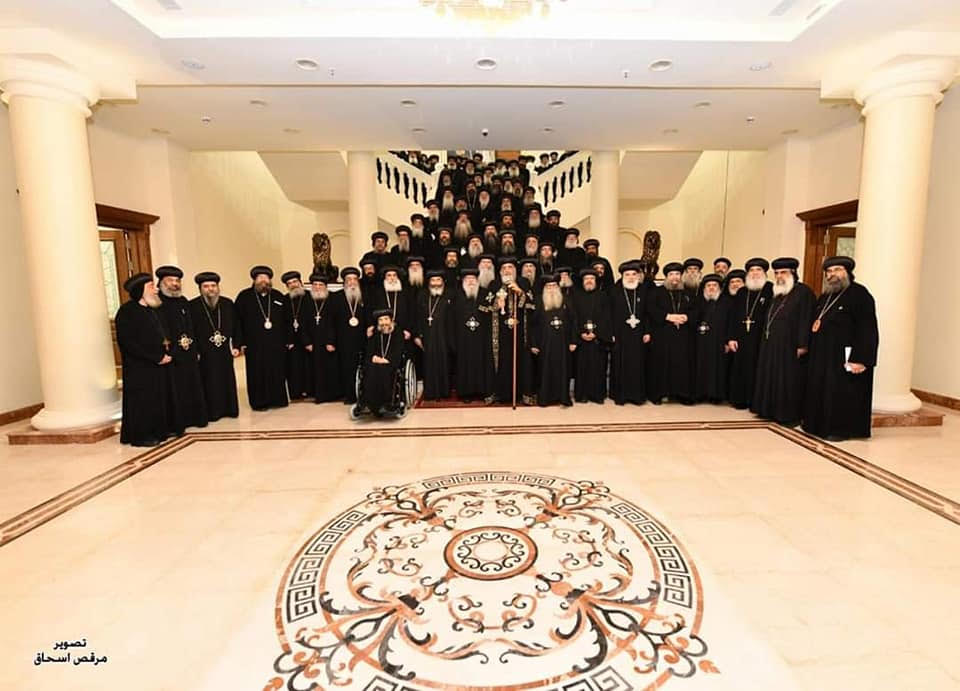 On the way back to Cairo, I found it impossible to shake off every moment I had spent in that wonderful visit. Neither did I wish to do so. A feeling of fullness filled my soul, and hope in a future bright with enlightenment and appreciation of all human knowledge. The Central Papal Library of the Coptic Church will no doubt shine to the glory of God.