The days 10 – 11 March have seen a historic event in the Coptic Orthodox Church: preparation of the Holy Chrism Oil, the Myron, for the 40th time in the Church’s history. It is also the third time during the papacy of Pope Tawadros II who became Coptic Orthodox Patriarch in November 2012.


The preparation or ‘cooking’ of the Holy Myron, the Chrism Oil, used in the Myron Sacrament, also known as the Holy Anointment or the Sacrament of Confirmation, is an event which replicates one of the oldest and most revered traditions of the Church, and which takes place ever so often in the Coptic Orthodox Church. The word ‘Myron’ is a Greek word which means ‘ointment’ or ‘fragrant perfume’. Anointment with Myron grants the seal of the Holy Spirit. The sacrament is granted to the baptised directly after baptism, through anointment with 36 crosses. The baptised then becomes a ‘temple of the Holy Spirit’. Myron is also used to consecrate new churches, altars, altar utensils, and icons.

Traditionally, Myron is prepared during Lent before Passion Week, and is completed on Shamm al-Nessim, Easter Monday, which should see the addition of the ‘yeast’ to the oil.

Tradition has it that the first who made the Myron were the Apostles from the fragrant oils which had been used for the burial of Jesus Christ and the sweet-smelling spices the women had brought to anoint the body of Jesus, but discovered He was risen from the dead.

When St Mark headed to Alexandria, he took with him some of the Myron made by the Apostles and used it in the Sacrament of the Chrism. The tradition was handed on to the successive patriarchs until Pope Athanasius (AD 298 – 373) who decided to remake the Myron in Alexandria. The original oil was, and still is today, used as ‘leaven’. 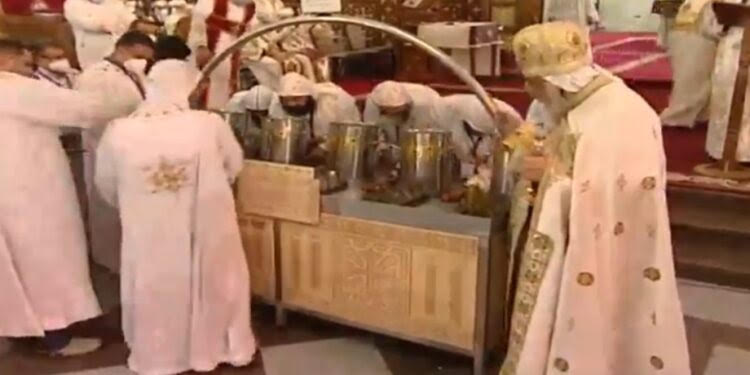 Throughout the history of the Coptic Orthodox Church, 25 popes made the Myron; some of them more than once. Among them were Pope Kyrillos VI who was patriarch from 1959 to 1971 and has been recently canonised, and Pope Shenouda III (patriarch in 1971 – 2012) who prepared it seven times during his papacy. The growing Coptic Orthodox congregation inside and outside Egypt generates more demand on the Myron, hence the need for preparing it more frequently and keeping the Church well-stocked with the holy oil.

This year, Pope Tawadros was joined by 97 members of the 132-member Holy Synod of the Coptic Orthodox Church in the Myron preparation rite. Five of the Holy Synod members are new bishops who were consecrated only two days before the Myron event. Other members who could not attend because of health reasons or COVID-19 travel restrictions authorised other attending bishops to act on their behalf.

The Myron was prepared at Anba Bishoy Cathedral at the monastery of Anba Bishoy in Wadi al-Natroun, some 200km northwest Cairo in Egypt’s Western Desert. The amounts yielded were 620 kilograms of Myron Oil, and 380 kilograms of Ghalilaon Oil.

The ceremony started with the traditional bishop procession marching, to the chanting of praises and the chiming of the cathedral bells, from the 4th century monastery to the modern cathedral. They carried the ingredients to be used to make the Myron.

Once at the cathedral, they placed the ingredients in the place prepared for them on a mounting step platform in front of the sanctuary.

Pope Tawadros said Thanksgiving, and gave a word in which he recalled the role of Myron in the Anointment Sacrament, and the origin of the Holy Oil.

“The ingredients needed for Myron,” the Pope explained, “comprise 27 special oils and sweet spices mentioned in the book of Exodus and in the the Song of Songs. Among them are the oils of cloves, sandalwood, liquid amber, and balsam. These ingredients are mixed in pure olive oil.

Traditionally, the natural ingredients, which came from the different parts of trees, were solid materials; some were found in Egypt; others were imported. They needed to be soaked or ground before they were heated, mixed and stirred to extract the oils. The process was commonly denoted as ‘cooking’, a popular description but no Church term. The mixture of aromatic oils extracted was then mixed with pure olive oil. Once the aromatic and essential oils were extracted to make Myron, the remainder material was used to make the Ghalilaon, the holy oil of rejoicing.

In 2014, Pope Tawadros announced the Church would make use of modern industrial products to simplify the making of Myron. The Church made use of the fact that the aromatic oils which were traditionally extracted through the arduous process of “cooking” are now produced at very high standard by multinational industrial firms. By buying these high quality, high purity oils, it was possible for the Church to bypass the primitive extraction process, and go on directly to the mixing process.

At the time, Pope Tawadros told Watani: “For the first time, we have bypassed the arduous step of the extracting the 27 aromatic oils. This was a time-consuming process that involved copious effort, huge 100 litre-crucibles, as well as other equipment.

“The new method,” the Pope said, “has the added value of allowing us to make a bigger quantity of Myron Oil since it simplifies the process.”

The new process, however, does not leave any remains after the extraction process, so how would the Ghalilaon Oil be prepared? Pope Tawadros explained that a simple calculation showed that the Myron Oil ingredients allowed for the preparation of a quantity of Ghalilaon Oil that was around 1 per cent of the concentration of the Myron Oil. “So we prepared that portion of Ghalilaon with the same concentration,” he said. 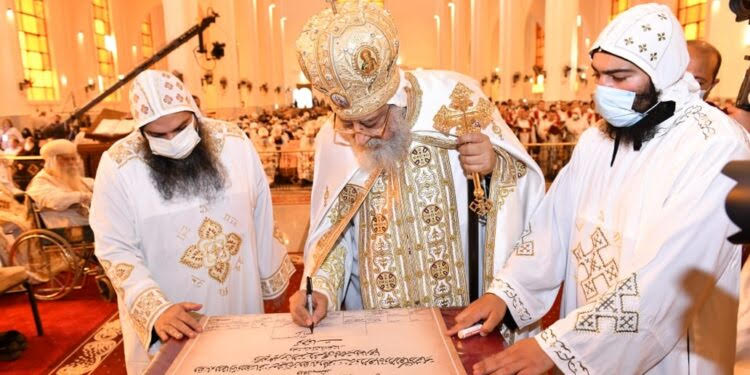 This year, Pope Tawadros said, the virgin olive oil used in preparing Myron came from the produce of the Western Desert monasteries of Anba Bishoy, al-Baramous, and Mar-Mina; and from South Sinai.

“The method of preparing Myron has changed,” Pope Tawadros said, “but the prayers remain the same.

“Myron may be prepared at any time and in any place. Traditionally, it is prepared during Lent and if placed in front of the sanctuary to be there during all the Masses celebrated, and during Holy Week prayers. This year, we have prepared it in the first week of Lent, meaning it will attend almost 50 Masses.

“Again, Myron has always been prepared in Egypt but, with our Church expanding the world over, perhaps God would give us the chance to prepare it outside Egypt.

“It is estimated that every diocese in our Church would need only two kilograms of Myron a year, so we try to prepare of Myron every three years.

“We should have prepared the Holy Oil last year, but could not do so because of COVID-19 restrictions. By this year, there was a real need for it.” 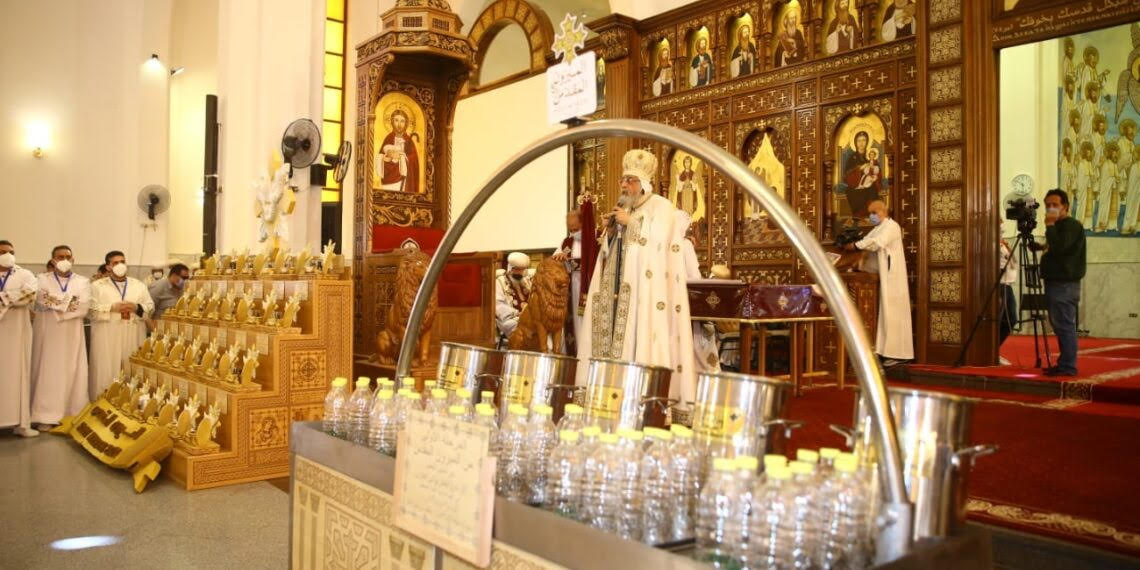 Pope Tawadros prayed: “We ask you, our Master and Lover of Mankind, to send Your Holy Spirit to this oil and bless it according to your bountiful kindness; grant it the sublime work that is Yours, the Healer, so that it would be a guard for the souls and bodies and spirits of your Orthodox servants, and a light to their hearts.” Everyone present replied in unison: “Lord, have mercy.”

According to tradition, the crucibles will remain in place till Easter Monday, Shamm al-Nesssim, when the Pope will place the ‘leaven’ into Myron Oil.

They are then left standing in front of the altar throughout the Khamasseen, the fifty days following Easter that end with the Pentecost, when the Myron Oil is finally stored in flasks and sent to the various dioceses. 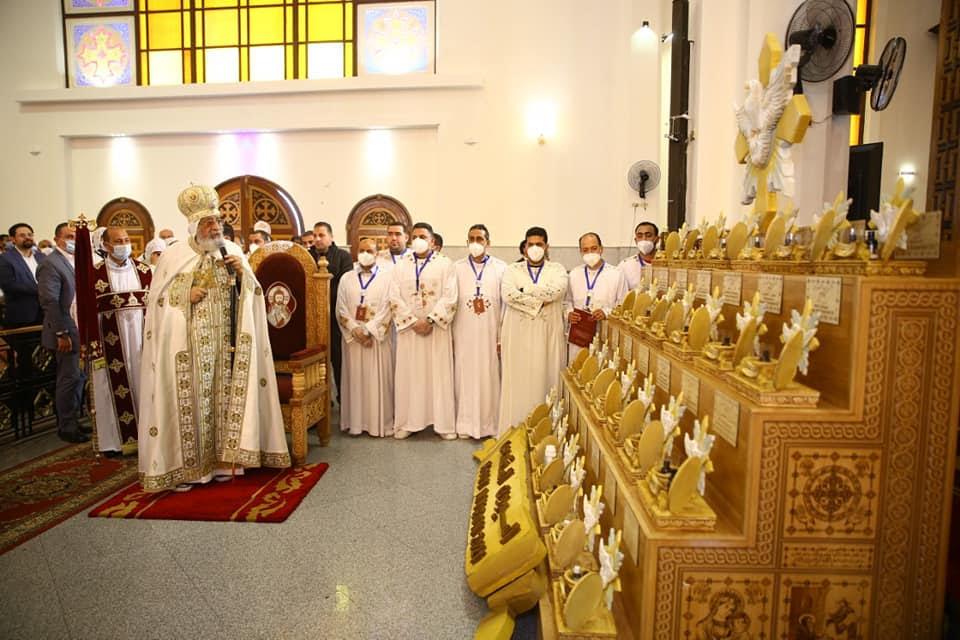 According to Pope Tawadros, and following a difficult 2020, this year has been auspicious. “By the grace of God, it was possible for the Holy Synod to convene in Cairo at the beginning of this month. We were able to consecrate bishops on 6 and 7 March, celebrate a memorial Mass for Anba Sarapamoun, previous Abbot of Anba Bishoy’s on 8 March, mark the jubilee of St Pope Kyrillos VI on 9 March, and prepare Myron on 10 and 11 March. So many joyful occasions in such a brief interval is perhaps a matter not precedented in our Church history.

“We thank the Lord for his abundant grace … May he bless us with every spiritual blessing, keep us in His holy name, and bless His Church. To Him be all glory and praise now and forever. Amen.” 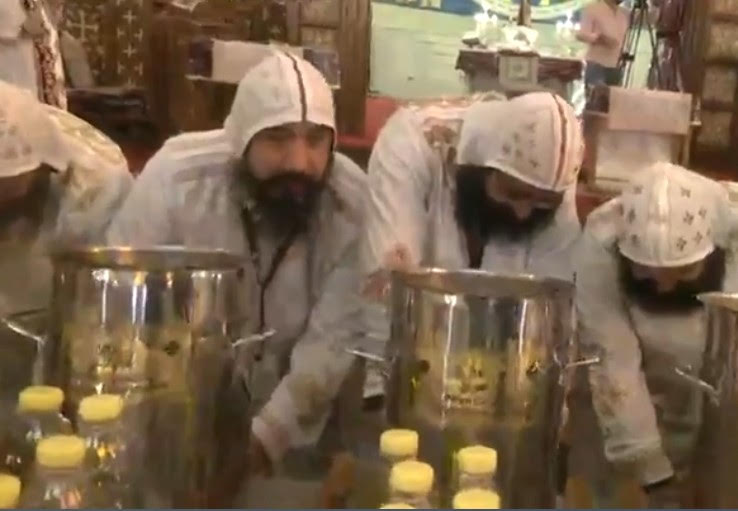