Pope stresses: Their voice should be voice of truth ... voice of Peace

The balmy Cairo evening of 3 December came not only with pleasantly warm weather, but also with an event that warmed the hearts of all who work in the Coptic press field. At the sparkling, newly opened administrative building of the Coptic Orthodox Church in the grounds of St Mark’s Cathedral in Abassiya, Cairo, a celebration was held under the auspices of Pope Tawadros II in honour of “Coptic press and periodicals…150 years of serving the Church and the Country”.

The event, the first to recognise and appreciate the Coptic press and its vital role with the Coptic and the general public, was the brainchild of Pope Tawadros. The Pope asked Anba Macarius, Bishop-General of Minya and Supervisor of the biweekly magazine al-Kiraza, the mouthpiece of the Coptic Orthodox Church, to organise a celebration to that effect, especially given that al-Kiraza is this year 2022 marking its golden jubilee. The celebration, according to Pope Tawadros, was to shed light on the emergence of the Coptic press some 150 years ago, the newspapers and periodicals that constitute the bulk of this press, and the Copts who founded, ran, or contributed to these publications. Pope Tawadros decided to honour five periodicals that are still thriving to this day: Risalat al-Kaneesa (The Church’s Message), al-Kiraza (The Proclamation), Madaress al-Ahad (Sunday Schools), and Magallat Morcos (St Mark’s Magazine), as well as the weekly newspaper Watani. 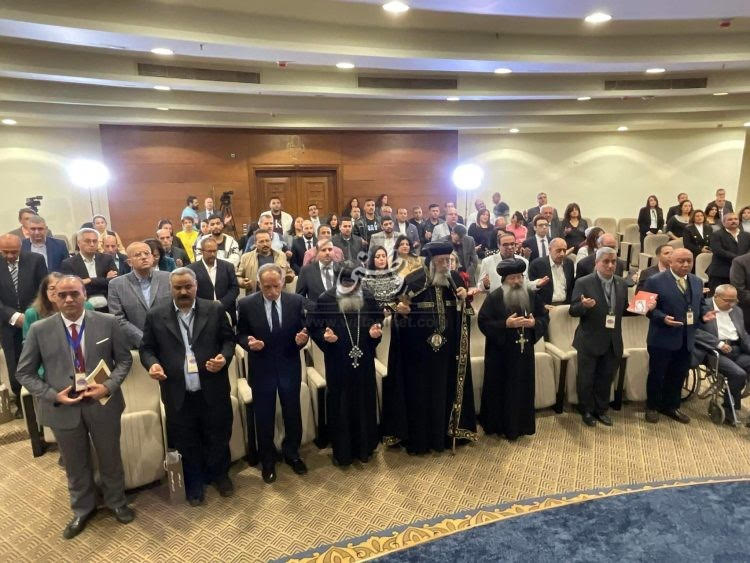 Attending the 3 December event was Bishop-General of Minya, Anba Macarius, and Bishop-General of the Churches of Sharq al-Sekkal-Hadeed, Anba Martyros; also a number of public figures and representatives of five publications honoured by the Pope.

Visitors arrived to find a genial Anba Macarius greeting them in the spacious reception hall at the ground floor of the building, where a photo exhibition was held of the most prominent issues of the five publications throughout the years. More recent issues were on display for anyone who would care to leaf through them, and a gift bag handed to each visitor included recent issues of these publications, a book on the history of Coptic periodicals and papers, and a book “The 118th Pope .. His Hands Drip With Abundance”, on the achievements of Pope Tawadros II, written by Fr Angaelos Mikhail Saad of the Church of St Mary and St Athanasius in Mississauga. 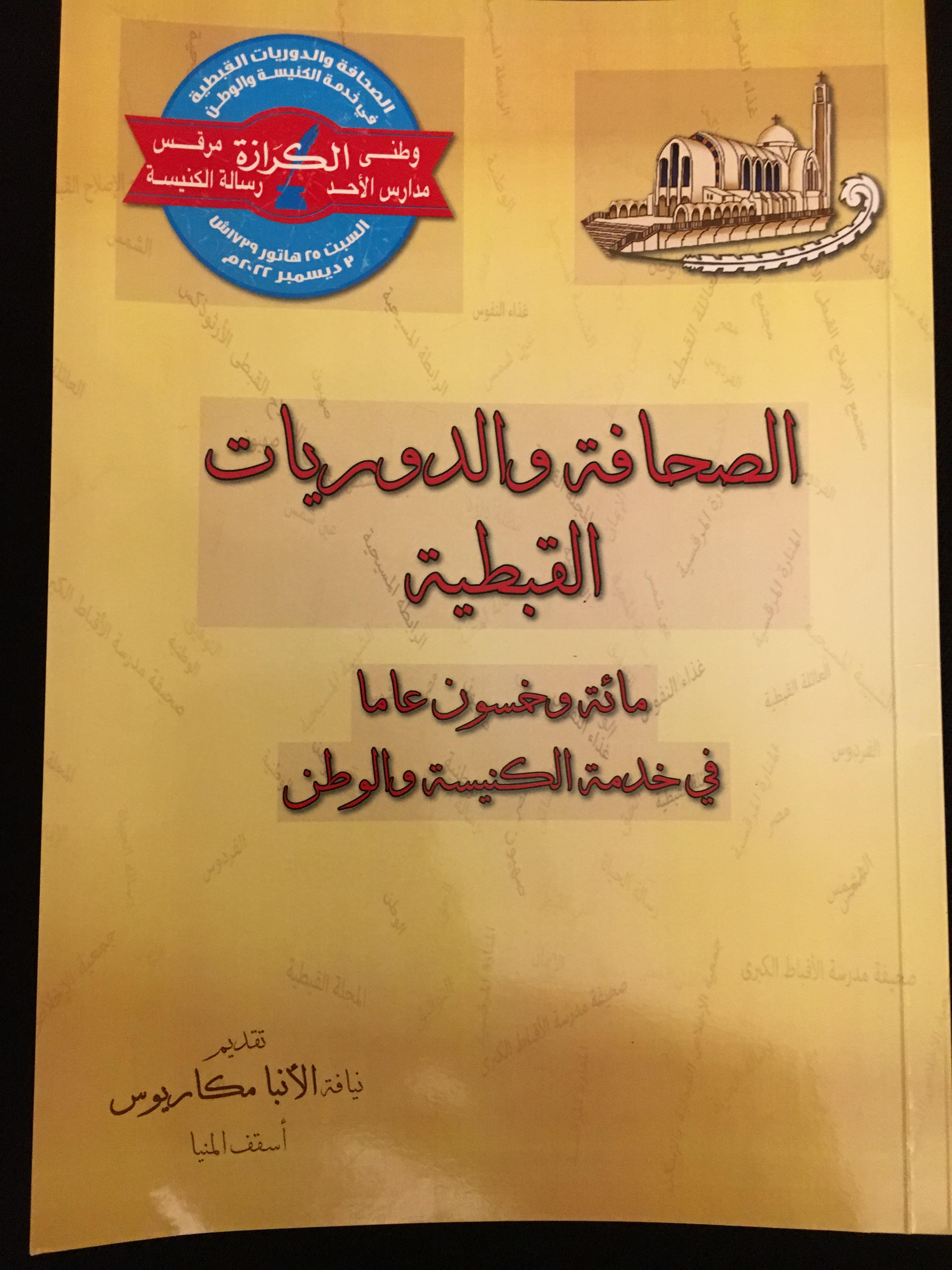 Upstairs, refreshments were being served, and guests were then escorted to their seats. Pope Tawadros arrived, together with Anba Martyros, and looked over the photo exhibition before heading upstairs where he was ushered into the auditorium to Coptic chants. He started with a prayer of Thanksgiving. 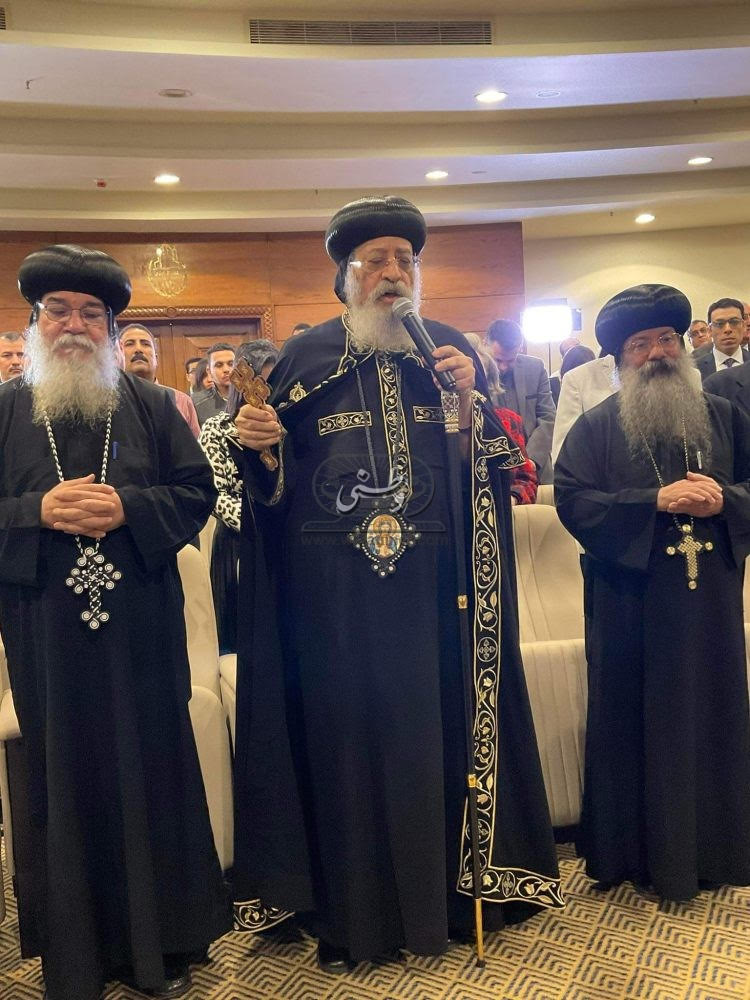 The audience were treated to a documentary that detailed the rich history of Coptic publications throughout the 150 years since the first was published. The documentary was meticulously done, and succeeded in capturing the attention of the audience as it listed a plethora of periodicals and papers many of which are no longer running but which nonetheless left a distinctive imprint.

Anba Macarius gave a word of welcome to all. He gave a brief review of the efforts that went into preparing the celebration and documenting the history of the Coptic press, expressing sincere thanks for all the team that undertook the arduous work. He proposed that everything concerning Coptic publications should be documented in print and electronically, calling for the formation of a centre dedicated to serve that role. 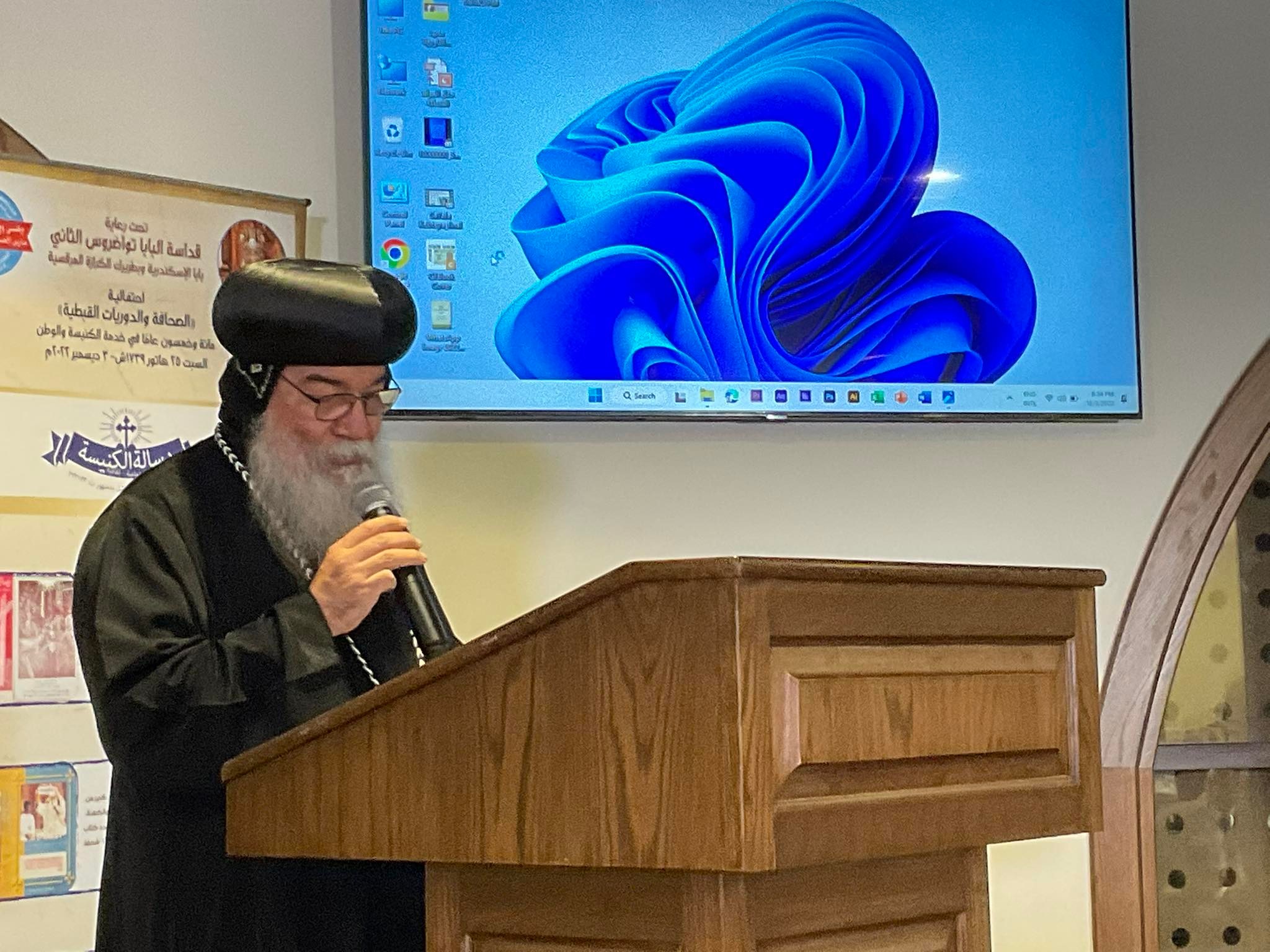 Anba Macarius suggested that regular meetings should be held to find ways to help finance publications that are floundering because of funding problems, rising costs, and decreasing readership of printed content; also to encourage publications to go online with their own e-versions. Notably, many of them are already online.

Anba Macarius concluded by thanking Pope Tawadros for his keen interest in and encouragement of Coptic publications, and for sponsoring the celebration in their honour.

It was then time for the head or representative of each of the publications honoured—in chronological order of the date of first issue—to give a brief word about their history and ambitions.

First was Madaress al-Ahad, founded in 1947 by Edward Benyamin (1913 – 1966) and issued monthly for 10 months a year by Bait Madaress al-Ahad (Sunday School House); its outlook is reformist, with a view to educating young persons on their Coptic doctrine and Church.

Next was Watani, a Sunday paper founded in 1958 by Antoun Sidhom (1915 – 1995), with a general Egyptian perspective that focuses on Coptic issues. 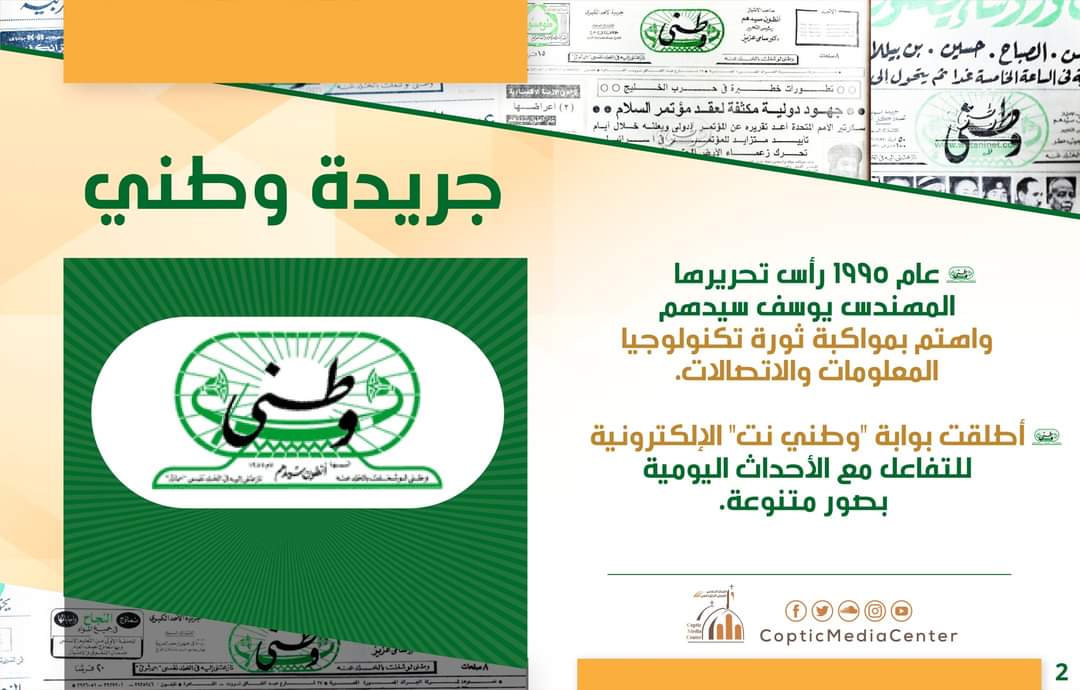 Magallat Marcos appeared in 1959; its licence holder and first chief editor was Waheeb Atallah (1919 – 2001) who in 1967 became Bishop for Higher Theological Studies, Coptic Culture, and Scientific Research in 1967. The monthly Magallat Marcos holds a spiritual, patristic, ecclesial and research focus. 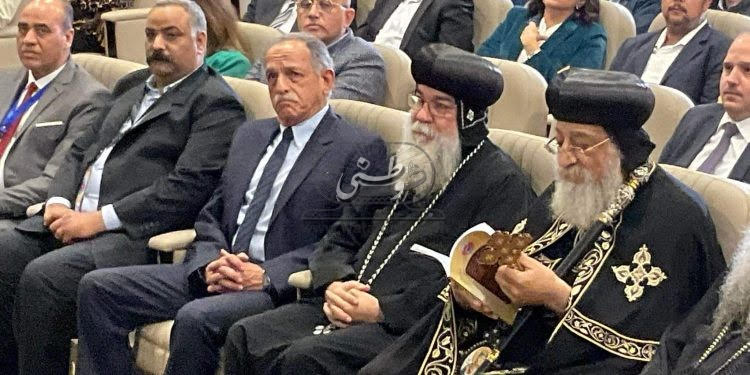 Risalat al-Kaneesa started in 1963 by Fr Mikhail Girgis of Damanhour’s church of St Michael. It is a quarterly magazine that targets all members of the congregation, especially the family, with all their varied life interests and spiritual needs. 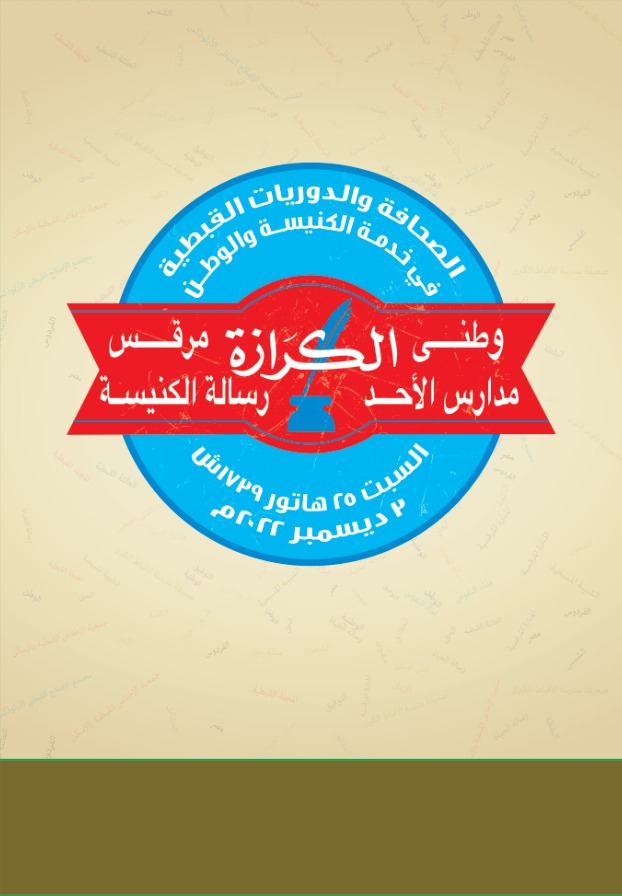 Al-Kiraza started in 1965 by the then Bishop of Education Anba Shenouda (1923 – 2012) who became Pope Shenouda in 1971, with a focus on Church news and issues, and spiritual articles. It was halted for a few years, then reissued in 1972 as the mouthpiece of the Coptic Orthodox Church.

Youssef Sidhom, Watani’s Editor-in-Chief, talked about Watani. He pointed out that the paper which enters its 65th year this December, is unique among current Coptic publications in that it is a general interest paper in the first place; it tackled political, economic, social, cultural, arts, sports issues and suchlike, in addition to its main concern which had long been lacking in the Egyptian press: Coptic and Church-related content, as well as Christian spiritual articles. The paper has a history of highlighting discrimination against Copts in Egypt, he said, and calling for their rights as the full Egyptians that they are. Yet it always sheds light on both the positive and negative issues on every front. 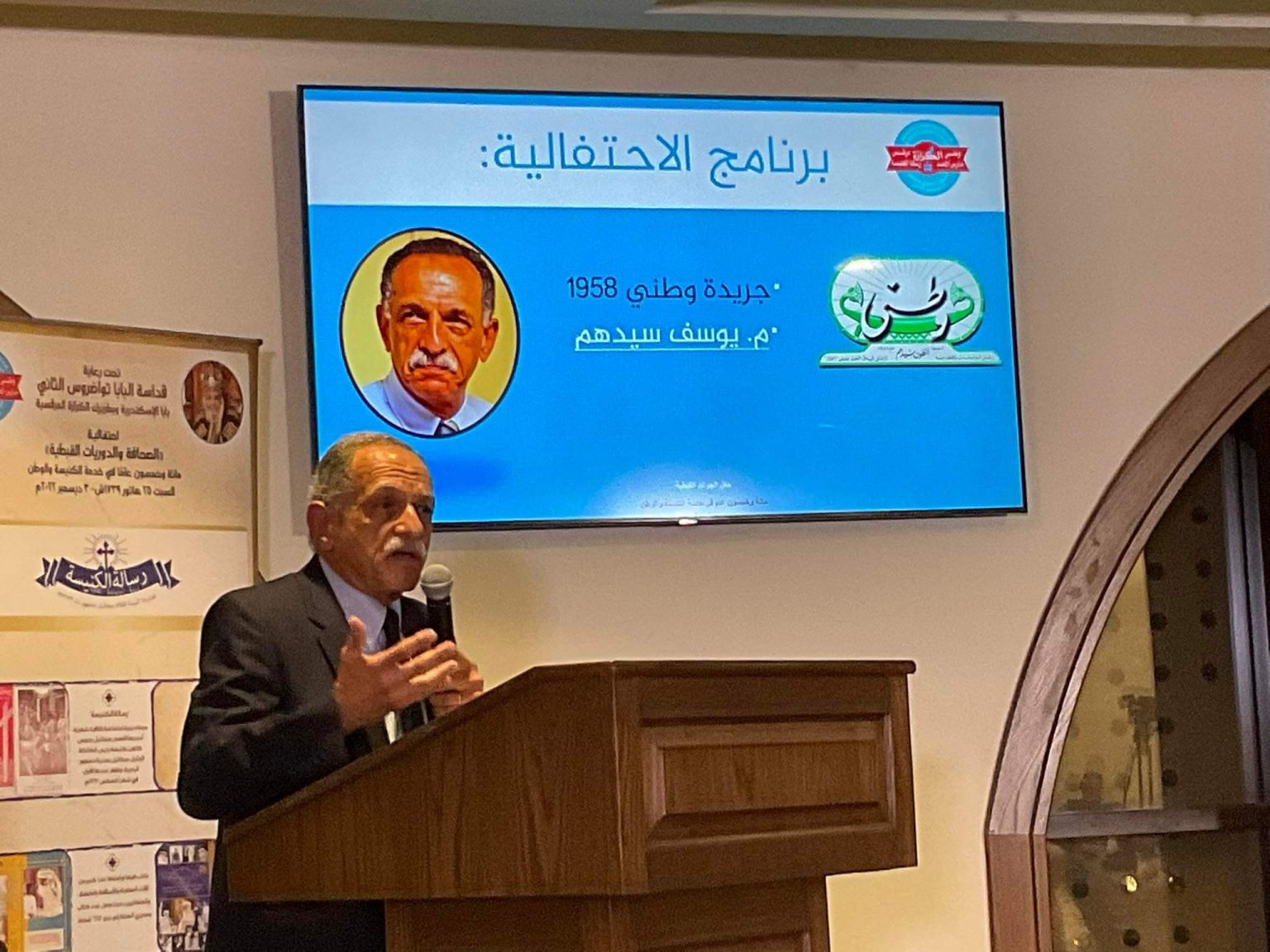 Mr Sidhom said that Watani’s doors have always been open to Christians and Muslims, also to men and women. He said the paper today features pages in Arabic, English, and French, and has been online since 2000 through its website wataninet. Watani steps into the future, he said with a new project spearheaded by the Blessed Egypt Foundation, to document the Trail of the [biblical] flight of the Holy Family in Egypt through a virtual reality website. He also announced the establishment of the Youssef Sidhom Foundation for Development to which Watani will hand over its charity sections that have been active since the 1980s.

Finally, Pope Tawadros gave his much-anticipated word. He began by stressing that, first and foremost, the mission of the media and the press should focus on highlighting the truth and striving for peacemaking. 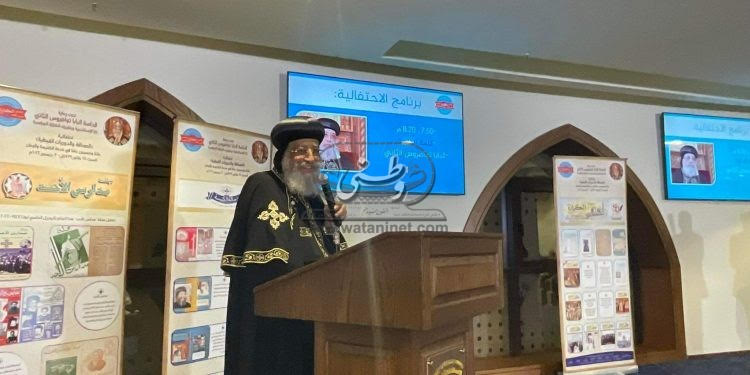 “This celebration,” he said, “highlights three objectives. One, it glorifies the name of God through the variety of numerous publications produced over 150 years by different publishers, and embracing diverse objectives.

“Two, it honours those who preceded us and who devotedly carried on their mission throughout 150 years.

“Three, it is an encouragement for those who carry on the torch despite all the modern-day hurdles and challenges. We ought to support them in every way.”

Commenting on a remark about Watani by one of the attendants, the Pope said: “Watani is doing a great job; I am personally keen on reading it every week; each page and every word. It is an all-encompassing paper that tackles all issues in our Egyptian society. I encourage it to carry on with its mission.”

The Pope concluded by declaring the 3rd of December every year a Day of the Coptic Press.