“If you don’t like it, go build yourself a church”

In the late 19th century, there were no churches in the town of Giza. Copts today may find this difficult to fathom, given that present-day Giza is a sprawling city on the West Bank of the Nile opposite Cairo which lies on the east bank. The two cities together form Greater Cairo, and are connected by 10 major bridges. As far as the Coptic Orthodox Church is concerned, Giza has grown into five dioceses.

Build a church of your own

But it was not always so. Until the 20th century, Giza was but a small town that harboured a small Coptic Orthodox parish which was part of the Diocese of Fayoum and Giza. It included no church. Copts living in Giza had to board a ferry to cross the Nile to Old Cairo where they could worship at one of the old churches there.

Salama Bey Agami, a prominent Coptic Gizan and a high-ranking government employee in Giza used to attend Sunday Mass at the church of Sett Berbara (St  Barbara’s) in Old Cairo, and had to cross the Nile back to go to work, since Sunday was a working day for government offices. On a Sunday when Mass took longer than usual and Mr Agami could see that he would be late for work if the priest continued at the same pace, he sent the priest a message with one of the deacons urging him to speed up the Mass ritual. Obviously, the priest did not like the message and told the deacon: “Tell him that if he’s not happy, he can build himself a church in Giza.”

Mr Agami did not feel offended; instead, he felt God was asking him to build a church in Giza. He went and sold a 70-feddan piece of land (1 feddan = 4,200 sq.m) that he owned, to use the money to build a church in Giza. In addition, he offered the land that formed the garden of his home to build upon what was to become the church of Mar-Marcos (St Mark’s), the first church in Giza. He obtained its building licence from Egypt’s then ruler Khedive Tawfik. So it was that the new church was built in the southern part of the city of Giza near the Nile bank.

The new church came under the jurisdiction of Anba Abraam, Bishop of Fayoum and Giza, a modern day saint famous for his spiritual stature and his love and unconditional support of the poor. Anba Abraam was born in 1829, consecrated in 1881 as Bishop till he passed away on 10 June 1914, and was canonised in 1964. 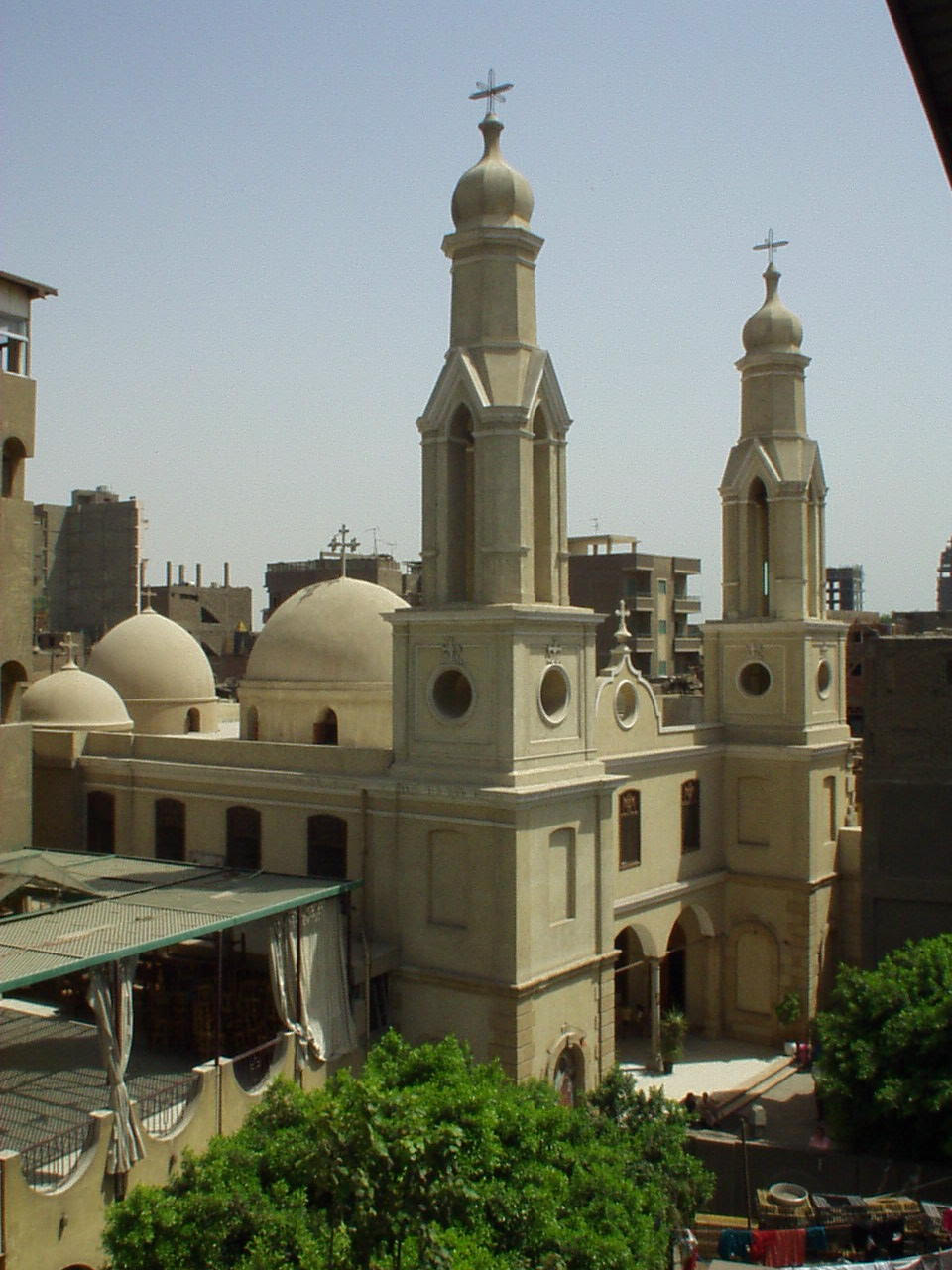 The Giza church was consecrated to Mar-Marcos. It was modelled after its namesake, the great Mar-Marcos church in Azbakiya, Cairo, which was the seat of Coptic patriarchs from 1800 to 1971. It boasts six marble pillars in the nave bearing the main dome, and two bell towers on the west side of the church. The iconostasis is made of beech wood intricately worked into Coptic motifs and inlaid with crosses of pure ivory; it holds icons of the angels and the apostles, and the patron saints of the church altars. The church has five altars: the main altar consecrated to St Mark; the northern altar for the Holy Virgin; the altar situated over the crypt of the fathers is consecrated to the Archangel Michael, and two other altars to al-Amir Tadros (St Theodore) and Mar-Mina. 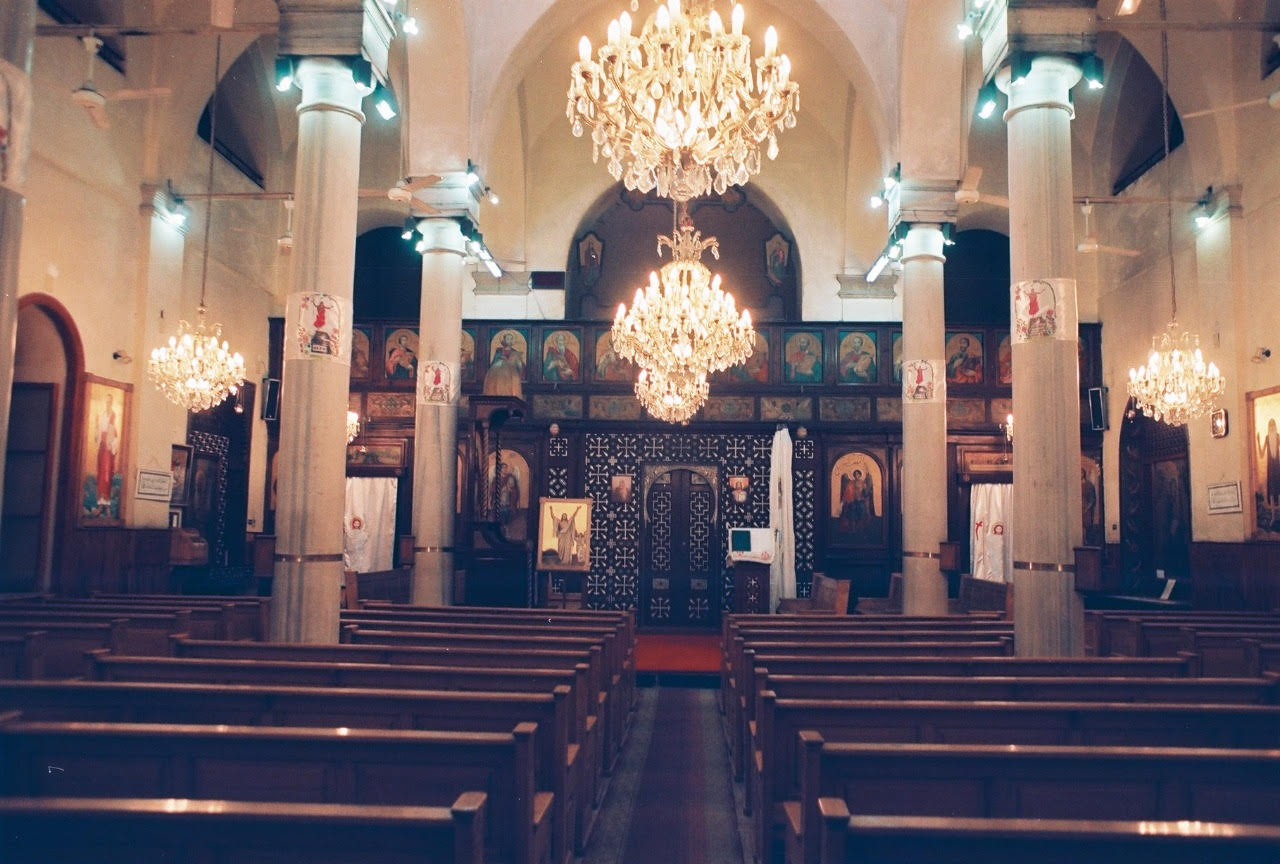 Mar-Marcos’s features a collection of unique icons that go back to the late 19th century, among them icons featuring the Pentecost, St Mark, the Holy Virgin and St John the Baptist. The church is also blessed to house relics of St Mark, St Theodore, and St John the Assyrian. And recently, relics of the Akhmim martyrs joined the collection.

Mar-Marcos’s is valued for being the source of all ecclesiastical services in Giza. It became the seat of the Bishop of Giza when Giza grew to be a diocese of its own in the mid-20th century, and remained so till the church of Mar-Girgis was built on Murad Street in Giza and became the seat of the bishop in the early 1960s.

Today, Mar-Marcos’s remains a beacon of Christian spirituality and service in the district. Despite crowding buildings, its two spires can be seen from the main road, proudly standing upright, reaching up to Heaven. Even though the church can now be reached only through a grid of small streets and alleys, its sudden appearance in a clearance in the road is beautiful and uplifting. Once inside the imposing gate, a spacious courtyard lined with trees leads to the porch of the church. Inside, the daylight, icons, bishop’s seat, wooden pews, chandeliers, and old-time atmosphere work to radiate a deep sense of peace. 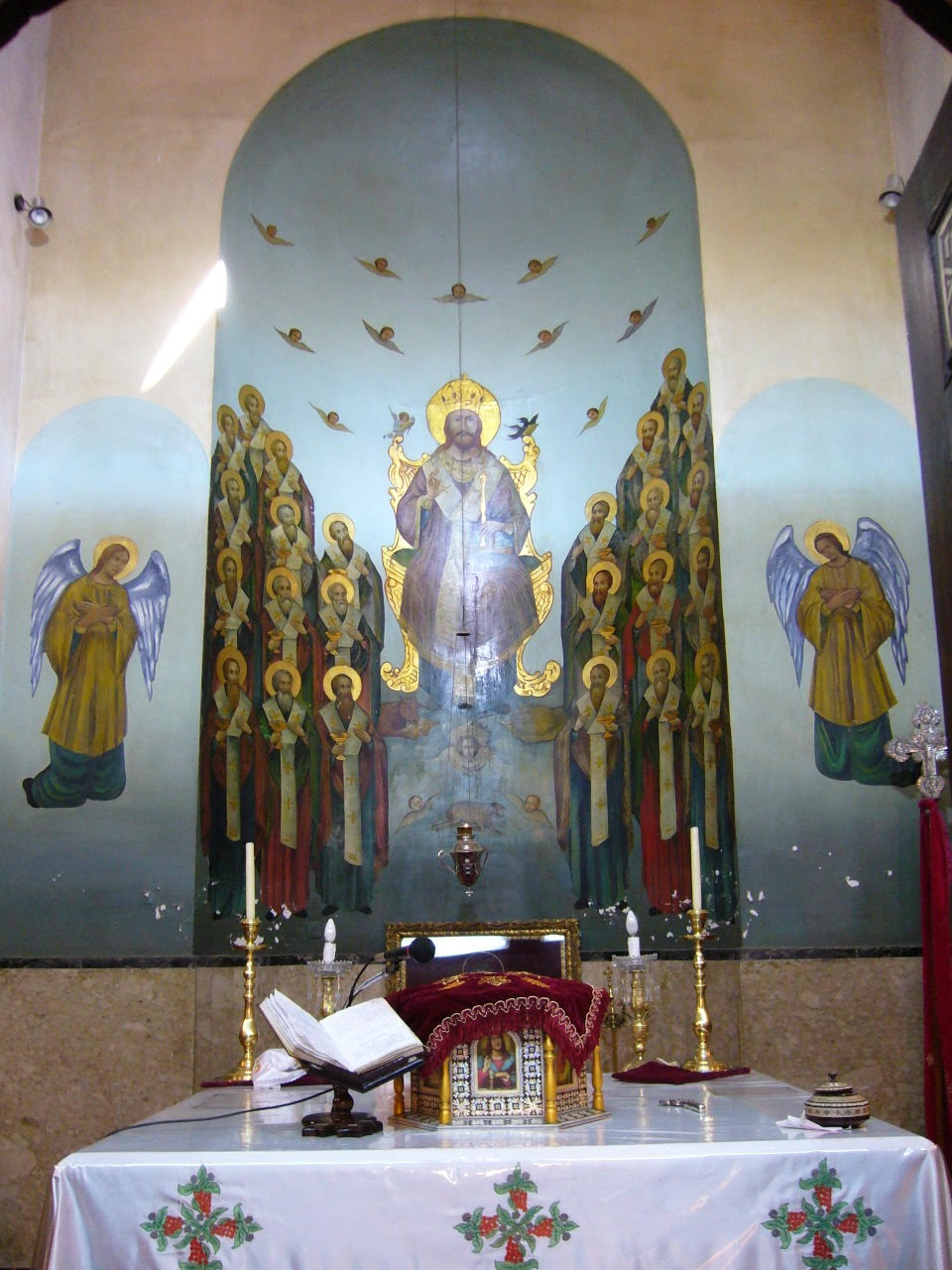 Mar-Marcos’s has over the years been served by great priests that left their mark on the church and its congregation, among them Fr Salib Sourial who was ordained in 1948 and passed away in 1994

and Fr Luca Eldowery, priest from 1976 till his death in 2001. Both were among the pioneers of ministry in Giza. Their bodies are buried in the crypt of the church, together with those of Fr Bassilios and his son Fr Ibrahim Bassilios who served in the church in 1910 – 1950. Today, five priests carry on the tradition: Fr Marcos George, Fr Benyamin Morgan, Fr Matta Mahrous, Father You’eel Mekhlef, and Fr Mercurius Ishaq.

The church boasts a thriving ministry for the elderly. Church servants pay them regular home visits to attend to their needs and, before coronavirus restrictions, used to bring them to church every Saturday for Mass and subsequent refreshments. Now a new building is being constructed on land adjacent to the church to house a home for the elderly. 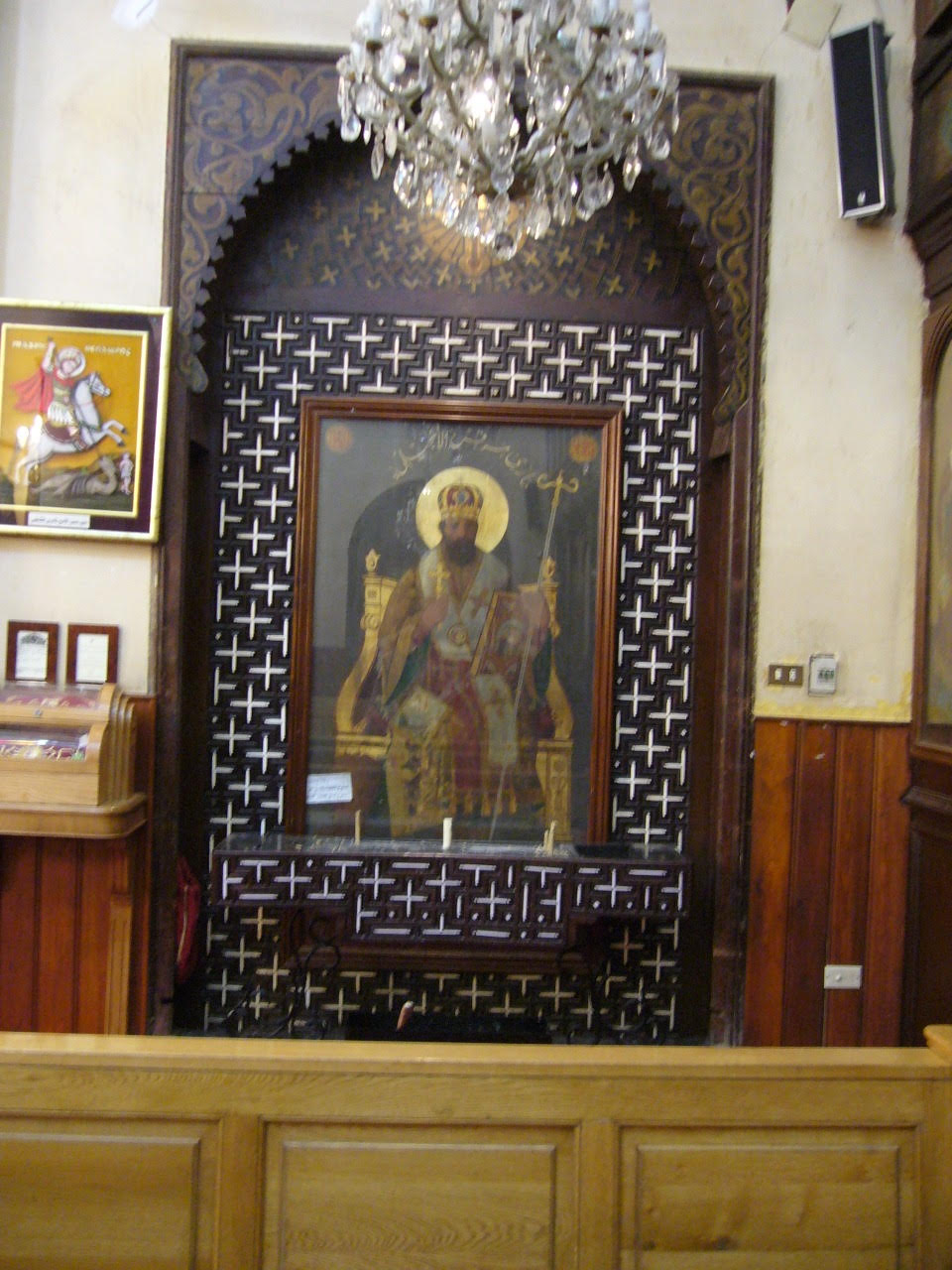 The land where the house of Salama Bey Agami once stood is now the site of a community service centre affiliated to the church. The centre includes meeting halls, as well as halls for wedding receptions and condolences. In 1987, the church built a student hostel Beit al-Ragaa’ (House of Hope) adjacent to the church building itself, to host students coming to study in Giza or Cairo.

Mar-Marcos’s has always been a source of spiritual inspiration for the congregation; many incidents and stories connected to it have been recounted over the years. According to Fr Salib Sourial, one night Fr Ibrahim Bassilios was summoned after people saw the church lights on, and heard sounds of Mass being sung inside. When Father Bassilios opened the church the sounds had gone but the lights were on, and it looked like Mass had just concluded, because there was a strong smell of incense and water was sprinkled on the altar. The only explanation according to Coptic tradition was that the saints and angels had been there celebrating Mass.

Another story goes that during the fast of the Holy Virgin in August, while the icon of the Holy Virgin was being carried in a procession in the church to songs of praise and chiming of the church bells, a furious Muslim neighbour came into the church complaining of the sound of the bells and explaining he was sick and the noise upset him. On the following day, however, he came back to the church, this time to apologise. He explained that after he left the previous evening, a beautiful lady appeared to him in luminous form; she told him she was the Virgin Mary and that he had upset her children. He apologised to her and told her about his illness; he said she reached her hand out to him and healed him.

This year, Mar-Marcos’s in Giza celebrates 137 years on opening for worship. Watani wishes it many more years of thriving spirituality and service in an extended, blessed presence among the congregation of Giza.