It was the first time ever that the venerable Bibliothèque nationale de France (BnF), the National Library of France, allows a Copt who is moreover not among its staff to catalogue one of its manuscript collections. The Copt was Nabil Farouk Awad, Curator of the library of the Egyptian Société d’Archéologie Copte (SAC), and the collection he catalogued was the BnF’s Coptic manuscripts in the Bohairic dialect. Bohairic Coptic was used by Egyptians in the Delta region until it was replaced by Arabic since the 13th century, and is still used today by the Coptic Church.

“It all started in the summer of 2018 when I approached Wassef Boutros-Gahli, President of the SAC, with my idea of cataloguing the BnF’s collection of Coptic manuscripts,” Mr Awad told Watani. 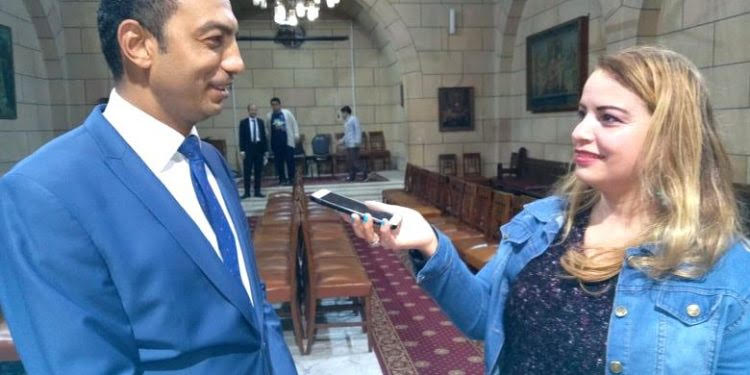 The Société d’Archéologie Copte is an Egyptian non-governmental association that has attained international stature in the field of Coptic studies. It was founded in 1934 by a group of Copts, led by members of the prominent Coptic Boutros-Ghali family, with the purpose of conducting, enhancing, and publishing Coptic Studies. Ever since it was established, it filled an important void in the scholarly arena of Coptology. It issues an annual publication Bulletin de la Société d’Archéologie Copte that is renowned in international scholarly Coptic circles, and has moreover played  an important role in the foundation of the International Association for Coptic Studies in 1976. 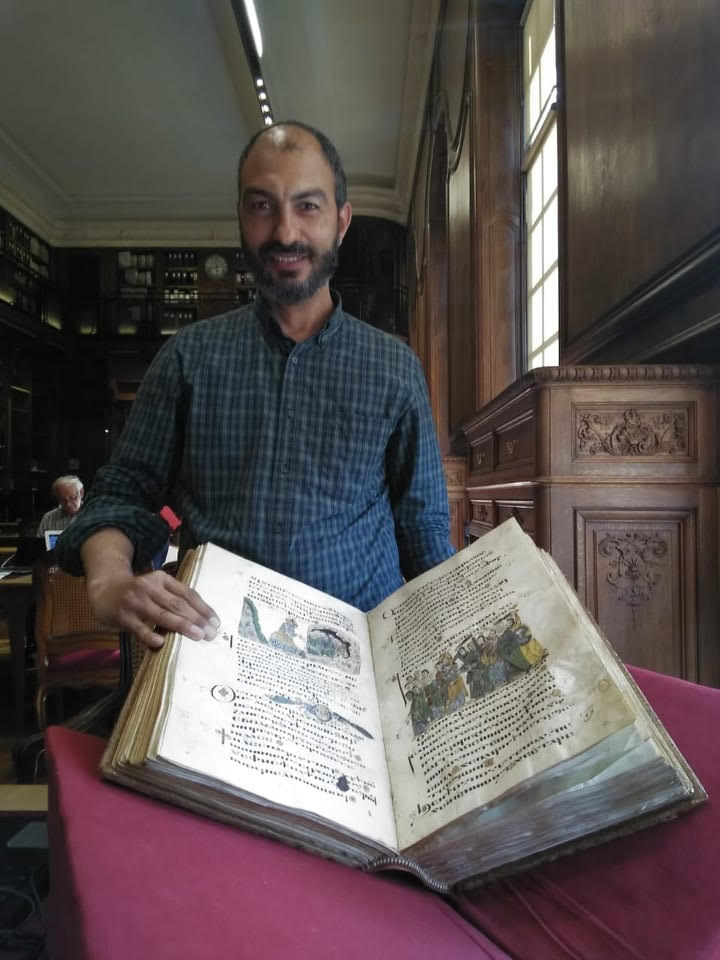 Once Mr Awad approached Wassef Boutros-Ghali with the idea of a proposal to the BnF  to catalogue their Coptic manuscript collection, “he encouraged me to present it to the manuscripts’ section of BnF during my upcoming trip to Paris”, Mr Awad said, “and gave me a letter of recommendation to Isabelle le Masne de Chermont, Director of BnF’s Manuscripts Department.”

“When I arrived at Paris,” Mr Awad recalled, “Ms De Chermont was on holiday, so I met instead Professors Laurent Hericher Chief of the Oriental Manuscripts Department and Marie-Geneviève Guesdon of the Arab Manuscripts Department. I explained to them my idea of creating an index of the Coptic manuscripts owned by BnF and compiling a catalogue which, I explained, the SAC was willing to print in English or French.” Mr Awad, moreover, told them he was a deacon in the Coptic Church, and had extensive first-hand knowledge and background of Coptic texts and liturgy. Following discussions on a number of details, they accepted on behalf of BnF his collaboration proposal. They expressed a wish that BnF would contribute to printing the catalogue, and that the names of both BnF and SAC would feature on it. 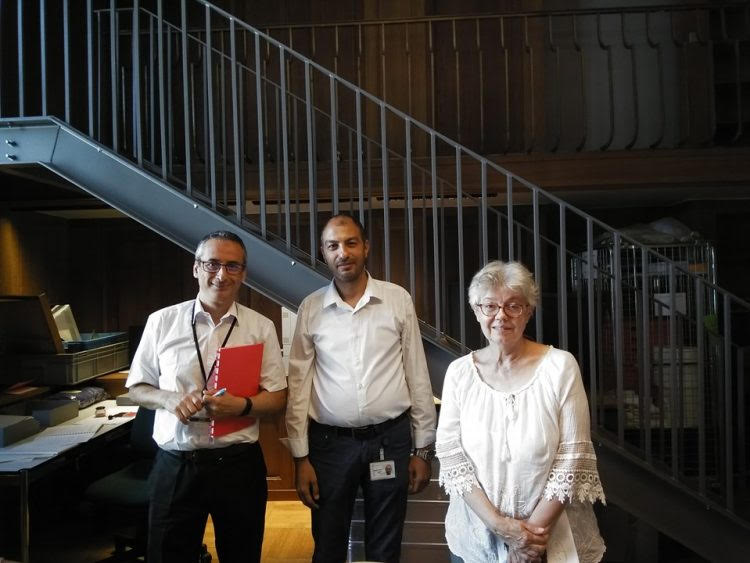 “I have now completed the first phase of my task,” Mr Awad said. “I had a meeting with the BnF team who throughly scrutinised the work, piling praise on it. Professor Guesdon said that the indexing I did matched international standards, stressing that it was among the most accurate and comprehensive manuscript indexes. At the end of our meeting, Dr Khaled Shaqqour al-Elmi, Chief of the department of Persian and Arabic Manuscripts told me that after I finish my mission I would be asked to give lectures in Paris, and that BnF would seek my expertise on Coptic manuscripts. This made me very happy, but the amazing surprise was when I was told that once the project was complete the entire range of BnF’s Coptic manuscripts would be available online, together with the detailed index I prepared for each, along with high resolution pictures. I was told that the name of SAC and my own would also figure on the manuscript images.” 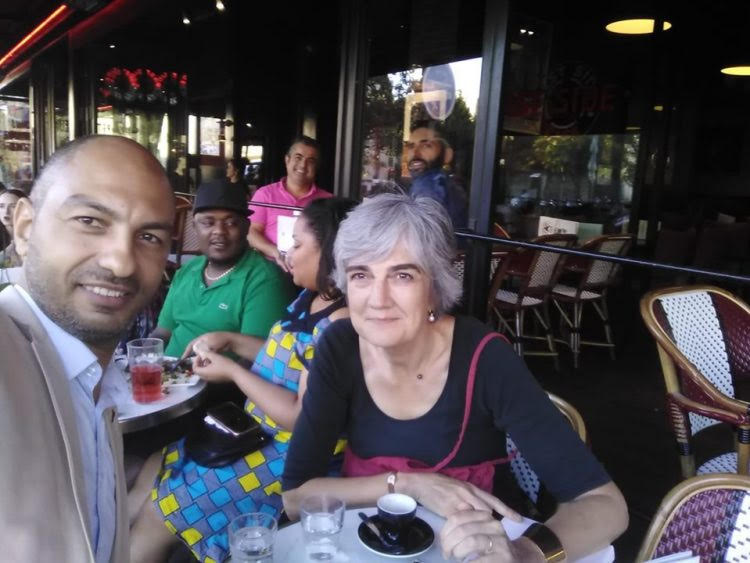 Mr Awad said that, in a later meeting with Ms De Chermont, she highly praised his work and gave him the green light to publish some of the rare Coptic manuscripts he had discovered within the BnF collection.

Watani asked Mr Awad about cataloguing Coptic manuscripts in Egypt. “There has been individual attempts at that,” he said. “The first who broached this field was Marcos Pasha Simiaika who with the help of Yassa Abdel Messih, a former librarian at the Coptic Museum, worked on a preliminary catalogue of the Museum’s Coptic manuscript collection.” 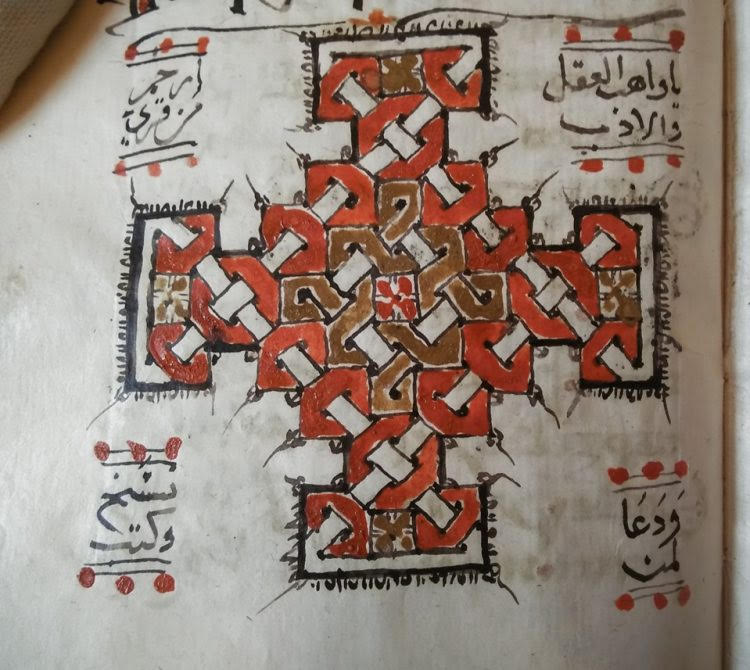 Mr Awad also mentioned Ishaq al-Bagoushi who had worked in that field, and said that there were indexes of manuscripts in churches or monasteries that took years of work to complete. “In Egypt,” he said, “we lack organised academic work in the field of Coptic manuscripts. We need to establish an international system of accurate academic indexing.”

Mr Awad, a researcher who has been with SAC since October 2011, was recently received by Pope Tawadros. They talked about his cataloguing project with BnF which, Mr Awad explained, owns a huge collection of Coptic and Arabic Christian manuscripts. The Pope expressed his appreciation of the cataloguing project, and said he hoped to the catalogue would see light soon enough. 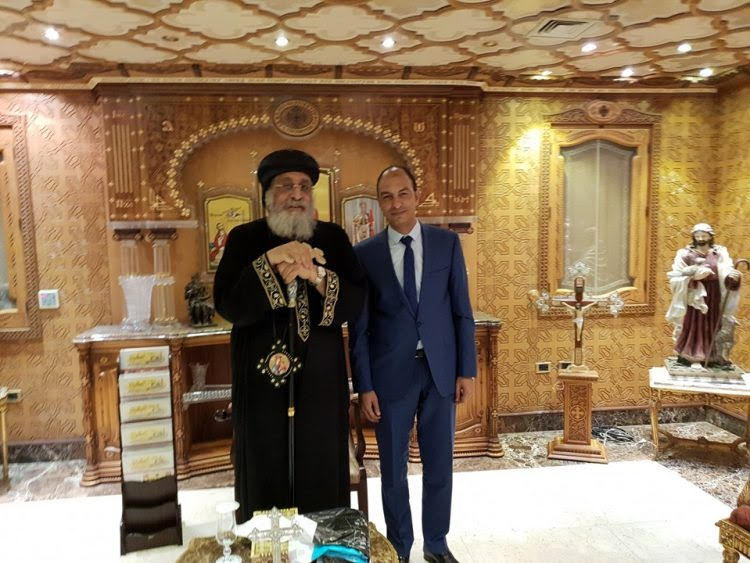 The BnF was founded in 1461 by King Louis XI who ruled France from 1461 to 1483, and includes many libraries which previously or later on belonged to French royalty. The private library of King Charles V who ruled France from 1364 to 1380, and which he established in 1368 included 917 manuscripts. In 1537, a royal decree required all publishers to deposit a copy of any book they publish in the BnF.

In 1622 the BnF was divided into two sections: one for manuscripts and the other for books, and two indexes were published. After the French Revolution, the library which was founded as the royal library was baptised the Bibliothèque nationale de France. During WWI its wealth rose to 5 million publications and, during WWII, all its belongings were moved to the countryside to preserve them from the war destruction. 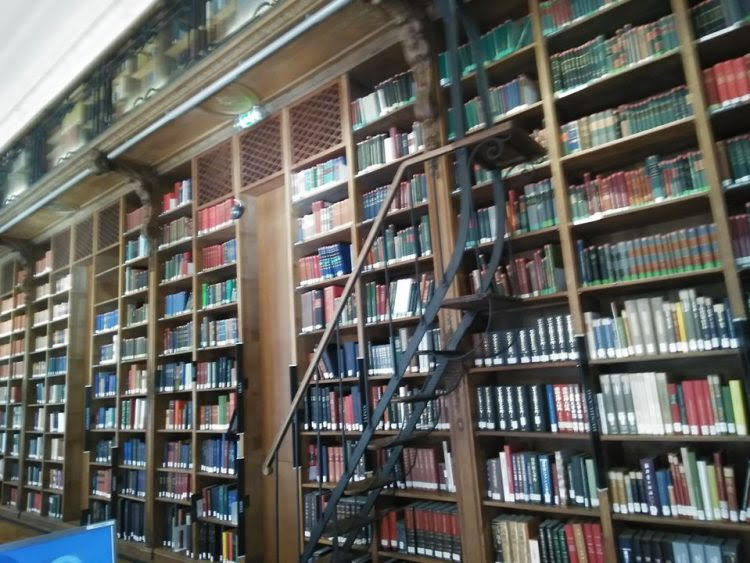 During the time of President François Mitterrand a new headquarters was constructed for BnF. Today BnF is home to 14 million books and publications, 250,000 manuscripts, 360 periodic publications, 800,000 maps, 2 million pieces of music, 1 million audios, tens of thousands of video recordings, pictures and multi medias, and 530,000 coins and medals.

According to Mr Awad, BnF includes a huge wealth of Coptic and Arabic manuscripts which reached France many centuries ago through French merchants, travellers and diplomats who were delegated to the region. BnF owns now 7270 Arabic manuscripts, some 45,000 books and 3,000 periodicals. Among the most important manuscripts is one for saints’ biographies, and the other is the book of law written by Anba Mikhail, Archbishop of Damietta during the 12th century to which he gave the name of Kamel al-Qawaneen (All the Laws). The BnF, according to Mr Awad, includes between 180 and 200 Coptic manuscripts written in the Bohairic dialect, this besides a huge number of leaflets written in Saidi and Bohairic of sermons by St Shenouda the Archimandrite in the White Monastery. The library also includes part of the manuscript library of the White Monastery. 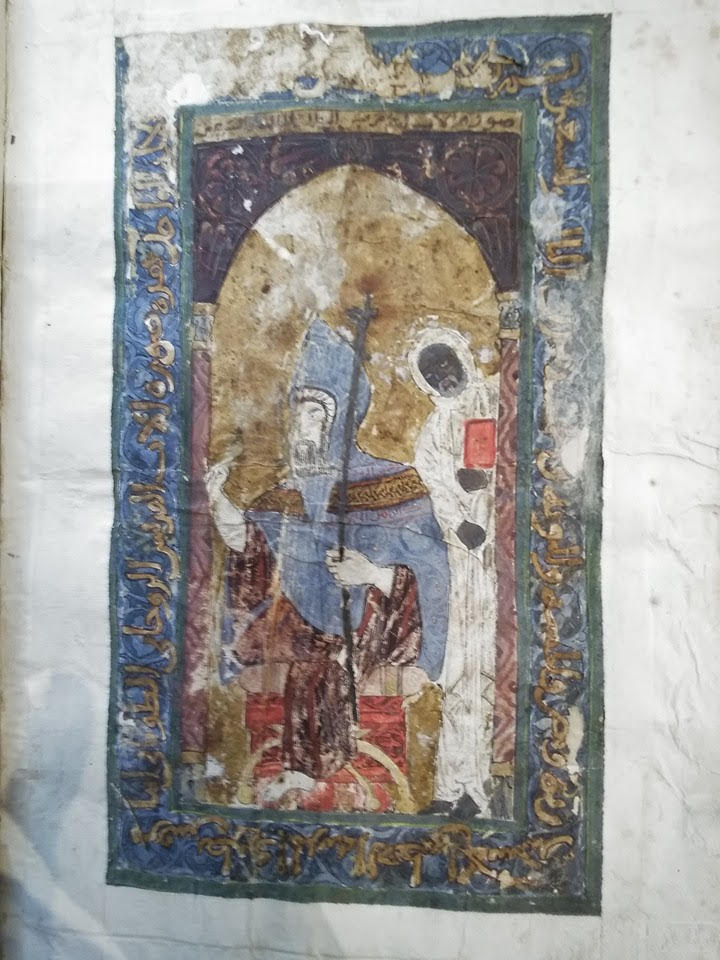 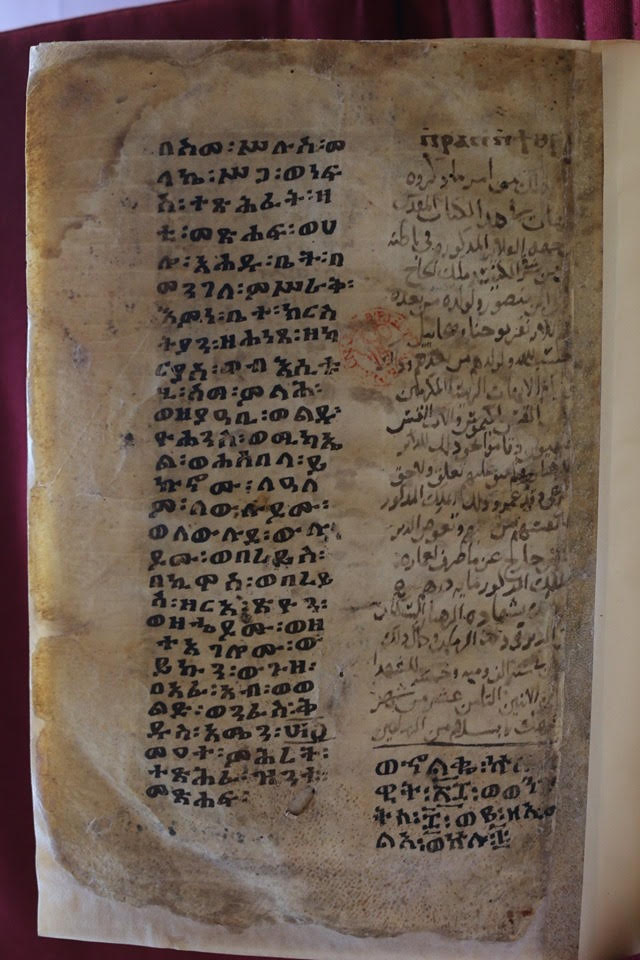 Among the manuscripts that especially impressed Mr Awad was Manuscript Thirteen Copt of the four gospels, and the readings’ index written by Anba Mikhail and published in 1179. “I saw the manuscript which was kept in BnF’s private safe; it was the first time for this manuscript to be taken out of the safe,” he proudly said. The incidents of the Bible are drawn on parchment using gold water. It weighs 7.137 Kg. Manuscript Four Copt is as old as Thirteen Copt, and depicts the Book of Psalms and Hymns of the prophets drawn on parchment too. Manuscript Seven Copt dates back to the 14th century and depicts the Book of Pascha. “These are examples of the rare and impressive manuscripts housed in the BnF and which I have had the privilege to work on cataloguing,” he said.