Today, 23 April, Western Churches mark the feast of St George; the Coptic Church celebrates it on 1 May. To commemorate the great saint, Watani introduces an outstanding biography of him, an encyclopaedic work that took years of meticulous research by the nuns of the Convent of Mar-Girgis in Old Cairo to complete. Mar-Girgis al-Romani, Diraassa Mawsouiya wa Tareekhiya fi Seeratihi (St George the Roman: an Encyclopaedic, Historical Study of His Biography was published by Mar-Girgis Convent in Cairo in November 2019, and carries an introduction by Pope Tawadros II. 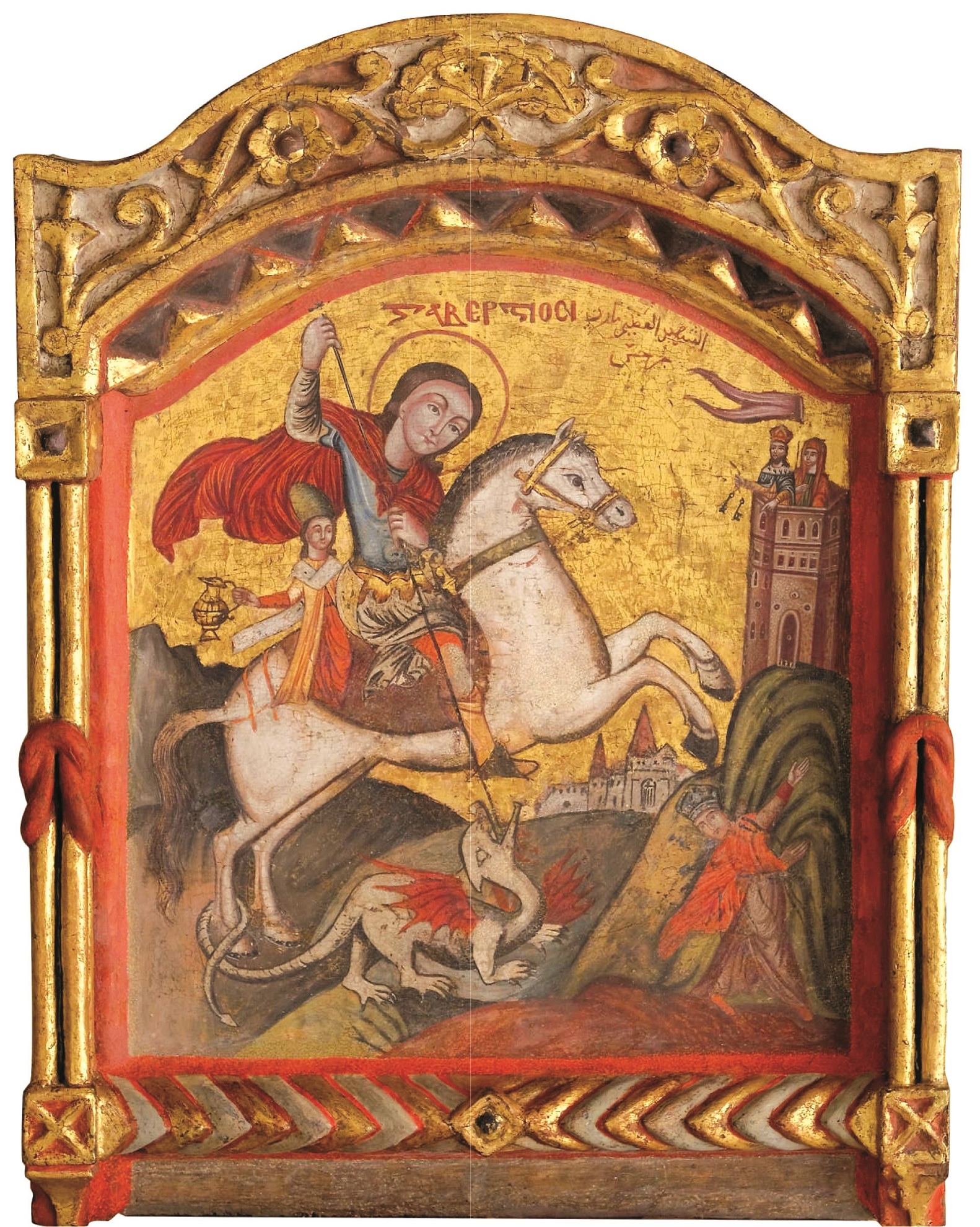 Hardly anyone in the Christian world is ignorant of who St George is. Western Churches mark his feast day on 23 April, whereas the Coptic Church celebrates his martyrdom on 1 May, and the consecration of the first church in his name on 16 November. For Egyptians, St George is Mar-Girgis al-Romani, literally St George the Roman, the “Prince of Martyrs”, one of the most powerful patron saints termed in folk culture “The Quick-to-Respond”; one just has to call his name for him to come to the rescue.

“Not much is known”

Even though stories of St George abound to the point that it is thought everything about him is common knowledge, nothing can be farther from the truth. Historic references are unanimous that “not much is known about St George”, or that “what is known about him is uncertain”.

Well known stories of the Saint, among them the one cited in the Coptic Synaxarium, go along a number of common lines. They say that St George was born around 280AD in Cappadocia, Asia Minor. When he was 17, his father was martyred for being a Christian, but St George grew up in the faith and love of God. He joined the Roman army and gained a reputation for courage and triumphs. When 20, his mother died. From then on, he renounced the pleasures of this world, distributing his possessions among the poor, and setting his slaves and maidservants free. 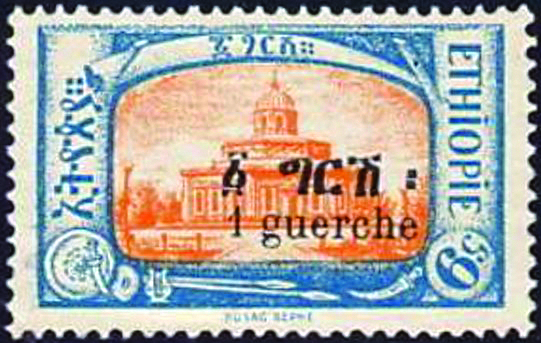 The Roman Emperor Diocletian—a few sources cite the Emperor as one named Dadianus—issued an edict to destroy churches in the Roman Empire, burn all Christian books, dismiss Christians from jobs, confiscate their possessions and enslave them if they do not offer sacrifices and burn incense to the Roman gods.

St George was at Alexandria at the time when he saw the edict. He read it and tore it up, so was arrested and taken to Cappadocia, then to Emperor Diocletian for punishment. There, St George confessed his true Christian faith. For this he was sent to prison where the Emperor tried to tempt him into renouncing his faith; when no temptation worked, St George was put through some seven years of horrendous torture.

Finally, in 303, St George was beheaded. Some sources say he was beheaded near Lydda in Palestine, others say it was outside the walls of Nicodemia, a significant administrative centre of the Roman Empire in northwest Asia Minor.

A Christian took the body, wrapped it in an expensive shroud, and took it to Lydda where a great church was later built in his name.

With so much uncertainty to the story of St George, and a huge literature of unauthenticated miracles attributed to him—-including his famous killing of the dragon, which came to identify his icon—it is no wonder that historians have generally ruled him out as mere myth or legend. 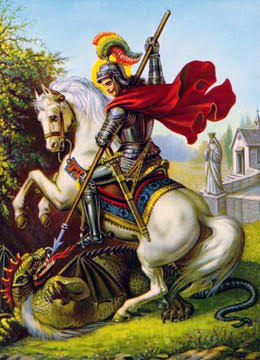 Not so, according to countless Christians, among them the nuns of the convent consecrated to him, the Convent of Mar-Girgis in Old Cairo.

In an attempt to dispel the doubts over the authenticity of the story of St George, the Mar-Girgis nuns set about an arduous, in-depth research that took them decades to complete, meticulously verifying facts by historical evidence and manuscripts. The research was begun by Sister Ilariya in 1993 when the convent was under the supervision of Mother Yu’anna (Mother Superior from 1980 till she passed away in 2000) and the current Mother Superior, Mother Thekla. Sister Ilariya spent 15 years on her research, till she died and the work passed over to other nuns. Among them was Sister Anna Simone who died aged 34 on 31 May 2019.

The effort culminated in the book Mar-Girgis al-Romani, Diraassa Mawsouiya wa Tareekhiya fi Seeratihi (St George the Roman: an Encyclopaedic, Historical Study of His Biography, issued in November 2019 by the Convent of Mar-Girgis in Old Cairo. 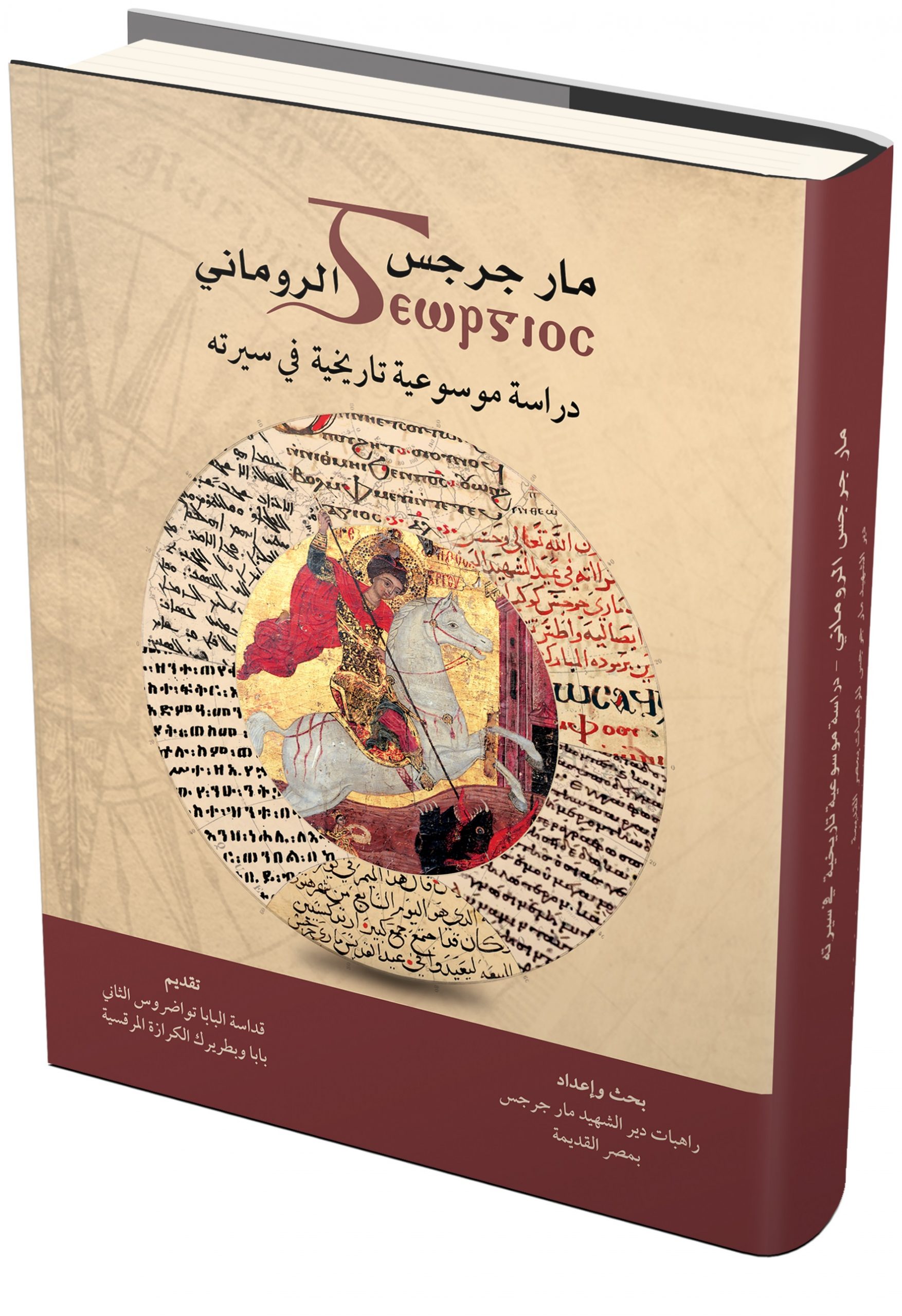 “It is the greatest research in the history of the Saint’s biography,” was how Pope Tawadros II described the book, praising the faithful efforts exerted by the Mar-Girgis nuns. “The wealth of manuscripts and references used to authenticate its content give the book huge historical significance.”

The great effort started with collecting old, manuscripts relevant to the biography of St George. The manuscripts collected originated from diverse sources; they were 96 in number and came in five languages: Greek, Syriac, Ethiopian, Coptic in both the Upper Egyptian and Bahri (northern) dialects, and Arabic. They dated back to different eras; the oldest goes back to the 6th century and the most recent to the 20th century. Some came from Coptic churches, monasteries and convents in Egypt, also from the Coptic Museum in Cairo; the Franciscan Centre of Christian Oriental Studies in Old Cairo; as well as international libraries such as the Vatican Library; the British Museum; St Joseph University in Beirut; and others. 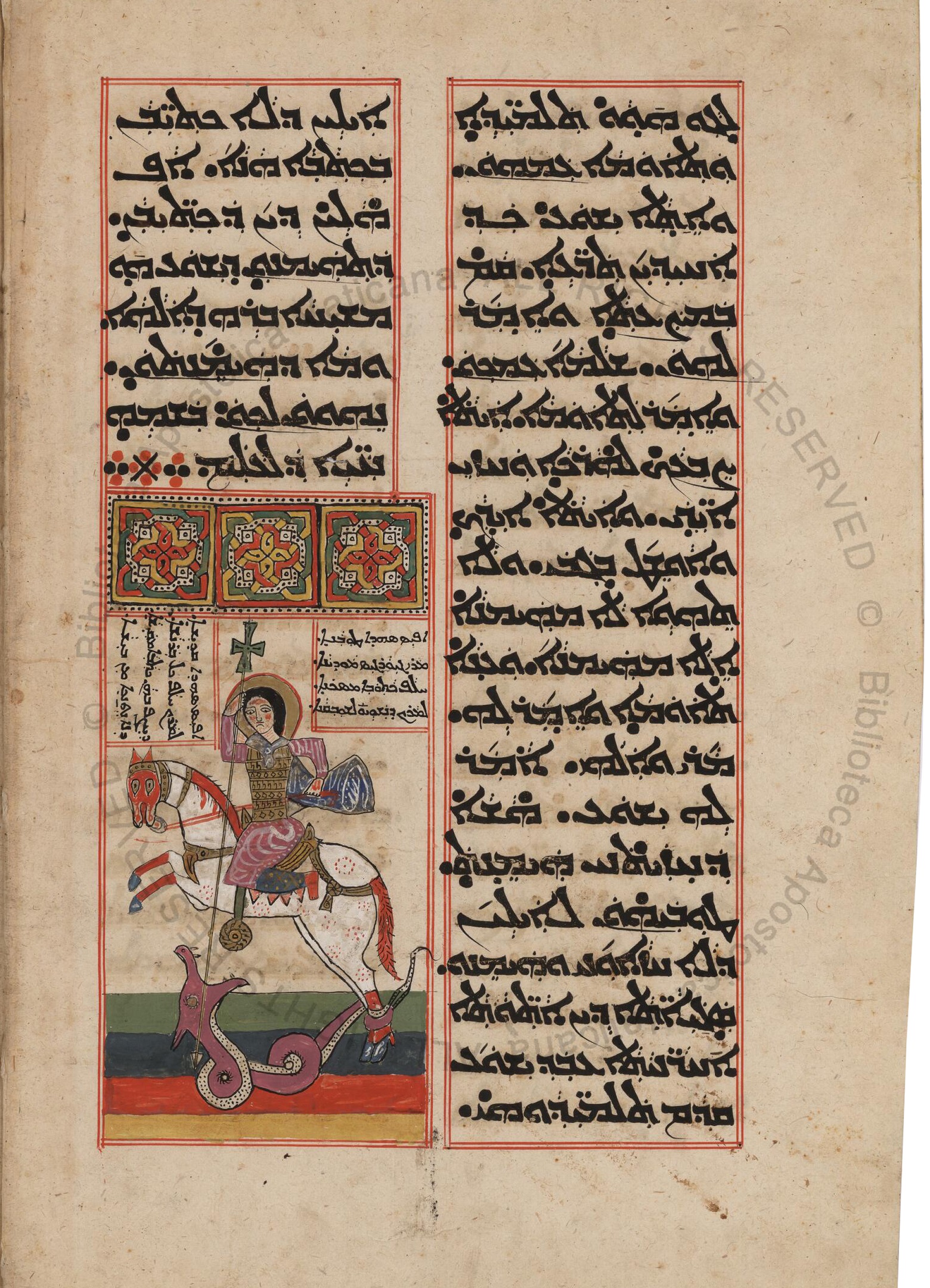 The nuns sought to translate the manuscripts they compiled, asking the help of experts. Throughout their research, they reviewed and checked the manuscripts and their content to prove historical authenticity. Among the manuscripts studied was a very long one, no. 742 from the Coptic Museum, which they used upon permission from the Egyptian Ministry of Antiquities. They performed the arduous task of verifying and indexing it.

The nuns took care to add to the Mar-Girgis book an appendix of comparison tables between relevant texts in the various manuscripts.

One definite finding: the main lines of the biography of St George have remained unchanged throughout 14 centuries.

The 12-chapter Mar-Girgis book cites Palestine as the place where St George was born and reared, but that his father was Cappadocian. He had two sisters: Cassia and Madronah. Hitherto unknown details of the Saint’s childhood and youth are revealed in the book.

Among the significant facts and dates uncovered by the nuns’ research and published in the Mar-Girgis book is that St George was tortured and martyred by order of Dadianus, a Roman-born king of Persia who persecuted Christians in 258 – 268AD. In 261 St George, who was then 21, declared his Christian faith for which he was brutally tortured for seven years by Dadianus, till he was beheaded in 268. Coincidentally, that date was the king’s birthday and also his last day on the throne. 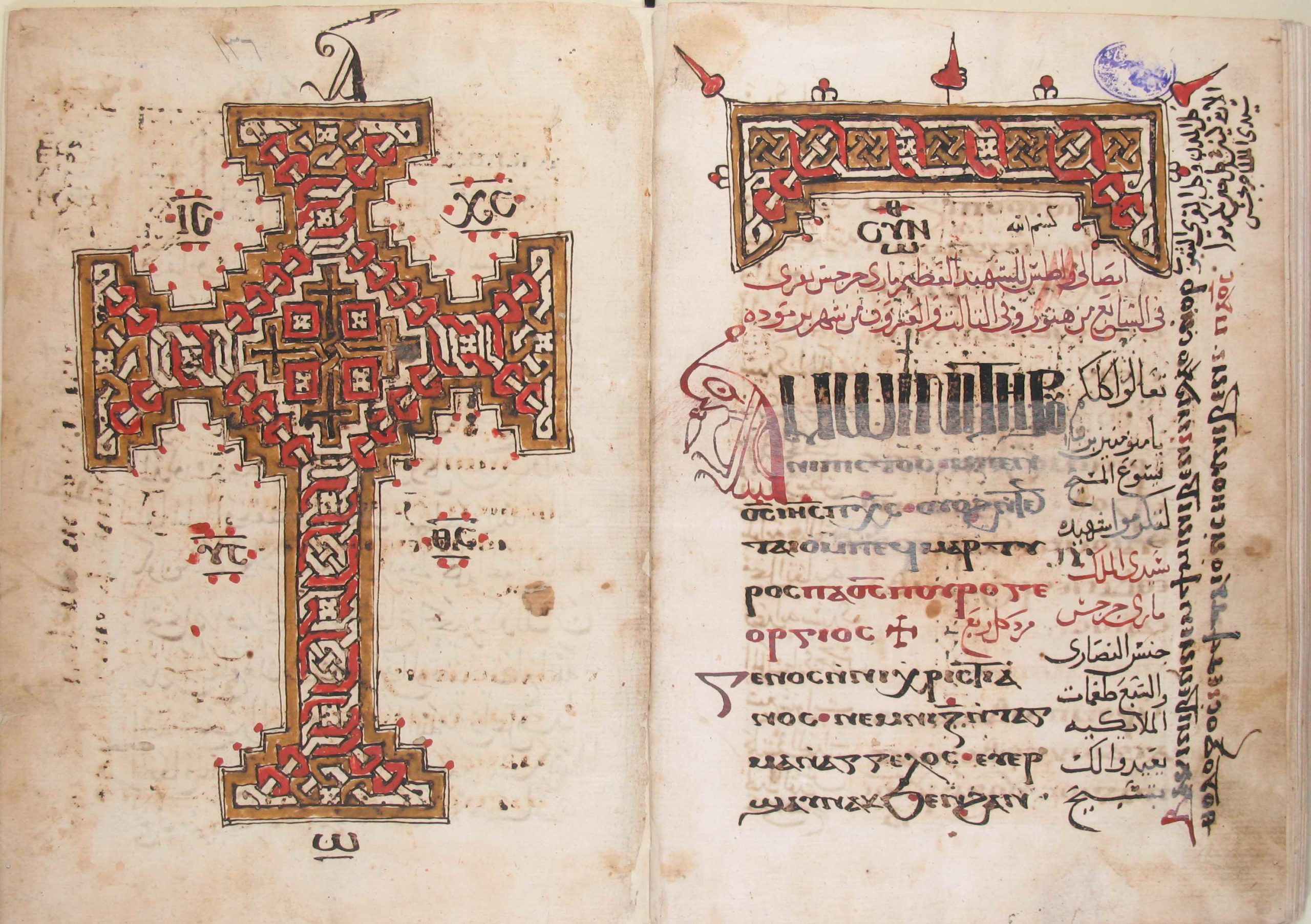 The book includes a full, detailed chapter on the place where St George was martyred. It cites historical evidence that he was tortured and martyred in the city of Sawr, present-day Mosul in Iraq.

After he was martyred, countless miracles have over the ages been attributed to St George. The book cites many that had not been known before.

The first church named after St George was built in his birthplace of Lydda. The book gives what it describes as the miraculous details of building and consecrating that church.

As to Egypt, the book explains that the first Mar-Girgis church was built in Egypt in the mid-Delta village of Berma, in Tanta, Gharbiya. The place, according to research, was chosen by St George himself in a vision.

The Saint’s relics were brought into Egypt in 1426 during the time of Pope Ghabrial, the 88th Coptic Patriarch. It was placed at the church of Mar-Girgis in Old Cairo, where it remains today.

St George is always depicted in armour, on horseback, spearing a dragon. The Mar-Girgis book explains the evolution of St George’s icons through the ages, all over the world, providing illustrations of more than 110 icons of the saint. 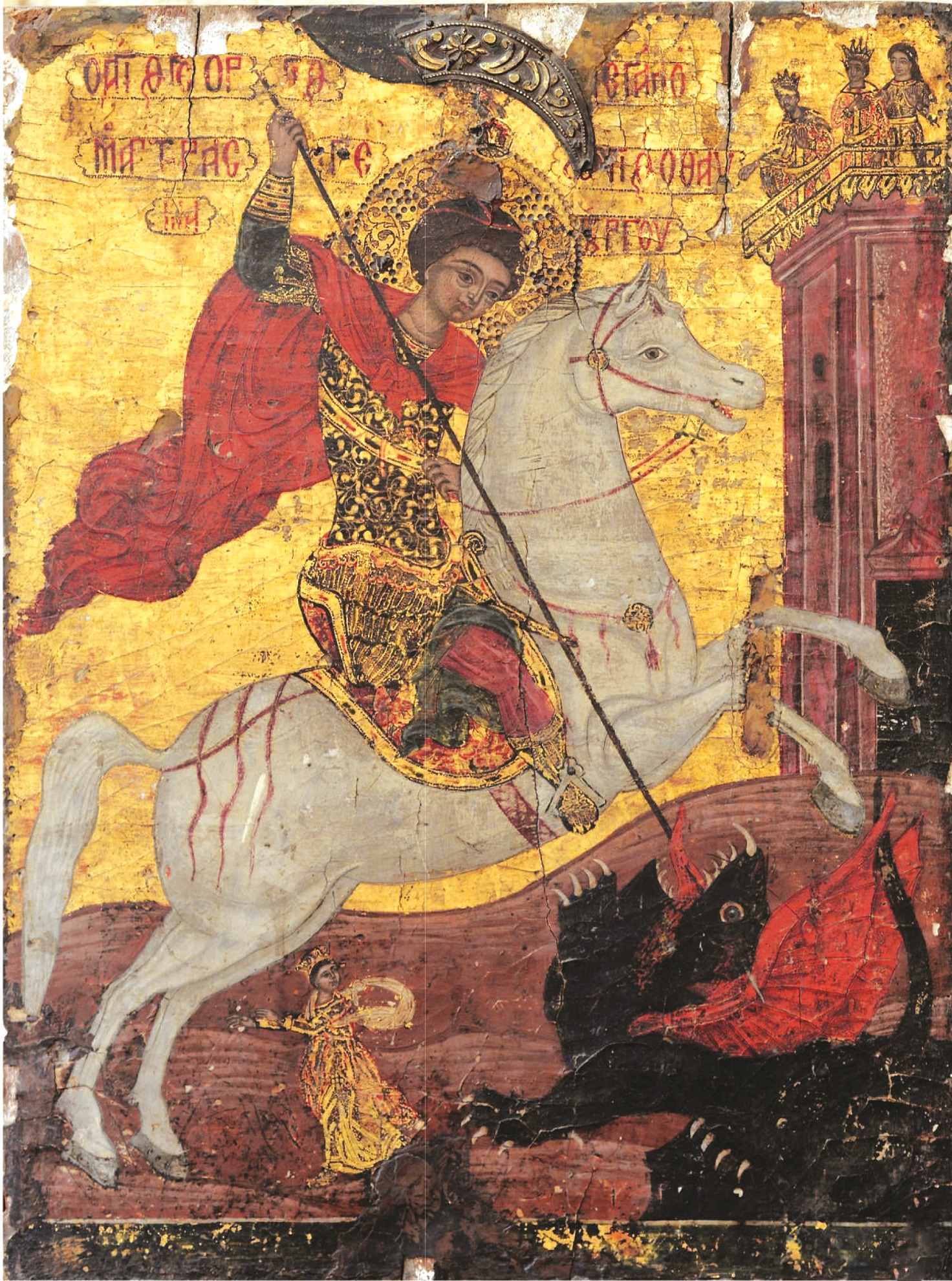 The biographers of St George are reviewed in the book. Among them were Church elders as well as patriarchs and bishops, and the Saint’s servant who wrote down the biography in the Roman language.

The book also includes historical glimpses of the countries and places mentioned in the manuscripts.

The titles and qualities of St George are detailed, also the biographies of two Egyptian saints named after Girgis: Mar-Girgis the Alexandrian and Mar-Girgis al-Mezahim.

The Mar-Girgis book details how the entire world celebrates St George: his picture on postal-cards and stamps; his statues in public squares; decorations and distinctions in his name; and the many churches all over the world named after him. 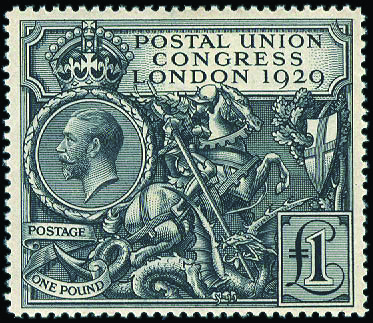 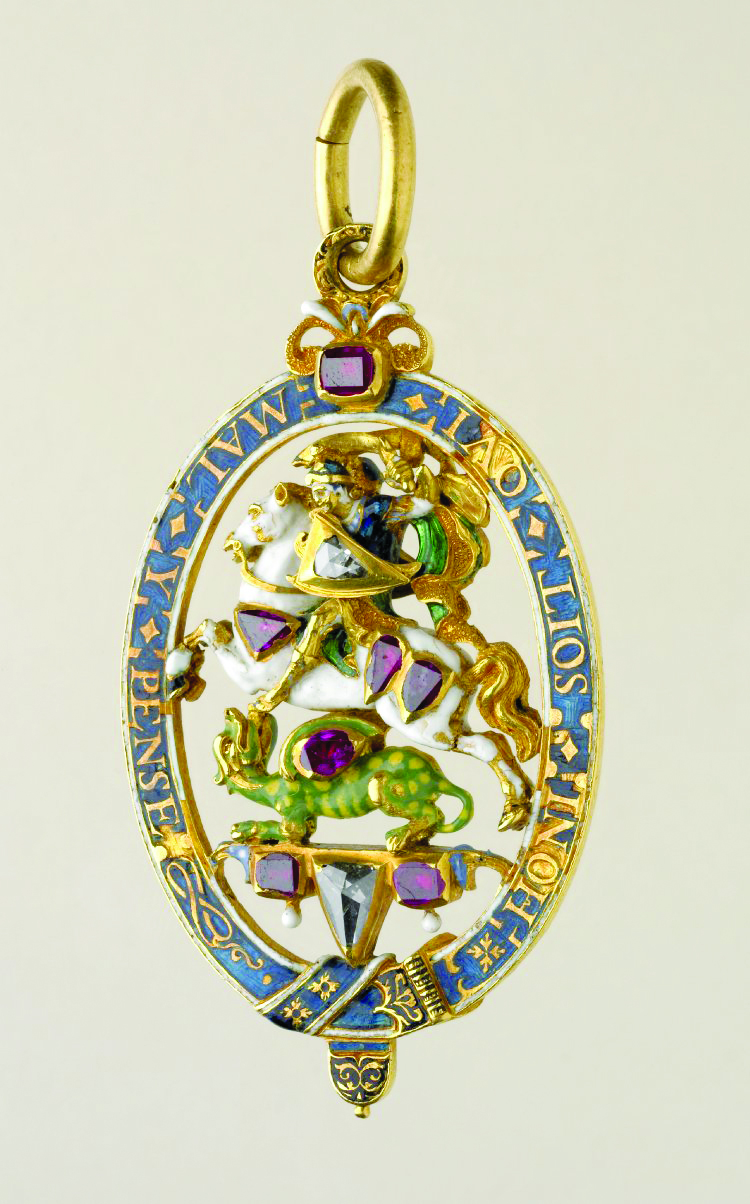 Although he had never set foot in Egypt or in most places in the world, St George is much loved and highly revered everywhere by old and young, rich and poor. It is a fulfilment of the promise God gave him before he was martyred: “My beloved George, your name will be highly praised by congregations all over the world on Earth and in Heaven. You are the pride of the martyrs and a brave soldier.”