Muslims in the village of Dabbous in Samalout, Minya, some 250km south of Cairo, have adamantly refused to allow the Coptic villagers to worship in a church the had built in the village in 2005 and consecrated to Mar-Girgis (St George) and Anba Rweis. Like countless other churches in Egypt, and in view of the near-impossibility of obtaining licence to build a church then, the Dabbous church had had been built without licence. With the Muslim villagers threatening unrest should the Copts have their way to pray in the new ‘church’, local security officials opted for peace and closed the building down. They assigned guards to make sure no Christian rites or payers were held there. The village Copts whose number exceeded 2000, together with some 40 other [extended] families from the neighbouring village of Waseela, had to go to other nearby villages that included churches if they wished to worship.
In 2008, the Coptic villagers made an attempt to hold Mass in the village during Lent, in a house owned by the Copt Benyamin Ghattas. Fr Philipos Henein used a mobile altar to hold Mass, but Mr Ghattas was arrested by the police and only released when he signed a pledge not to use his house for any future worship.
In 2009, the police arrested 32 Dabbous Copts who were holding a prayer meeting in a house in the village, and charged them with practicing Christian religious rites without licence. The prosecution later ordered their release provided they do not hold such meetings in the future.
All further attempts by Copts to worship in their village were defeated by the village’s Muslim hardliners. Even after the passage of the law for building churches in 2016, which included a clause that allows de-facto unlicensed churches to obtain licence to legally operate as churches, the Dabbous village church has not yet been licensed.
Dabbous Copts are not alone in suffering on account of being banned from praying in their home village; Copts in many other villages in Egypt suffer the same fate. It is not known yet how the new law for building churches will be enforced.

The photos show the Copts exiting the village on a Sunday morning to pray in a nearby village. 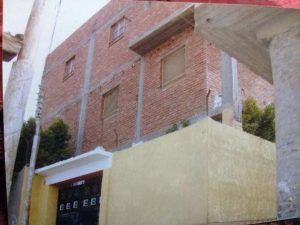