News of the demolition of the 115-year-old church of the Holy Virgin in Luxor, to make way for archaeological excavations, has spurred angry, fearful comments by Copts on social media. The Church, however, has denied such news, explaining to Watani that no official decision has been issued to that effect. What is taking place now, the Church in Luxor confirmed, is demolition of the stone wall which surrounds the church.

Luxor, which today sits on the site of ancient Thebes, the capital of Egypt during the New Kingdom in 1570 – 1069 BC, is home to the famous al-Kebash Avenue, also known as Avenue of the Rams or Avenue of the Sphinxes, which dates back to that period. At 2,700 metres long and 76 metres wide, al-Kebash Avenue is among the largest walkways of the ancient world. It was the processional route that linked Luxor Temple with the Temple of Mut at Karnak to the south, and is lined with some 1350 ram-headed or human-headed sphinxes. Those at the beginning and end of the avenue, at the entrance of the two temples which lie some 2,700m apart along the Nile bank in Luxor, had been above-ground, but a considerable portion of the avenue remains unexcavated, buried underneath the modern-day city. The government is conducting a project to excavate it in full.

The Holy Virgin’s in Luxor is situated close to al-Kebash Avenue, and has thus been a potential target for demolition in order to allow excavation. Some eight years ago when the excavation project started, a few buildings belonging to the church and lying close to it were pulled down, but the church remained untouched. The project was halted, however, when the Arab Spring uprising erupted in 2011. But now that the project has resumed, questions arise as to what will be done about the church.

A Church source has confirmed to Watani that an official committee recently visited the site of the church of the Holy Virgin to ask to pull down the wall. The Church did not stand in the committee’s way but asked that no drill be used, so as not to harm the church’s foundations. The demolition of the wall was thus carried out manually. The Church pointed out that the Holy Virgin’s church houses the relics of the saints Anba Marcus and Anba Bassilius.

A meeting between the Minister of Antiquities, representatives of the local government and Church officials is expected next week to resolve the matter. According to the Church source, the main church building ought not to be touched. 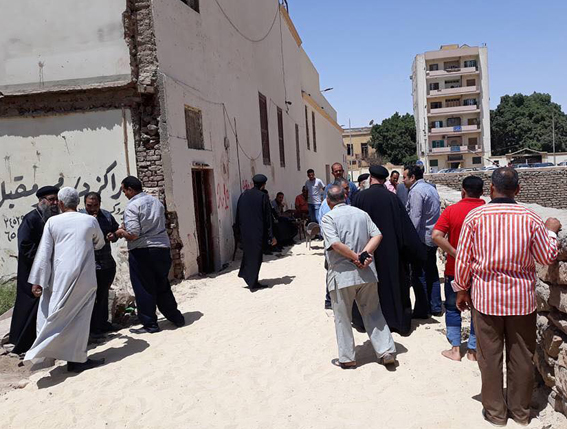