A team of restorers from Egypt’s Ministry have Antiquities have successfully renovated and re-erected the obelisk of Queen Hatshepsut who reigned as a Pharaoh in 1478 – 1458 BC.

The pink granite obelisk had been originally erected at Karnak Temple in Luxor, but collapsed and fell in the wake of a destructive earthquake in centuries of antiquity. In the early 20th century, French Egyptologist George Legrain found the ancient obelisk; he removed the upper part but laid it down beside the artificial sacred lake in the temple complex, where it for some 100 years.

According to Mostafa Waziri, Secretary-General of the Supreme Council of Antiquites, recent studies showed that the obelisk’s location next to the lake carried hazards to the ancient monument which this had to be re-erected in its original place.

The restoration and re-erecting of the obelisk was carried out according to the latest scientific methods, Mr Waziri said, and in collaboration with the Engineering Authority of the Armed Forces, which provided the necessary equipment.

The obelisk is 11 metres high and weighs 90 tons. It is decorated with scenes depicting Queen Hatshepsut and her relationship with the deity Amun, and displays his different names and titles. 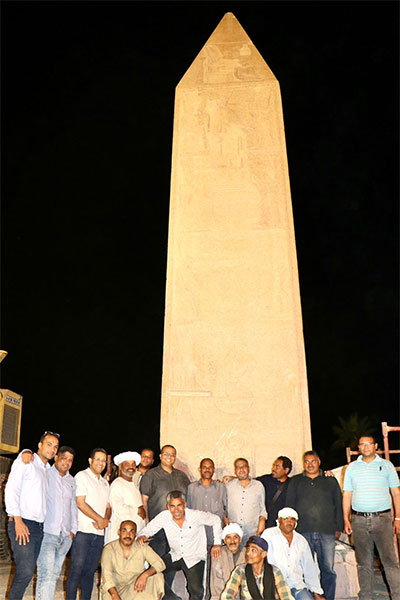