Farrah el-Dibany’s rendition of the Marseillaise during the event held on 24 April in Paris’s Champ-de-Mars at the foothill of Tour Eiffel to celebrate the election of President Emmanuel Macron for a second term, has enthralled many Egyptians. They took to social media to express their pride in and admiration of the Egyptian mezzo soprano Dibany, even though ultra-conservatives and religious fanatics were of a different opinion. 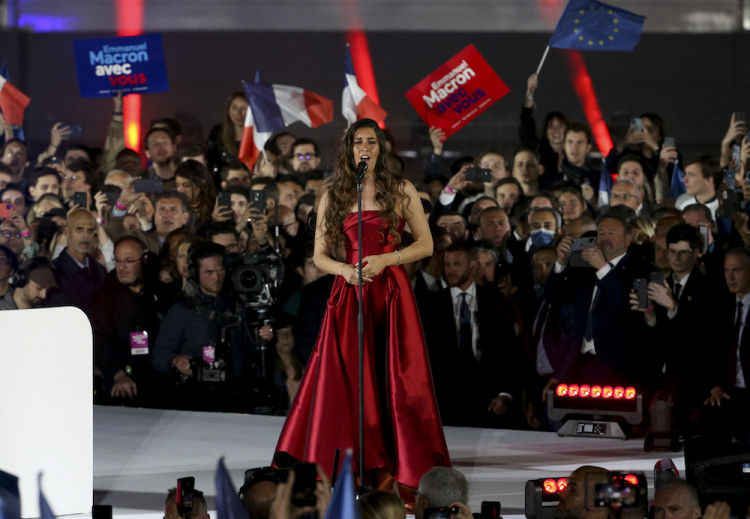 Pride vs ire
Maya Morsy, President of Egypt’s National Council of Women posted an ecstatic: “Egypt’s soft power … Egypt is there”, while Nevine Simaika excitedly wrote: “What a good morning to all here! An Egyptian has sung the French national anthem to crown Macron’s speech for his re-election as president … A beautiful message to ultra- rightists.”Pride in Egypt, France and the gifted Dibany was expressed by Wahba Saeed who posted: “Egypt is truly great; Egyptians are gifted people. Here is a live we are all proud of: the young Egyptian Farrah el- Dibany has amazed us with her outstanding rendition and her self confidence. We appreciate President Macron’s choice of her distinctive performance. We wish this beautiful, singular Egyptian singer brilliant success. 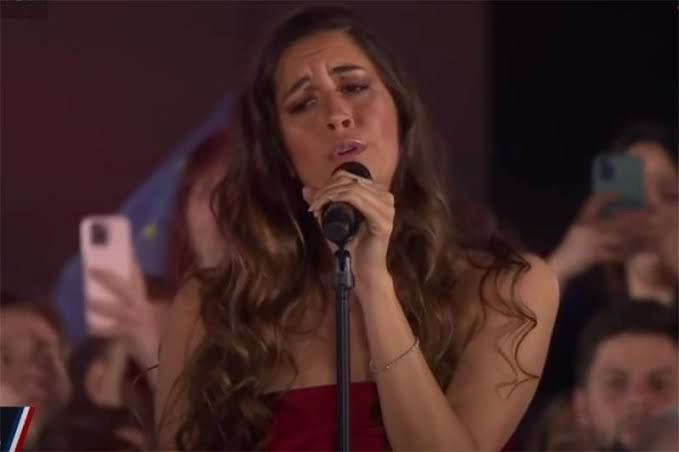 ”For Amro Saleh, however, it was: “You keep on saying she’s Egyptian, but we’ve seen nothing of her in Egypt; she lives in France.” Saleh appears to be unaware that Dibany was raised in Alexandria, Egypt, and had her first lessons in singing at the hand of the greatEgyptian soprano Nevine Allouba; she gave a number of performances in Egypt, which were always well attended; and that she is in Paris now following her winning of the French Opera House’s Prix Lyrique de l’AROP in 2019. Sameh Shalash summed it all up, however, with his: “Farrah el-Dibany has made all Egypt proud.”Conservative Muslims had scathing, offensive criticism for President Macron kissing Dibany’s hand. Aldad MuhammadIslam saw the hand-kiss as “an insult to Muslims in the holy month of Ramadan”, and Nari Ben saw it as “a new form of Islamophobia. ”For Hanan Elhusseiny, however, the moment President Macron kissed Dibany’s hand was a moment that brought joy to all Egyptian hearts.

Presidential deference
The Champ-de-Mars, was on 24 April the scene of celebration by President Macron and large crowds of his supporters. Egyptian mezzo-soprano Farrah el-Dibany, in a superb red dress, sang La Marseillaise, the national anthem written by Rouget de Lisle in 1792. She sang the most famous verse of La Marseillaise and of course its chorus. President Macron and his wife remained on stage as Dibany sang with the Eiffel tower glowing in the background. The President of the Republic, visibly moved, thanked her with deference by kissing her hand. 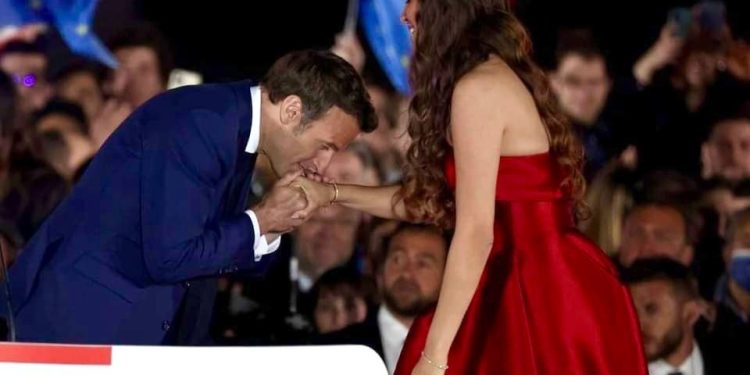 “Originally Egyptian, not French”
Talking to Egyptian and French media, Dibany said that, a day before the ceremony, an event organiser from the French presidency contacted her and asked her to sing the national anthem after the president’s speech in the event that he won. “It was really emotional and exciting for me,” she said, “a moment that was not at all easy. “I was in Geneva then, so I took the train Sunday morning, and as soon as I arrived, I went to the Champ de Mars to do the rehearsals and to decide whether to perform with an orchestra or acapella. Monsieur and Madame Macron took the decision that they preferred I sing La Marseillaise acapella.“I was immensely moved by the invitation to perform.” Dibany said. 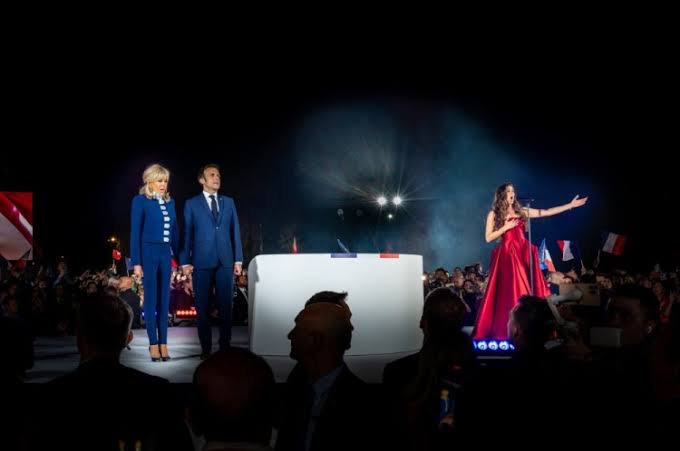 “What touched me most is that I’m originally Egyptian not French, and for me to have the honor to be invited to sing the La Marseillaise to all of France was very moving,” she said. “President Macron later thanked me warmly, but I thanked him in return, as it was such an honour for me. ”Dibany said she was very touched by the reaction of the French President and his wife as soon as she went up to the stage, as they saluted her and Macron kissed her hand. “They have seen me before when I sang for them, and I could not imagine that he would greet me and bow and kiss my hands. I was proud of this moment,” she said.

Stunning red dress
Dibany’s stunning strapless metallic red gown was from Gemy Maalouf’s Fall/Winter 2022-23 collection. Talking to Vogue.me, she explained that she said that she had previously seen the red number, and after the invitation, she enquired whether it was available. “I immediately contacted Giorgia Viola for my look, who dressed me in Gemy Maalouf. She is a Lebanese designer whose clothes I wear whenever I can. Red was the perfect color, as the Macrons wore blue, and I was in red, and of course, it is one of the three colors of France’s flag. The dress was also validated by the Elysée.” 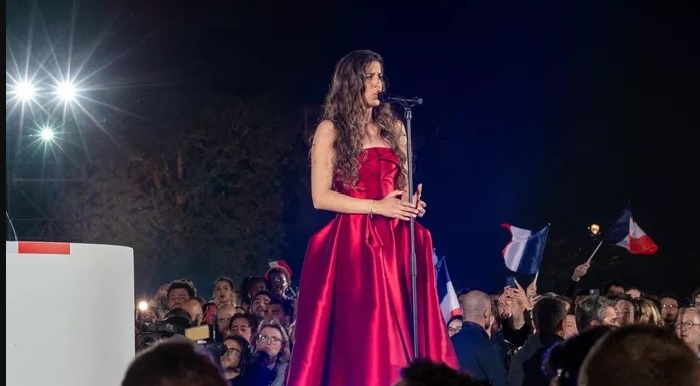 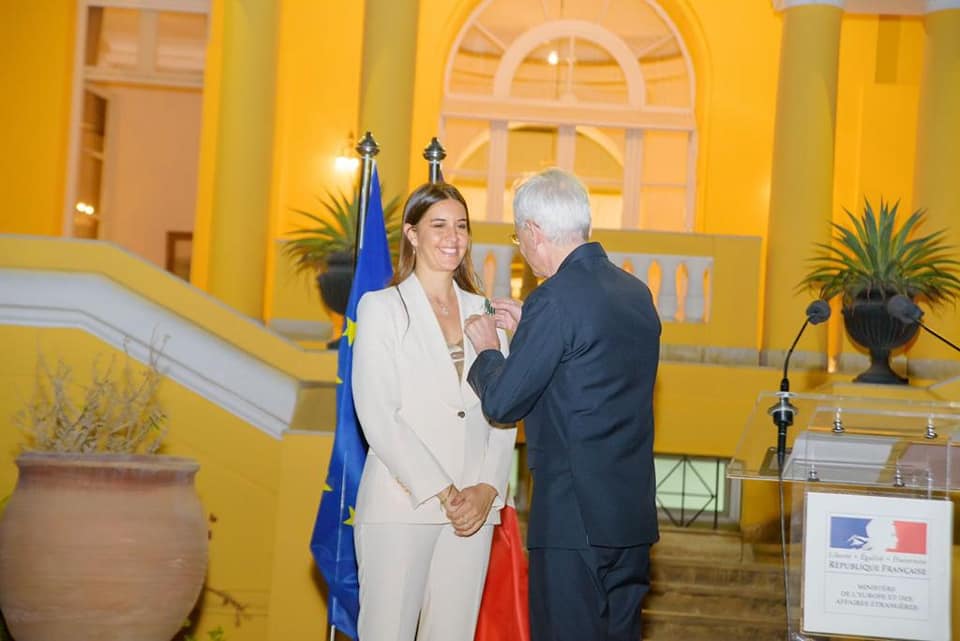 Farrah El-Dibany was born in 1989 in Alexandria, Egypt. Replying to Watani questions in 2019, she wrote: “My journey with singing started when my teacher in the German school in Alexandria heard my voice and encouraged me to train at the Opera House. So I started training with the prominent Egyptian soprano Nevine Allouba.
“I was brought up in a family which, back to my grandparents, was enamoured of classical music and opera, so I grew up feeling that music was part of me. I was continuously encouraged by my parents and grandparents to pursue training at the opera and to finish my architecture studies. I trained and worked hard to hone my talent and achieve a professional standard in singing.”In 2005, Dibany enrolled in the Arts Centre of Alexandria’s Bibliotheca Alexandrina and then in 2010, the Hanns-Eisler Academy of Music in Berlin. She obtained a Master’s degree at the Berlin University of the Arts and a Bachelor’s degree in architecture at Berlin’s Technische Universität. “But singing has always been my talent and passion,” she said. 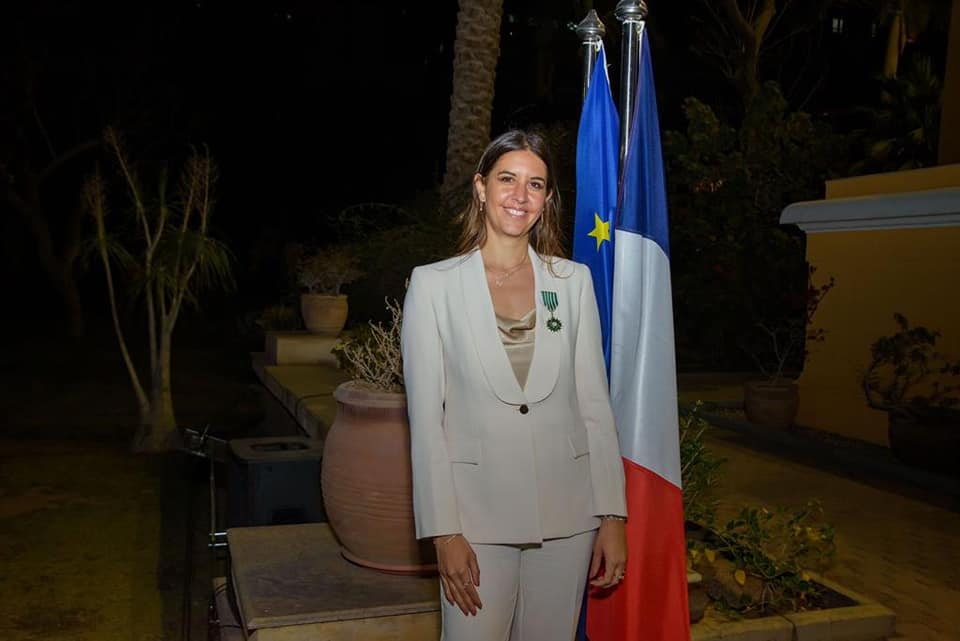 Brilliant career
In 2013, Dibany was awarded 3rd Prize at the International Giulio Perotti Singing Competition and she sang the role of Cornelia in Handel’s Giulio Cesare at the Cairo Opera. In 2014, she appeared as Ramiro in Mozart’s La finta giardiniera and Dido in Purcell’s Dido and Aeneas at the Radialsystem V in Berlin and then, in 2015, in the title role of Carmen at the Neuköllner Oper. She was also named Best Young Opera Talent by Opernwelt magazine. She reprised the role in Rheinsberg after winning a prize at the 2017 Kammeroper Schloss Rheinsberg Festival. In 2018 She was awarded the “Wagner Stiftung” Prize and performed for the occasion at the Komische Oper in Berlin and at the Bayreuth Festival. Her repertoire includes the alto solo sections of Pergolesi’s Stabat Mater, Mozart’s Requiem, Rossini’s Petite Messe Solennelle and Beethoven’s Ninth Symphony, the Second and Third Lady in Mozart’s Die Zauberflöte, Amastre in Handel’s Xerxes, Martha in Tchaikovsky’s Iolanta, Orfeo in Gluck’s Orfeo ed Euridice, and Orlofsky in Die Fledermaus. She performed the alto solo passages of David Lang’s The Little Match Girl Passion at the Palais Garnier for a choreographed piece by Simon Valastro. She also performs at the Paris Opera Academy where her roles include Kate Julian in Owen Wingrave and the Little Miss in Philippe Boesmans’ Reigen. Farrah El Dibany joined the Paris Opera Academy in September 2016.In 2019, Dibany became the first Egyptian or Arab ever to win the Prix Lyrique de l’AROP. The award is considered the most prestigious an opera singer can receive, courtesy of the Paris Opera House. At the time she said: “This put me before a looming challenge. It was a victory to achieve such a near-impossible success, but it was also a big motivation to rise and excel.”