An hour to persuade my wife to join me and the children on a visit to the Book Fair! The 52nd Cairo International Book Fair, held by Egypt’s Ministry of Culture during the first two weeks of July, was being held at the new fairground in the east Cairo satellite town of al-Tagammu al-Khames (Fifth Settlement). But my wife had unpleasant memories of the Book Fair in the old fairground in Nasr City, where overcrowdedness and chaos prevailed. An added advantage was that the Fair was this year being held in July instead of the usual January date, meaning that the children were on their summer school holidays so could enjoy it to the fullest. Well, my wife finally said she’d come so I set about buying our tickets. 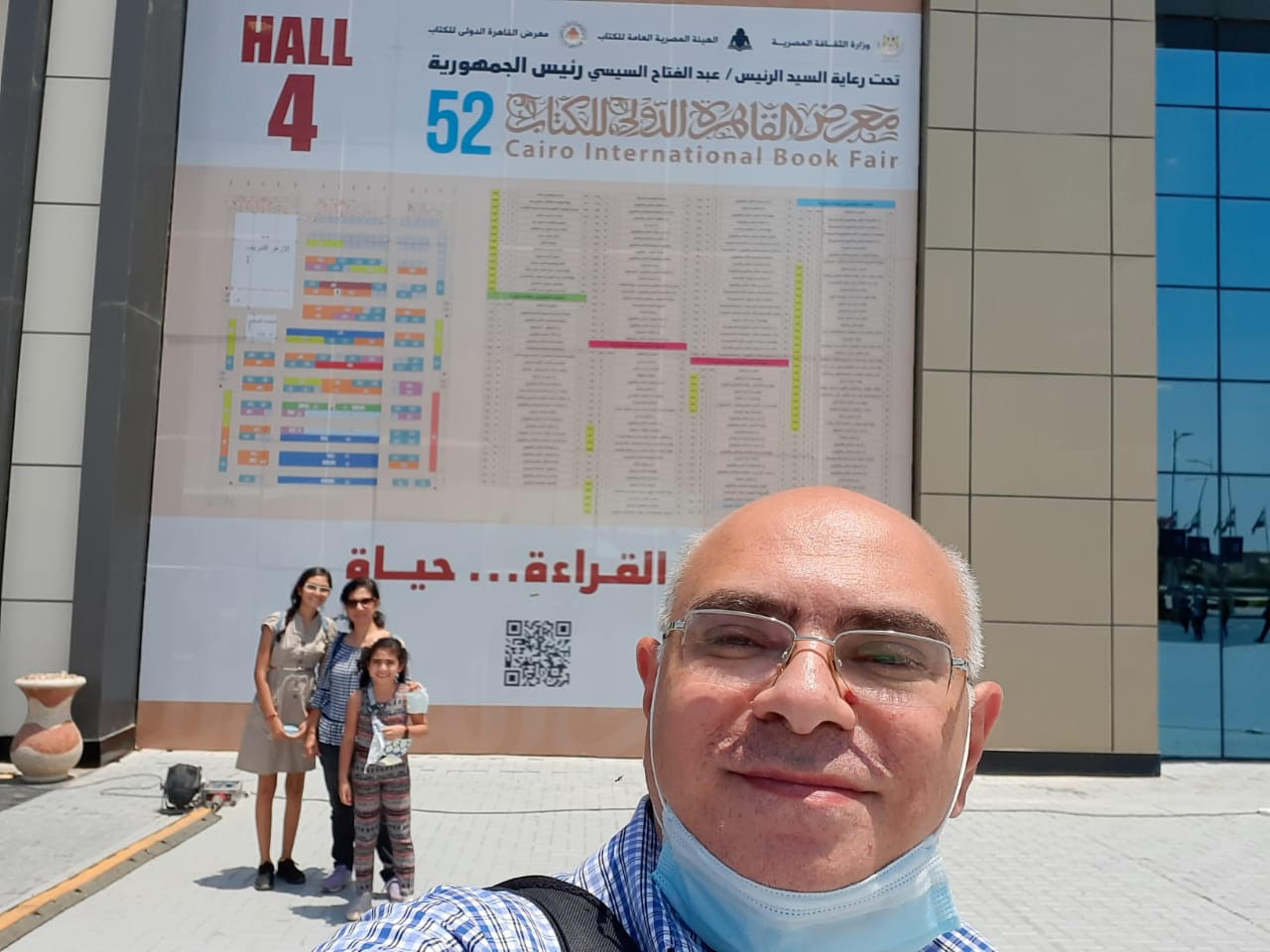 Tickets were sold only through a mobile phone application, in order to limit the number of daily visitors as a COVID-19 precaution. I found that each mobile phone number was entitled to four tickets throughout the period of the Fair and, to my surprise, the tickets were free of charge. It was obvious that the Ministry of Culture’s General Egyptian Book Organisation (GEBO) aims at encouraging people not to miss that outstanding cultural event. My online ticket included the date I had selected, the gate I would get in through, and a QRCode. Now we were all set.

Off to the fair

My two daughters aged 14 and 8 were so excited at their first visit to the Book Fair that, on the eve of the visit, they kept on planning for all the books and gifts they would buy, especially that their grandmother had given each a sum of money to spend there, in addition to what their mother and I had promised. 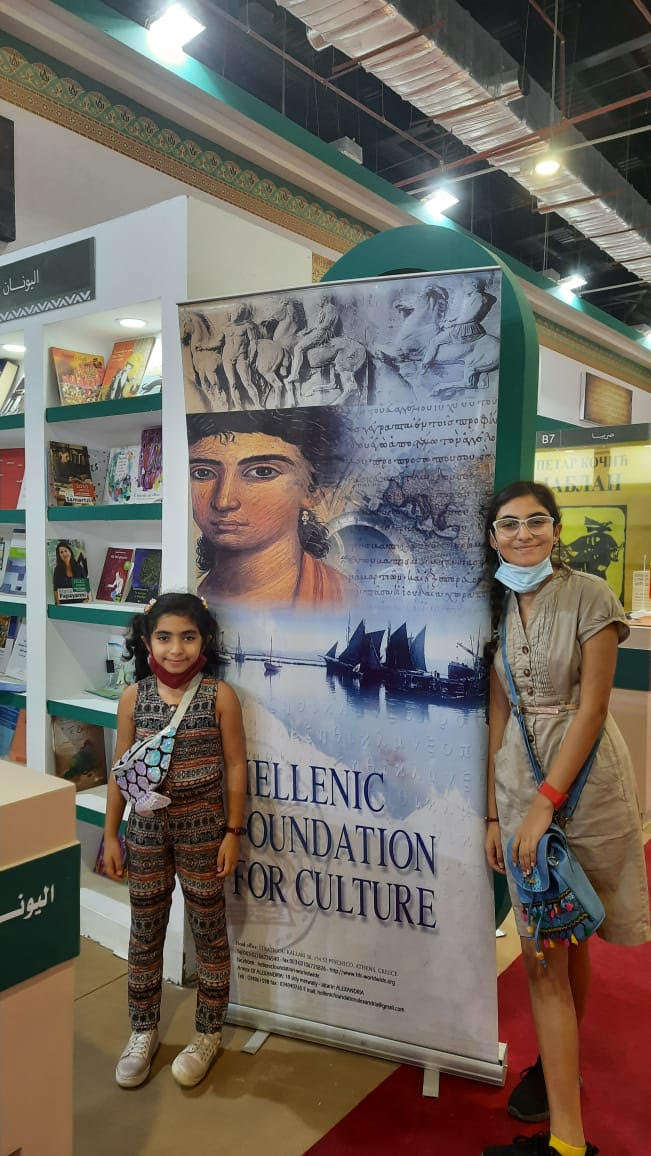 The two girls woke up at a very early hour the following day, their excitement beating that of going to the beach. They got dressed in a jiffy; I was happy they chose light cotton summer clothes to cope with the hot weather. They took their backpacks to stuff with the books they’d buy and ice-cold water bottles as though they were off for a picnic.

As for my wife and I, we started by setting a budget and shopping list, since we knew the temptation to overspend might be too strong. 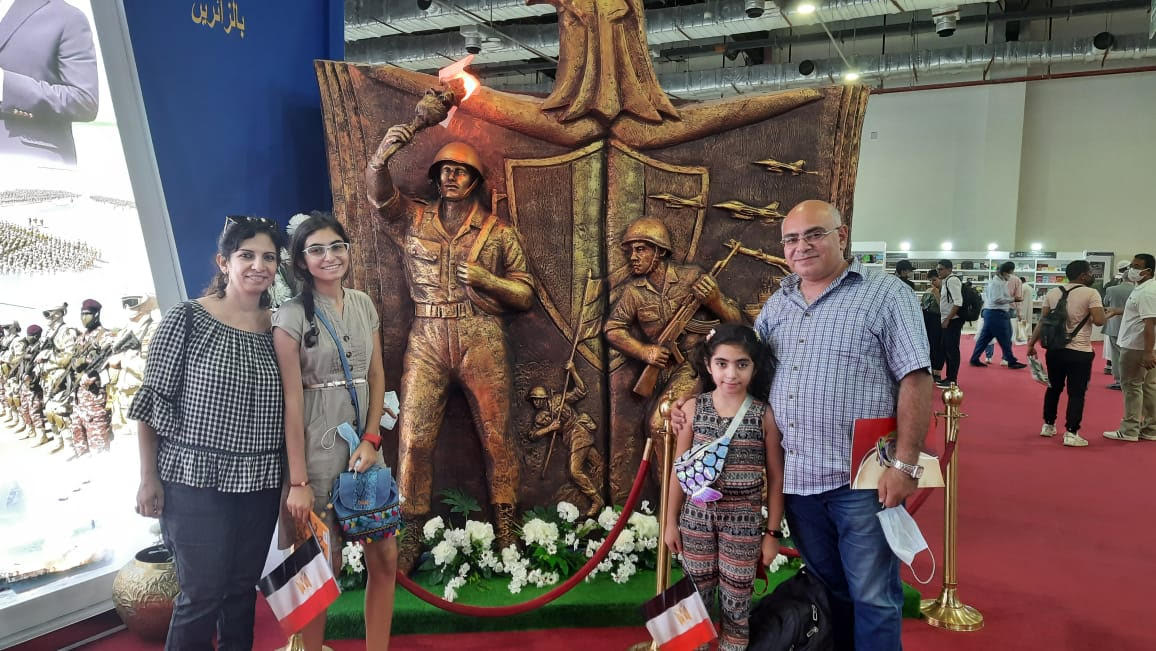 At the fairground in Tagammu, I found excellent parking facility, secured gates to the Fair, and pleasant young people scanning our e-ticket and ensuring we observed COVID precautions. “What a good start!” I thought.

Once inside, we decided to start our visit with Hall 4, the hall closest to the gate we entered through. We had noticed there were four halls, so thought we’d visit two of them, have a lunch break, then visit the other two, concluding with Hall 1. All the halls looked clean and well-organised. Young volunteers spread around, ensuring the place remained spotless and reminding visitors to wear face-masks and use hand-sanitisers.

At Hall 4, I was happy to find the pavilion of al-Ahram, the second oldest newspaper in Egypt, founded in 1875. We were captivated by old issues of the paper and microfilm footage that carried content on Egypt’s monarchical times—Egypt became a republic in 1953—as well as old advertisements, film-posters, and other interesting material. Al-Ahram Establishment is one of the biggest traders and distributors of books in the Arab nation.

Being in a language school, my daughters bought a number of English books; their mother and I interfered minimally in their choice to ensure that, compared to the copious content they found online, they would enjoy hard-copy reading. 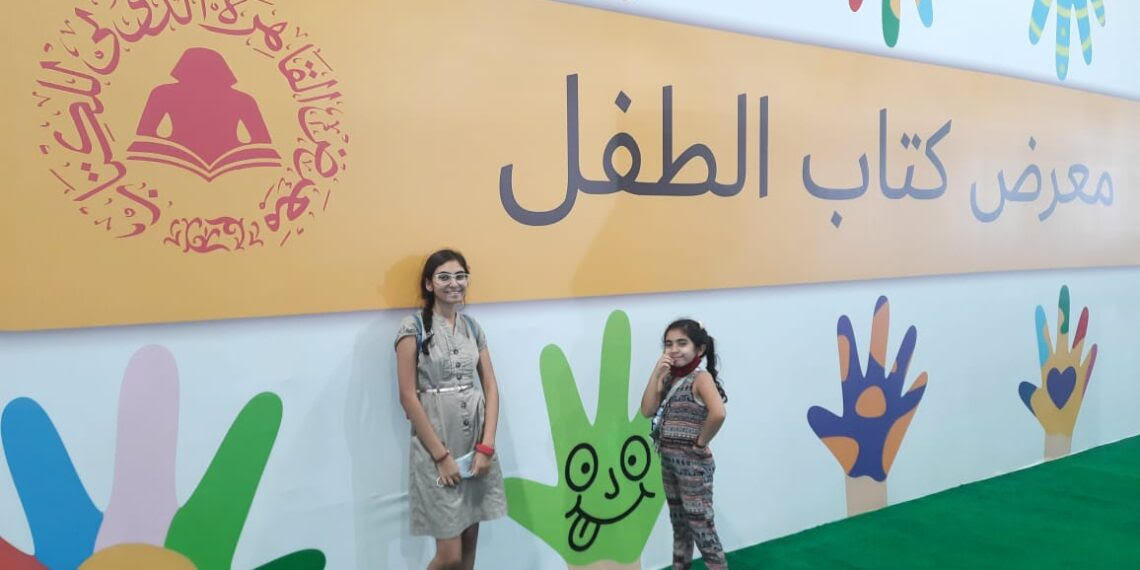 Hall 3 held for us a surprise: a pavilion assigned for children, a first for the Book Fair. My youngest daughter went into a state of exhilaration, intoxicated with the vivid colours, great variety of books in all languages, gifts, and educational and entertainment digital material. She stood lost for where to start or what to buy. I finally managed to hold her hand and guide her around, warning that she should stay within her budget.

We then headed to Beit al-Hikma, a Chinese publisher which displayed books translated from Chinese into Arabic, and again more gifts: book-marks, tea coasters, and Chinese toys designed to achieve better focus. 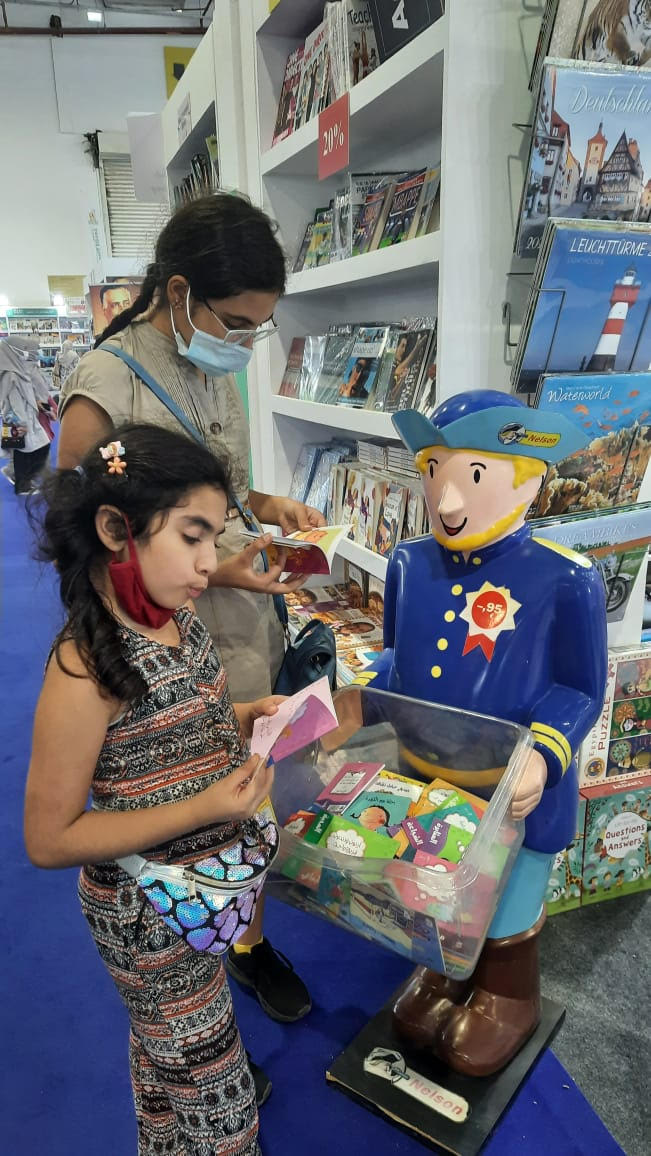 Hall 3 included pavilions for various cultural centres in Egypt, as well as a number of Egyptian authorities, including the National Authority for Remote Sensing and Space Sciences, the Library of The Egyptian Cabinet’s Information and Decision Support Center which displayed for the first time its Atlas of Egyptian governorates.

Cultural centres included the Korean, Japanese, Eritrean, Yemeni, Serbian and Greek. It felt as though we were on a trip around the world.

With the day halfway through everyone was due for a rest. We headed to the open space at the food court which offered a variety of delicious foods. The hour break allowed us to eat heartily, and review the books we had bought and the photos we’d taken. It was time to tour the other two halls.

Hall 2, double the size of each of the first two halls, featured Egyptian publishing houses. 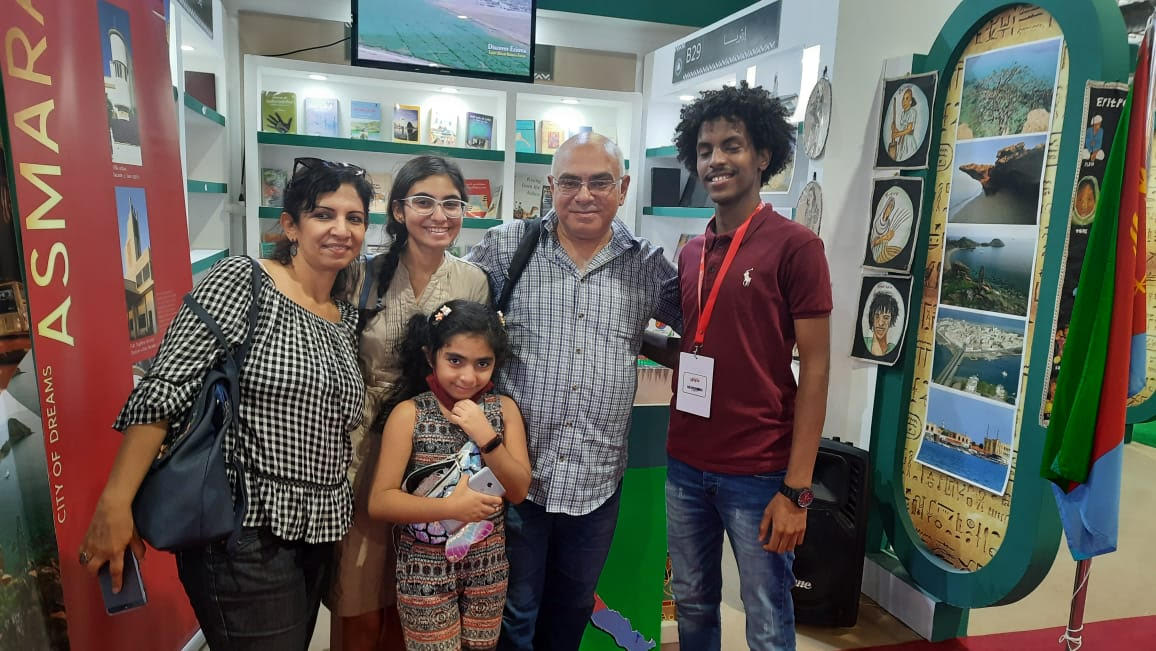 It took me a while to find a specific publisher and buy the books I needed. We then headed to Hall 1, which was dominated by Ministry of Culture publishers, most significantly GEBO and the National Centre for Translation. I found books at surprisingly affordable prices, as low as EGP20. This encouraged me to expand my shopping list, until my ever-well-organised wife reminded me we had not the space at home to accommodate all my purchases. 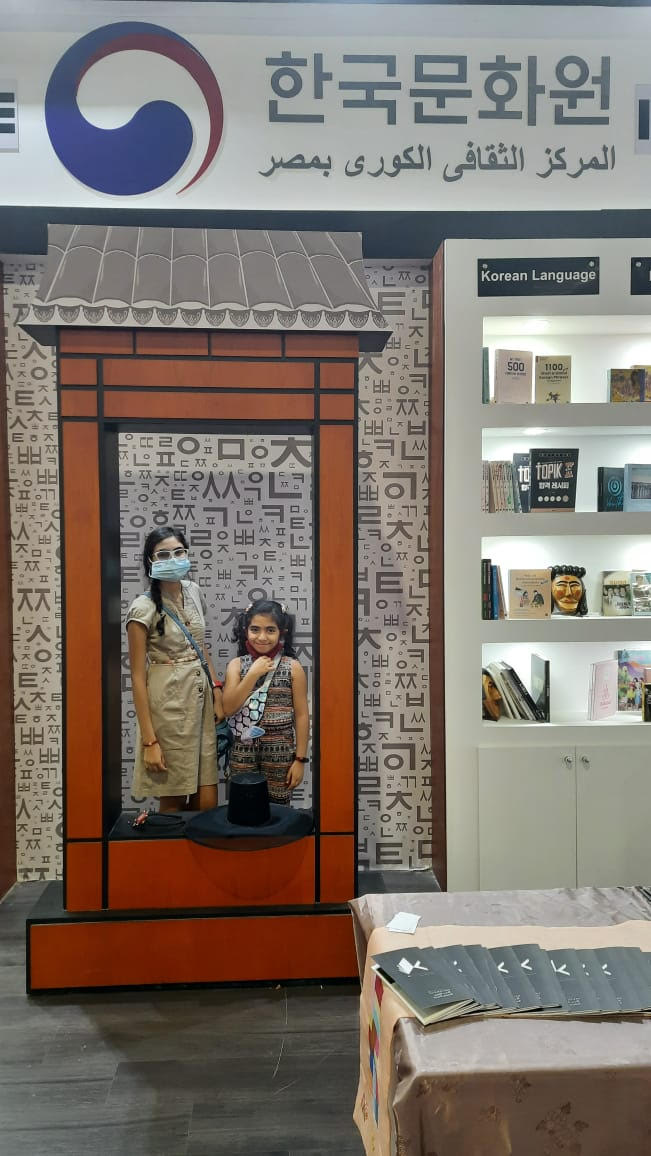 The lovely day concluded with our family of four leaving the fairground exhausted, carrying home a veritable trove of books and gifts. It was a day I’m sure our two daughters will never forget. 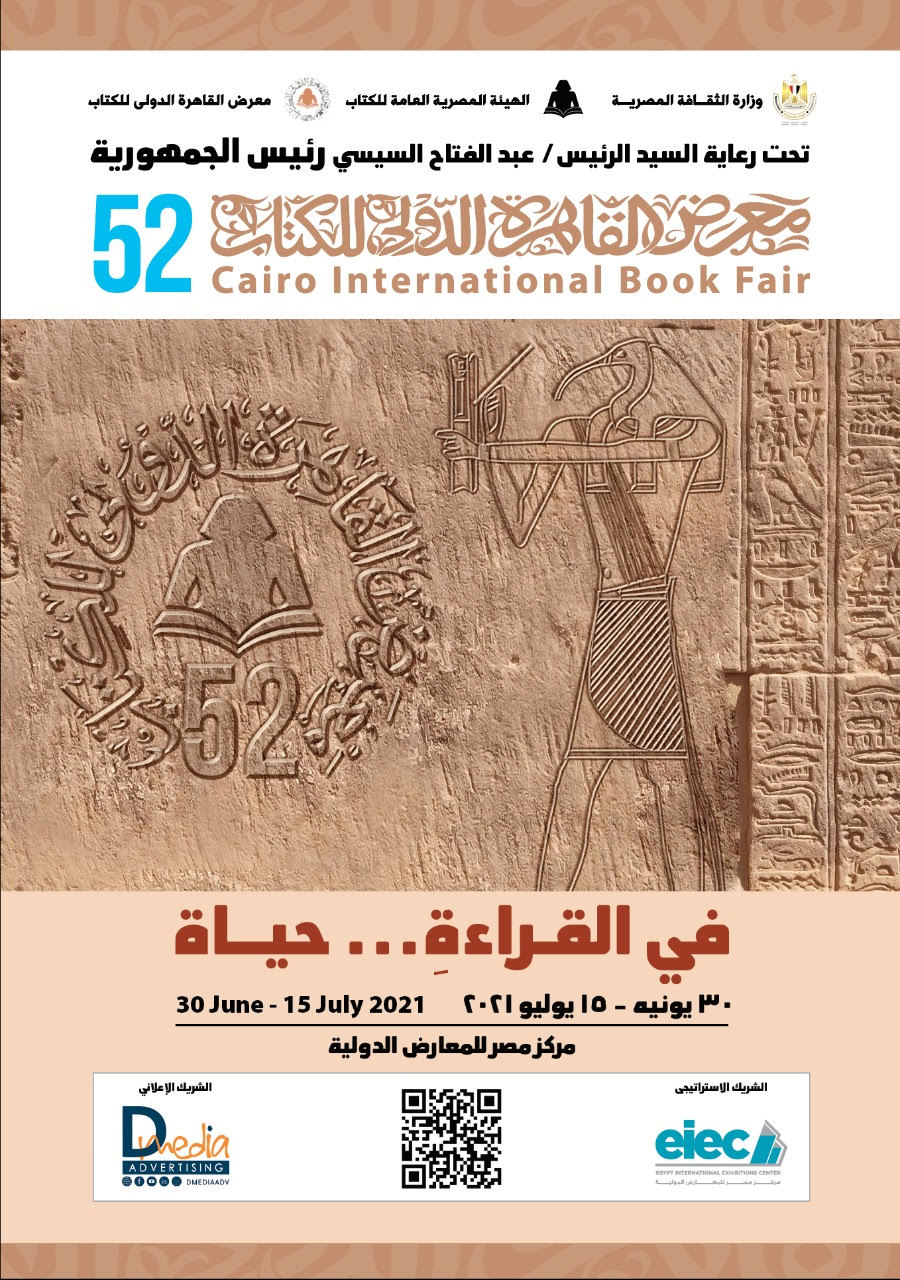 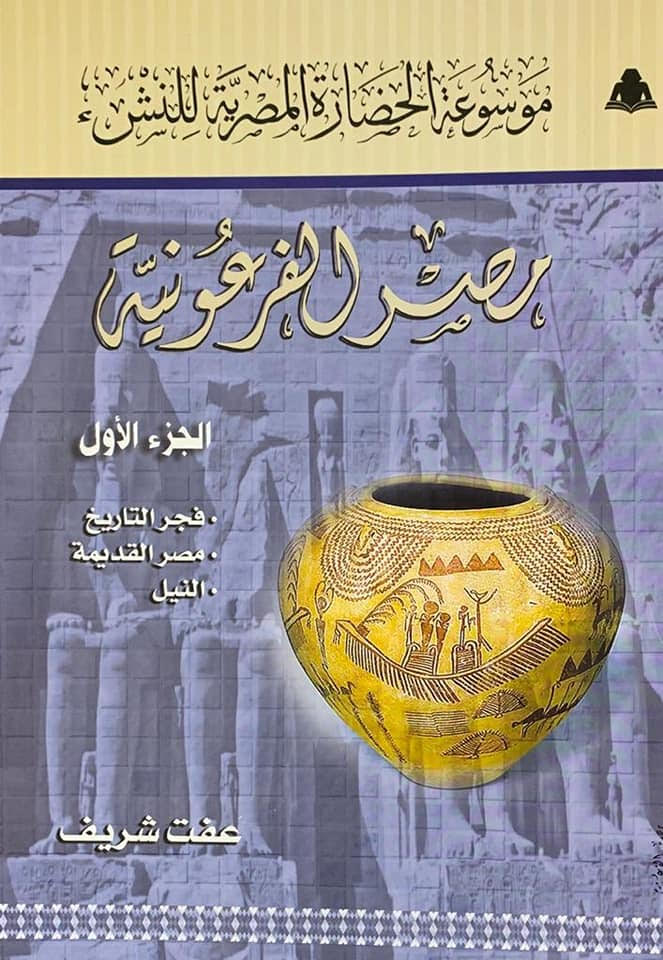