The 28th of this month will mark International Day of Aragouz, a day assigned by UNESCO to celebrate the Egyptian folk puppet show known as “Aragouz”. The Aragouz was in 2018 added to UNESCO’s List of Intangible Cultural Heritage in Need of Urgent Safeguarding.

“Aragouz” denotes the puppet show, and is also the name of the main character in the show.

A small portable stage, the theatre, is raised up on wooden stands between which a black curtain stretches concealing the puppeteer who would begin narrating the story through his distinctive voice impersonating the glove puppet characters. The puppeteer would control the Aragouz’s head with his index finger, and move its hands with his middle finger and thumb. 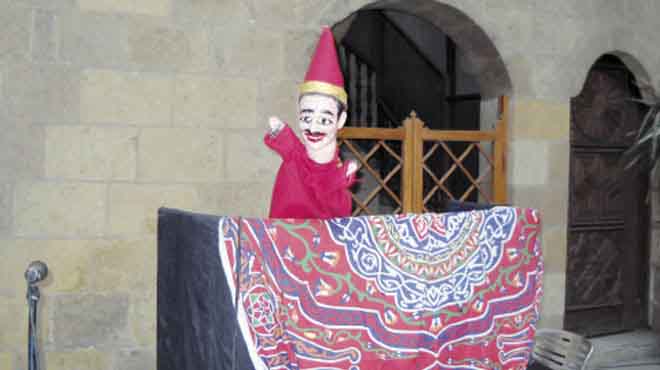 The puppet’s head was traditionally made of wood—it is now made of plastic—and the glove depicts the body which is usually represented by a long red robe of fabric. The head of the lead character is topped by a tartour (long conical hat), also made of fabric. A puppeteer puts a piece of whistle-like copper in his mouth to sound the Aragouz’sdistinctive voice, but copper involved health risks so had been replaced in modern times with stainless steel. Switching between high-pitched and low, gravelly voices, a sarcastic comedy of satirical proportions unfolds.

Aragouz is said to be as old as ancient Egypt, but flourished during the 10th to 16th century. It has long existed as a street folk art in various places in the country. But the modern-day version of Aragouz emerged in the 20th century, and exploited Egyptian culture and societal issues in its topics and characters. In 1957, the Egyptian government established the first glove puppet group, and two years later, one of the most popular children’s folk stories Al -Shater Hassan (The Clever Hassan) premiered at the Cairo Puppet Theatre. 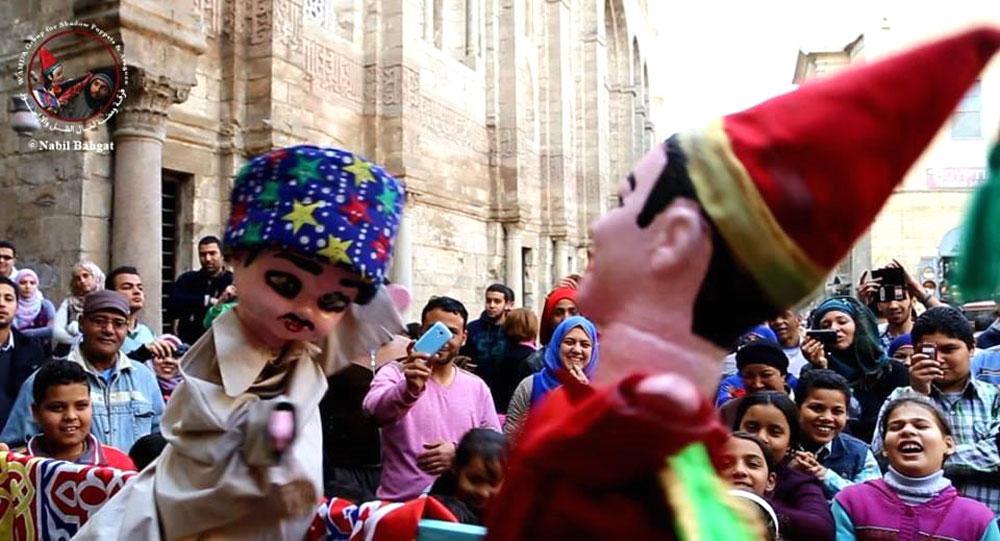 The Egyptian comedian and monologue artist Mahmoud Shukoku (1912-1985), nicknamed the “Arab Charlie Chaplin” championed the Aragouz puppet show till his name became almost synonymous with it. As a puppeteer, he insisted on wearing the long galabiya and the tartour during his shows.  Among his shows were The Sinbad Show and the Count de Monte Shukoku before the Puppet Theatre was inaugurated in the early 1960s.

Mustafa Othman (1935 – 2019), aka Amm Saber, was one of the most famous aragouz puppeteers in Egypt. He was one of Shukoku’s disciples, and used to work with “Wamda” troupe that has preserved the aragouz art by training young people in Egypt and abroad on how to perform with this puppet.

Among the most famous characters played by the Aragouz have been al-Fettewwa (the Bully), al-Khawaja (the Foreigner), al-Shaweesh (the Sergeant), and Osman and his wives Naffoussa and Bakheeta. The puppeteer changes his voice to play all the characters.

Today, the Aragouz tradition is alive and kicking.

An Aragouz and Traditional Puppet exhibition was recently held at Cairo University’s Teif art gallery. The exhibition, which ran from 19 August to 2 September, featured some 140 Aragouz glove-puppets, and marionettes made by 28 students of the Faculty of Specific Education. The students were given full freedom to create the puppets, no visual taboos were imposed; they were free to work, research, and form a variety of materials.

The idea was the brainchild of Usama Muhammad Ali, Professor of Art Education at the Faculty, who asked his students to give free rein to their imagination even as they respected the properties of the materials they used and applied the forming technology they had trained in to realise aesthetic visual quality. In addition, they had to have full knowledge of the type of puppets they create, their sizes, how they would move them, and their artistic and educational value and roles.

Watani talked to Dr Ali about the educational experience that turned the learning process for his students into an integrated creative process of incomparable joy and reward. 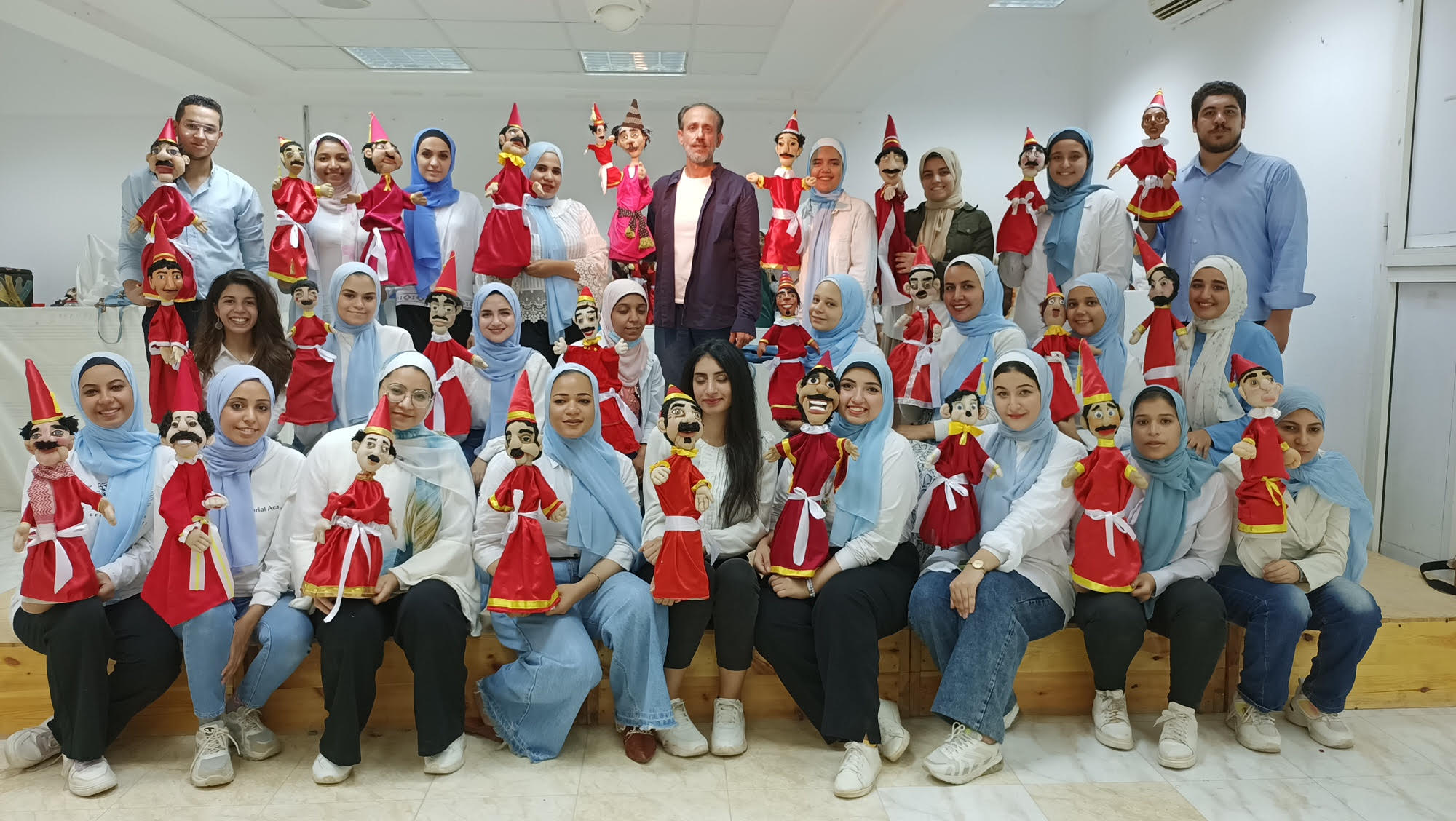 “I chose to assign my students this project of creating Aragouz puppets,” Dr Ali said, “because these exemplify an art form that invokes instinctive love and interest in all Egyptians. I have an ardent desire to develop this art, especially given that it represents an intangible heritage that needs to be safeguarded, preserved, and passed on to future generations. It is a heritage that is still healthy and alive; we cannot let it age and rush to its rescue when it is on the brink of death.

“I was also keen on this project,” he said, “given that I have research and creative experiences in puppets and Aragouz.”

“I am happy the exhibition was a great success,” Dr Ali said. He attributed that to the fact that it showcased Aragouz puppets created in modern forms through advanced methods. This yielded low-cost, easy-to-manufacture, easy-to-use-and-move puppets. Anyone could be taught to use these puppets because this depends solely on hand movement. “A great added value,” Dr Ali said, “is that these puppets have the capacity to embody societal and educational values.” 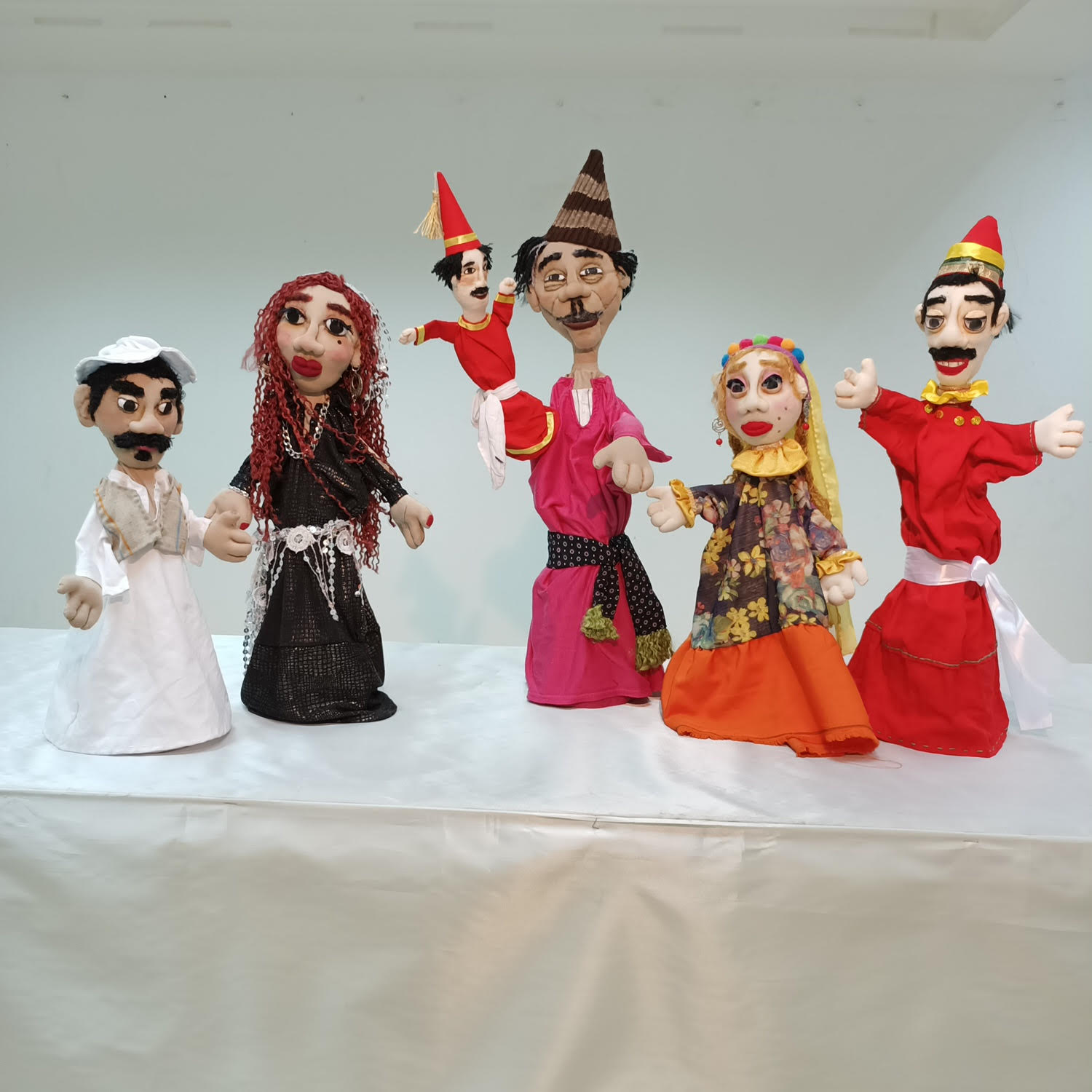 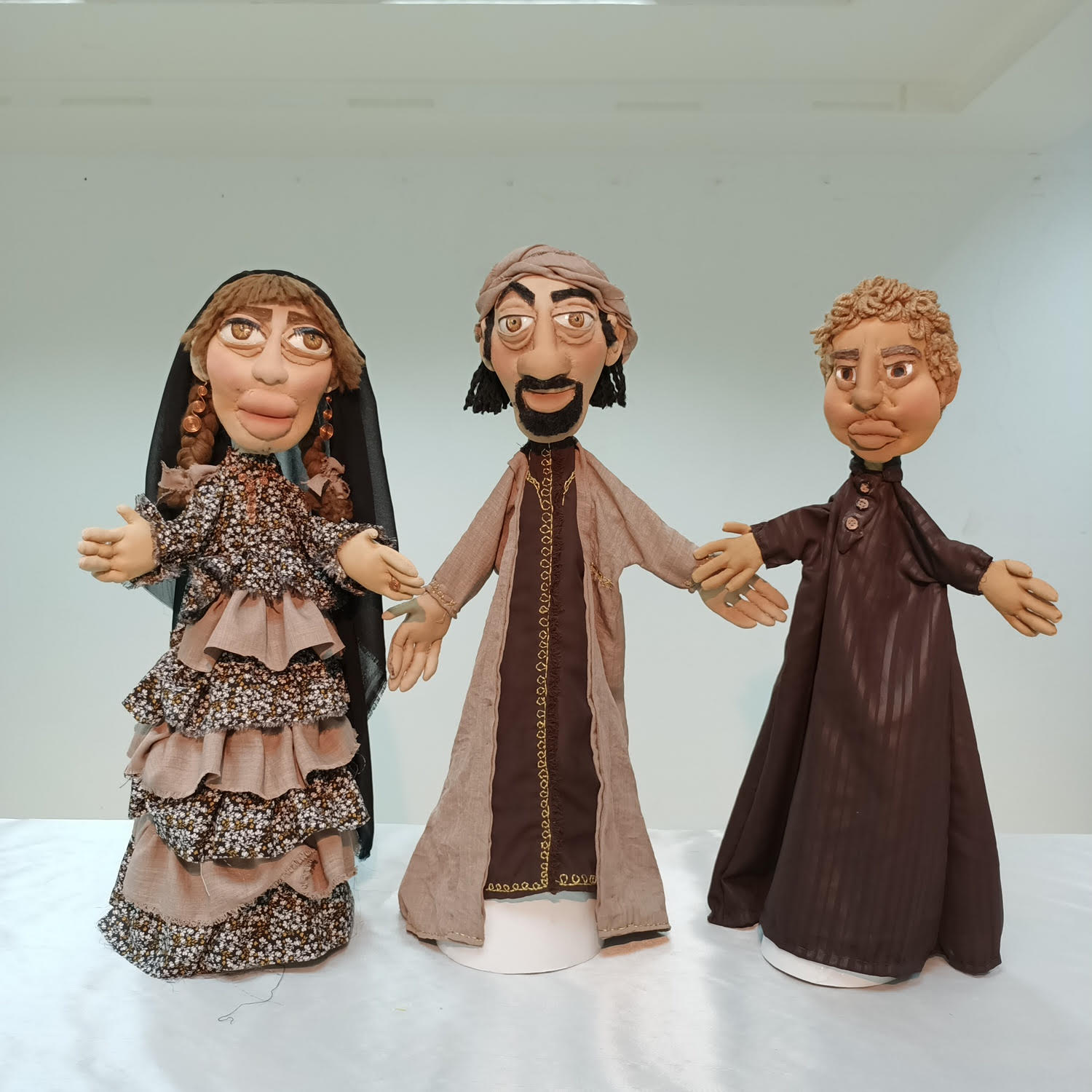 Dr Ali explained that creating an Aragouz show passes through multiple phases. “It starts with the production of glove puppets,” he said, “then goes on to involve the theatrical text, and the vocal and motion performance. My students’ project was the puppet creation. The goal was to shape a graduate who could seamlessly fuse into a team of artists that work in theatre, dynamic and vocal performance to integrate various forms of art into one masterpiece.

“I asked my students to create the Aragouz character as a child, young man or woman, smart or dumb, devilish or angelic, fat or thin, in different shapes from different regions.

“To be honest, I never expected the kaleidoscopic collection of some 140 puppets my students churned out. I was thrilled with the result. They used various materials—fabrics, papier-mâché, old clothes, and others—each of which gave a distinct visual expression.”

The students were no less thrilled than their teacher.

Hadeer Ashraf said that she experimented with many different, easily-formable materials until she finally decided which would best express her Aragouz puppet. “All this experimentation enriched my experience in shaping puppets, and this will definitely be augmented in the future,” she said. 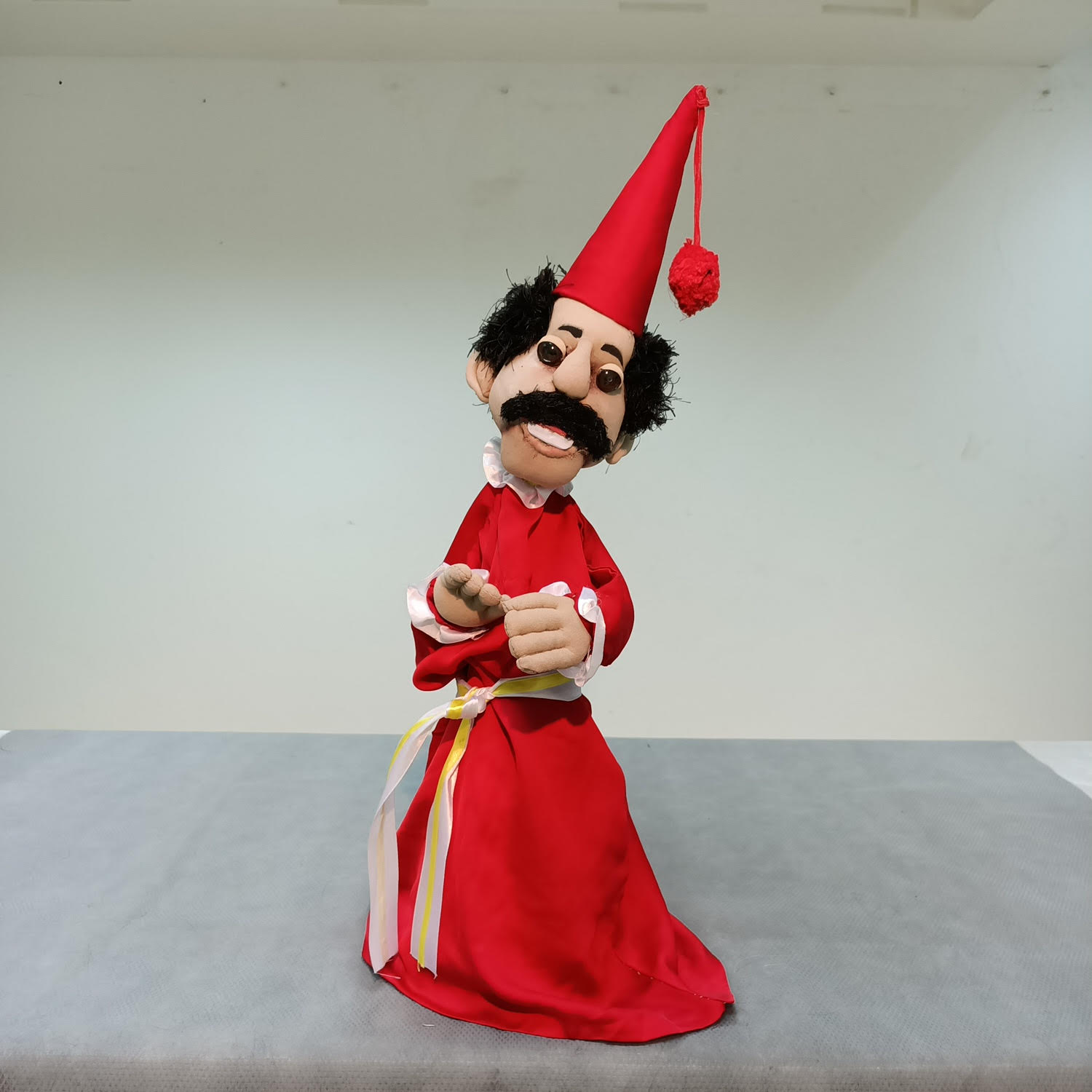 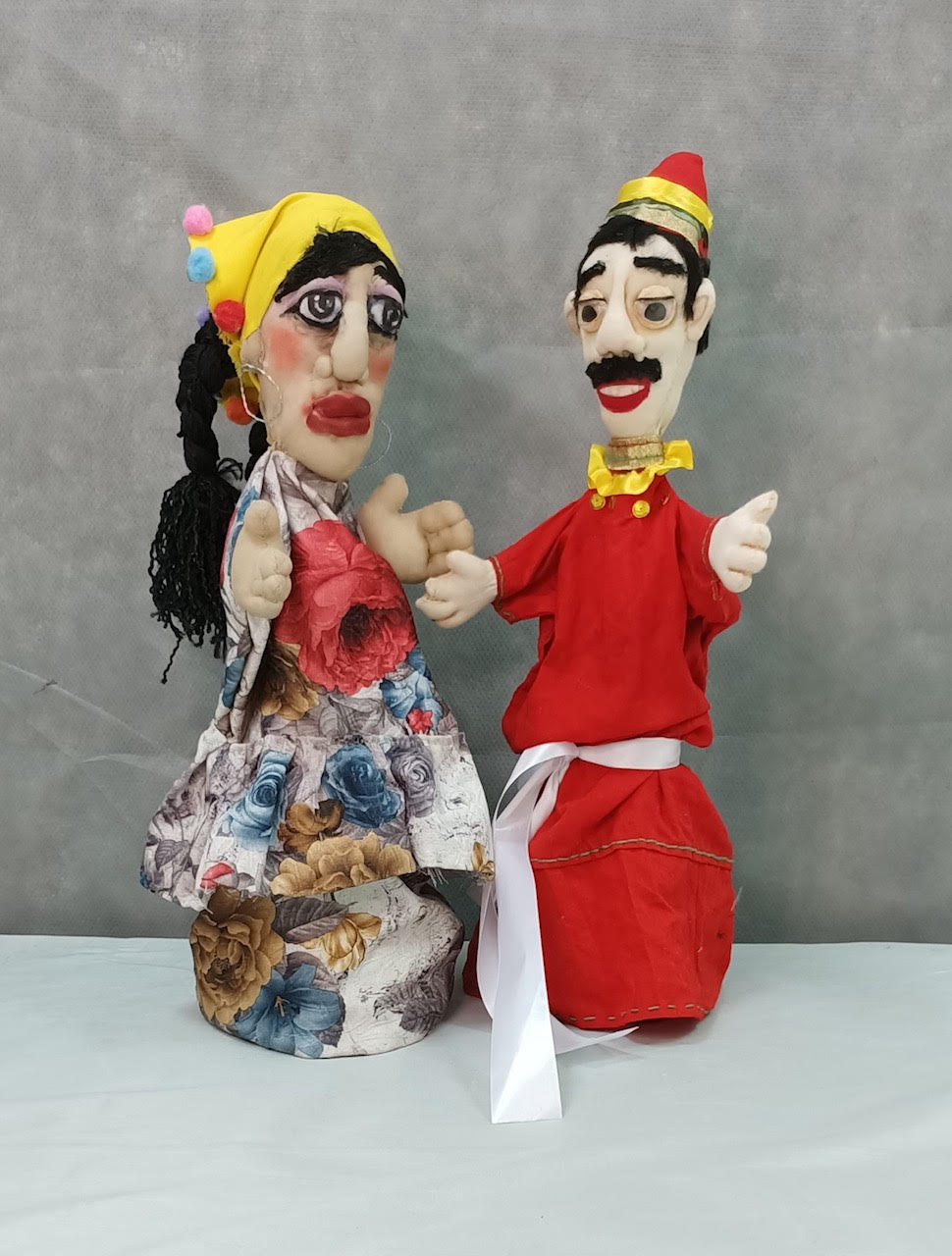 The main concern of another student, Rehab Mustafa, was the typical Egyptian character and traits. “I meant to utilise materials that would allow me to form different facial expressions in detail. It was difficult at first, but training helped me to freely re-shape the features of characters,” Mustafa proudly said.

For his part, Seif Ahmad said: “One of the success secrets was what we learnt from Dr Ali who gave us the opportunity of gaining experience by practicing, experimenting, having fun, and by continuous training.” This, he insisted, made a big difference between their first attempt at making puppets and the final one they produced. 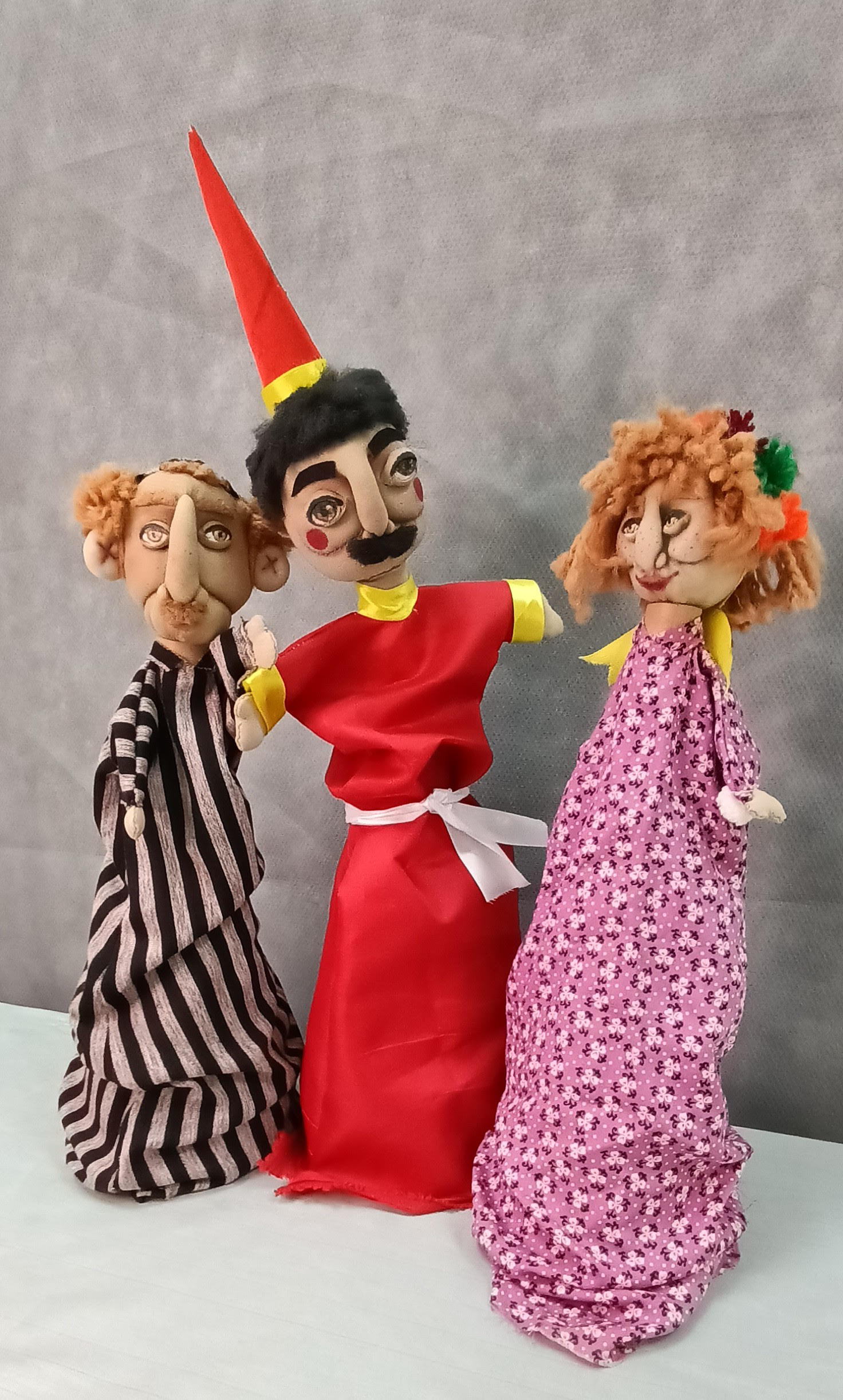 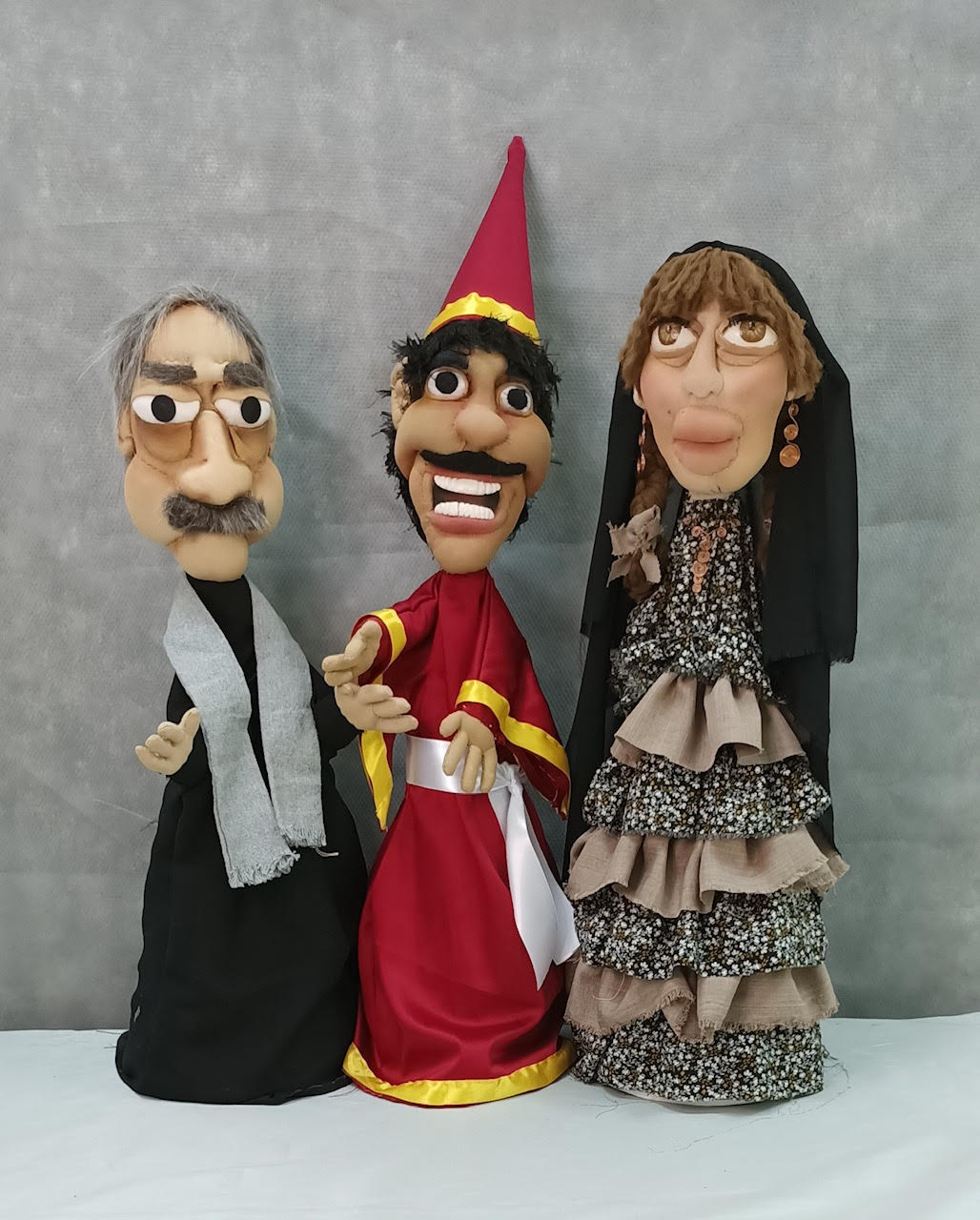 Radwa Adel could not agree more with Ahmad. She said that she learned to make puppets in so many ways through a lot of practice, free self-expression, and persistent problem solving. “No surprise then,” she said, “that the final product was so much more advanced than the first puppet produced.” 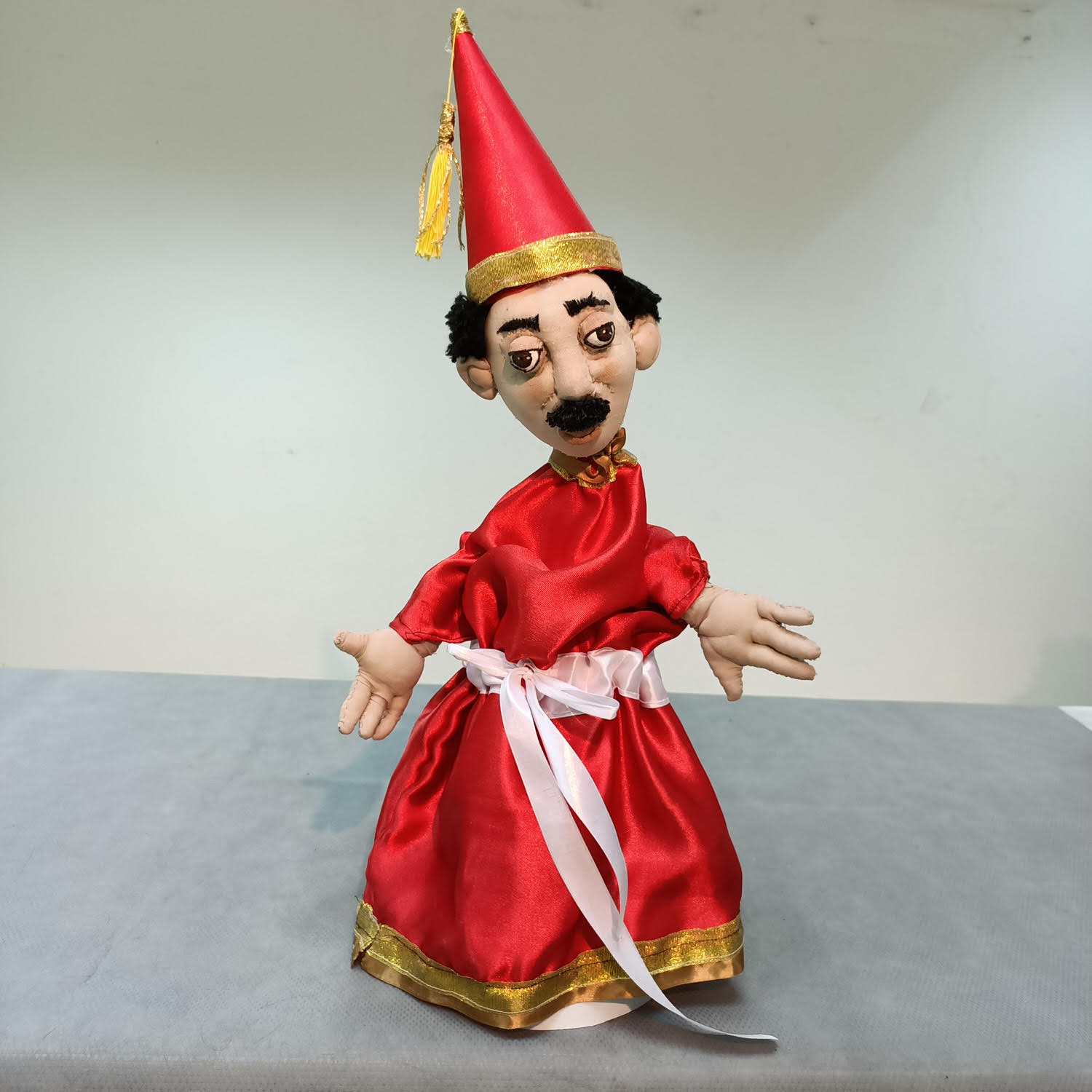 Ruqaya Muhammad, however, who holds a diploma in art education, did not suffice with a puppet or even a few puppets. Focusing on marionettes, she said it took her a long time and huge dedication and effort to master the specific facial and body features of the marionette characters she created. But once she did, she ended up producing a large marionette family of 19 miniature members.