It was the stuff legends are made of. With its impressive Hindu-style building and intricate ornamentation, embellished tower, battered windows and door, and the derelict grounds that must have once been a splendid garden, it was easy to believe the Baron Empain’s Palace in the Cairo eastern suburb of Heliopolis to be a refuge for ghosts. It was the subject of countless rumours, reportedly more than any other monument in Egypt. Late at night, passers-by would swear they heard the sound of moving furniture, saw lights go on and off, windows open and close at will, and smoke come out of the main room. For decades on end, Cairenes would drive or walk past it and wonder. All that beauty and all that dread!

Now, the early 20th-century iconic palace has been fully restored and its garden replanted, making a truly magnificent site. It opened its doors to the public on 30 June 2020, having been officially opened a day earlier by President Abdel-Fattah al-Sisi. The President was treated to a documentary on the history of Heliopolis, the palace and phases of its restoration. The palace showcases an exhibition of “Heliopolis, City of the Sun”; prominent is an outdoor exhibit of an original Heliopolis tramcar.

Rising from the desert sand

The name of Baron Edouard Louis Joseph Empain (1852 – 1929) is closely linked not only to the palace he built, but to the thriving Cairo suburb of Heliopolis.

It looks like the Baron might have been reading into the future when, at the outset of the 20th century, he thought of transforming a barren area 10 kilometres to the northeast of Cairo’s centre into a lively residential district. With the city becoming increasingly cramped for its inhabitants, the idea was to establish a pleasant suburb.

Baron Empain was a Belgian engineer of modest origin who elevated himself in the social hierarchy to become a baron under King Leopold II in 1907. In 1881 he was obsessed with electric transport, and within 10 years had constructed tramways in many European cities and expanded his activities into Egypt, Russia, and China.

A banker and industrialist, he raised an enormous sum of money from across Europe and filed a request to the Egyptian government for a franchise for a new suburb which he called Heliopolis after the ancient Egyptian city that once stood nearby; Cairenes however fondly called it Masr al-Gadida, literal for New Cairo. In 1878, he bought 5,952 feddans in the desert at the price of one Egyptian Pound per feddan with Nubar Pasha, the first prime minister of modern Egypt.

To build a new city that combined the traditional architectural styles of the country with modern construction techniques, he had the help of European and Egyptian architects and engineers. 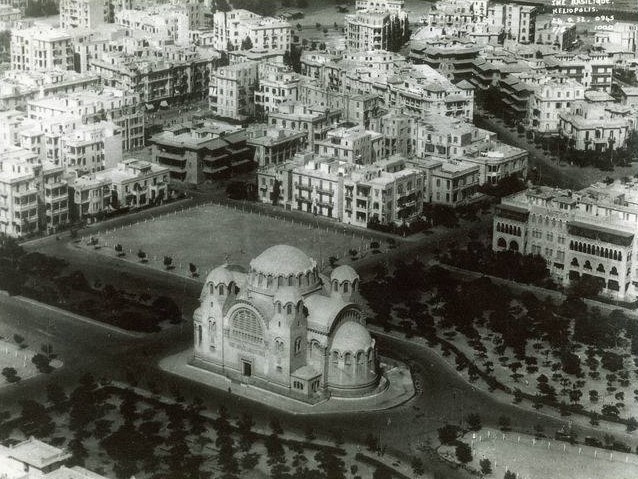 Heliopolis, an oasis in the desert, rose from the sand in May 1905.

Within a few years, Heliopolis was full of life. Its palaces and villas were unrivalled, and it was linked to the centre of Cairo via a metropolitan tramline. 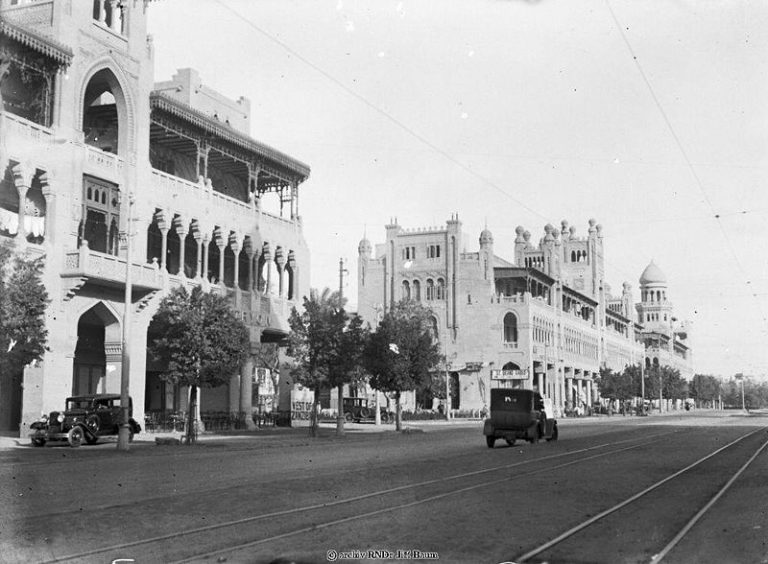 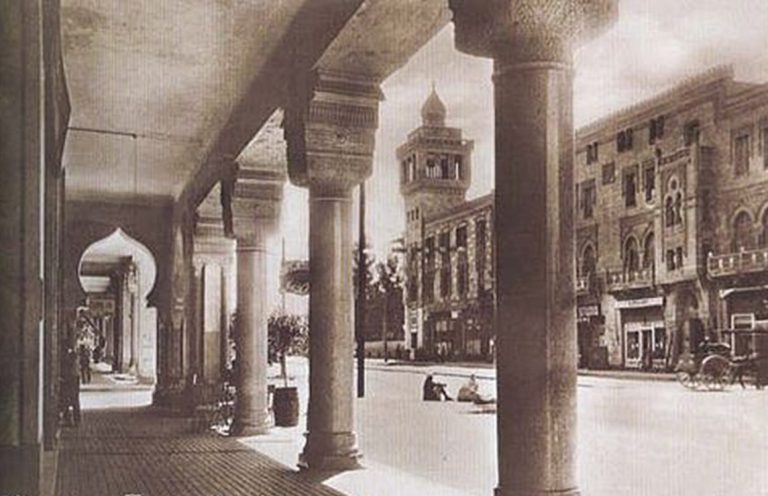 The tramway, the fastest public transport of the day, extended over 15 kms to Cairo, and could make the journey in less than 15 minutes. It was finished in 1910, making Heliopolis an accessible self-contained residential area complete with long avenues that offered wide perspectives and promenades. Other tramways interconnected the various parts of Heliopolis, becoming a time-honoured landmark of the suburb till population and urban expansion forced its dismantling in 2016.

Empain equipped Heliopolis with the necessary infrastructure and services and a racetrack—the famous hippodrome, now incorporated into al-Hegaz Street and the Merryland entertainment park. Only a small remnant of the original hippodrome survives in al-Hegaz Street.

Besides the hippodrome there were the Luna-park, various markets and a number of cinemas. At the time these were a new entertainment invention and were quite a hit in the new city. At one point a metro ticket allowed free entry to a cinema theatre.

An important landmark was the Heliopolis Palace Hotel, famous for its 500-sq.-m. ballroom topped by a 35-metre dome, 54,000 sq.m. of gardens and its 300 rooms, most of which were suites. The main part of the hotel was built of reinforced concrete, a new invention. The hotel remained the largest in the world until the 1930s, when large-scale hotels began to appear in Europe and the United States. Opened in 1910, it was used as a military hospital during the two World Wars. Today it is the presidential palace.

The religious edifices of Heliopolis were the focus of Empain’s dream. The Catholic church, the ‘Basilica’, was completed in 1913, designed by Alexandre Marcel, a French architect practising in Egypt at the time; it still stands proudly overlooking a spacious leafy turnaround on al-Ahram Street. Empain dedicated the church to Notre Dame de Tongres, naming it after a small church in Belgium where he used to be an altar boy. He had asked Marcel to create another Aya Sophia of Istanbul; the result offered a resemblance to the Turkish building, but the reduction of scale to the fourth degree changed the perception of the overall proportions. The basilica was designed without a bell tower, as it was Empain’s wish to bring silence to the residents of the new suburb as opposed to the noise and crowds of Cairo.

The Basilica is without doubt Heliopolis’s most famous church, but it was not the first. Two years earlier, Habib Ayrout, Empain’s famous contractor, had constructed a church for his Greek Catholic community. The two churches were followed by others such as the Maronite, the Armenian, the Coptic and the Greek Orthodox churches. Sultana Malak who lived in a palace built for her in front of the Baron’s château by Sultan Hussein Kamal, ruler of Egypt from 1914 to 1917, ordered the construction of a mosque across from her own palace in memory of her husband. In the following years many other mosques were built.

The Baron died in Europe, but was granted his wish to be buried in the Basilica he built in Heliopolis. The remains of both him and his son rest under its marble floor.

Heliopolis was conceived without urbanists; yet it constitutes a very well defined urban ensemble with its mix of Arab, Moorish, Neo-Islamic, Art Nouveau, and Art Deco architectural styles. It became an experimental field for European architects expounding idealistic and utopian concepts. French architect Alexandre Marcel did not hesitate to experiment with Hindu architecture in building the Baron’s palace, nor Ernest Jaspar to attempt Moorish details in the design of the Sacré Cœur school not far from the Basilica. 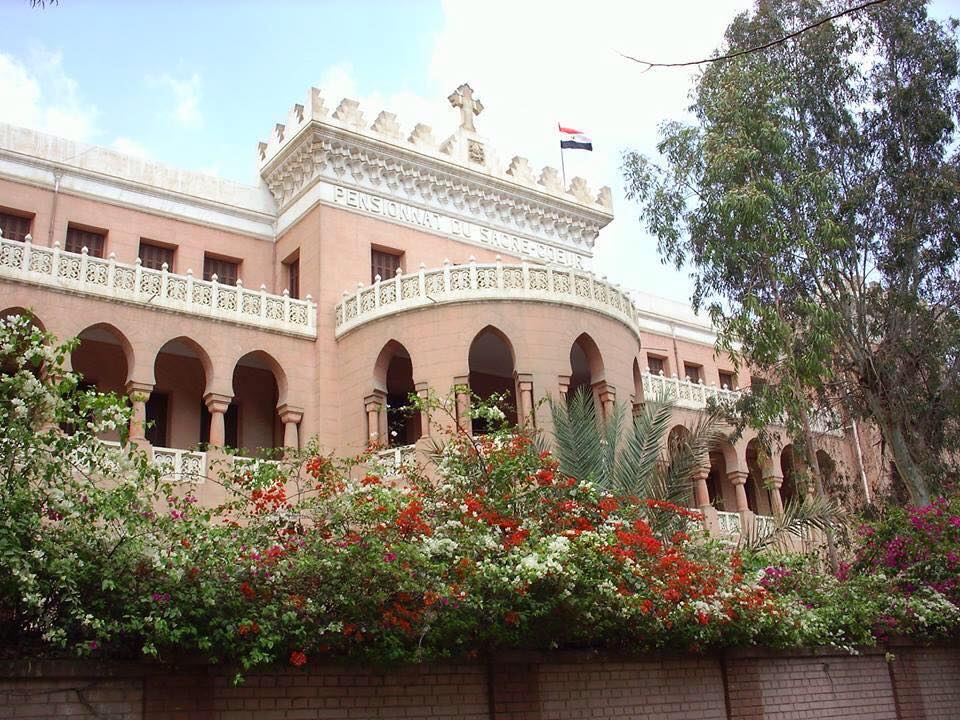 Baron Empain built his own extravagant house, commissioning the French architect Alexander Marcel to design the château. Marcel designed a grande folie according to two different architectural styles; the outer statues and the fence belonging to Renaissance style, and the château, with a high dome decorated with statues of the Buddha, belonging to the Cambodian style. The elaborate interior was the responsibility of Marcel’s French associate, Georges-Louis Claude. 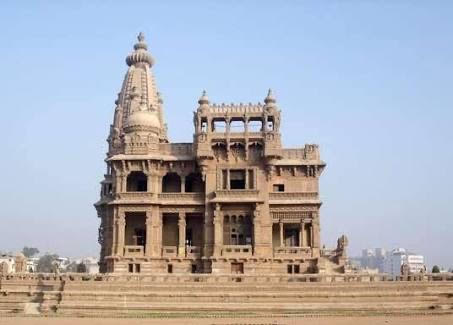 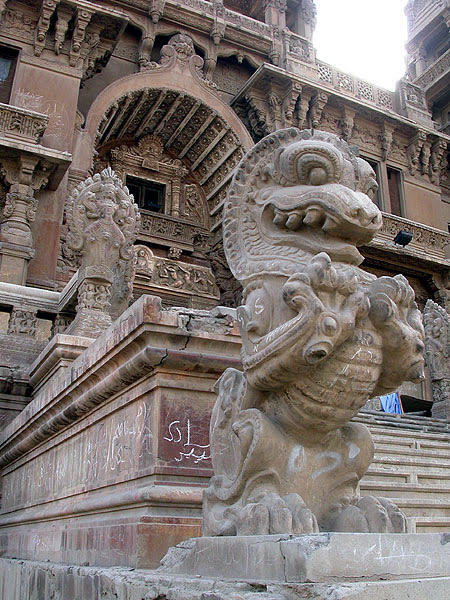 On opening day Empain invited Sultan Hussein Kamal, who was amazed on climbing the tower to have a view of all of Cairo as far as the Giza Pyramids. Sultan Hussein asked the Baron to give him the palace, but the Baron politely refused.

The unique features of the Baron’s château include a tower built on a turnstile fixed on a base that rotates by the hour so that it follows the direction of the sun, moving from east to west. In theory, one can sit in the tower enjoying a changing view without moving. 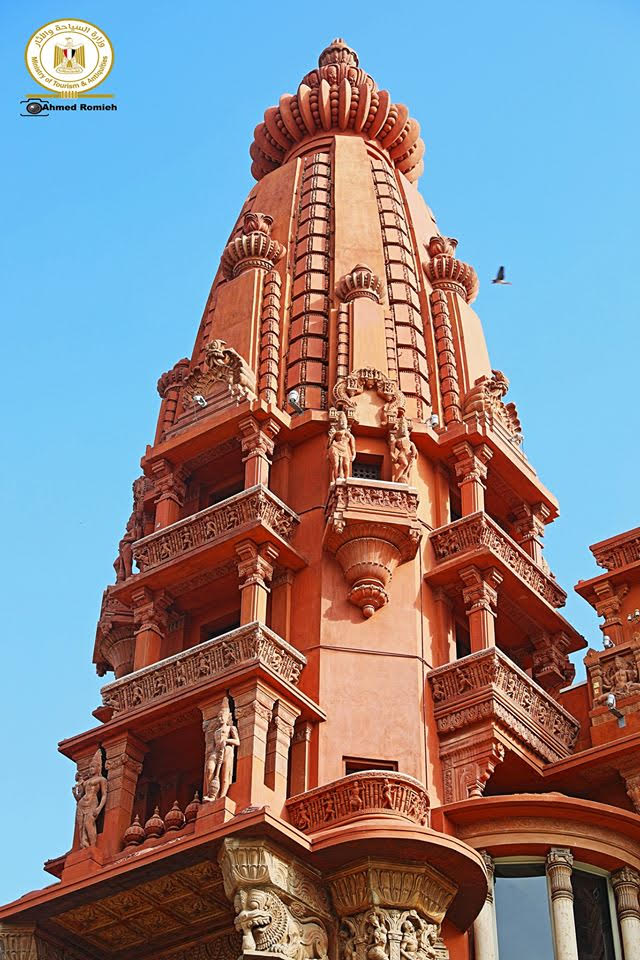 The château and its garden occupy spacious grounds, but the château itself is small and consists of only two floors and a basement. The basement contains a servant’s room, an enormous furnace, marble wash tubs and an elevator made of nutmeg wood that connects the basement to the first floor. On the first floor is the dining room with its walls ornamented with copies of paintings by Michelangelo, Leonardo Da Vinci and Rembrandt.

An elevator ornamented with small Hindu statues takes one to the second floor, which contains several bedrooms each with its own bathroom walled with mosaic tiles.  Another elevator of fine tulipwood leads to the roof, where Baron Empain held parties. 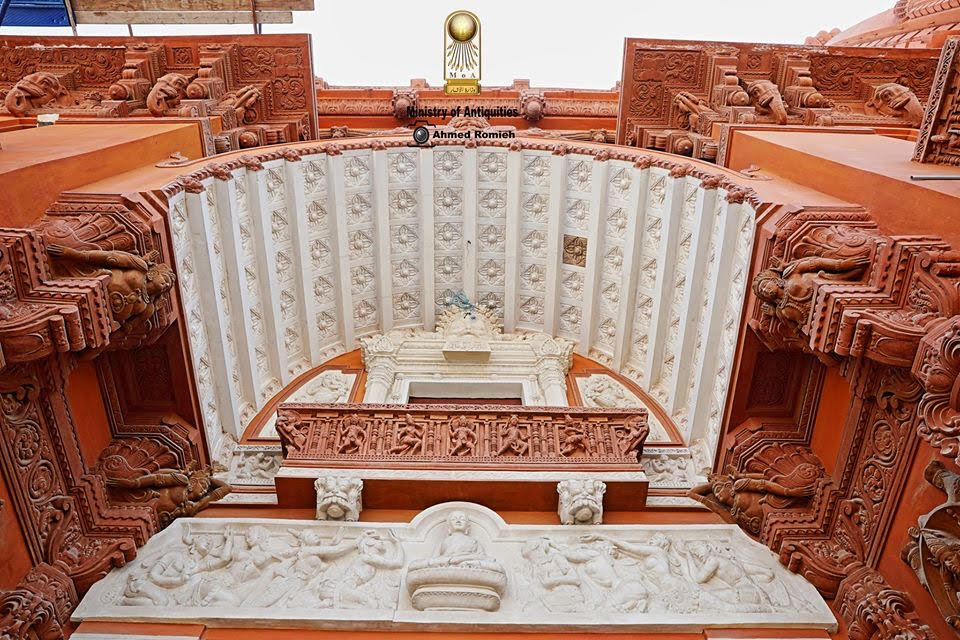 Some of the château’s statues and antiques are gilded with gold and platinum, as are the statues of Buddha and legendary dragons.

Baron Empain died in 1929, and at that point the château’s spark was extinguished. Undervalued and underappreciated, it was left to careless neglect. It gradually turned into a ghost house surrounded with mysterious legends. As usual in such cases, there is some fact behind the legends.

First, there was a room in the château the Baron prevented anyone from entering, even his daughter and his sister. This room was in the basement and is the same room that leads to a tunnel connecting the château with the nearby Basilica. 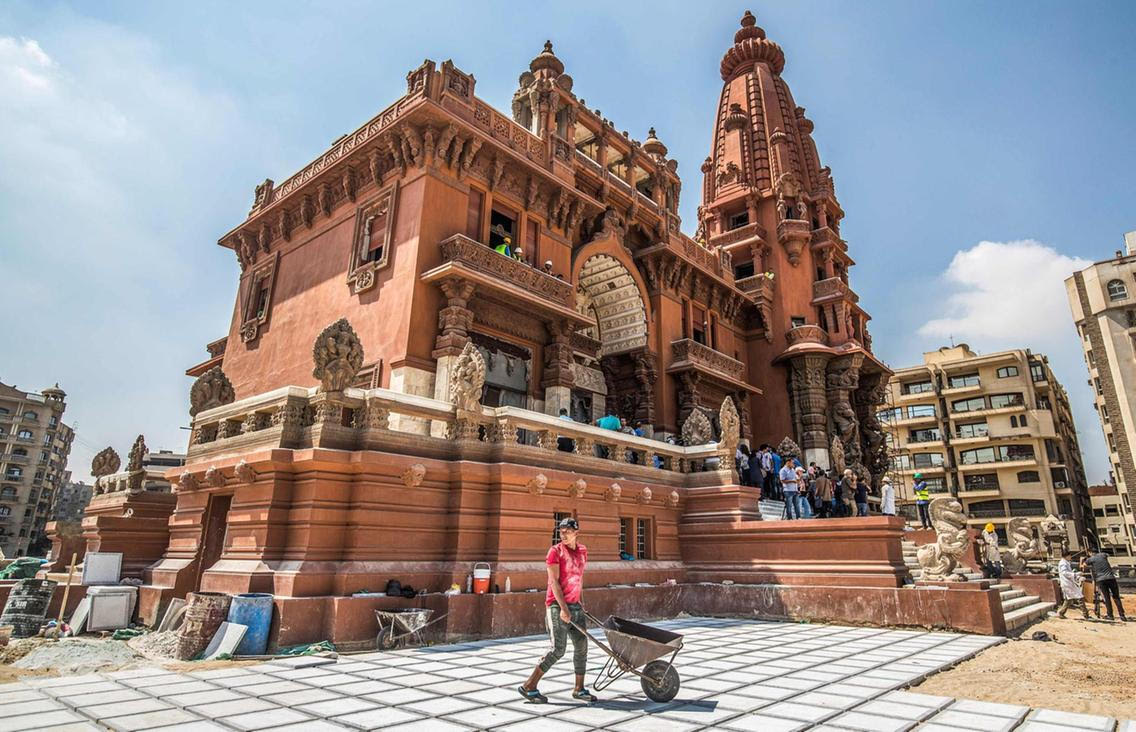 Third, the Baron’s daughter caught polio, but rather than sympathise he treated her so cruelly that she suffered from depression and was confined to a basement room, from where she eventually emerged feeling refreshed and in a better mood. Then she was found dead under the elevator, with no one knowing why.

The event that, for the locals at any rate, affirmed the ghost rumours was the mirror in the tulipwood bedroom that, after the death of the Baron, turned red in colour and, according to the person who found it, the red substance was blood.

In 1993, the Supreme Council of Antiquities (SCA) listed the Baron Empain’s palace as a monument. Despite the fact that it was relatively in its youth, not yet 100 years old, it was in a deplorable condition. The listing placed it under the protection of monuments law of 1983. 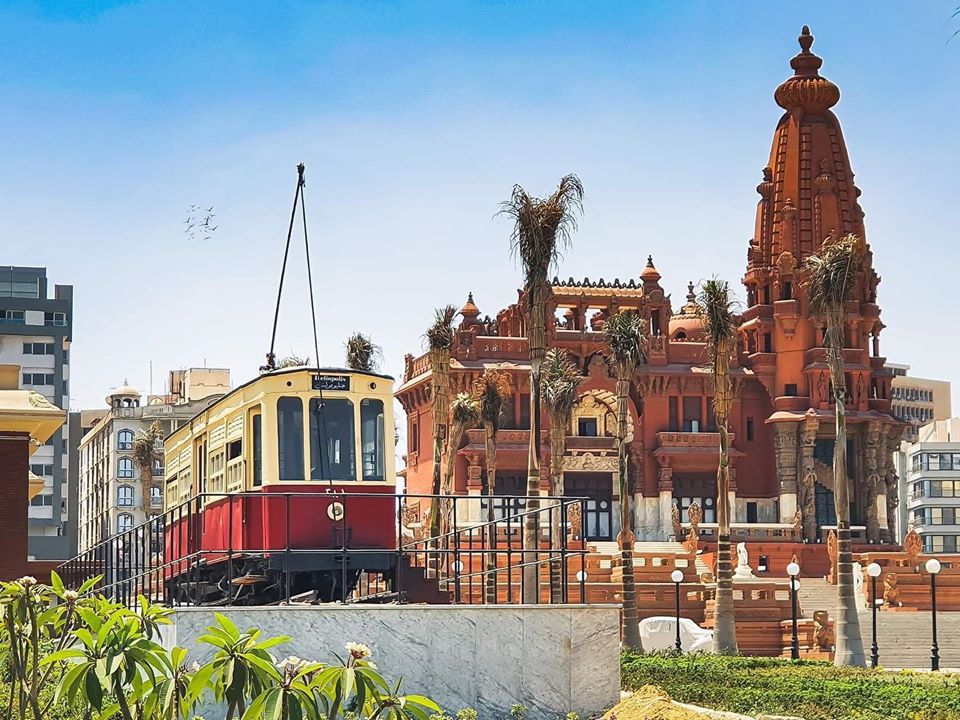 Following the recent opening of the fully restored palace and its gardens, Egypt’s Tourism and Antiquities Ministry urged all visitors to commit to the health cautionary procedures on account of COVID-19. Until mid-July, visiting hours are from 9am to 6pm, with a maximum 10 visitors allowed in each hall at any one time, and 15 visitors allowed on the palace roof. The numbers will be reviewed after mid-July, in accordance with the rise or fall of COVID-19 cases.

Since it opened to the public, there has been such a high visitor turnout that tickets were sold out.

The Ministry of Tourism and Antiquities has published a pamphlet in the Arabic and English languages under the title of The Story of Masr al-Gedida (Heliopolis). 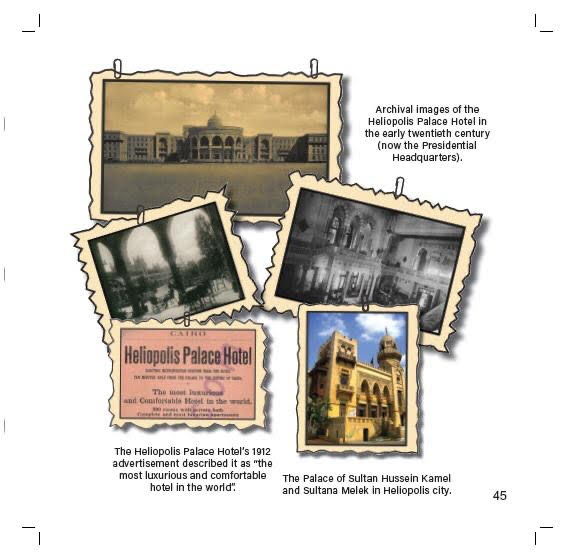 According to Dr Nevine Nizar, an aide to the antiquities minister for museum affairs, the pamphlet is divided into two parts: the first includes historical events and interviews among the main characters who founded Heliopolis, whereas the second gives new information and unknown facts about the Baron’s palace and the city’s history.

“The pamphlet targets different ages,” Dr Nizar noted, “and does not aim only at narrating the history of Heliopolis, but rather accompanying visitors on a journey through the time to get to know more about the pioneers of architecture and arts who had built a unique urban city.”

Edited in an attractive and modern layout, the pamphlet offers information in a simple way through illustrations, archival photos and imaginative scenes among the story’s characters. 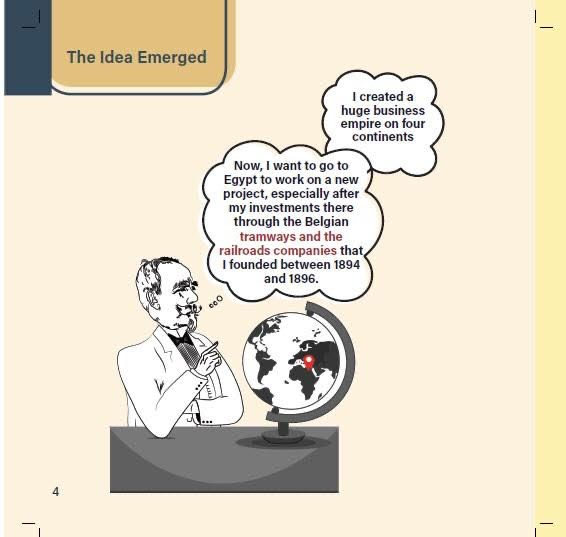 With the aim of attracting children, a colouring booklet was attached to the pamphlet. It targets ages from 6 to 9, and includes activities such as puzzles and colouring.

According to Rasha Kamal, General Manager of the Administration of Cultural Development and Social Communication, the booklet is classified as a ‘pre-visit’ book. It creates a sense of excitement and curiosity before visiting the palace. Precisely the traits needed to approach such a magnificent monument!