Downtown Cairo will always hold a special place in the hearts of those who frequented it or grew up there before and during the 1960s. Back then, within the aura of its charming, majestic buildings, the area was the epitome of elegance. It boasted tree lined streets, wide pavements, world class shops, and buildings with facades of ornate Neo Baroque or Art Nouveau decorative elements. Inside, the buildings were airy and full of light, graced with wide entrances, marble stairways with glistening iron and wooden balustrades, glass and wood lifts, and flats with spacious rooms and lofty ceilings.

Today, however, that old-time grandeur is nothing but a lasting, incomparable memory which younger generations cannot fathom. Now the streets are overcrowded, the shops mostly mediocre, and the buildings dilapidated. Altogether, an air of drabness, grimness, and crowdedness prevails, giving a sense of a place that had seen better days. 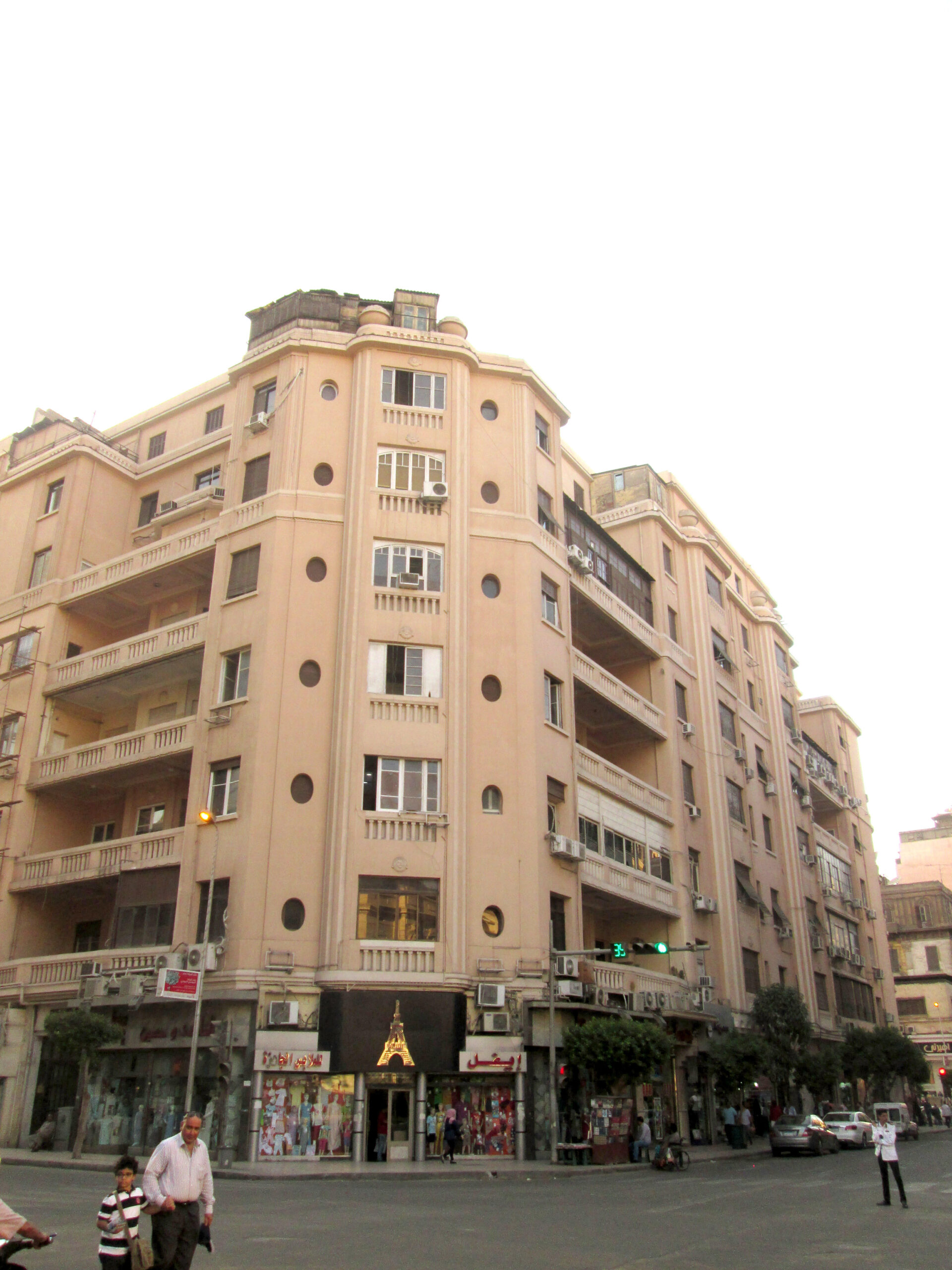 The Downtown area of Cairo was designed by prestigious French city planners and architects commissioned by Egypt’s ruler Khedive Ismail (1830 – 1895) to be a modern capital fit to compete with Paris for beauty. It was developed between 1860 and 1940 in a unique architectural style of buildings combining European and local influences. Post-1940 buildings were built in the international modern style; the architectural product of the previous era (1860-1940) was never equalled. 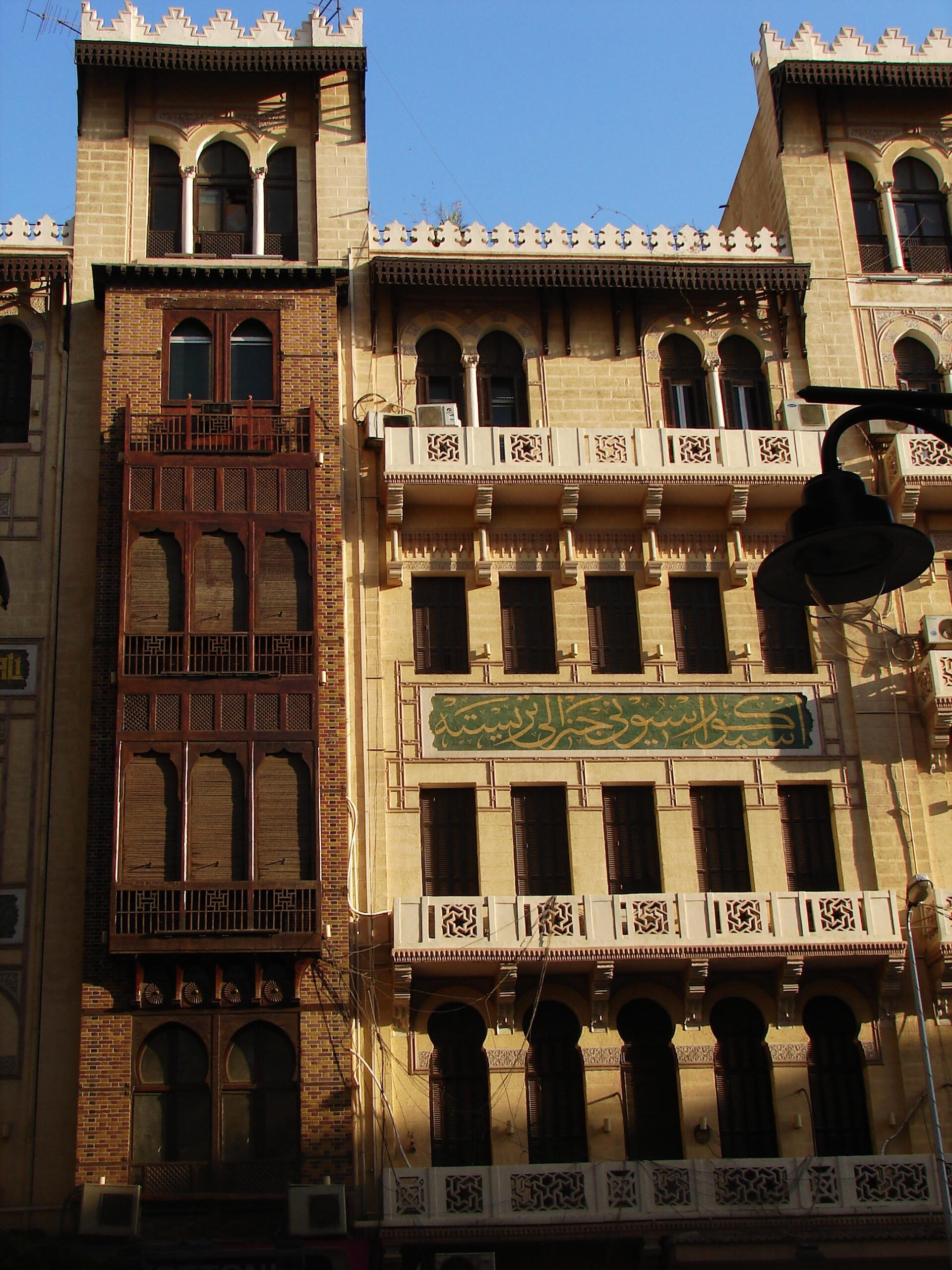 In the 1960s, Egypt went through a socialist era which, among other measures that curtailed private ownership, cut down rental values and immortalised rental contracts. This had a devastating effect on Egypt’s buildings which no longer generated revenue that owners could invest in maintaining them. Neither did the tenants undertake this responsibility; no law obliged them to do so. As other old buildings in Egypt, those in Cairo’s Downtown suffered tremendously on account of some six decades of gross neglect.

The question that today begs an answer is whether anything can be done to restore Downtown Cairo’s glorious buildings. Those who see the vestige of this majestic heritage still breathing beneath the degradation have their eyes longingly turned to the government.

Only so much the government can do

In fact, the government is already on a project to revive Downtown Cairo. It started by banning parking in all the main streets, and moving to a new location the street vendors whose wares had for years choked the pavements. It also undertook the task of restoring the facades of the remarkable buildings on the main streets. In cooperation with the Ministry of Antiquities, the statues that adorn the main squares were restored and polished. But there is only so much to what the government can do; it cannot finance the maintenance of privately owned buildings. 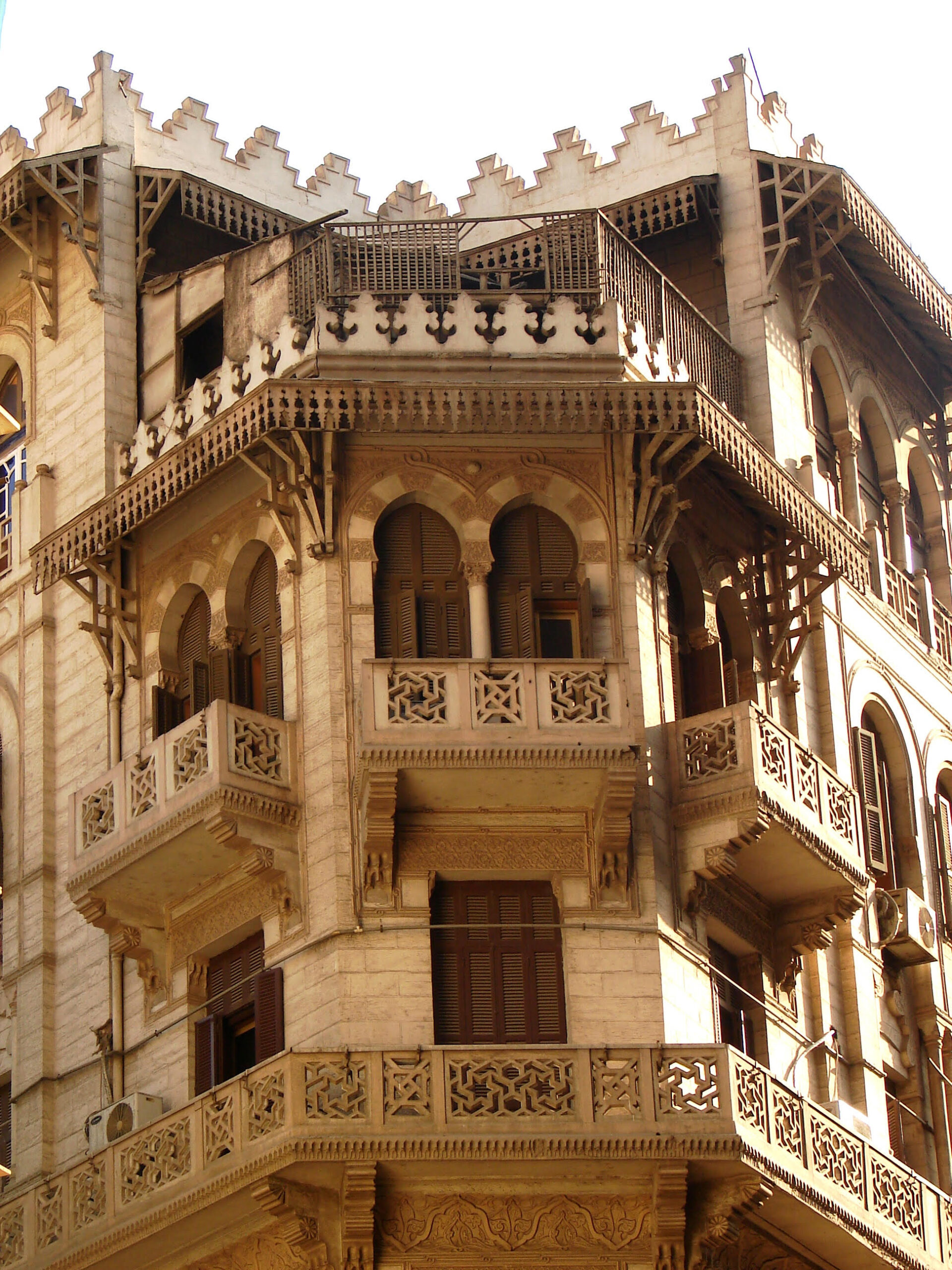 The root problem is that the landlords of the Downtown Cairo buildings receive meagre rent for their property, too little to cover any maintenance costs. With the deteriorating conditions of the neighbourhood and buildings, most tenants have moved out into modern suburbs, but they still keep their old flats which cost them next to nothing. Many have conveniently sublet their units to artisanal ateliers, and neither the original tenants nor the subtenants are interested in incurring the costs of maintenance, especially that they are not bound by any law to do so. Landlords have no power to terminate the contracts, and cannot afford the hefty maintenance costs of the buildings.

Soheir Hawwas, Professor of Architecture and Urban Design at Cairo University, is famous for her research on Downtown Cairo. Dr Hawwas believes that the only answer to preserve and maintain the Downtown buildings is to create residents unions. These are bodies that would include the residents occupying a given building, who would pay a yearly sum for maintenance. The government, Dr Hawwas says, should create an administrative authority that would oversee the formation of small size companies to cater for the maintenance needs of the old buildings. These companies should ensure that each building abides by a strict regular maintenance schedule.

The maintenance task is a large, varied one, according to Dr Hawwas. Major among the problems, she explains, is the dilapidated condition of the sanitary drainage systems, since leaking water is ruinous to all other elements in a building, thus fixing or renovating drainage systems should be a priority issue. There are also the lifts, inner courtyards, and the roofs to consider. The large Downtown buildings were known for their spacious inner courtyards that served to allow daylight and fresh air into the apartments. They were also famous for their rooftops which were originally designed to house the helping staff of the residents. With time and lack of care, the inner courtyards were turned into garbage dumps, and the rooms on the rooftops were let to underprivileged tenants who did not mind crowding in a single room and using a common bathroom.

As though the run down state of the buildings were not enough, Dr Hawwas says, some tenants venture on renovation or expansion works that jeopardize the safety of the building without approval from local building authorities. If there were residents unions, she says, this would never be allowed.

No financing through public funds

Another person with keen interest in the Cairo Downtown area is Riham Arram, Head of Heritage Preservation at Cairo Governorate. Dr Arram says it is not possible for the government to undertake the interior maintenance of buildings. The State cannot finance the maintenance of privately owned buildings through public funds, she says. “The State is only responsible for restoring the buildings on the outside, to boost their real estate value and of the entire area,” Dr Arram says. “This is especially significant given the depreciation of the buildings on account of weathering and the pollution caused by vehicle exhaust,” she explains.

“If we are serious about preserving the Downtown heritage, we must all realise its worth, and everyone is invited to help,” Dr Arram says. “Residents unions are strongly called upon to maintain and renovate the interior of buildings.” A 2008 law allows resident unions, but does not mandate them. She lamented the fact that it is the tenants themselves who resist forming residents unions; no amount of pushing or persuasion gets them to oblige. She believes new legislation is needed to address rents and usage of residential units, also to make residents unions mandatory.

Dr Arram says that Cairo governorate for its part works against violation of the buildings.

Most building violations, Dr Arram says, were done by the tenants who use their flats as artisanal ateliers; they rented them in the first place because of the low rent, and are not willing to pay anything for maintenance. Their absolute indifference to, or possibly ignorance of the threat their violations pose to the building has led to numerous fires.

“Now,” Dr Arram says, “the law allows eviction of these ateliers.” Once vacant, the flats are returned to the landlords. So far, she says, 400 flats were vacated, and 1500 unlicensed advertisement banners that tarnished the facades of the buildings were removed. 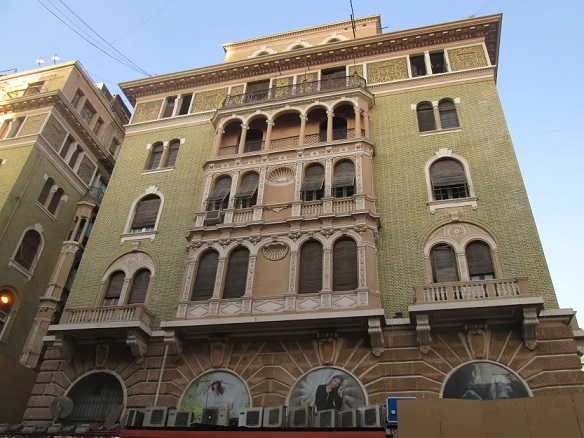 Dr Hawwas calls for Downtown Cairo to be handled as an open museum for its priceless wealth of buildings. She suggests a State fund be formed to finance their restoration, as with restoring antiquities. A board should properly manage this fund, and should undertake the responsibility of making people aware of the value of the Downtown real estate wealth; this should work to motivate landlords to preserve their buildings, especially if the board works to exempt these buildings of the real estate tax and, more importantly, to urge parliament to pass a law to unfreeze rental values. 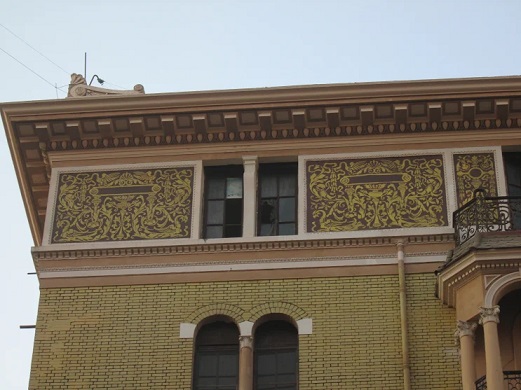 According to Dr Arram, Downtown Cairo boasts 1500 buildings, 500 of which are listed as buildings of distinctive architectural character.

“The difference between buildings of distinctive architectural character and buildings listed as heritage,” she says, “is that the latter are under State ownership whereas the former remain in the custody of their private owners who are under the obligation of preserving them. Cairo governorate does not own any of the buildings; it just renovates the facades. The governorate does not have the authority to oversee the internal maintenance of buildings. Landlords should respect rules and regulations set by the local authorities before they venture on any work.

Dr Muhammed Abu-Seada, Head of the National Urban Harmony Organization (NUHO) explains that buildings listed as heritage are categorised in different levels. Level A, he explains, should be completely preserved and restored inside out. Level B building facades are restored, but the interior may be used for purposes other than the original. Level C allows demolition of the interior while preserving the facade. The famous High Court building of Downtown Cairo, for instance, belongs to level A buildings.

Not all owners of Cairo’s Downtown buildings are individuals; many buildings are owned by large public companies. The public sector company Misr Real Estates Assets (MREA) owns 127 buildings in Downtown Cairo, which are listed as heritage sites or buildings with distinctive architectural character. MREA has been involved in the management of these buildings since the 1960s.

MREA is contributing to the project to revive Downtown Cairo, the company’s Acting CEO Muhammed Galal says. Mr Galal says the company works within a timeframe set by a specialised technical and administrative committee to maintain and restore the buildings it owns. In 2019, he says, the company restored the facades of a number of its buildings in Khedival Cairo; its work now extends to those on the main streets and squares of Talaat Harb, Mustafa Kamel Sq., and Qasr al-Nil St. He says MREA works closely with the local government which is putting in a lot of effort to regain the lost charm of Downtown Cairo.

Dr Arram explains that a plan is in place to save the endangered heritage buildings in parallel with a presidential project launched last August to revive Downtown Cairo. The government, she says, is especially keen to revive the Downtown and highlight its cultural and touristic potential as well as the investment opportunities it offers. Now that Egypt is getting its New Administrative Capital, she says, the government is eager for Cairo, the “old capital”, to retain its value. Cairo governorate is working with UN-Habitat to develop Downtown Cairo squares and streets, and to allocate special lanes for bicycles, a project carried out in coordination with the Cairo traffic department.

The development project Dr Arram explains, runs in phases. “In 2017, we started by scrubbing and polishing the statues which stand in the squares of Downtown Cairo. This phase was carried out in cooperation with the ministries of antiquities and culture. Currently, we are focusing on restoring the facades of the buildings and revamping the squares. Later we will focus on traffic and creating pedestrians’ areas.” 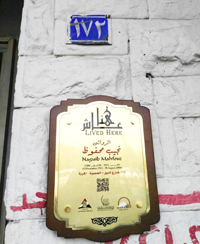 The National Urban Harmony Organization has also had an input in the revival of Downtown Cairo project, among which the “[He or she] lived here” project. The idea is to place brass signboards that indicate specific places in Downtown Cairo and other old neighbourhoods, where famous public figures used to live. A QR code readable by mobile phones figures on the signboards to offer passers-by more in depth information about the history of the public figure who “lived here”. Dr Abu-Seada says that so far, 400 signboards were placed in various spots in Egypt. The project is ongoing, he says; the aim is to place 100 signboards every year.

“We are striving to preserve this memory for generations to come,” Dr Abu Seada said.

Some three generations have already missed out on the glory that was Downtown Cairo. Will the effort exerted now revive that magnificence and charm for future generations to bask in? 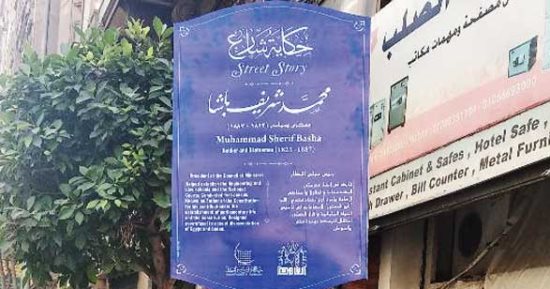 For detailed reporting on the predicament of Downtown Cairo: