Tahrir Square in central Cairo is the oldest in modern Cairo, and the widest. The 19th century Square was superbly designed with a number of main streets branching out of it, lined with splendid buildings, to meet smaller squares and intersecting roads ahead. Together, they form the famous Downtown Cairo area, also known as Khedivial Cairo.

For decades, Tahrir Square has been a focal point of changes in Egypt, political and social, and has featured in numerous historic, literary, and artistic works. 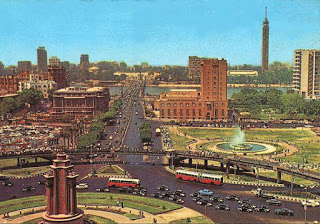 Going back in history to ancient times, the area which is today Tahrir Square was a deserted wilderness of 500 feddans—1 feddan is 4,200 square metres—and remained so until the 10th century when the Fatimids (973 – 1171) made Cairo their capital in 969. To build their city, they diverted the course of the Nile, which resulted in shrinking the desolate area of land and turning it into wetlands that were inundated with water every summer when the Nile flooded. It remained so for eight centuries, till Napoleon Bonaparte invaded Egypt in 1798. The French army camped on that area on the Nile bank in the vicinity of Cairo till they had to leave Egypt altogether in 1801 upon their defeat at the hands of British and Ottoman forces. The area turned into a rubbish dump till 1850 when it was reclaimed to cultivate crops and trees.

Paris on the Nile

In 1863, Khedive Ismail Pasha (1830 – 1895) became monarch of Egypt until 1879. He had been educated in Paris, and held the city in very high regard. He wished to modernise his capital, Cairo, a thriving densely crowded medieval city, into a Paris-on-the-Nile that would be ready to receive guests for what he planned to be a spectacular opening of the Suez Canal in 1869. He desired his new capital to be modelled after Baron Haussmann’s Paris: to centre around a square like the Place de L’Étoile, today Place Charles de Gaulle, with large straight avenues branching out. The Khedive commissioned his Minister of Public Works, Ali Mubarak, with the task.

Mubarak could see the impossibility of turning Cairo, with its narrow streets and crowded neighbourhoods, into a modern city; he thus decided to build a new one next to it instead. The area that stretched west of the city to the Nile bank was ideal for the purpose.

To build the new Cairo, Mubarak brought in French and Italian architects, among them Jean-Pierre Barillet-Deschamps, the landscape architect who designed Champs de Mars and Bois de Boulogne in Paris. As the roads and infrastructure were set up, plots of land were given free of charge to whoever would pledge to build a house and garden at a cost no less than EGP2000, a princely sum then, in some 18 months. As described by Mohamed Abdel Salam in Egyptian Geographic: “The European Cairo witnessed many architectural styles … by French, Italian, German and Egyptian architects … leading to an eclectic architectural scene that boasted the neo-classic, baroque, rococo, renaissance and of course Egyptian motifs and gures, thus starting a belle époque era that lasted for almost a century.”

The Square … and bridge

Central to the new Cairo was the square today known as Tahrir Square. Even though it had been intended to emulate the Place de L’Étoile, it did not turn out a replica of the Paris square. It is a much wider space from which main streets flow into Cairo north, south, and east, but which has the Nile bank as its western border.

The Square opened in 1865. It boasted a number of palaces owned by members of the royal family and the nobility, and later in 1902, the venerable Egyptian Museum at its northern part. Magnificent chateaux were also built on the roads leading to it; as well as hotels, inns, places of worship, and consulates.

Urban expansion extended to the wide Nile island of al-Gezira which lies across from the Square; it became a summer resort for Cairenes and included Sarai al-Gezira which was built in 1868 for the French Empress Eugenie to reside in during her visit to Egypt for the Suez Canal opening. The Sarai is today the Marriott Hotel in Gezira.

Khedive Ismail decided to build a bridge on the Nile to connect Cairo, at the point west of the Square, to Gezira. The bridge, which spanned 1932 metres, was built at the hefty cost of EGP108,000 and opened in 1872. At the time it was extremely impressive, the first metal modern bridge in Egypt and possibly Africa, so that the public named the Square after it: “Square of the Bridge”. The bridge was in 1933 replaced by today’s Qasr al-Nil Bridge which together with the Nile Corniche that opened in 1874 form major landmarks of modern Cairo.

In 1882, the British invaded Egypt. In Cairo, they garrisoned themselves in the Square, effectively blocking it to the public, and left only in 1947 after WWII had come to an end. The Square, slowly but surely, started gaining its present form.

The palaces built in the Square and the roads leading to it, today serve as public buildings.

Qasr al-Nil—Qasr is Arabic for palace— was built for Nazli Hanem, daughter of Muhammad Ali Pasha, and is today the Cabinet headquarters. The British Embassy is housed in what was once part of the palace of al-Walda Pasha, the Queen Mother. Qasr al-Mounira is today the administrative headquarters of French archaeological and cultural activities. The American University in Cairo was established in 1920 at what was once Qasr Ahmed Khairy Pasha. Qasr al-Amir Kamal Eddin Hussein housed Egypt’s Foreign Ministry, and Qasr Lazoghli became a school.

The name of the Square has changed over the years. Following its first name, Bridge Square, it was named Ismailiya Square which was changed to Khedive Ismail Square in 1930. Following the July 1952 Revolution that abolished the monarchy and turned Egypt into a republic in 1953, the name was changed to Tahrir, literary Liberation Square. Apart from symbolising the revolution, Tahrir was a name bestowed on the Square by the public during Egypt’s 1919 nationalist revolution against British authority on the country. That revolution witnessed the first ever women participation and activism in modern times; it was in Tahrir where women first publicly took off their veils in a gesture that heralded the movement of women’s rights.

The Square was renamed in 1981 the Square of Martyr Anwar al-Sadat, in the wake of the Islamist assassination of President Sadat for making peace with Israel. The name is till today the official name of the Square. The public, however, continued to refer to it only as Tahrir Square.

In recent years, Tahrir was the scene of the Arab Spring uprising in January and February 2011, which led to President Mubarak (1928 – 2020) stepping down and the Muslim Brothers rising to power. Two years later, it was the spot on which millions of Egyptians converged, filling the streets from remote neighbourhoods and flowing into Tahrir.

In a strong sense, the Square has lived up to its name.