“Gallery of a group of artists and writers installed in a pretty villa surrounded by dense vegetation; the square [where the villa is located] alone is a delight to the eyes. This collective organises conferences, debates and screenings of films by international producers. On the exhibition side, the programming is very eclectic in the choice of genres and works of painting, sculpture or installation. The gallery is in perpetual movement so that we rediscover it at each visit. Without a doubt, it is a relevant place of culture.” As Watani embarked on a story on the famous L’Atelier D’Alexandrie (The Alexandria Atelier), it could find no finer description of the Atelier than the above, posted as an opinion on the travel guide site Petit Futé. 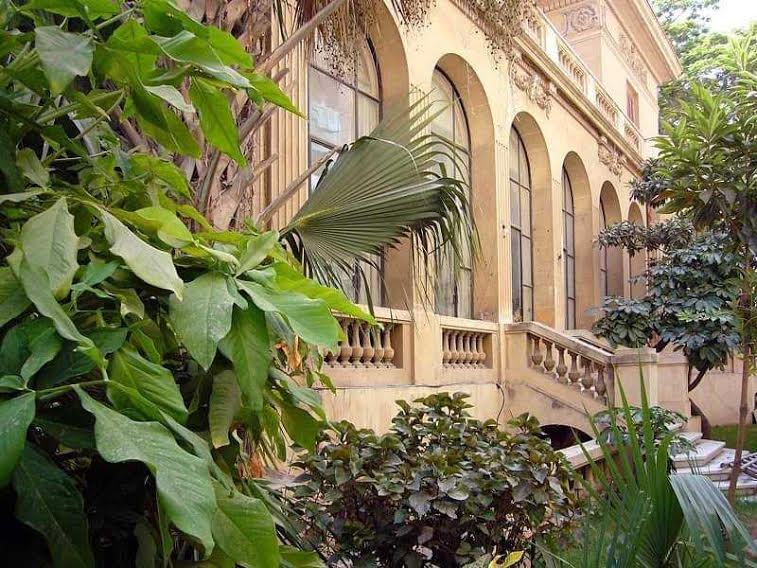 For 87 years, L’Atelier D’Alexandrie has been a name synonymous with culture and the fine arts. Housed in a magnificent turn-of-the century villa on Victor Bassili Street in the coastal city of Alexandria, the Atelier continues to be for Alexandrians a vital, active resource of culture and art, boasting among its sponsors and protégés figures through whom Egypt’s contemporary art movement was born and on whose shoulders its various schools flourished and thrived.

Not your regular tenant

The Alexandria Atelier recently commanded the attention of art and culture lovers, and the Egyptian public in general, but not for some unprecedented art activity. Sadly, it was because the villa that houses it and that is in itself a splendid artistic and architectural masterpiece became the focus of conflict over rent and ownership rights.

A court ruling issued on 27 January 2021 and confirmed on 6 May 2021 by an appeals court, judged that the rental relationship between the villa owners and the Atelier should be terminated. The tenants, the ruling declared, should leave the villa which would then be reclaimed by its owners. According to artists Samy Helmy and Maher Girgis, both on the board of the Atelier, the Appeals Court has not yet issued the legal reasoning behind its ruling; once this is issued the Atelier can take the case to the Court of Cassation, the highest court in Egypt. 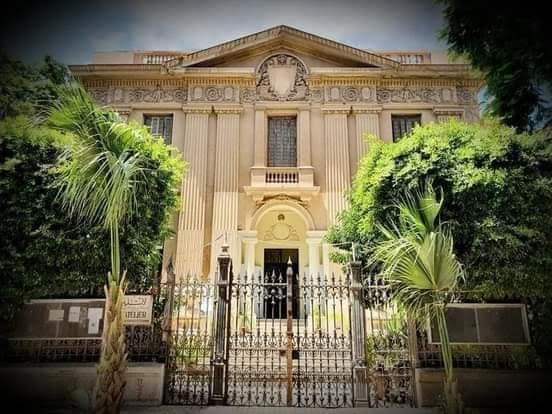 In the meantime, those in charge of the Atelier have been campaigning for what they say is their right to retain the rented villa on Victor Bassili Street in the Alexandria’s Latin Quarter as their premises. They are attempting to rally Egypt’s culture figures to come to the rescue of the “Pyramid of Alexandria”, also to create a sufficiently strong public opinion that would pressure authorities into allowing them to go on renting the villa. They claim that the court rulings have disregarded the exceptional nature of the tenants who shoulder a special responsibility in spreading culture, enlightenment, art and beauty, and have instead applied the law as to an ordinary owner-tenant dispute.

The villa that today houses the Alexandria Atelier was built in 1925 by Greek tycoon Nikola Tamvaco. It was later sold by Tamvaco to the Alexandrian Syrian wood merchant Edward Karam who commissioned all the magnificent wood panelling and floors that remain today. 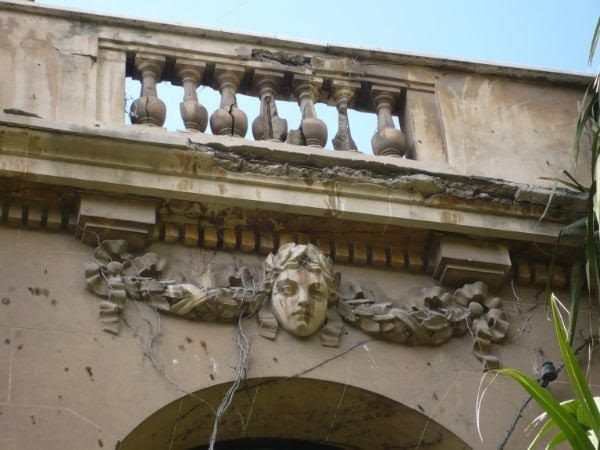 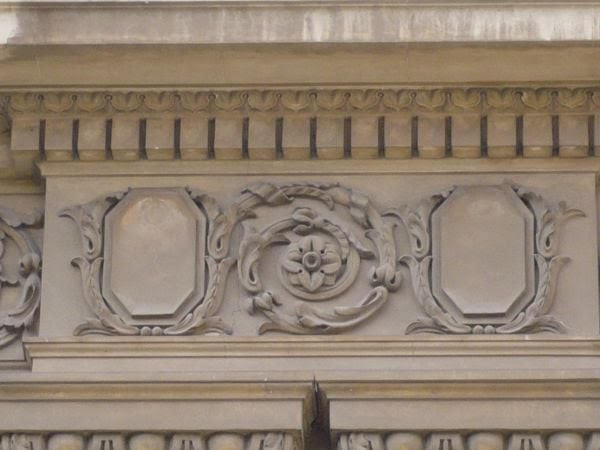 In 1934, Karam sold the villa to Banco di Roma which rented it to the great artist Muhammad Nagy (1888 – 1956). Nagy was among the founders of the modern Egyptian art movement, and established the modern painting school of Egypt. In 1956, the Italian bank rented the villa to the Alexandra Atelier which has since then and until the present remained there as tenant even though the villa in the meantime changed hands among several owners.

To get to the bottom of the matter, Watani met Muhammad Rafik Khalil, then President of the Atelier d’Alexandrie, who spoke in detail about the Atelier and the recent crisis it has been going through. Sadly, Dr Khalil (1947 – 2021) passed away suddenly on 14 March, only days following the talk Watani had with him. Dr Khalil was President of the Alexandria Atelier, Professor of Surgery at the Faculty of Medicine, and former head of the Egyptian Medical Syndicate in Alexandria. His departure was mourned by Egypt’s Culture Minister Ines Abdel-Dayem who described him as “an exceptional character talented in both science and writing prose and poetry. He was loved and respected for his strong belief in the value soft power exerts on peoples’ lives.” 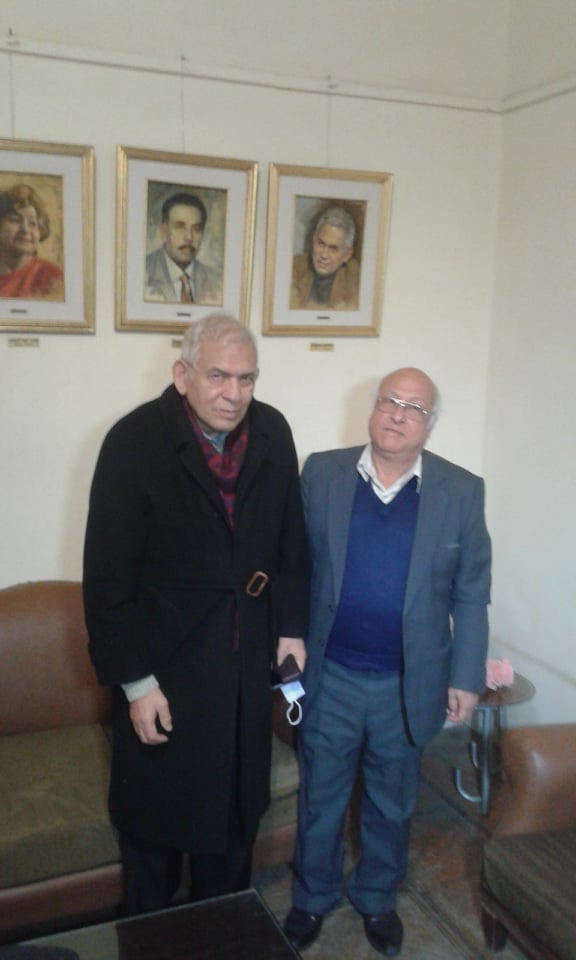 In his talk with Watani, Dr Khalil began with the history of the Atelier. “The Alexandria Atelier,” he said, “was founded in 1934 and housed on a floor of a building that was then the Swiss School in central Alexandria. Later, the Atelier moved to another place also in the city centre, close to the magnificent Sayed Darwish Theatre which today houses the Alexandria Opera House.

“In 1956, the Atelier moved into the villa it occupies today, rented then from Banco di Roma. The Bank was nationalised the same year, and was liquidated in 1966, after which the villa successively exchanged hands between a number of Italian, Levantine, and Egyptian owners and their heirs. At one point, a large part of the huge garden was sold, and three apartment buildings were built in its place.

“All that time, we remained as tenants of the villa.”

According to Dr Khalil, the building was listed in 1996 with the Ministry of Antiquities as a building of exceptional architectural style, buildings which warrant protection. By law, the Atelier acted as custodian of the building. In 2007, it was moved to the list of Islamic and Coptic antiquity heritage. “Since that date, we have been carrying out restoration and maintenance works in collaboration with the Ministry of Antiquities,” he explained.

“In 2015,” he continued, “an assault was waged on the villa [in an attempt to evict the tenants]. The Atelier took the matter to court which ruled in our favour that the rental relation was legal and should continue. 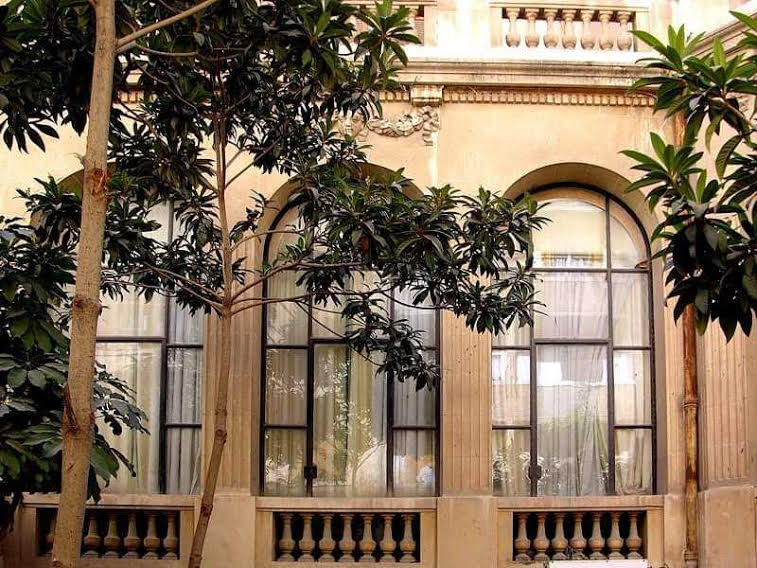 “In May 2018, Egypt’s Supreme Constitutional Court issued a ruling that would allow property owners to evict non-residential tenants leasing space under decades-old rental contracts. The new ruling would allow landlords to end non-housing lease agreements that have persisted long past their initial contract periods. In June 2019, the housing committee of the Egyptian Parliament approved a final draft law cancelling old rent contracts of all units rented pre-1996 that are not for housing purposes, but the bill has not so far been passed into law. Yet we have been ordered by court to evict the villa.”

According to the Atelier’s Facebook page, Culture Minister Ines Abdel-Dayem expressed complete support for the Atelier to retain its premises in the villa, and presented several suggestions that are currently being discussed with the board. 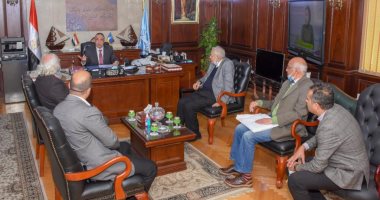 The Atelier’s board have met Governor of Alexandria, General Muhammad al-Sherif, who confirmed the need for a “legal solution that would protect the Atelier in its capacity as valuable heritage, and its cultural and educational significance, without negatively impacting the rights of the owners.” The Governor pledged to relay the demands of Alexandria’s intellectuals to the authorities concerned; this includes the ministries of culture, tourism and antiquities, and social solidarity.

“Today,” Dr Khalil proudly said, “the Atelier represents the first Egyptian association that brings together artists and literary persons in one venue. It has been a truly cosmopolitan association that hosts not only Egyptians, but other nationalities, including Lebanese, Italians, Armenians, French, Greeks, British, and Syrians, of various religions, ethnicities and cultures. 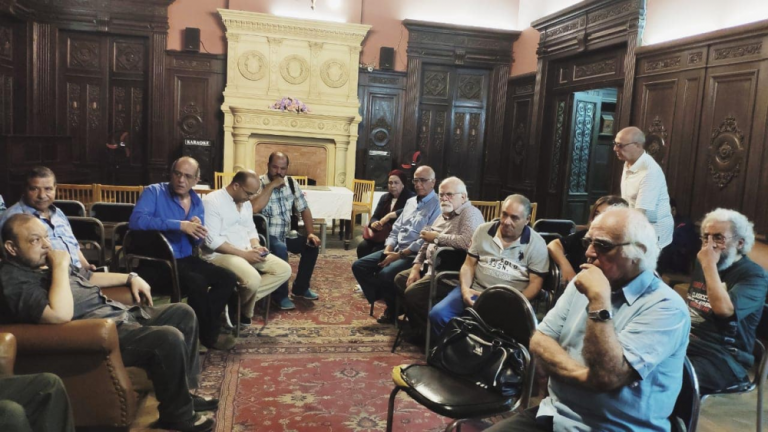 “The Atelier has had a strong cultural and enlightenment role since its establishment,” Dr Khalil noted. “Our modern times have shown how crucial such a role can be to counter extremist, backward thought that leads to terrorism.”

On its Facebook page, the Alexandria Atelier posts its history as a dynamic Egyptian Non-Governmental Organisation (NGO). It was founded by artist Muhammad Nagy in 1935 to act as a meeting point for all those active on the Alexandrian artistic scene. It moved to its present premises in 1956, and took the name of Atelier of Artists and Writers of the City of Alexandria. Ever since, it has had as presidents a succession of some of Egypt’s most distinguished artists including Nagy and Seif Wanly. 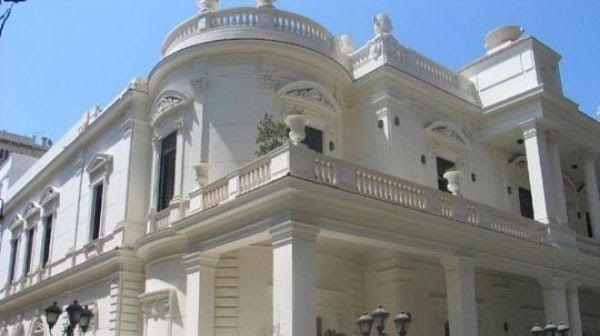 The Atelier is funded mostly by subscriptions of its some 1000 members. It also generates revenue by renting its halls and working studios at very affordable prices for exhibitions and artists in residence. These artists are young and old, and include painters, sculptors, photographers, ceramic workers, writers, poets, and novelists.

The names of Egyptian artists and men and women of literature who along the years participated in the Atelier’s activities read like a list of who’s who on Egypt’s artistic and literary scene, also music, filmmaking, and theatre scenes.

In recognition of the momentous cultural role played by the Alexandria Atelier, it has been visited by a number of Egypt’s epic Culture Ministers who were artists and intellectuals in their own right; among them Tharwat Okasha (1921 – 2012), Farouk Hosny, Shaker Abdel-Hamed, Emad Abu-Ghazi, and Helmy al-Namnam who were successive ministers during the period from 1987 to 2018.

In his talk with Watani, Dr Khalil concluded by saying that the Alexandria Atelier, the historic cultural and artistic edifice of Alexandria, and the older twin of the Cairo Atelier (1954), deserves a chance for survival. He proposed that the State would purchase the villa under dispute, and rent it to the Alexandria Atelier which would then act as custodian of that treasured heritage building.

Over the years, the Alexandria Atelier has created a space for connection between Egyptian and non-Egyptian painters, musicians, poets and writers. And the Egyptian masters who interacted with their counterparts from many places in the world came to impact generation after generation of people in Egypt. The Atelier thus has always represented a continuum of rich history and learning. May that continuum never be interrupted.