Alexandria University was established in 1938, the second State university in Egypt. It was originally named Farouk I University after Egypt’s monarch, but the name was changed to Alexandria University in 1952 following the revolution that brought down the monarchy; Egypt became a republic in 1953. Today, Alexandria University boasts 21 faculties and three institutes that offer degrees in various social, medical, engineering, mathematical, sciences, and liberal arts topics. It takes pride in being the alma mater of countless figures who have impacted academic and public life and service inside and outside Egypt, not least among them Nobel Laureate Ahmed Zewail (1946 – 2016), and the current patriarch of the Coptic Church, Pope Tawadros II who graduated from Alexandria University with a degree in Pharmacy in 1975.

The university had other branches in Egypt, in Damanhour and Matrouh, which later became independent universities. Branches set up outside Egypt are in Juba, South Sudan; and N’Djamena in Chad. 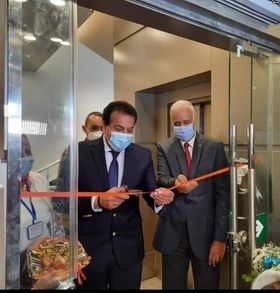 The museum houses a great collection of documents, manuscripts, and rare books in the sciences, arts, politics, and religions; also documents that pertain to academic work done in the university, and to graduates of the university who went on to become illustrious figures in their domains.

Dr Kurdi gave a word in which he said, “This museum showcases in a modern way cultural treasures that were in possession of the university and are now being displayed to visitors. Regular maintenance and preservation of the acquisitions secures them against any harm or damage, especially in case of the rare manuscripts.” 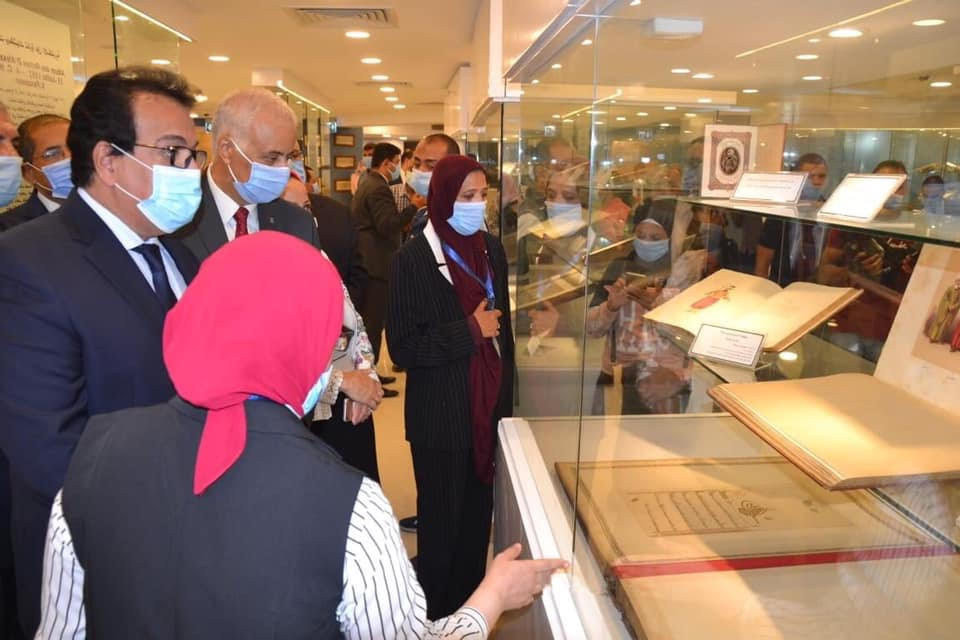 Being myself an Alexandrian and Watani’s correspondent in Alexandria, I decided to pay a visit to the newly opened museum. Mr Saleh Farouq Basha, General Manager of Library Affairs at the university, helped me arrange for my visit. This dynamo of a man made sure it would be an informative, pleasant one, and accompanied me all through my tour.

The museum is situated on the fifth floor of the premises of the Administration of Library Affairs of Alexandria University. Among the invaluable acquisitions it showcases are 1095 Arabic manuscripts; 139 oriental manuscripts, among them 24 Persian and 115 Turkish; and 1337 heritage rare volumes that go back to the 16th and 17th centuries and include 667 titles. 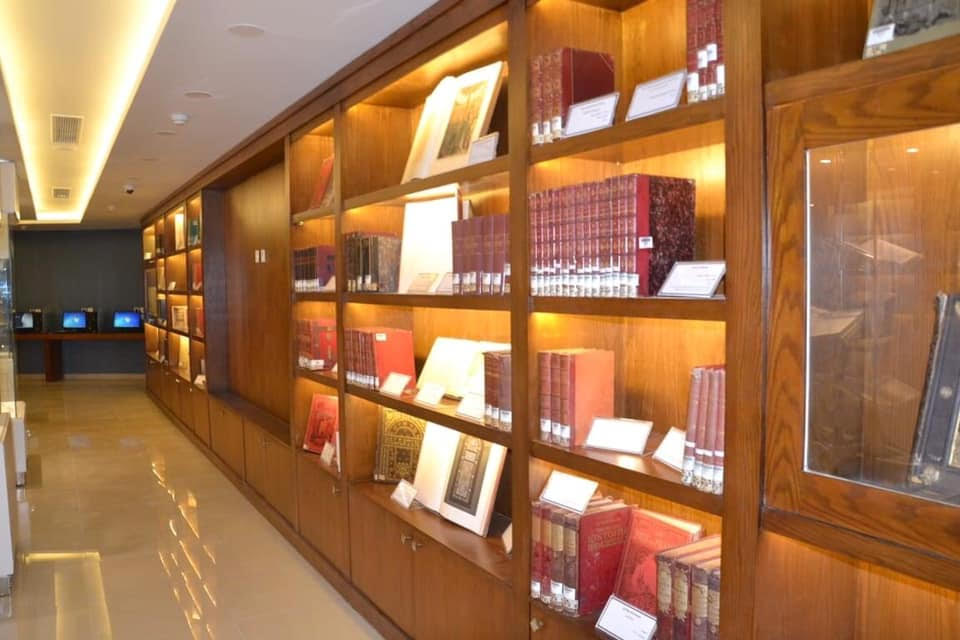 We met Dr Moussa who told us of the idea and effort behind founding the museum. “The rare acquisitions of Alexandria University, which include invaluable heritage articles,” she said, “had for decades been relegated to the university’s Library Affairs, and were stacked in closed rooms that made them almost inaccessible. I was unhappy with the situation, and relayed this to Dr Kurdi and Dr Hisham Gaber, Vice President of the university, who visited the rooms and decided to take action.” Upon which, Dr Moussa said, Alexandria University board allocated an entire floor on the premises of the Library Affairs building for a museum to house the acquisitions. “A year-and-a-half ago,” she said, “a committee, which I chaired, was set up to catalogue the acquisitions for museological display. We visited various faculties and departments in the university to check for items worth displaying in the museum.” Dr Moussa insisted, however, that the museum in its current form was not the end of the story, but was open to additional items in the future, many currently in the university’s central library. 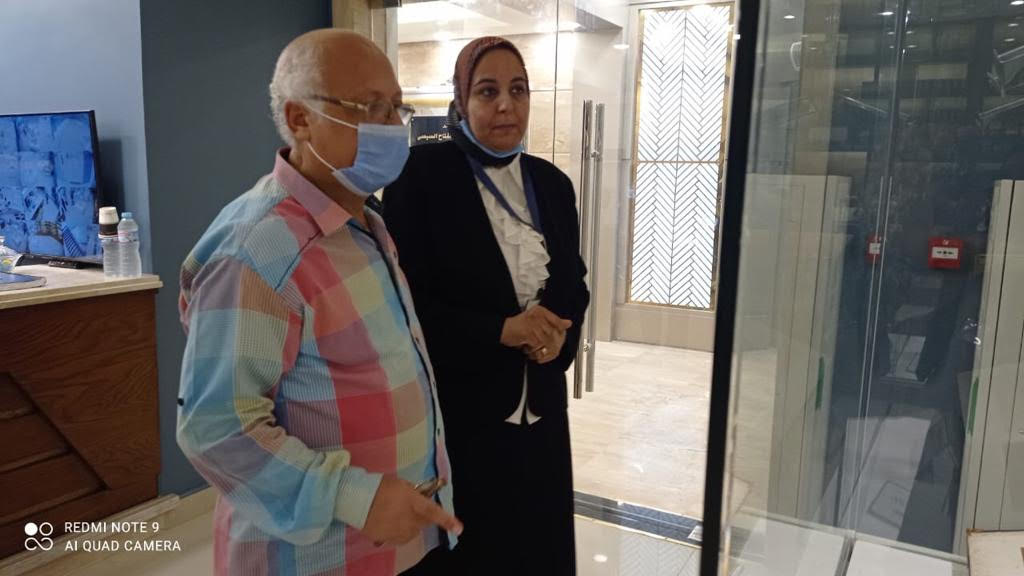 Dr Moussa explained that many of the exhibits were gifted to or deposited in trust of the university by kings, presidents, and scholars; some were also pieces that came from royal palaces confiscated by the government.

Mr Basha told me that the museum, which is open to both researchers and the general public, would be placed on the tourist itinerary of Alexandria. “We are contemplating a protocol between Alexandria University and Alexandria Education Administration to arrange for school visits to the museum,” he said.

For her part, Dr Hanem Abdel-Rehim, Professor of Library Studies and General Supervisor of Library Affairs at Alexandria University, pointed out that the new museum opened despite the exceptional conditions of coronavirus restrictions.

The museum is housed in three large halls.

On display is a collection of old atlases, and maps of the Atlas of the World published in 1922, showing the vast ancient borders of Egypt, and the Atlas of Egypt prepared by the Egyptian General Survey Authority in 1914. It also shows paintings and picture albums on Alexandria that go back to 1881, and a handwritten encyclopaedia on the city. 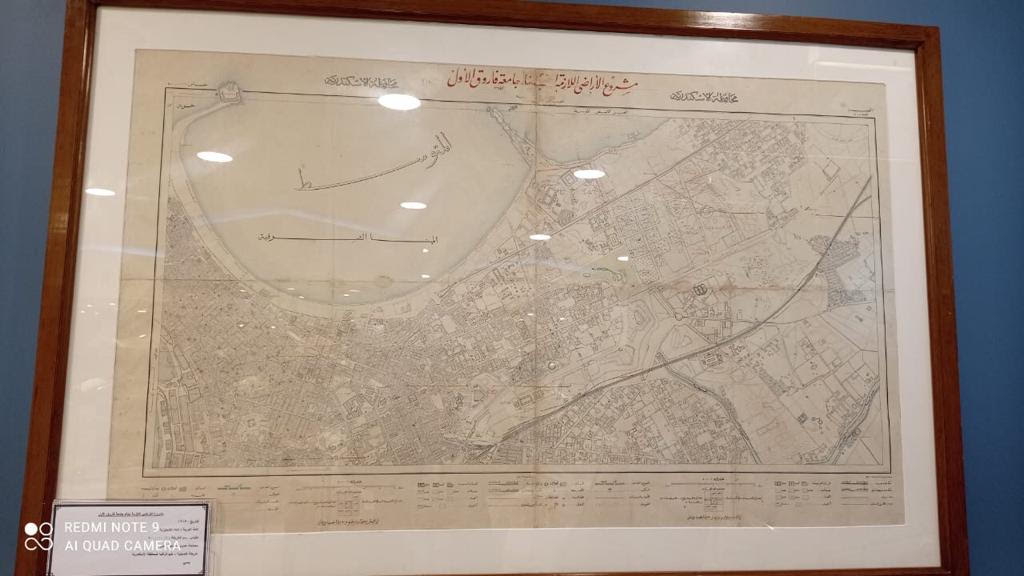 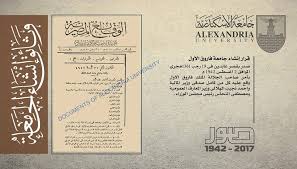 On exhibit are the oldest masters and doctoral theses granted degrees by the university, as well as graduation certificates of the most prominent graduates. These include the B.Sc certificate granted to Dr Zewail, the letter of his appointment a graduate fellow in the Faculty of Science, and his hand-written request for leave [to study abroad]. Dr Zewail went on to win the 1999 Nobel Prize in Chemistry for his work on femto-chemistry, becoming the first Egyptian to win a Nobel Prize in a scientific field.

Showcased are also manuscripts that cover topics as diverse as literature and poetry, medicine, lexicons and dictionaries, philosophy, logic, geography and history. 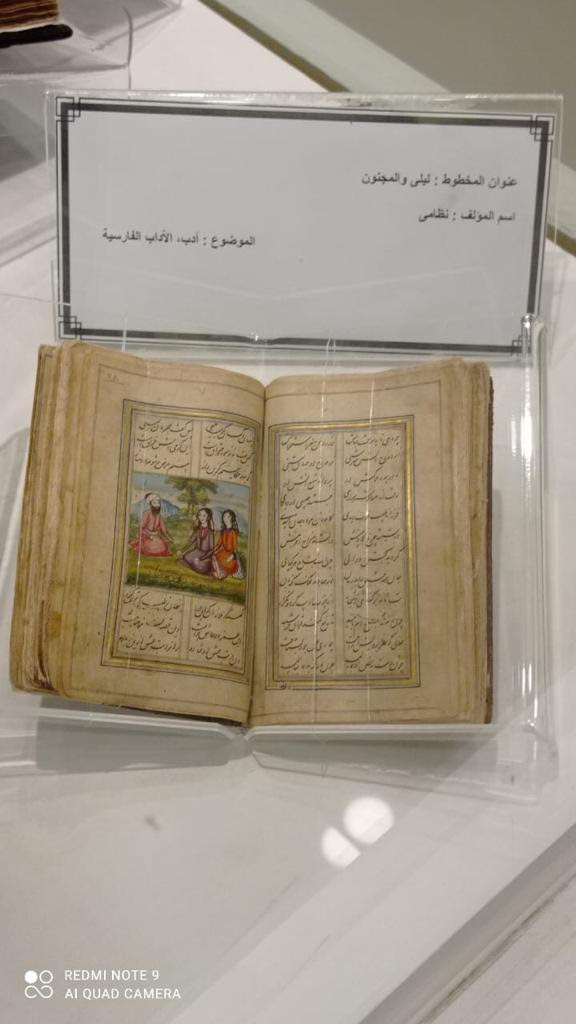 French and German on Egypt

Visitors to the museum are treated to a display of a rare collection of original French and German publications on Egypt that were gifted to King Fuad I who ruled Egypt in 1917 – 1936. Among these publications are the famed 19th-century Description de L’Égypte printed in 1809, the fruit of the work of the team of scientists and scholars who accompanied Napoleon’s military campaign against Egypt in 1798 – 1802. There is also the 1932  L’Égypte by Swiss photographer Fred Boissonas (1858 – 1946), commissioned by King Fuad I who was handed the first copy of the limited edition of the book. 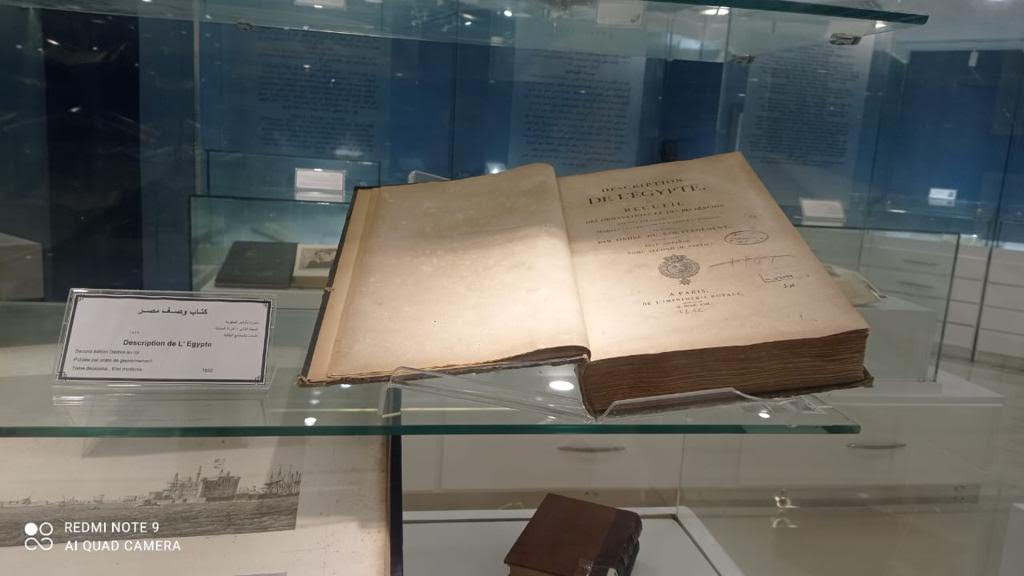 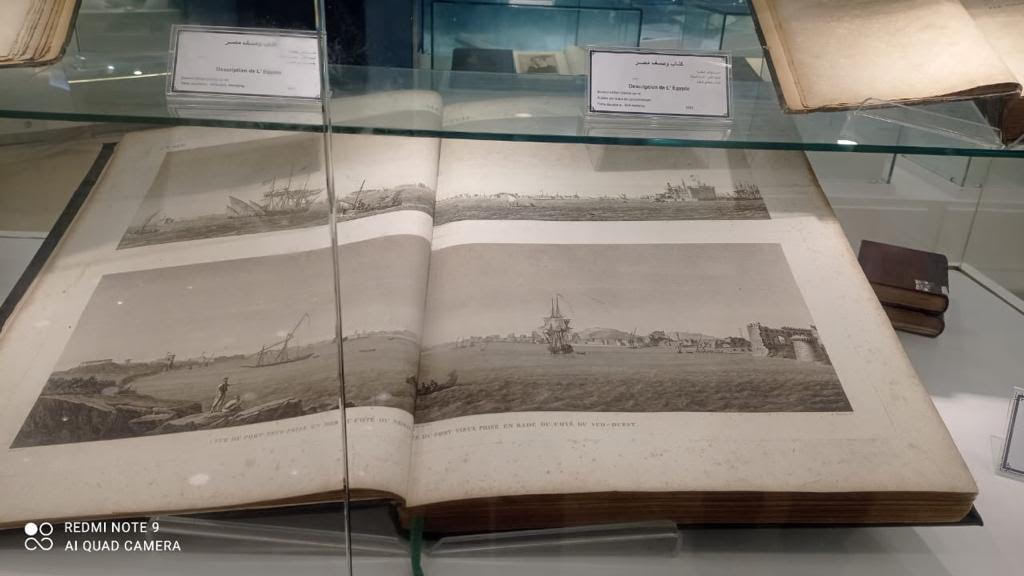 Other prominent books include a descriptive work on Egypt (Aegypten in Wort und Bild, 2nd ed., 1880) by Georg Ebers (1837 – 1898), a German Egyptologist and novelist; as well as a work by Carl Lepsius who was commissioned by Emperor Friederich Wilhelm IV of Prussia in 1842 to lead a scientific expedition to Egypt and Nubia to record monuments and to bring back to Prussia treasures he might discover. The set was one of the most important holdings of the German Archaeological Institute, Cairo, (Deutsches Archäologisches Institut- DAI) before it was gifted to Alexandria University. 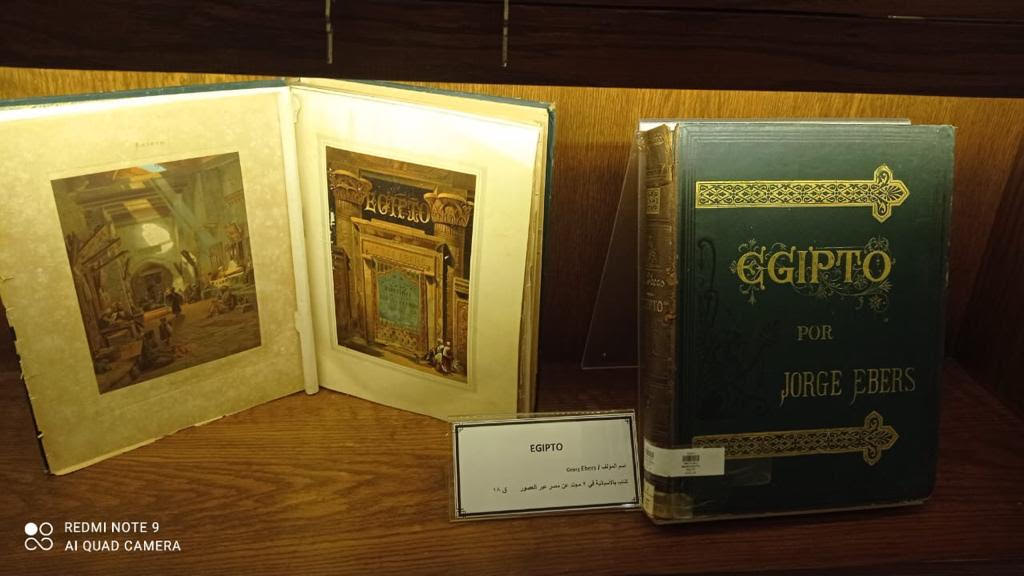 From the Ottoman era in Egypt (1517 – 1867) come huge volumes of pictures that show what life was like then; also ornamented manuscripts, and a large collection of Ottoman firmans (decrees) that covered the long period from 1597 to 1904 and which were collected by order of King Fuad I.

A special niche in Hall 1 houses valuable private collections donated to Alexandria University Library. Among them are the collections of the Alawite Dynasty that ruled Egypt from 1805 to 1953; Mahmoud Khater Bey (1875 – 1948) who was a writer, member of the supreme council of the Egyptian National Library known as Dar al-Kutuk (House of Books), and manager of Banque Misr printing press; Aziz Suryal Atiya (1898 – 1988), professor of medieval history and Cusader wars, and author of a number of substantial books and volumes on history, among them the 1991 Coptic Encyclopaedia; and German ophthalmologist and eminent orientalist Max Meyerhof (1874 – 1945). 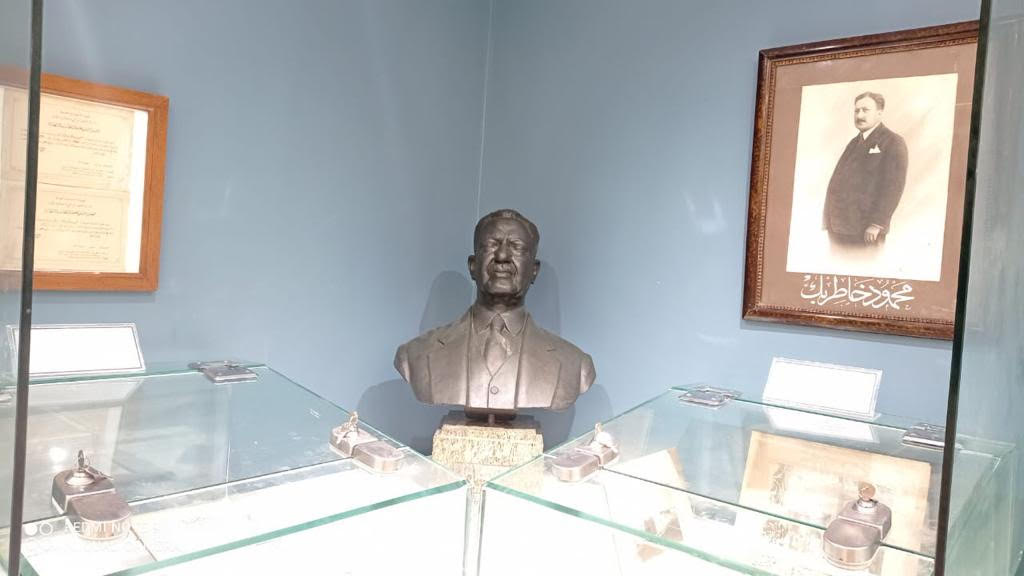 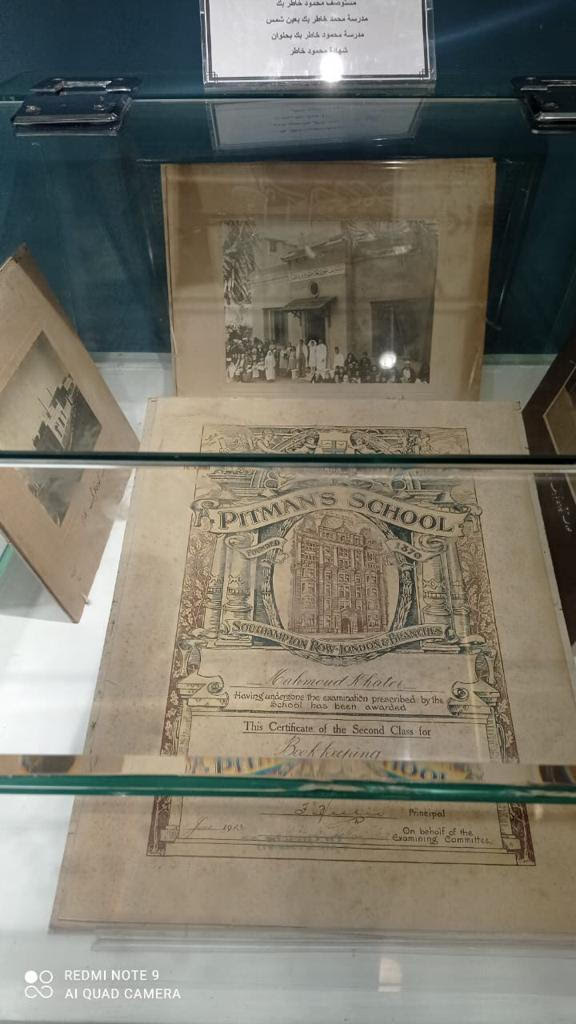 The second hall in the museum has been dedicated to the display the holy books of all religions. 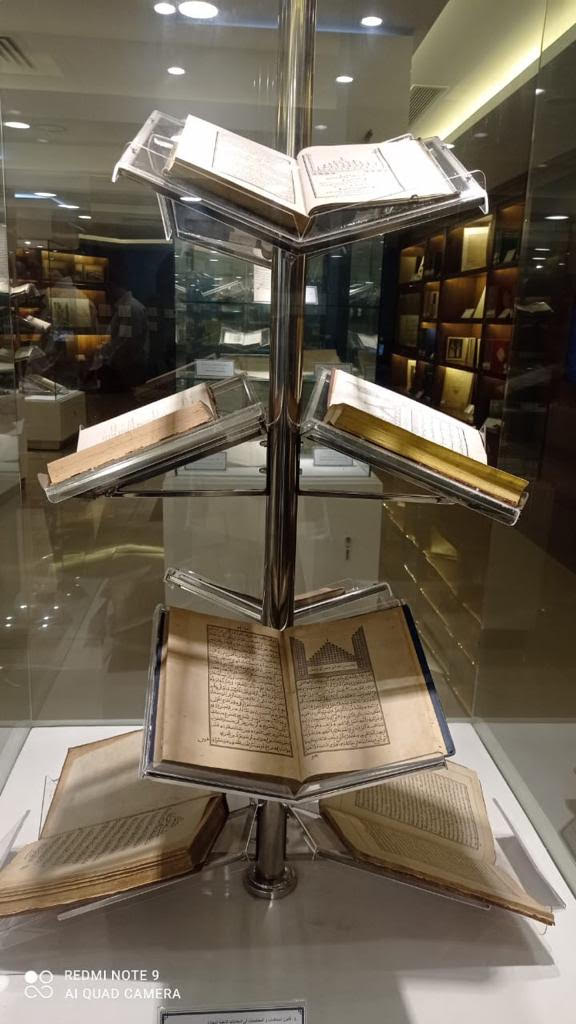 Visitors would be able to see some rare, old Jewish books and Torahs. 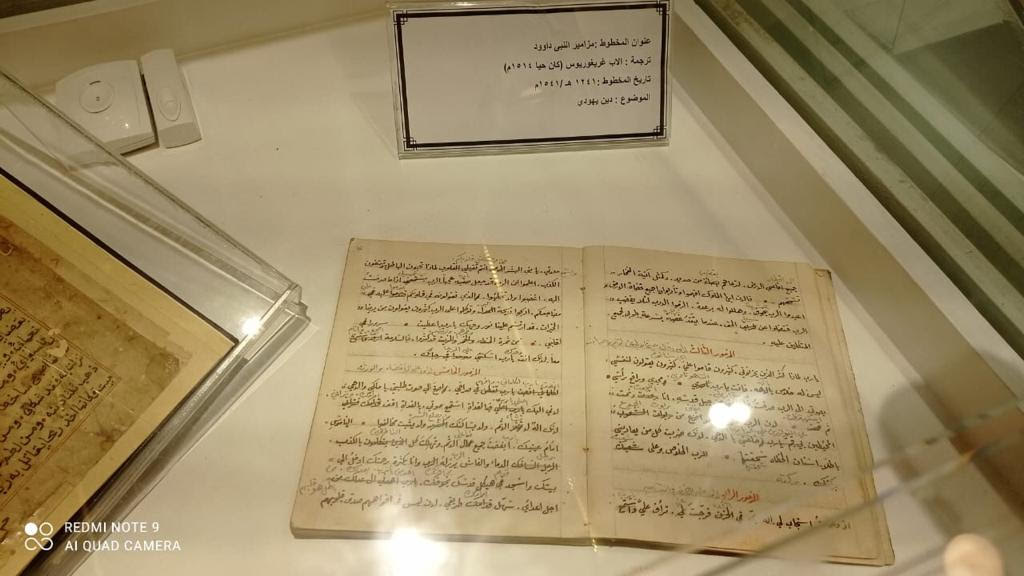 There is also a collection of Qur’ans the oldest of which goes back to the 11th century, as well as heritage books on Fiqh (doctrine), Tafseer (interpretation), Hadeeth (Prophet Muhammad’s words), and Seera (Life of the Prophet); also books on Sufism. 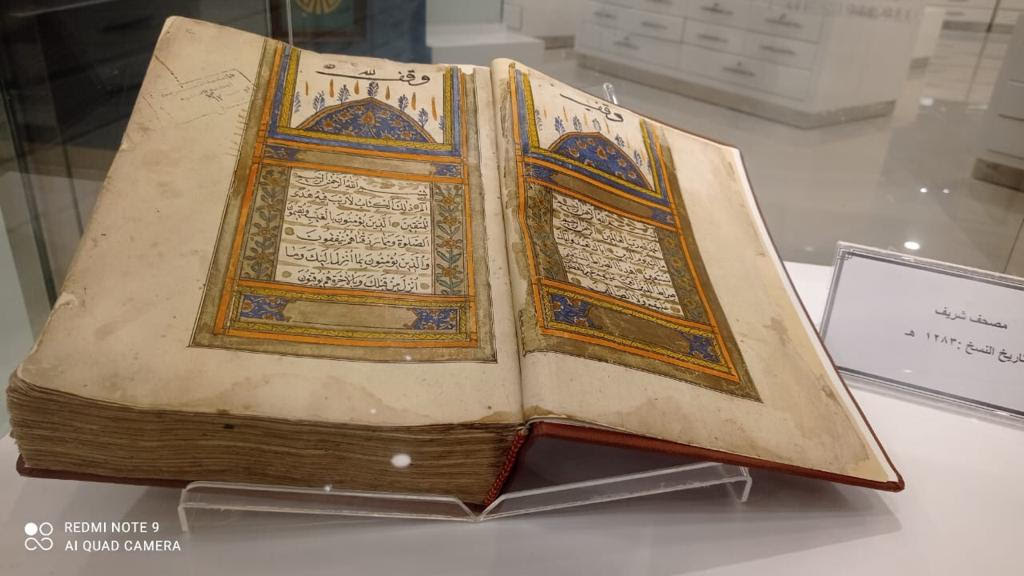 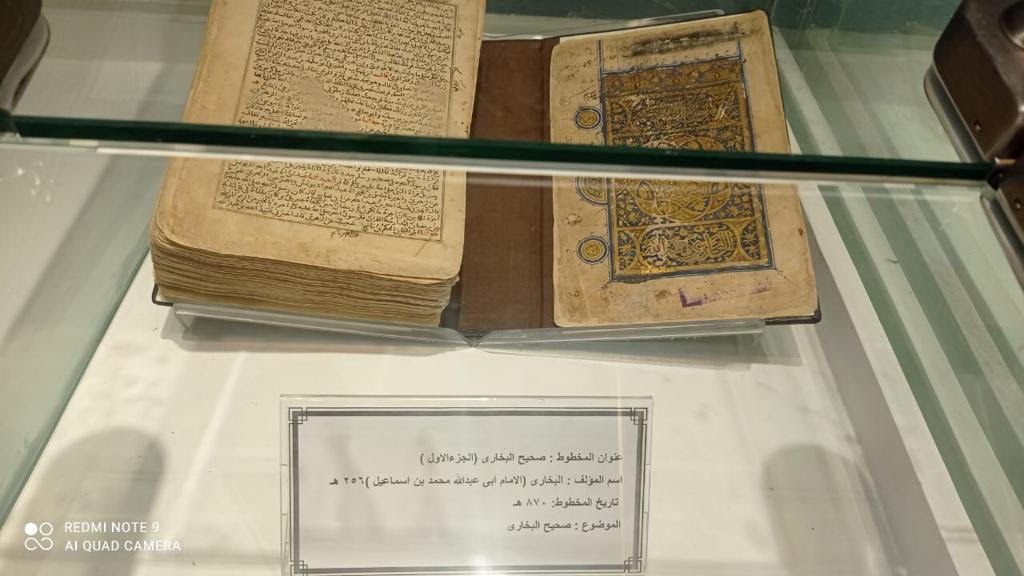 Coptic manuscripts include books on Theology and Doctrine; the 10th century Divine Praises by Monks. There are also documents pertaining to the establishment of the Institute of Oriental Studies at the Patriarchal Library of the Greek Orthodox Patriarchate of Alexandria. 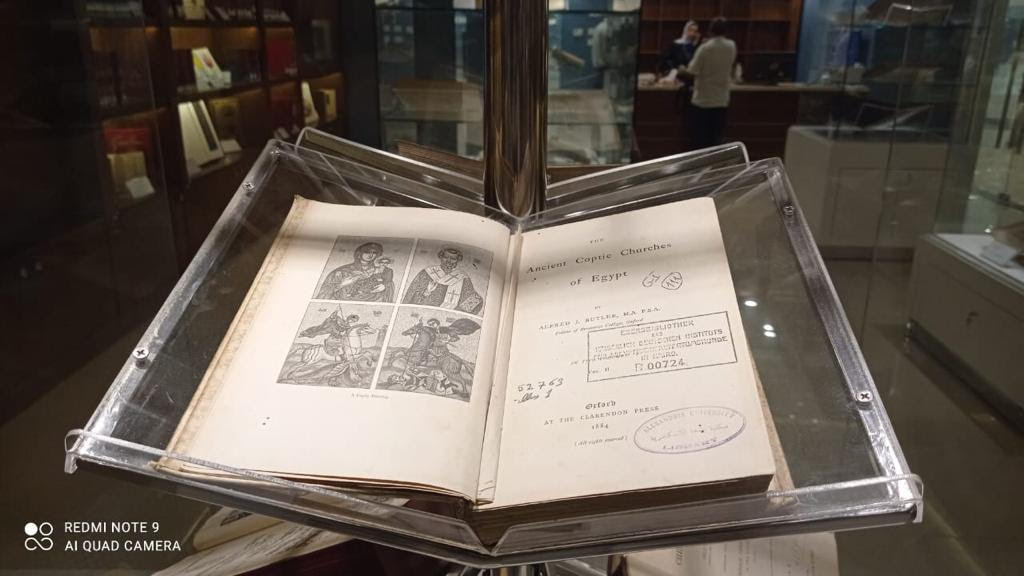 Non-religious manuscripts include one on the game of chess, by Abbasid poet and writer Ibn al-Habbariya, dating back to the 18th century; as well as elaborately ornamented Turkish manuscripts of the Ottoman era.

In the third hall of the museum, visitors can enjoy precious heritage books; a rare collection that dates back to the 16th and 17th century in various languages—the oldest dates back to 1580 AD. 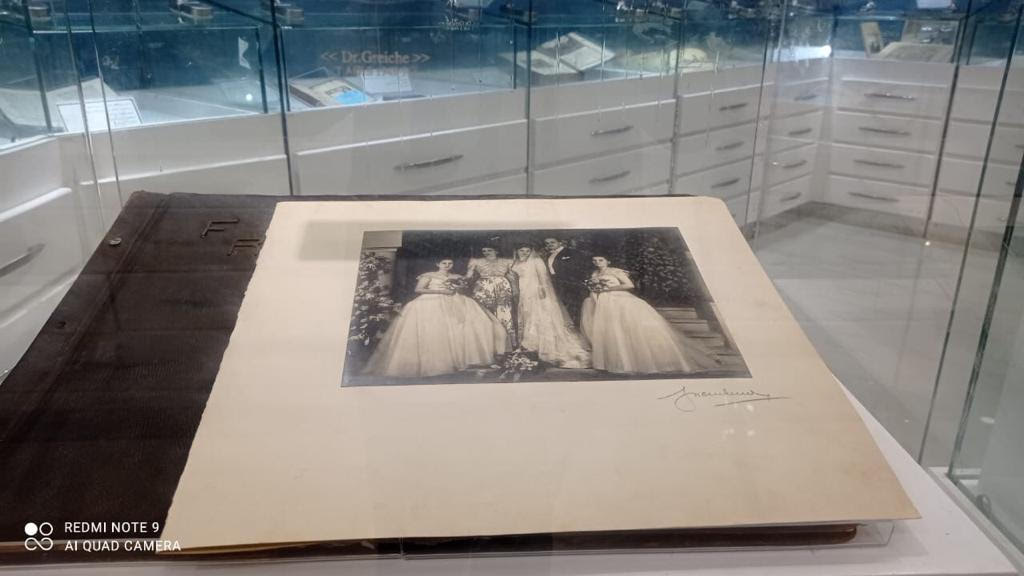 There are also several medieval documents written during the Crusader period, which were collected and published in Paris in the 19th century and include documents in Latin, Greek, Arabic, old French and Armenian.

Among the acquisitions confiscated from royal palaces are marriage, inheritance, and trade contracts some of which date back to 1650.

A special corner displays letters, including one written letter by Khedive Ismail in 1875, and another by Ibrahim Bek, minister of war, in 1795. There is also a letter from Muhammad Ali Pasha to the Austrian Consul, dated 1825.

In age of print

The museum highlights the historical development of writing and publishing methods, printing systems and the arts over the centuries. It showcases samples of pharaonic writings on papyrus, and worn-out fragments of old manuscripts which are almost impossible to restore even though some are painted with gold water and decorated in colours that remain bright till today. 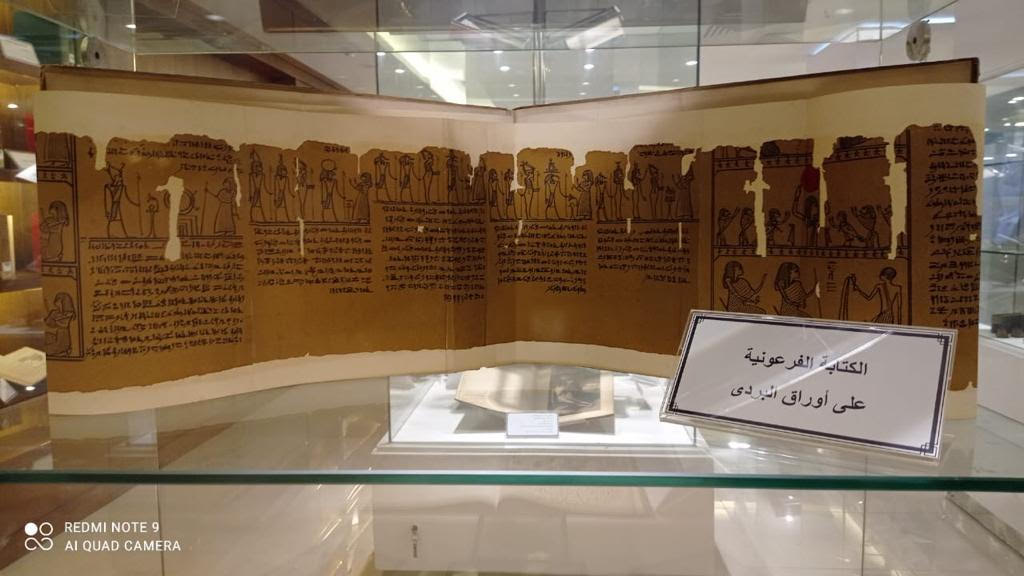 A set of old printing tools, wooden and zinc letters, and books herald in modern printing. Among the printed books showcased are dictionaries printed in 1682 – 1935, books on the Crusader Wars published on 1943 – 1906, non-Arabic publications that go as far back as 1581, the first Arabic publications printed in Europe since 1861, and books on the inauguration of the Suez Canal in 1869. There are also several Christian books printed in the 18th and 19th centuries, among them one on the journeys of St Paul printed in 1703. 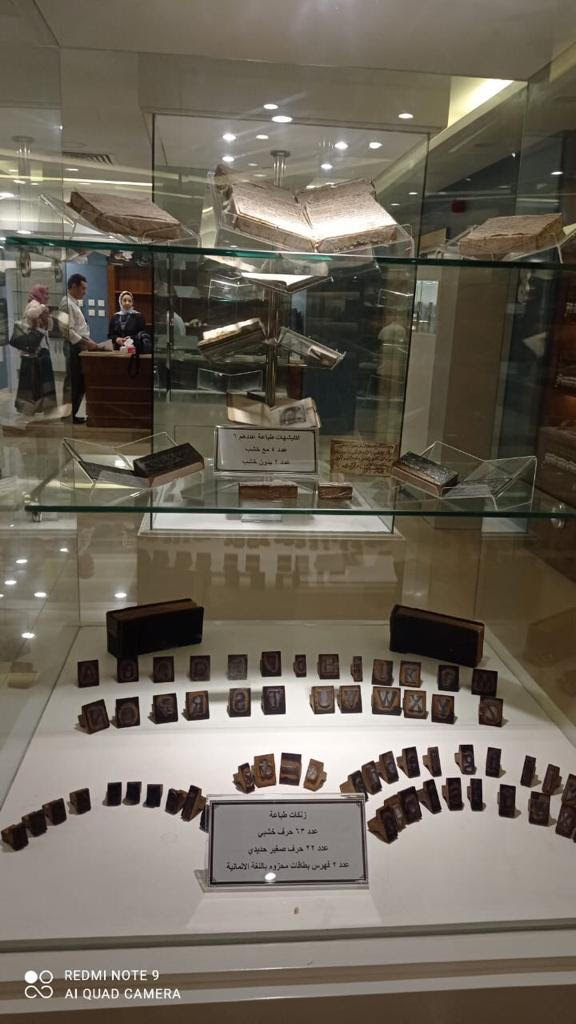 As I concluded my tour of that fantastic museum, I could not help recalling Dr Moussa’s words that it in no way displays the full collection of acquisitions of Alexandria University. I left, hoping to see more of this magnificent heritage displayed some day soon.