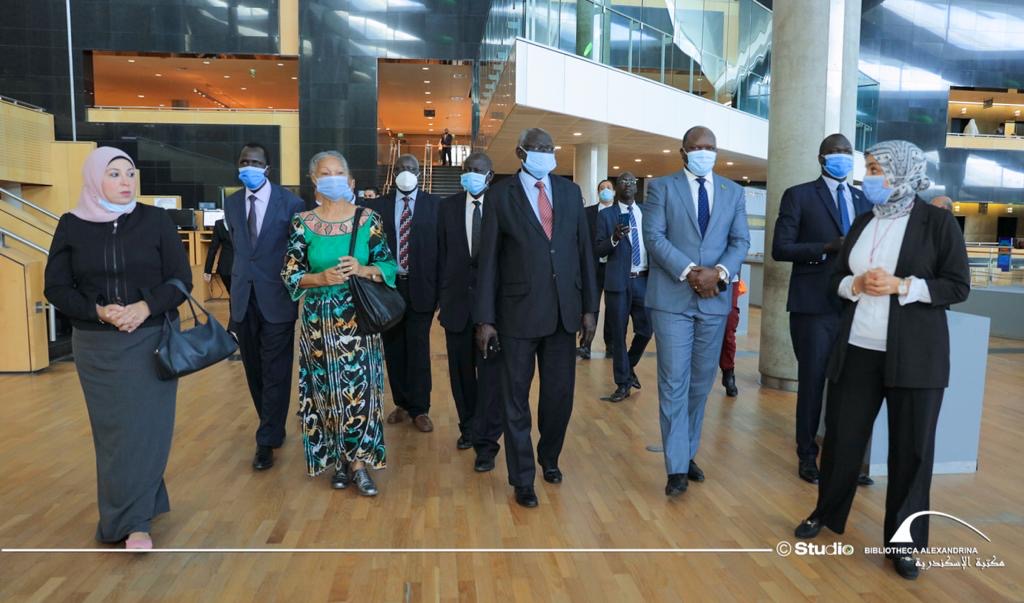 The meeting focused on the process of operating the Alexandria University branch in South Sudan, and on the disciplines it offers in agriculture, veterinary medicine, engineering, nursing and education. Joint cooperation was discussed in fields of science and research to match the growth and development visions of South Sudan.

Dr Gaber gave a presentation on Alexandria University, its various faculties and institutes, and the unique study programmes it offers. He said that relations between Egypt and South Sudan were of singular importance, the two countries being united by strong historical bonds and by the life-giving River Nile.

According to Dr Gaber, Alexandria University in South Sudan is set to open next November.

The two parties discussed the exchange of Egyptian professors and researchers in training courses that will take place at South Sudan universities. They also discussed the possibility of increasing the number of scholarships offered annually to undergraduate and postgraduate students in South Sudan to study at Alexandria University, in addition to increasing the number of undergraduate students and providing them with all needed facilities; and preparing summer schools for South Sudanese students in Egypt.

The vice-deans reviewed the various study programmes in the Arabic, English and French.

South Sudanese students studying at Alexandria University expressed their sincere gratefulness to the university for the support it gave them. Dr Gaber listened to their problems regarding visas, housing and expenses, and promised to resolve them as soon as can be. The number of South Sudanese graduate students in the university is 16, whereas 217 students are enrolled as undergraduates.

The opening of Alexandria University campus in the South Sudan town of Tonj had been scheduled as far back as October 2016, but was postponed owing to political unrest in South Sudan. Construction of the first two phases of the campus had been completed; and the departments of agriculture, veterinary science and education were ready and waiting for the campus to open as soon as the unrest subsides.

The project of establishing a campus of Alexandria University in Tonj was launched in 2013, supported by a USD1.27 million-grant from the Egyptian Ministry of Higher Education.

Alexandria University is not the only Egyptian university with branches in African countries. The Cairo University campus in Khartoum was established in 1956, but was suspended in 1989 under Sudanese President Omar al-Bashir who was President of Sudan from 1989 to 2019. It was not closed, however, but was allocated premises at Cairo University in Cairo, where Sudanese students continued to enroll. It now boasts 1030 students from Sudan and South Sudan, who study arts, commerce, law, and science.