On Monday 27 December, the foundation stone was laid for the New Abul-Rish Children’s Hospital on the grounds of the campus of the Cairo International University, in the Giza satellite city of 6th October. The new children’s medical complex is the largest of its kind in the Middle East. Attending the laying of the foundation stone were Minister of Higher Education and Scientific Research and Acting Health Minister, Khaled Abdel-Ghaffar; Giza Governor, Major General Muhammad Rashed; and Cairo University President, Muhammad Othman al-Khosht.

According to Dr Khosht, the medical complex will be built over 88,000 Sq.m., and will include more than 300 beds serving inpatients, intensive care units, and incubators. The project is estimated to cost EGP3.4 billion, and will include the main hospital building, a hotel for the families of the patients, a training centre, a nursing institute, a hostel for the medical teams, in addition to service buildings. The new complex will include 10 operating theatres equipped with state-of-the-art medical equipment; one for one-day surgeries, the others are for general and cardiac surgeries, catheterisation, endoscopy, chest, brain, nerves and orthopaedics, in addition to an emergency operating room. The hospital will also feature 10 intensive care units to serve some 90 patients in different specialisations including general internal medicine, internal cardiac, general surgery, neurosurgery, cardiothoracic surgery and cardiac catheterisation. The hospital will offer other medical services including Electroencephalogram, X-rays, CT Scans, MRI, Fluoroscopy, Ultra sound and Electrocardiogram, this in addition to the laboratories and pharmacy.

In his speech during the laying of the foundation stone, Dr Abdel-Ghaffar described the new complex as a “strong addition to the medical field in general, and the paediatric field in specific”. He confirmed that achievements by Egyptian academic institutions are always strongly backed by the government.

For his part, Governor Rashed described laying of the foundation stone of New Abul-Rish as a milestone on the way of reaching the dream of the New Republic supported by President Sisi himself. He promised that Giza governorate would provide all means of support for the project until it sees light. 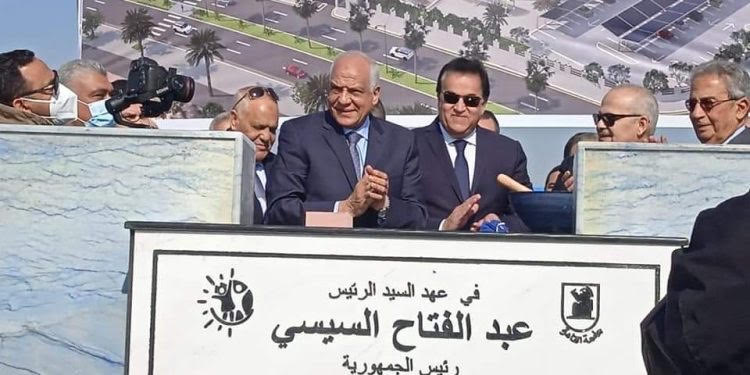 The old Abul-Rish Children’s Hospital is a teaching hospital affiliated to Cairo University. It is located in the district of al-Mounira in central Cairo, and is the oldest and most prestigious specialised hospital for paediatrics and surgery in Egypt and the Middle East. Established in 1928, it was the first academic department of paediatrics in Egypt.

The hospital was reconstructed and opened in 2000. It has been providing general and specialised medical services to children from all over Egypt free of charge for more than 90 years. It receives half a million paediatric patients annually and performs more than 11,700 haemodialysis sessions, 4,000 surgeries, 2,500 endoscopic procedures, 24 kidney transplants and 12 marrow transplants annually. It offers the latest treatments for patients with rare diseases such as genetic kidney disease, metabolic, Gaucher and Hemophilia. The hospital includes 265 beds (up to 333 beds with the completion of development projects), six intensive care units, 52 neonatal incubators, six operating rooms, 14 outpatient clinics, in addition to reception, emergency and one-day services.