To commemorate the 25th anniversary of diplomatic relations between Egypt and South Korea, the Korean Cultural Centre (KCC) in Cairo has broadcasted for a full week a series of video shots under the rubric “Korea as seen by Egyptians”. The videos provide an interactive space for Egyptians who wish to travel to or study in Korea, presenting a perspective of the country beyond the familiar stuff.

Taking part in the video was Dr Salah al-Gebeily, professor of Arabic language and Islamic studies at Hancock University in Korea, where he has been teaching for seven years. The videos show interviews with Egyptian students studying in S.Korea; among them Dr Sarah Maged, the first Egyptian woman to earn a doctoral degree in the Korean language.

The KCC also aired a video of the Korean band, VANDI, performing the famous Korean song ‘Arirang’, as well as “Alf Leila w Leila” (A thousand and one nights) of the legendary Egyptian diva Umm Kulthoum (1898 – 1975).

According to Director of the KCC Yang Sang Keun, all public celebrations on 25 years of Egyptian-South Korean relations, that had been prepared earlier this year, were cancelled because of the spread of COVID-19. He noted that this significant occasion, which coincides with the National Day of South Korea, has been celebrated in the virtual space..

A laser light show in front of The Giza Pyramids, organised by the South Korea Embassy in Cairo on 22 November 2020, highlighted the celebration of the 25th anniversary of Egyptian-South Korean diplomatic relations. 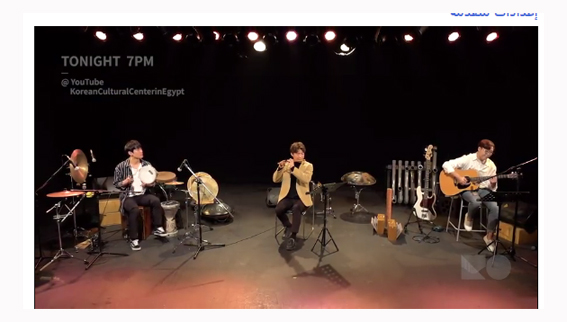