Early this afternoon, the courtyard of St Mark’s Cathedral in Azbakiya in Downtown Cairo saw hundreds of Copts gather from places all over Egypt, despite COVID-19 precautions, to pay their last respects to their beloved Fr Makary Younan (1934 – 2022) who passed away yesterday owing to COVID-19).

Pope Tawadros mourned Fr Makary, describing him as “the blessed father … who rested in the Lord following a life of dedicated service”. The Pope offered his condolences to Anba Raphael and the priest assembly of Downtown Cairo churches. He prayed for divine comfort for Fr Makary’s family, and for the Lord to rest his virtuous soul in peace with all the saints. 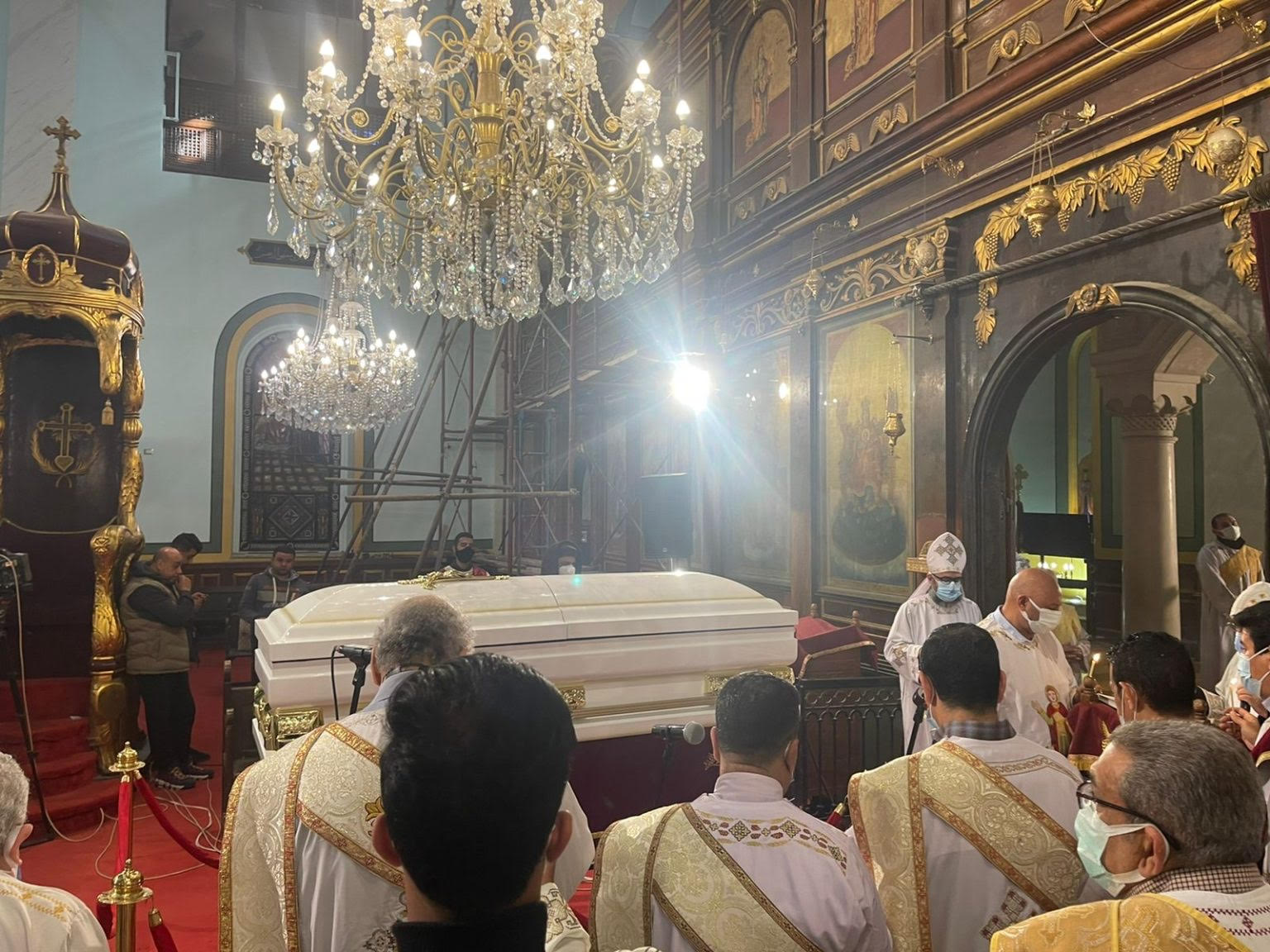 Inside the cathedral, the place Fr Makary had served in for some 45 years, the funeral service was led by Anba Raphael, Bishop-General of Downtown Cairo Churches; participating in the service were Anba Ermiya, Bishop-General and Head of the Coptic Orthodox Cultural Centre; and Anba Danial, Abbot of the monastery of Anba Pola in the Red Sea region. A number of public figures and MPs also attended. Large screens were placed in the courtyard for the congregation outside the cathedral to follow the funeral service. 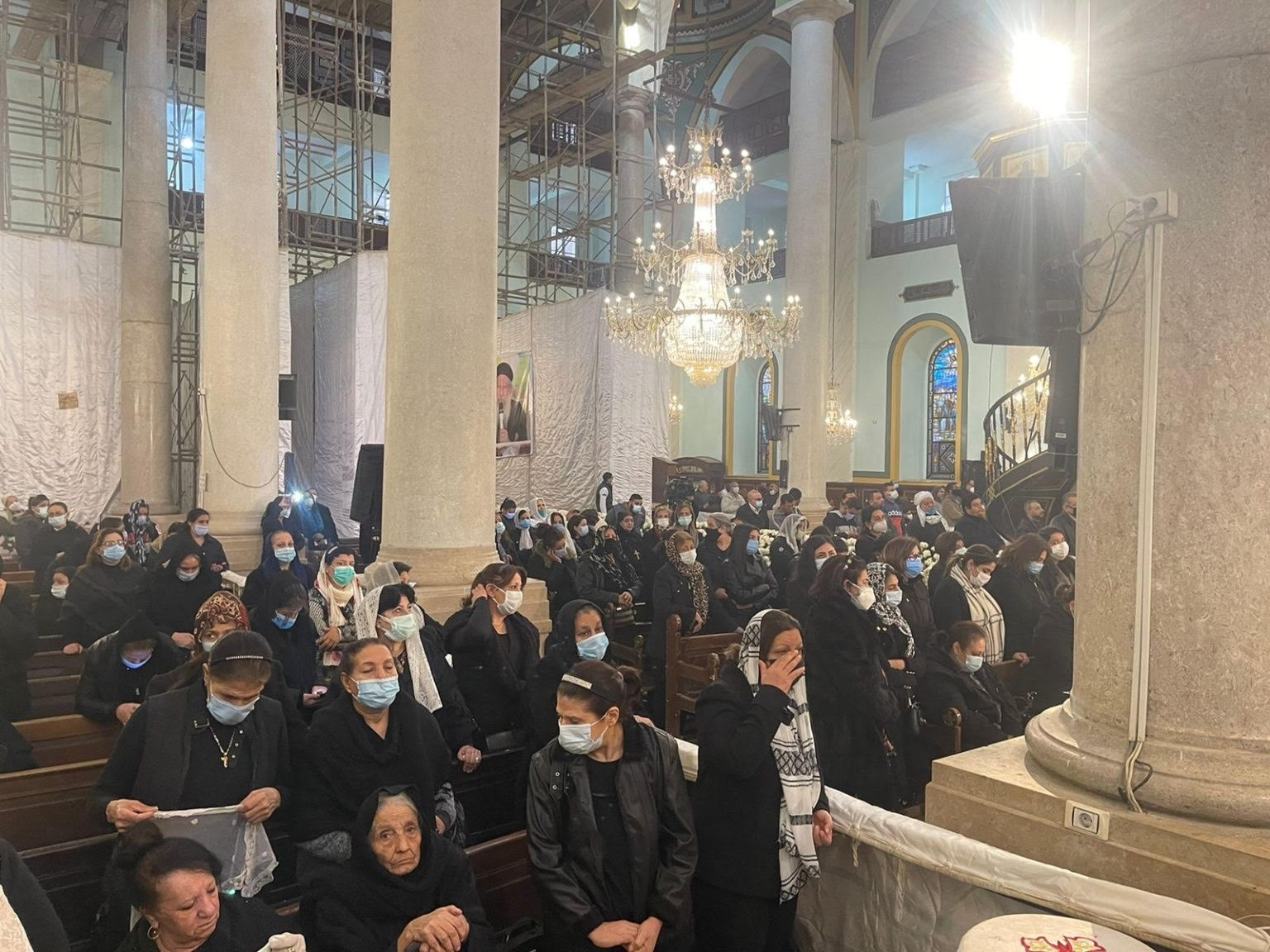 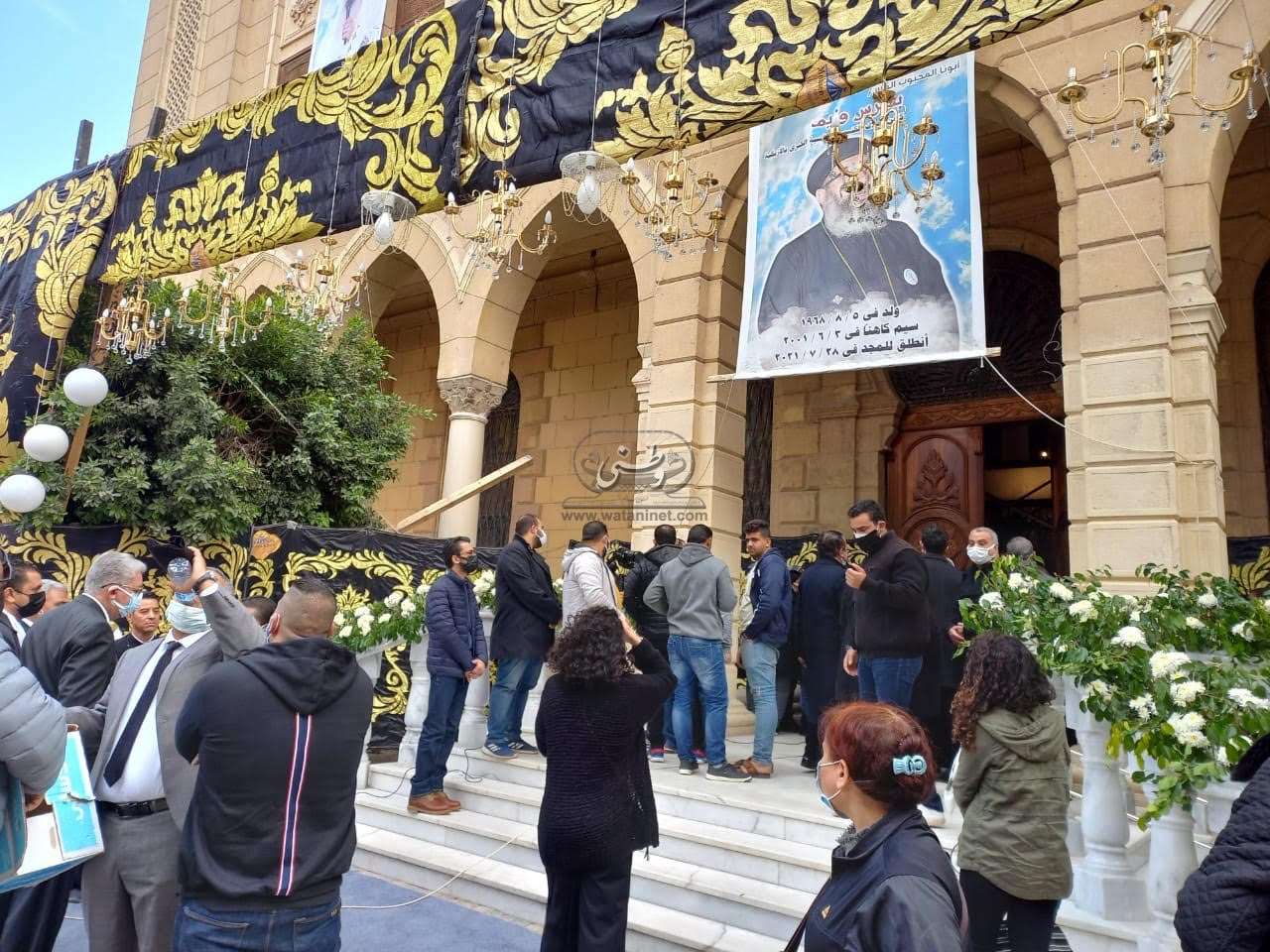 During the funeral service, Anba Rapahel gave a word in which—with Fr Makary in mind—he focused on the priesthood, both the literal and underlying meaning of the word. He pointed out that a priest remains a priest until the end of times, and continues to pray for and intercede in favour of his flock before the divine throne. A priest, Anba Raphael said quoting the 4th-century St John Chrysostom, lends his voice and hands to Christ, meaning he says and does what Christ requires him to say and do. A priest, Anba Raphael said, is gifted by Heaven with a special power which he uses to serve people and not to honour himself. This heavenly power hinges on love, Anba Rapahael said, love for the Lord and for His people.

Anba Raphael alluded to Fr Makary’s great, dedicated service at St Mark’s in Cairo, also in many places over the world, saying he trusts that Fr Makary will be interceding on our behalf in the Kingdom of Heaven. “Almost everyone is grieved and disturbed at the passing of Fr Makary,” Anba Raphael said, “but so much honour is awaiting him in the Kingdom of the Heavenly Father. He served for long years here, and now was the time for him to depart our world, and continue his service in Heaven.” He prayed for God to comfort the hearts of all those who who loved Fr Makary, and offered his condolences to Fr Makary’s daughters Nevine, Nora, and Mariam. “He held a special place in our hearts, and now we are happy that he has gone to his eternal home,” Anba Rapahael said. 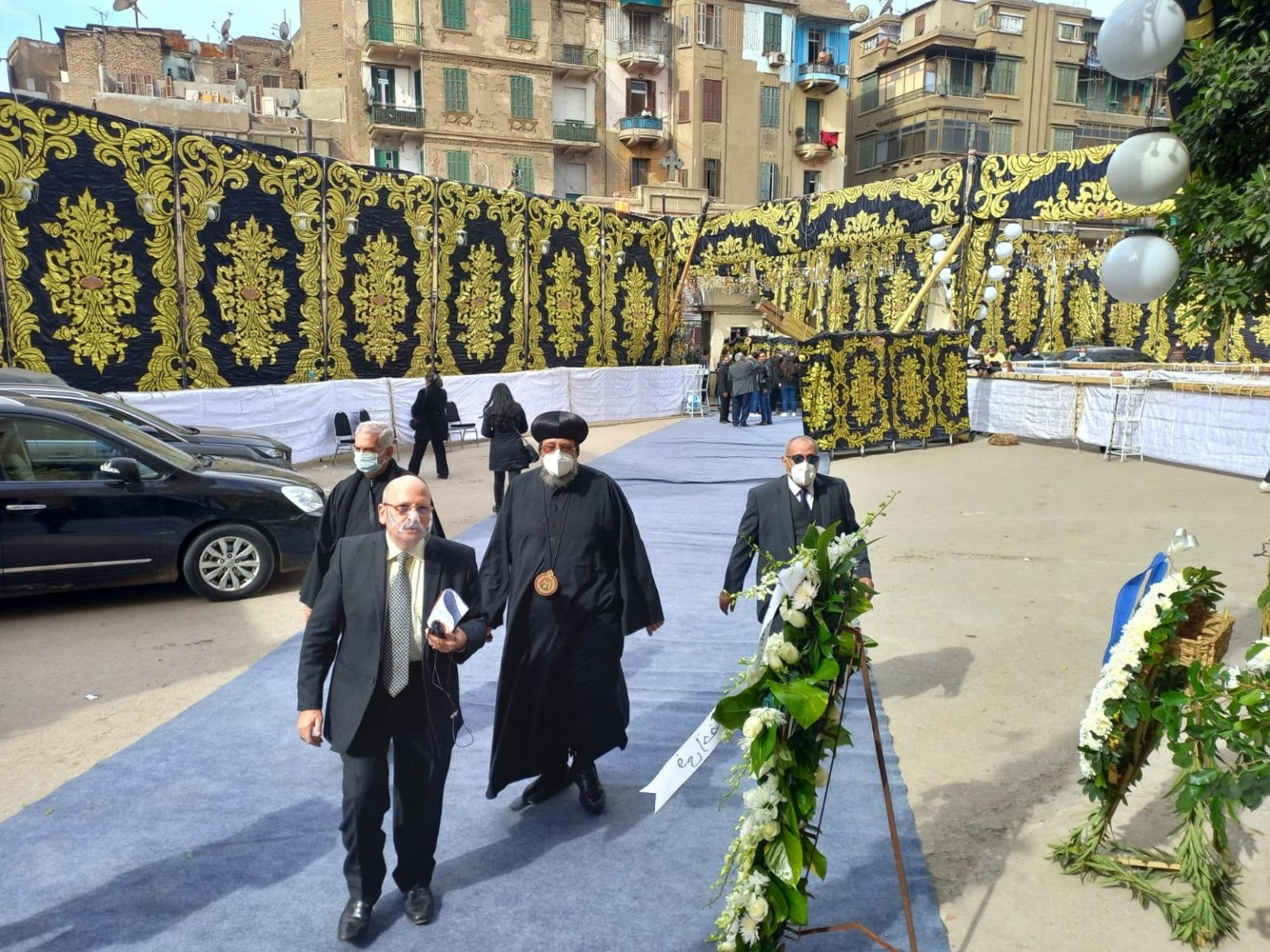 Anba Raphael thanked President Abdel-Fattah al-Sisi for his condolences to the Church for the departure of Fr Makary. He remarked that President Sisi had shown special care for Fr Makary during the time he was in hospital before he departed our world. He also thanked Anba Ermiya and Anba Danial for participating in the service.

Fr Makary Younan breathed his last yesterday 11 January in a Cairo hospital where he had been receiving treatment for COVID-19, after he and his wife had been diagnosed with COVID-19 and were hospitalised some two weeks ago. His wife passed away on 7 January.

Fr Makary was a prominent Coptic priest famous for his powerful preaching, prayer, and gift for exorcism; his weekly prayer meeting was held at St Mark’s Cathedral in Azbakiya, and attracted thousands of Coptic and Muslim attendants who were eager for his blessing, healing prayers, or for casting out demons that possessed them. The meeting was televised live; thousands upon thousands of others followed it on TV. 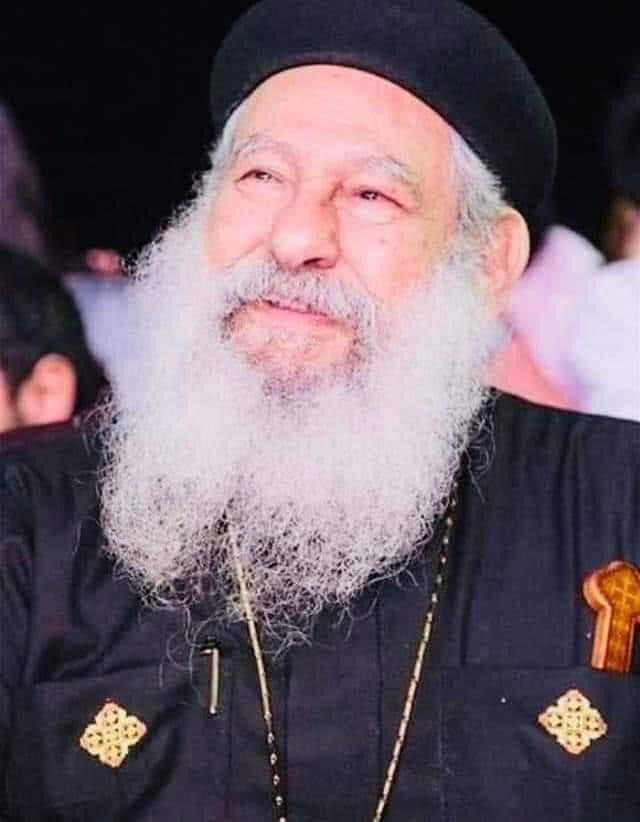 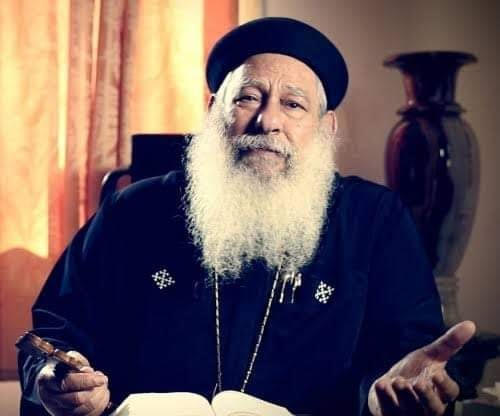 Born Sabry Younan Abdel-Malek on 1 March 1934, in Assiut some 350km south of Cairo, the young man who was to become Fr Makary earned a BSc degree and a higher diploma in teaching; also a diploma from the Coptic Orthodox seminary, the Clerical College. He went on to work for the Egyptian government for 19 years, then resigned in order to be ordained a priest.

In July 1976, Sabry Younan was ordained a priest in Assiut, and named Fr Makary Younan. But he only served in Assiut for a few weeks, after which he was moved to Cairo’s St Mark’s in Azbakiya where he served 45 years.