In a move that reflects ties of ecumenism extended by the Coptic Orthodox Church, Pope Tawadros II opened on 14 January 2022 an exhibition of bronze icons by Lithuanian artist Aleksandras Aleksejevas.

The exhibition has been held at the Institute of Coptic Studies (ICS) in Cairo, in cooperation with the Lithuanian Embassy, and runs till 18 January, following which it will be hosted by Anafora centre, off the Cairo Alexandria Desert Road, from 19 to 26 January, under the auspices of Anba Thomas, Bishop of Quosia (also written Qoussiya as pronounced) and Mir, and founder and sponsor of Anafora retreat farm.

The opening was attended by Lithuania’s Ambassador to Cairo Artūras Gailiūnas; also the Cairo ambassadors of Albania, Dominican Republic, Mauritius, Spain, and Sweden; as well as high ranking representatives from embassies of Bosnia, Malta, and Poland; and a number of diplomats and Lithuanian embassy staff. 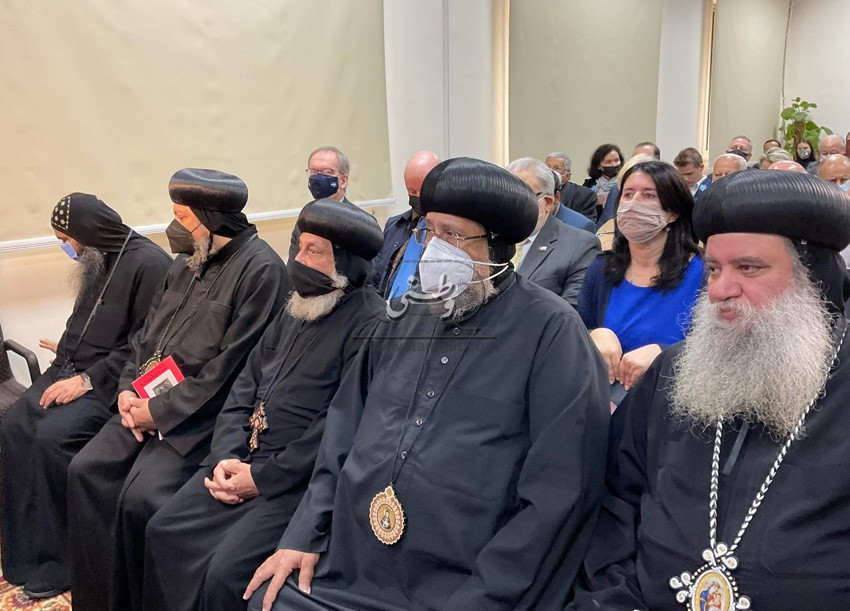 Ishaq Agban, Dean of the ICS, talked first, speaking of the history of Institute since its foundation in 1954, explaining that it now includes 13 departments among which the most important is the Coptic Art department. Apart from teaching about Coptic Art, he said, the department produces art and heritage crafts including icons, mosaics, frescoes, textiles, woodwork, glasswork, pottery work, and others.

Dr Agban spoke of the exhibition, saying it displayed 24 bronze icons of saints familiar to the Coptic Church, and also other saints who Copts may not know that well. He introduced the Lithuanian artist as an Art professor who lives and works in London following earning a doctoral degree from the UK In 2018. Aleksandras Aleksejevas, Dr Agban said, who works with various materials but whose favourite is bronze, has been a member of the British Association of Iconographers since 2008. 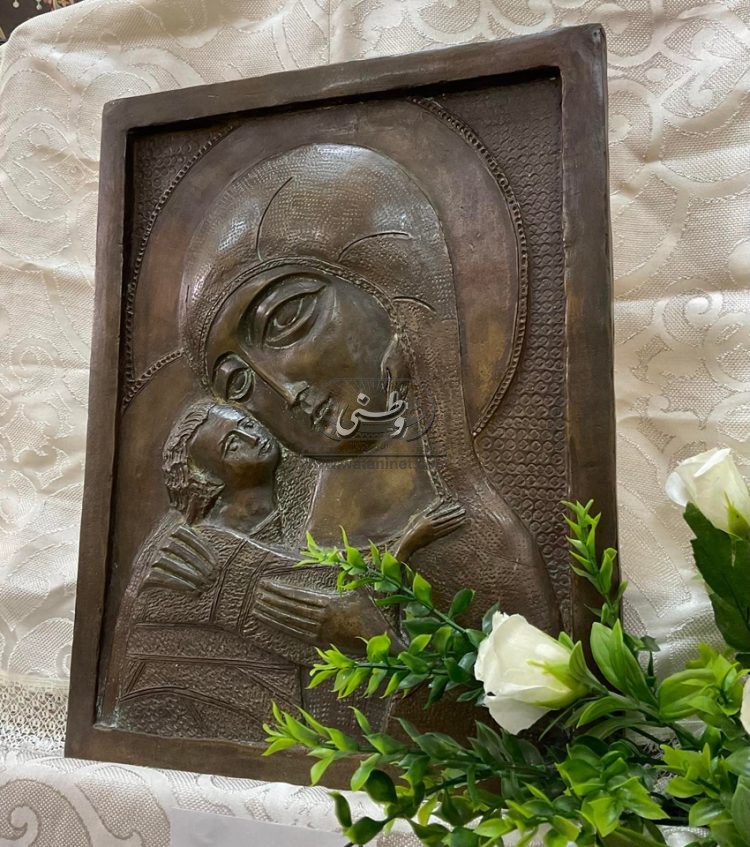 “In order to document this important event,” Dr Agban said, “and for everyone to keep a copy of the beautiful artwork displayed here, the Lithuanian Embassy has printed a brochure showing pictures of the bronze icons as well as a one of the icon of Anba Antonios, Father of Christian monasticism in the world.”

For his part, Lithuanian Ambassador started by informing the audience that the date 13 January marked the 31st memory of 14 Lithuanian martyrs who had the courage to stand unarmed before Soviet tanks in 1991 to defend the independence of Lithuanian institutions; for this they lost their lives. “This exhibition,” he said, “celebrates many saints who gave up the world and laid down their lives for Christ.”

He thanked Pope Tawadros and Dr Agban for their keenness to hold the exhibition which he described as a great cultural event. 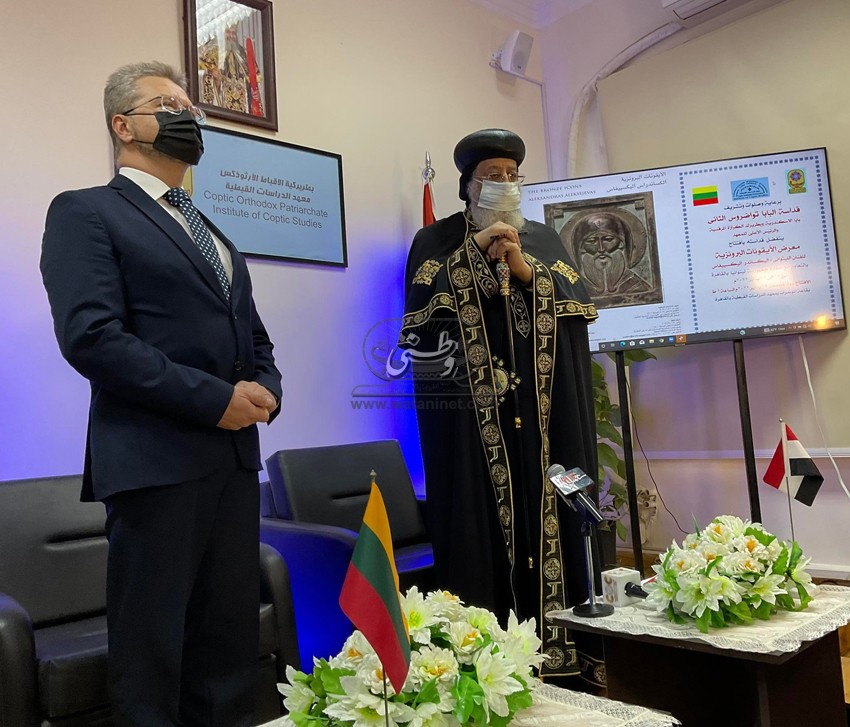 Pope Tawadros gave a word in which he described icons as a powerful means of expression of Christian life; “icons represent pages of the extended history of the Church,” he said. “They address everyone, grownups and children, the educated and the less educated, conveying the image of profound holiness throughout Church history.”

The Pope expressed his happiness with the cooperation between Lithuania and the Coptic Church, welcoming Mr Aleksejevas, and thanking the Lithuanian Ambassador under whose initiative the exhibition was held. 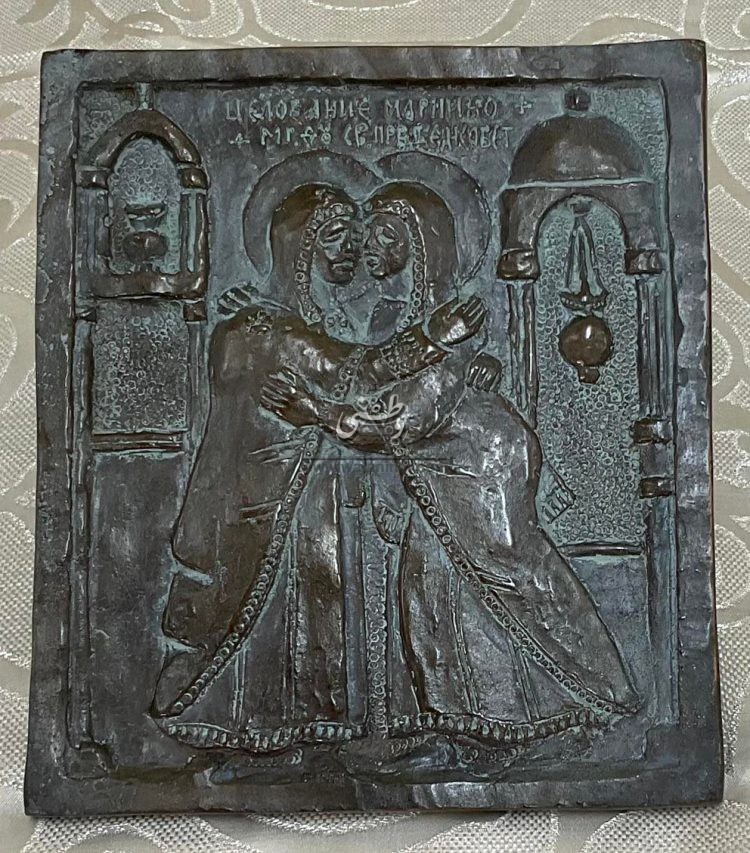 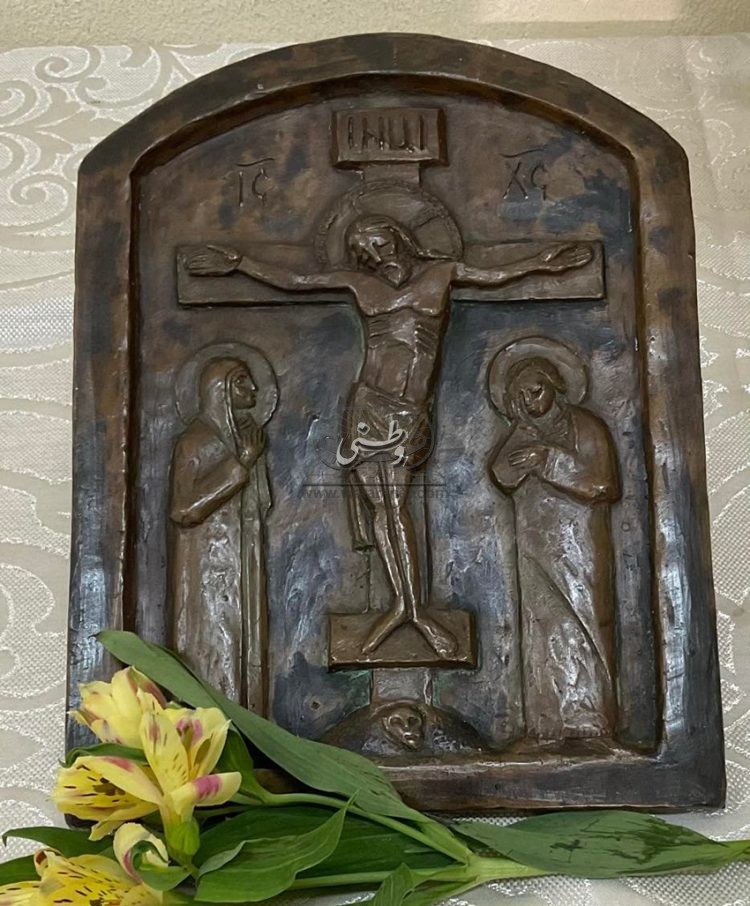 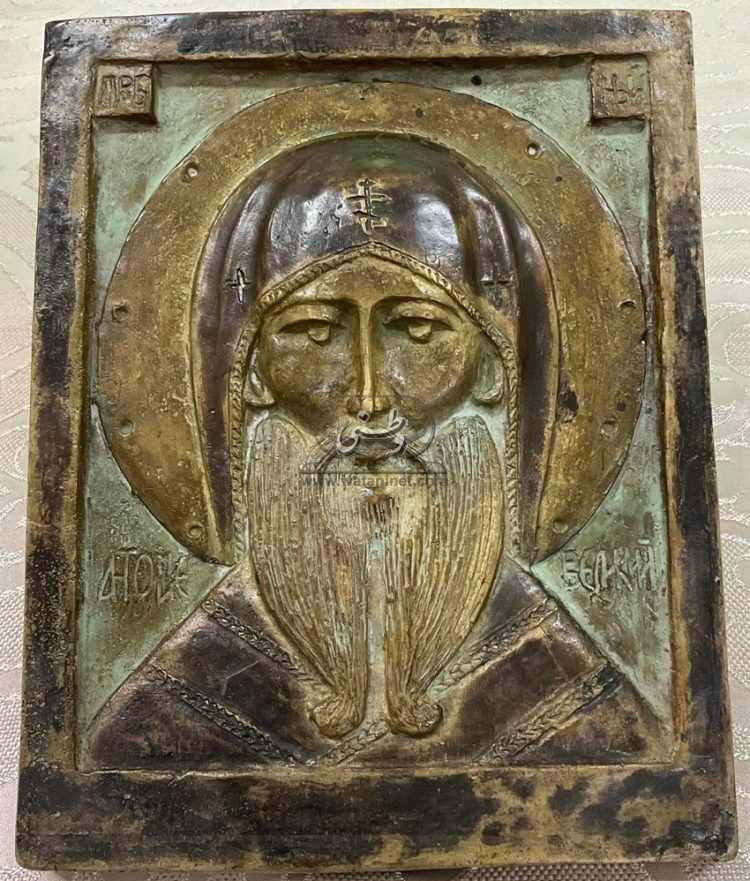 Mr Aleksejevas reiterated by thanking Pope Tawadros for hosting the exhibition, saying that it had been difficult to hold the exhibition because of COVID-19, “but the Holy Spirit guided and arranged for that feat to be achieved now.”

Watani talked to Mr Aleksejevas who said that he had read about saints and martyrs of the Coptic Orthodox Church, and believed they had a live impact on the Christian world, hence his desire to depict them. He made reference to St Anthony the Great, Anba Antonios the Father of all Monks, who influenced his spiritual life side-by-side with other saints of the West.

The artist said he was grateful for the help of the Lithuanian Embassy in arranging for the exhibition, saying that there had been special difficulty because of the heavy weight of the bronze artefacts. “But the Embassy helped in every way possible, also with contacting the Pope and ICS and organising the exhibition.”

Mr Aleksejevas said he made his first bronze icon some 20 years ago; it was one that depicted St Nicholas. He said that, in order to depict a saint, he studies his character, outlines his features, defines the symbols to be added to the icon, then executes it in bronze. Under the influence of the saint Mr Aleksejevas said, the artist reaches a mental image of the artefact he intends to produce, with details such as the face expression of the saint, the angle of the head, or the position of the hands, all coming into focus. 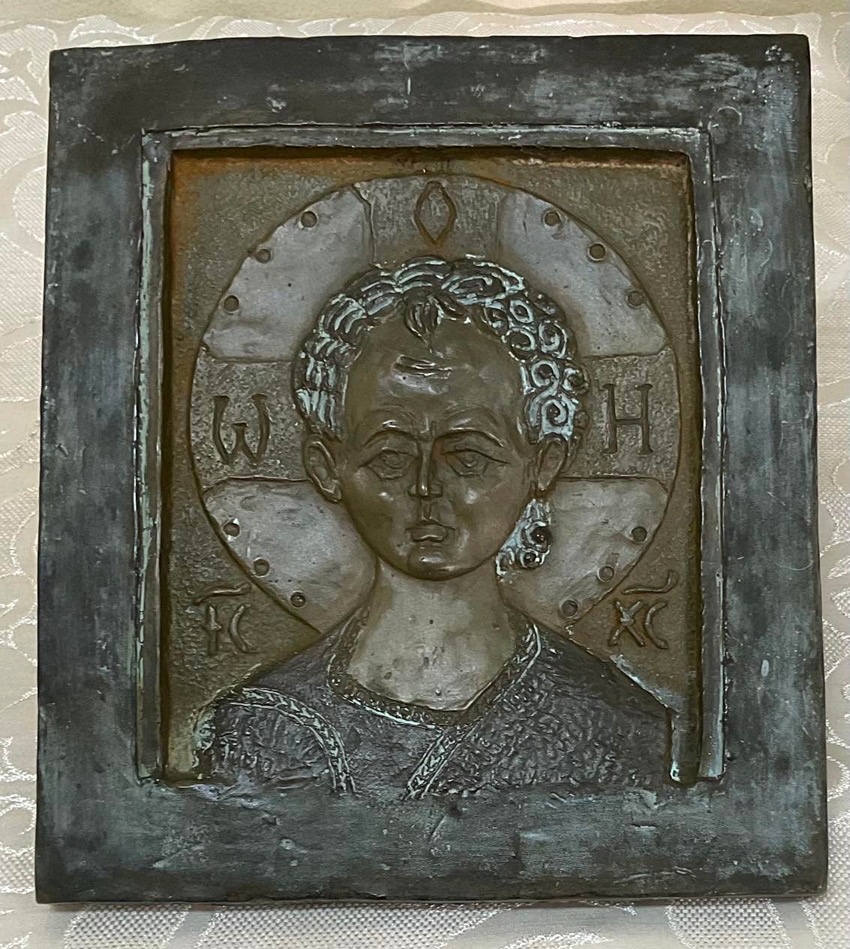 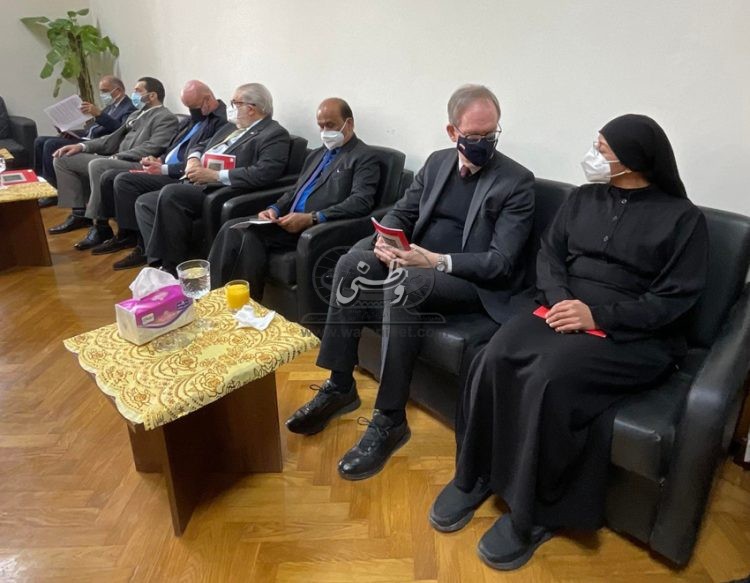 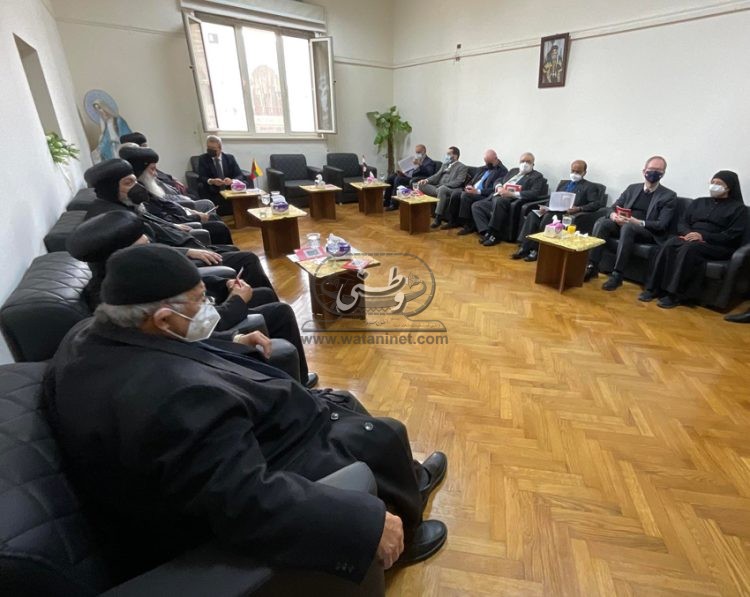 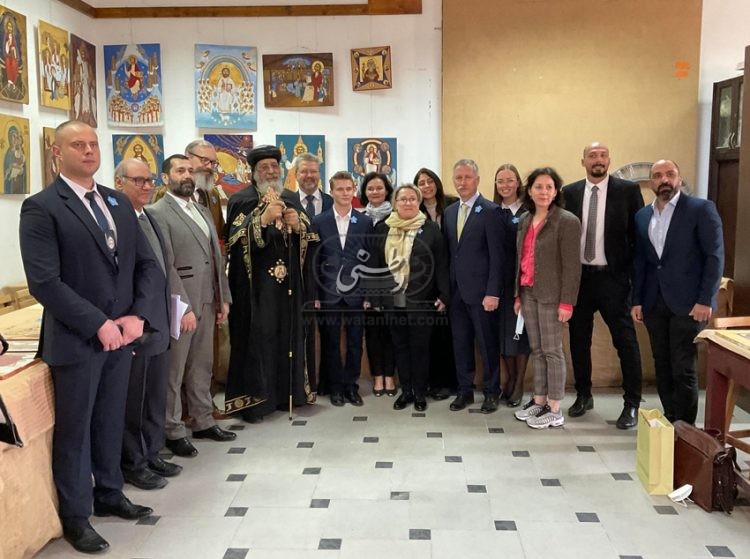 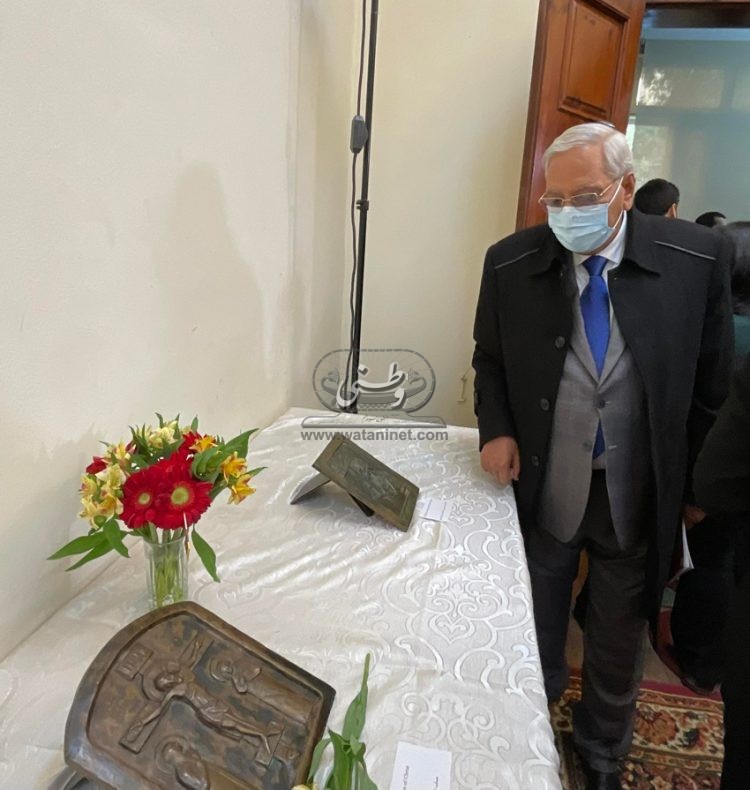