Maggie Gobran, fondly known in Egypt as Mama Maggie, a pioneer of volunteer work among Cairo’s garbage collector community through the NGO Stephen’s Children which she founded for that purpose, has been honoured with the Charles W. Colson Courage and Conviction award from Biola University in La Mirada, California. On its website, the university posted:

“The committee wanted to honour ‘Mama’ Maggie’s conviction and courage in caring for tens of thousands of children and their families in the slums and squatter areas of Egypt through her organisation, Stephen’s Children,” said Corey. “She has made a remarkable contribution through her service to Coptic Christians struggling under heavy persecution.”

Recipients of the Colson Award have chosen a life of serving God no matter what challenges they face or difficulties they have to overcome. President Corey expressed his appreciation for her service on behalf of Biola.

“Mama Maggie, you are an inspiration of courage and Christian virtue to all of us,” said Corey at the ceremony. “Thank you for your willingness to take up your cross and follow Christ. Thank you for modelling a strong, humble spirit of Christian service. Thank you for making such a difference in so many lives for the cause of Jesus Christ.”

Since 1989, Gobran has dedicated her life to serving the poor and forgotten children in Egypt’s garbage slums through her organisation. She grew up in an upper-middle class family and eventually became a successful businesswoman and professor at the American University in Cairo. However, she gave up her career after she saw children were living in abject poverty and persecution and decided to serve them.

“The most powerful weapon is the weapon of nonviolence,” said Gobran, upon accepting the Charles W. Colson Courage and Conviction Award. “Biola will stand out. You are standing out. Keep it up for courage and conviction.”

Gobran’s organisation is dedicated to building relationships with the poorest and most vulnerable families in Cairo. She has built 97 community medical centres and schools in the garbage slums and serves over 40,000 children and their families. Everyday, the Zabaleen, or “garbage children,” are morally, educationally and spiritually equipped to serve the world for God through the ministry of Stephen’s Children.

Biola University—in consultation with the Colson family—established the Charles W. Colson Conviction and Courage Award in 2014. Christian leader Chuck Colson lived a life of biblical conviction with the courage to advocate truth despite difficult circumstances. Biola honoured the legacy of the late Colson by awarding him the inaugural award at the university’s commencement in May 2014. Colson’s son, Christian Colson, received the award on his father’s behalf at the ceremonies. The award honours Colson’s legacy and celebrates Christian leaders who live in the same fashion. 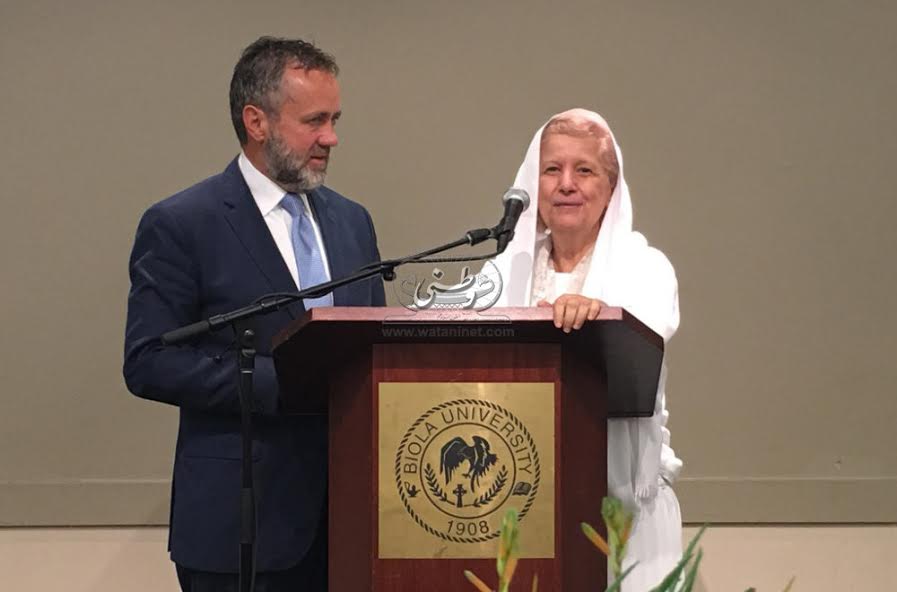