Given that Watani International is this year marking 20 years in print—our first issue was printed on 18 February 2001—we have promised our readers to publish every month a review of our issues during that time, year by year. We already reviewed the issues from 2001 to June 2013; today we keep good on our promise by covering July – December 2013. These were the months that followed the massive 30 June 2013 Revolution which led the military to intervene and rid Egypt of the post-Arab Spring Muslim Brotherhood (MB) regime. Egypt won the battle for her Egyptianness which the MB had attempted to wipe out by veering towards Islamism and cancelling all tenets of the democracy that had brought them, albeit with a very thin margin, to power.

2013: Egypt rids herself of Islamist regime

On 3 July, Egypt’s Head of the Constitutional Court, Justice Adly Mansour, was sworn in as Interim President, and Egypt started its march towards a new constitution and electing a new president.
On 7 July 2013, Watani International came out with the headline “New age for Egypt”.

The jubilation of Egyptians, however, was obviously lost on the western world which saw the entire situation as no more than a coup d’état that overthrew a freely elected president and brought in military rule. Watani International published a series of articles explaining that the military, led by General Abdel-Fattah al-Sisi, had moved to save Egypt from civil war and lead it towards a civil, secular State; and had responded to Egyptians’ desire to overthrow a regime that had come on the wings of democracy, but then made it its business to ensure there would be no more democracy, meaning it could never give up power peacefully or democratically. But that view was obviously lost on the West.
Watani International printed under the title “When a coup is not a coup” on 14 July 2013: “Obviously, the MB were not leaving Egypt without a fierce fight. So, while the world at large appears to see nothing in Egypt but ‘coup’, ‘legitimacy’, and ‘democracy’; Egyptians see something else as their top priority: ‘survival’. The millions of Egyptians on the streets have vowed to fight against the dark forces that wish to bring Egypt down and blot it off the map of human civilisation. In the process, Egyptians will regain the democracy they have been robbed of by Mursi and his Islamists.” 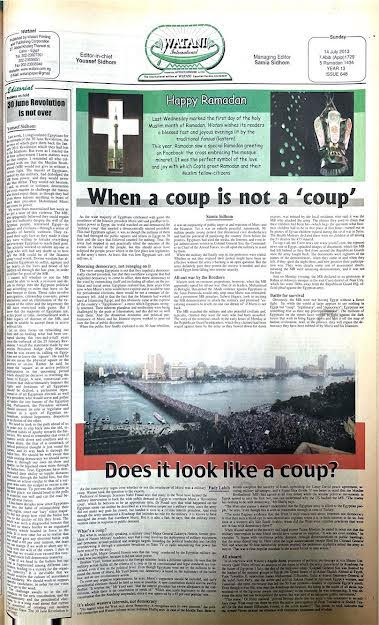 When a coup is not a ‘coup’

To add insult to injury, the western media was reporting many false news on Egypt, which Watani International refuted and analysed one by one in an article “Double standards by any other name” printed on 18 August.

Excessive western interest in favour of the Islamists leads Egyptians 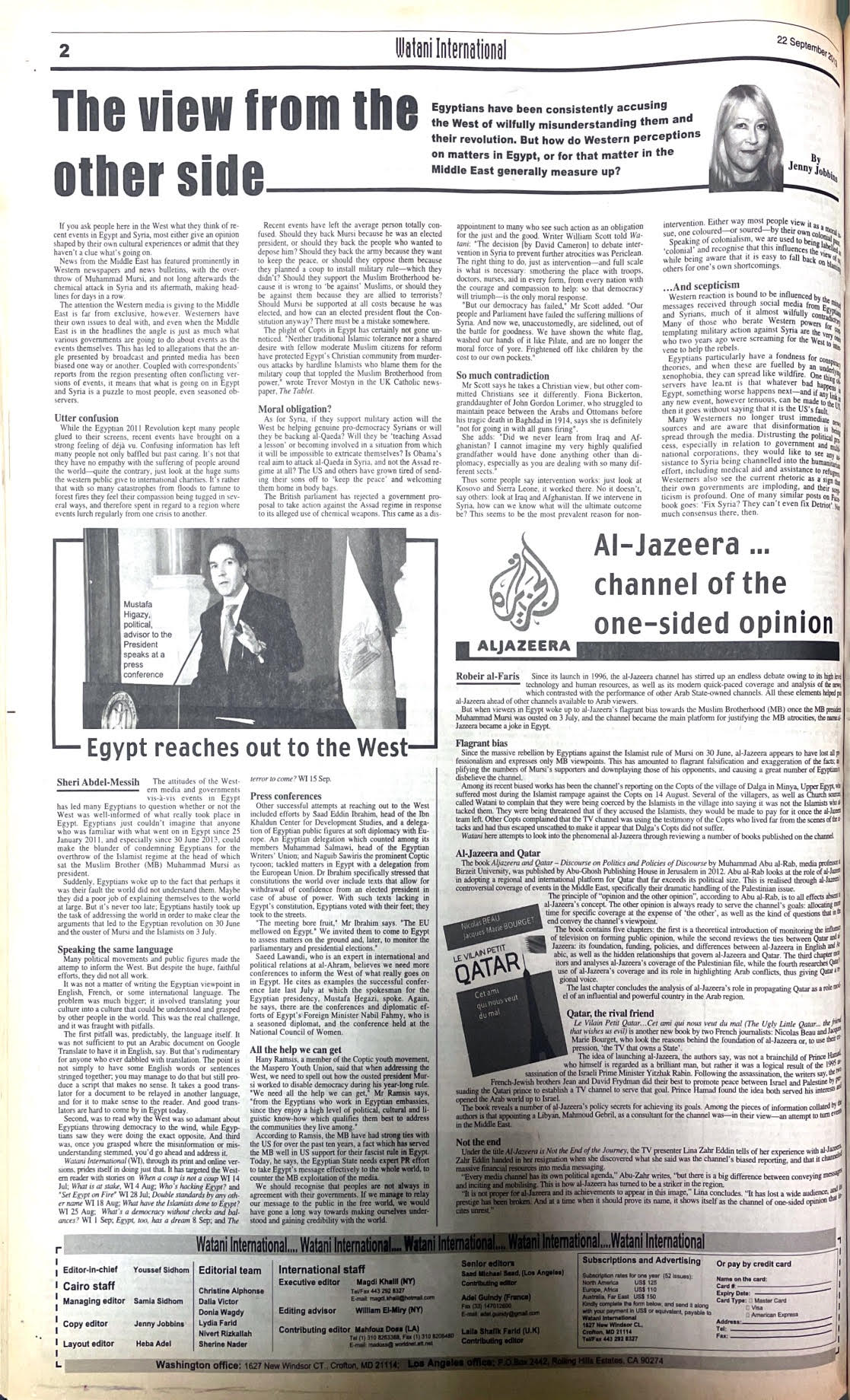 And in an attempt to be objective, Watani International published an article on 22 September by our British then copy editor Jenny Jobbins, titled “View from the other side”, explaining the confusion of westerners on what was taking place in Egypt.

The MB, for their part, promised to “set Egypt on fire”. Their leaders took to hurling ominous threats at Egyptians if Mursi was not re-installed; Sheikh Safwat Higazy, one of their top men, explicitly vowed that Egyptians “would see terror they never dreamed of”. And true to their word, they did wage terror in all forms and against all Egyptians: civilians, police, and military.

The Muslim Brothers vow to: 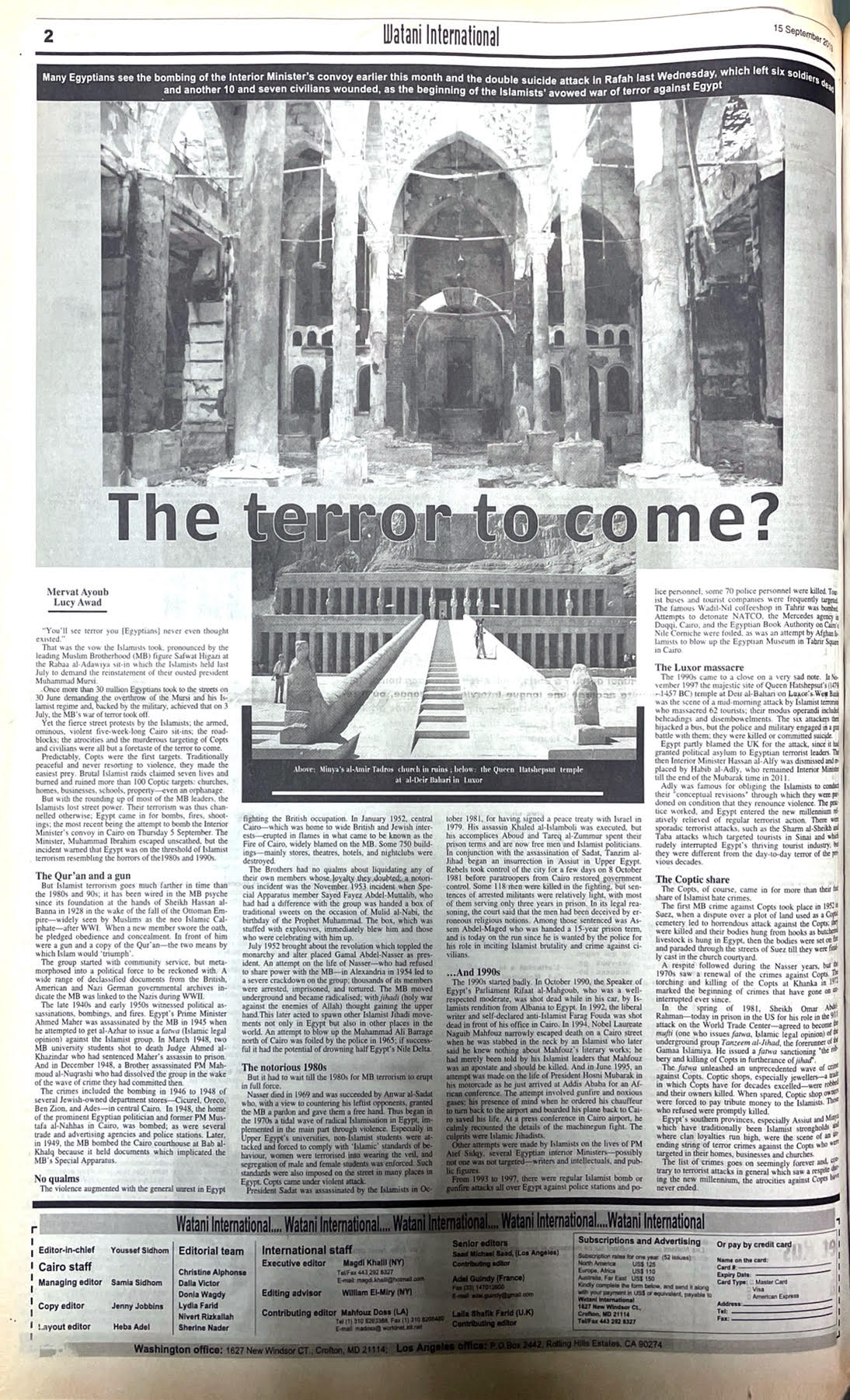 The choicest MB terror, however, was predictably reserved for the Copts. The first few days in August saw Copts in Assiut cruelly harassed; in Beni-Ahmed, Minya; and in Diabiya, Beni Sweif; they were attacked and their homes and property burned for frivolous reasons. 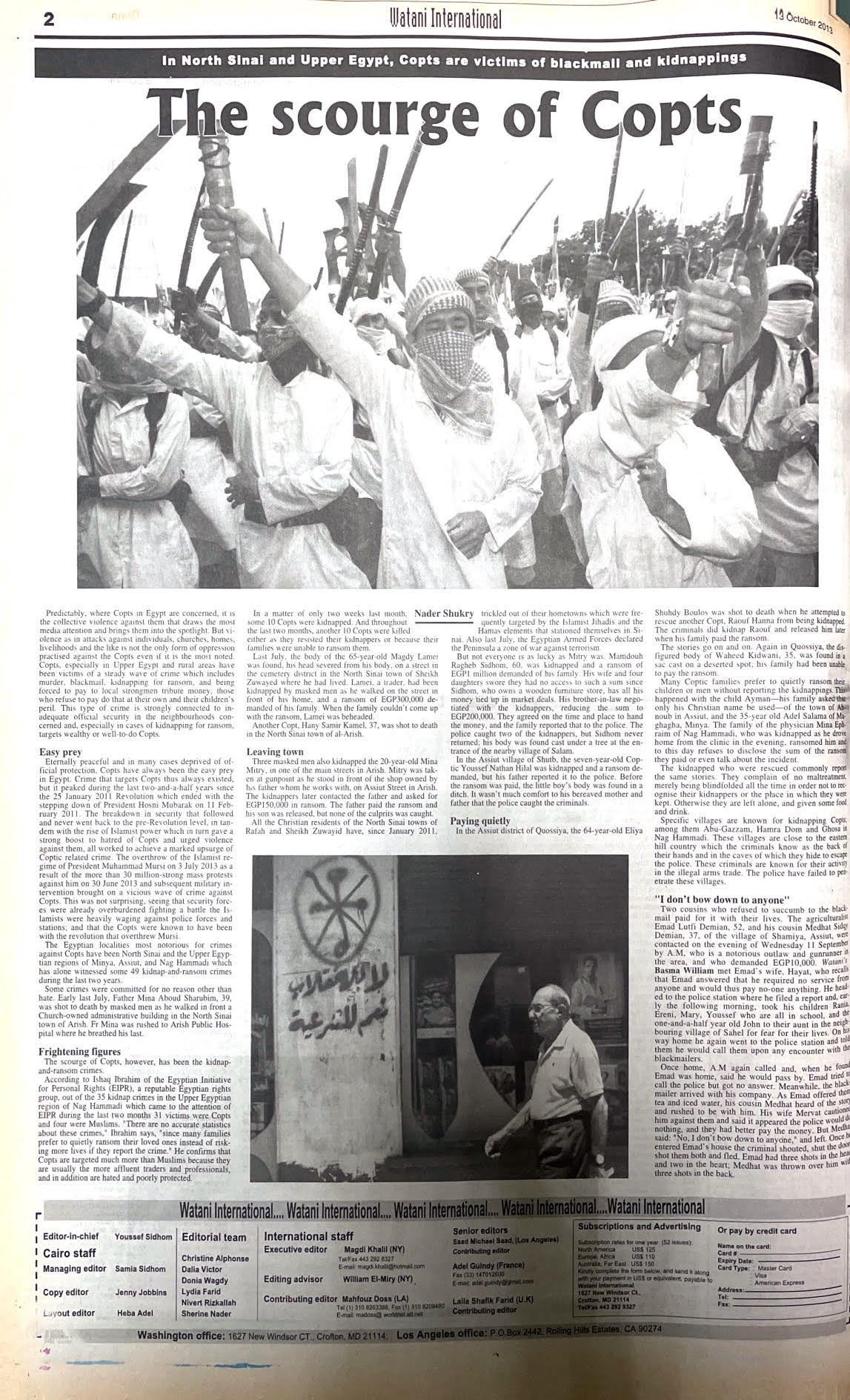 During the first week of July, MB supporters staged two sits-in, one in the east Cairo square of Rabaa al-Adawiya, and one in Giza’s Nahda Square. Their numbers swelled; the men were joined by women and children; they were heavily armed and spearheaded violent demonstrations; to say nothing of the terror they spread among the districts’ residents. Egyptians cried out for the government to disperse the MB crowds, and the government called on them to leave peacefully. When this call went unheeded, the government threatened it would break up the sit-in by force. Finally, on 14 August, the police broke up the gathering but only after a bitter fight. According to the Egyptian Health Ministry, 595 civilians and 43 police officers were killed and at least 3,994 were injured.
Just as the police raid took off at dawn that day, nationwide synchronised terror attacks were waged by MB supporters against Copts, their churches, homes, property, schools, orphanages, and clinics. Some 100 Coptic homes and establishments were attacked, and six men lost their lives. All the attacks followed the same pattern of hate, violence and destruction; at the same time, horrendous attacks were waged against the police; meaning that they could do nothing to defend the Copts.

Report on the attacks against Copts on 14 August

The infamous attacks were reported in Watani under the titles: “Copts pay the price” on 18 August, and “Avalanche of hate” on 29 September. 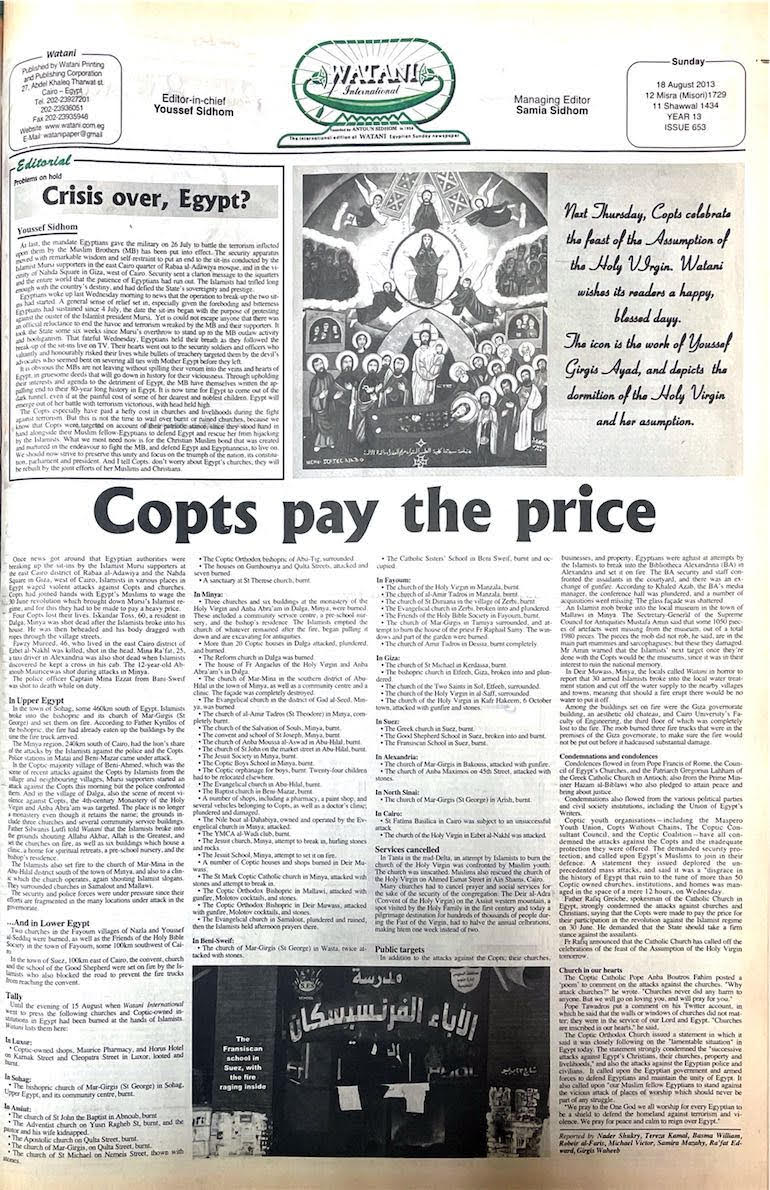 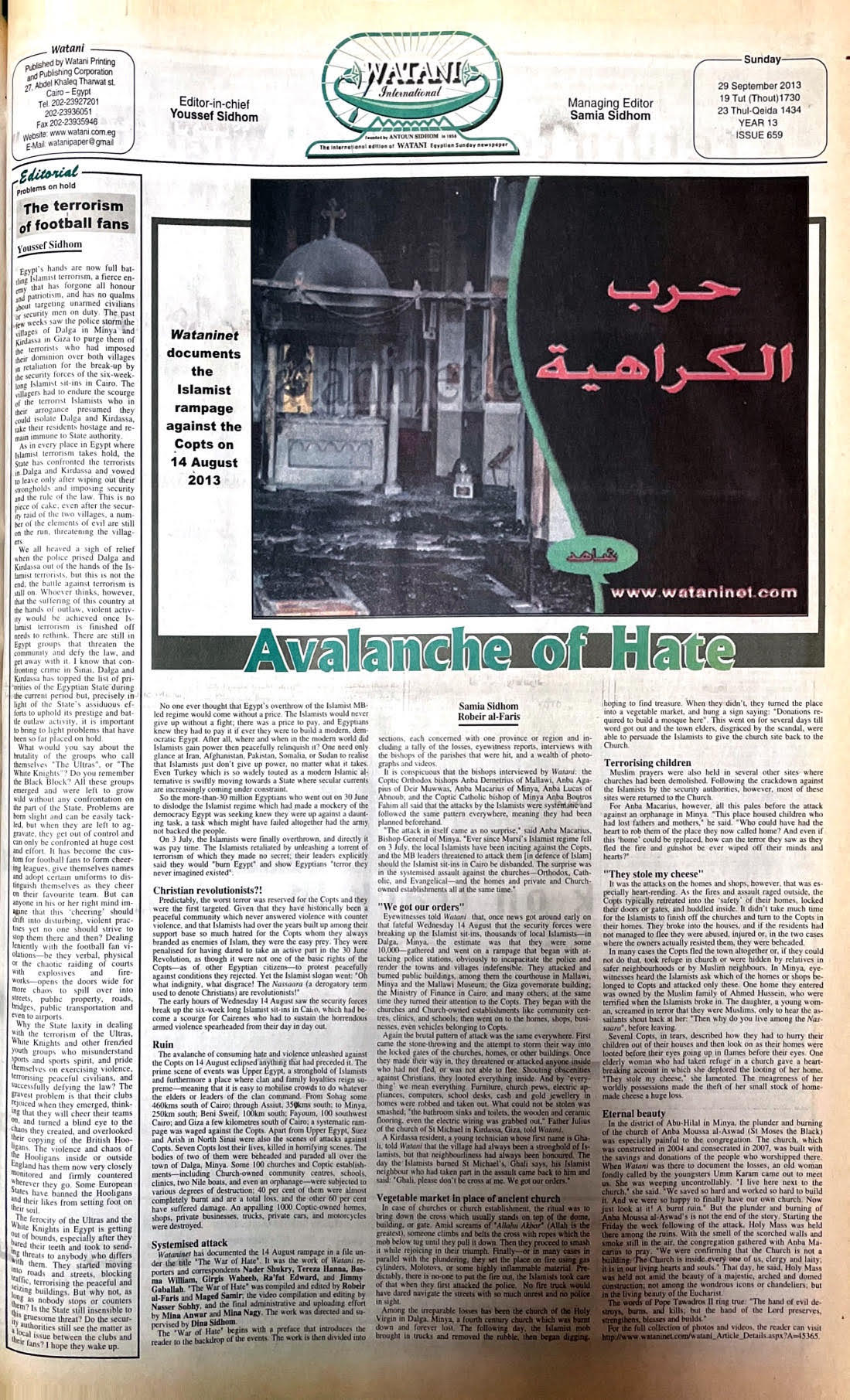 The MB violence against Copts did not stop there and then. Other attacks occurred, among them a motorcycle shooting against Copts lingering outside a church in Warraq, Giza, to attend a wedding; four Copts died, 18 were injured. 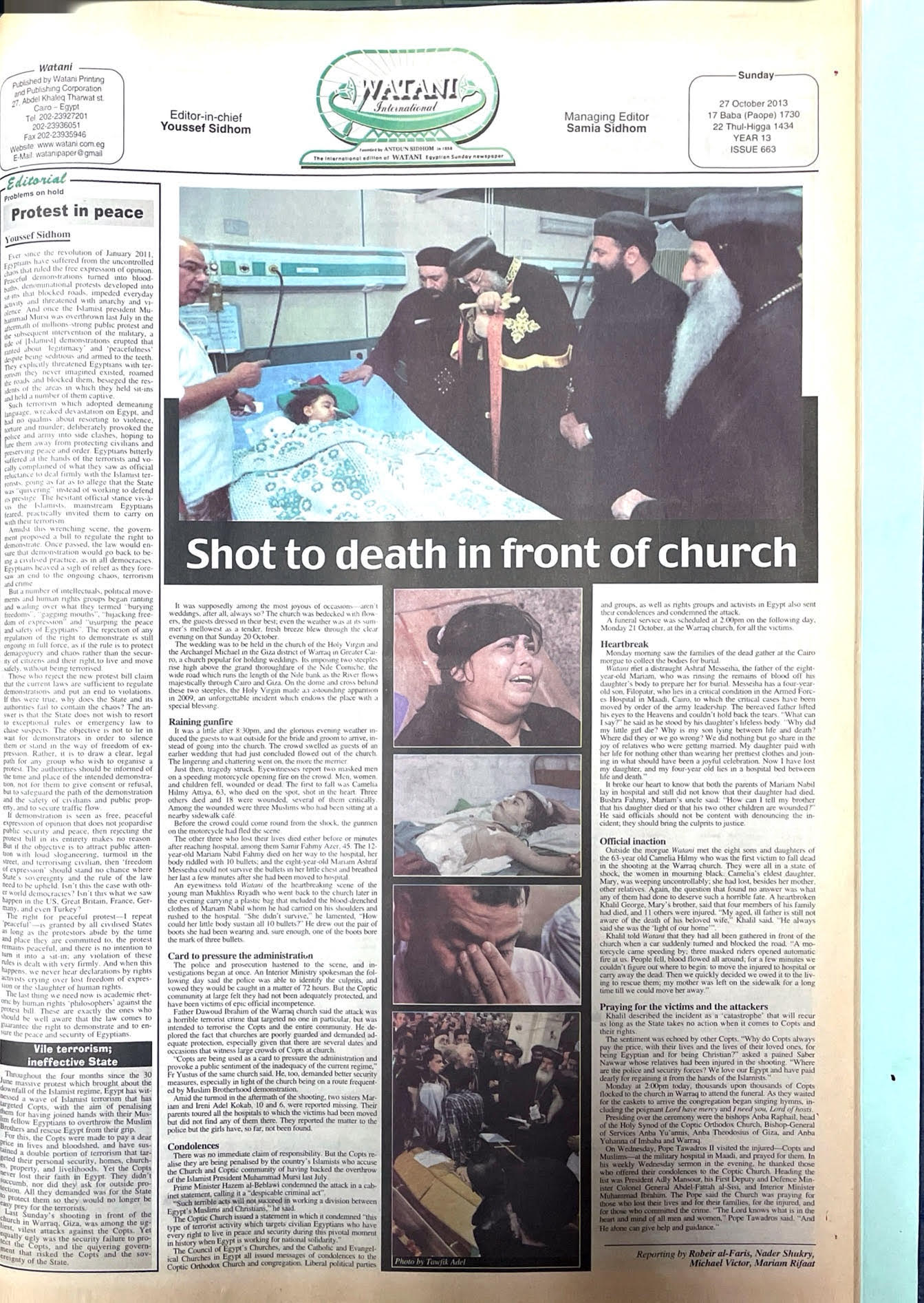 As Egypt struggled against the terror attacks and destabilising efforts of remnant Islamists, the country strived to rebuild what the Islamists had attempted to destroy during their year in power. The new Egyptian government worked to bring about safety, security, and stability; also to put the economy back on its feet. This latter task could never have been achieved if not for generous contributions by Arab countries including Saudi Arabia and the United Arab Emirates. 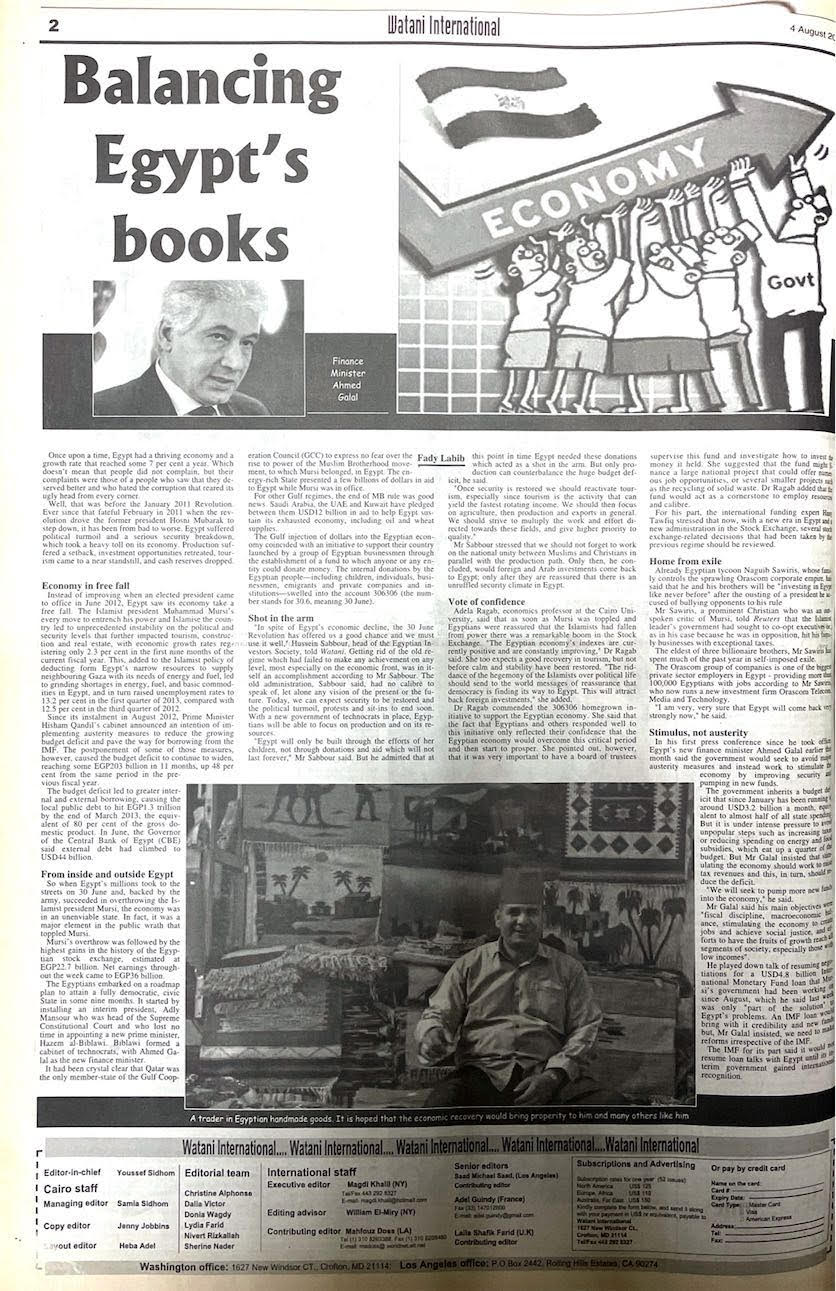 A new Constitution was being written, a task undertaken by the Committee of the Fifty, which included representatives of all sectors of Egyptians. Chief among those representing the Church was Anba Pola, Bishop of Tanta, who was interviewed by Watani’s Nader Shukry on the charter and the predicaments of its drafting. The interview was published in December 2013 under the title “The nuances of writing a Constitution”.

The nuances of writing a constitution

In the meantime, Egypt jubilantly celebrated its regained cultural identity.
In October 2013, the Cairo Opera House celebrated its silver jubilee. The event featured a spectacular show, aptly named “The Ship of Light”. It was an epic amalgam of music, poetry, song and dance that exuberantly celebrated a new lease on life for the opera and musical arts following the MB subversion. 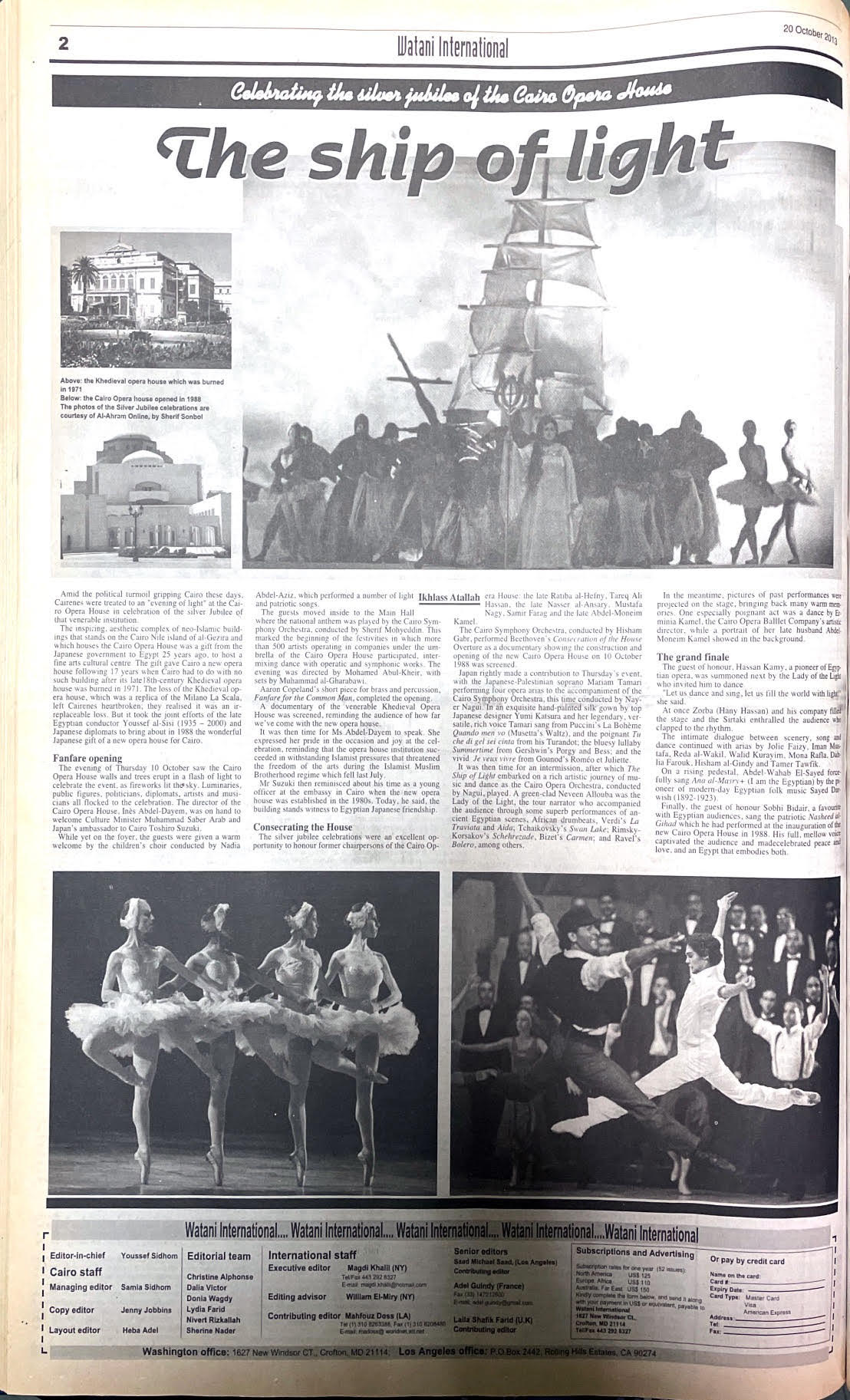 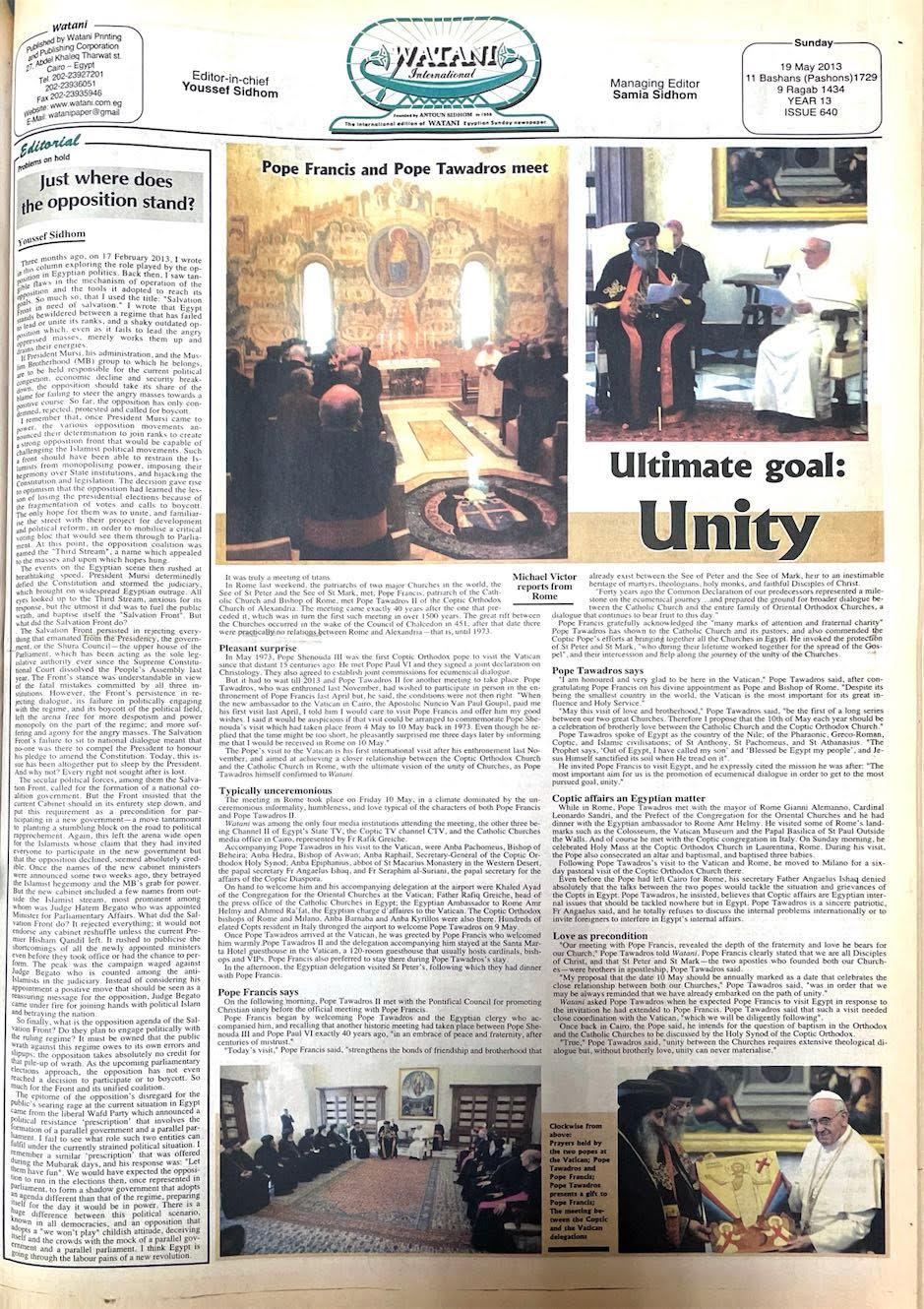 The meeting was dominated by the love, humbleness and warmth that characterises the two men, and marked the start of a new era of warm relations between the two Churches.

Watani’s Victor Salama conducted two interviews with Pope Tawadros, one in February titled “The two-millenia-old Church enters the 21st century; the other in September titled “A new Egypt is born”. 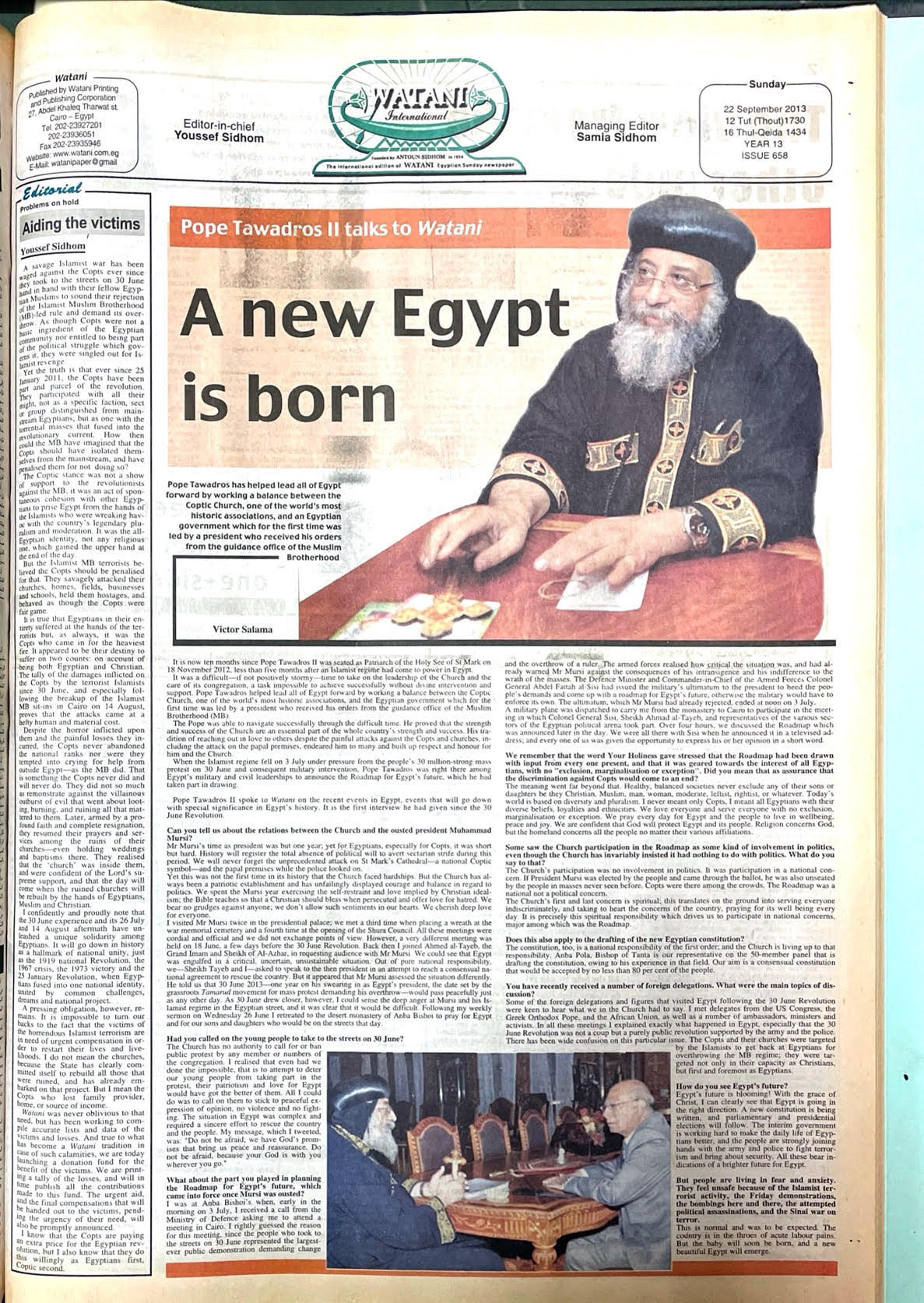 Mr Salama also reported in depth on the manuscript library at the Western Desert monastery of Deir al-Surian, and the meticulous restoration project taking place there. 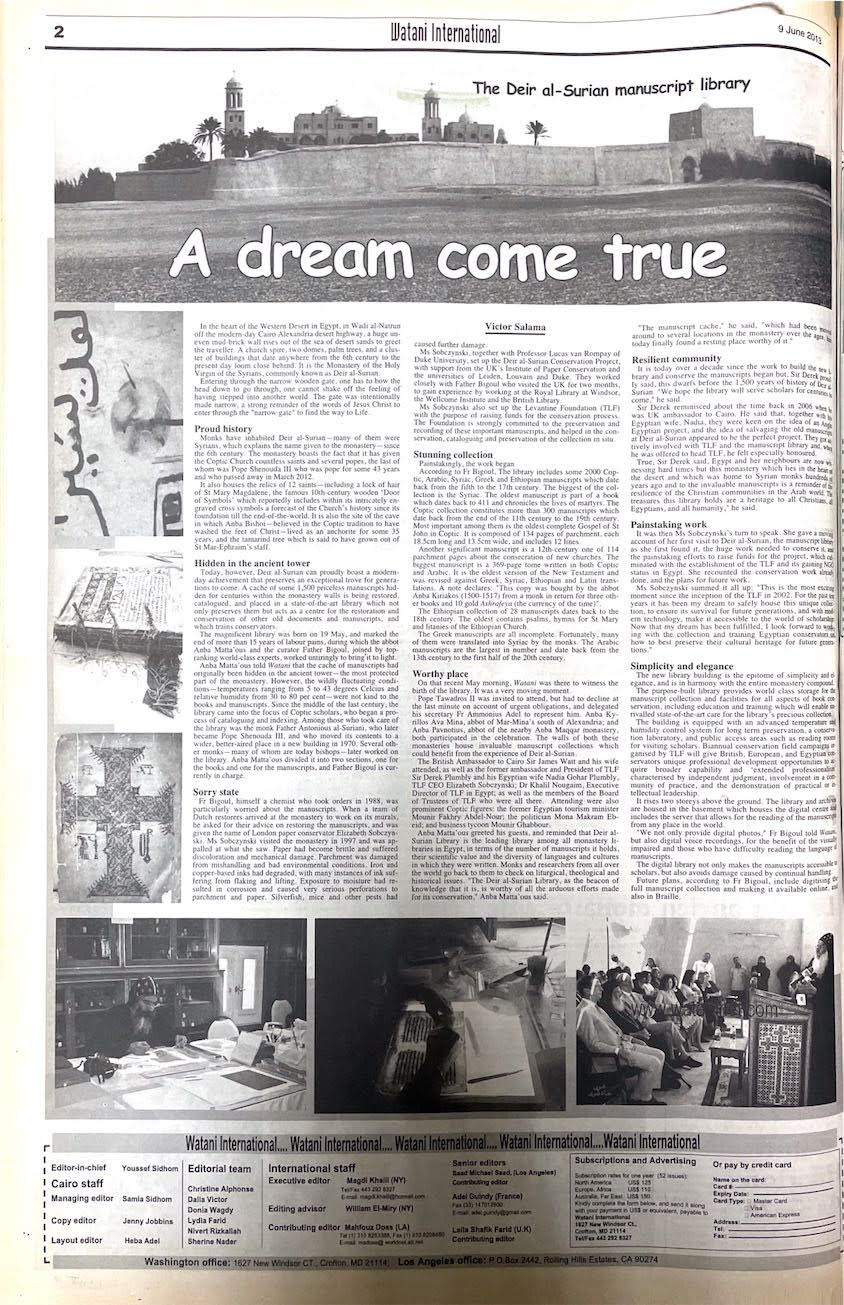 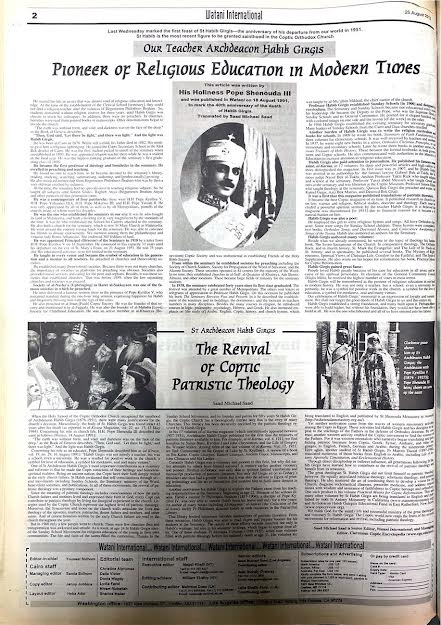 Watani International reported on a number of luminary figures who passed away in 2013; publishing coverage of their lives and achievements. Among them was Ola Ghabbour (1960 – 2013) who founded the Children’s Cancer Hospital 57357 in Cairo which offers world-class free treatment to children indiscriminately; 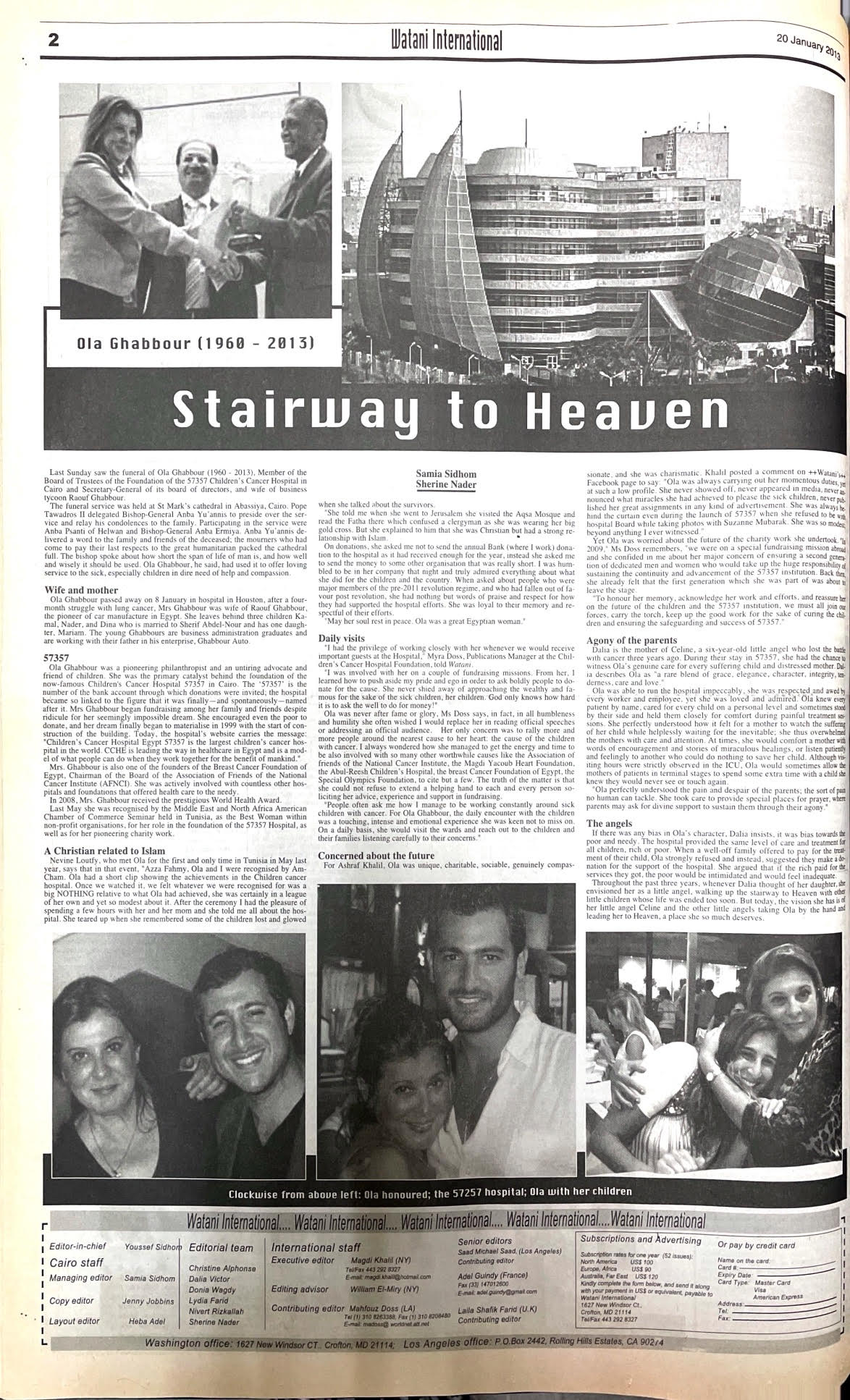 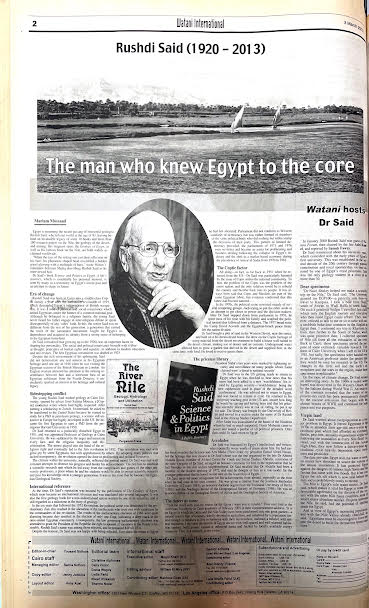 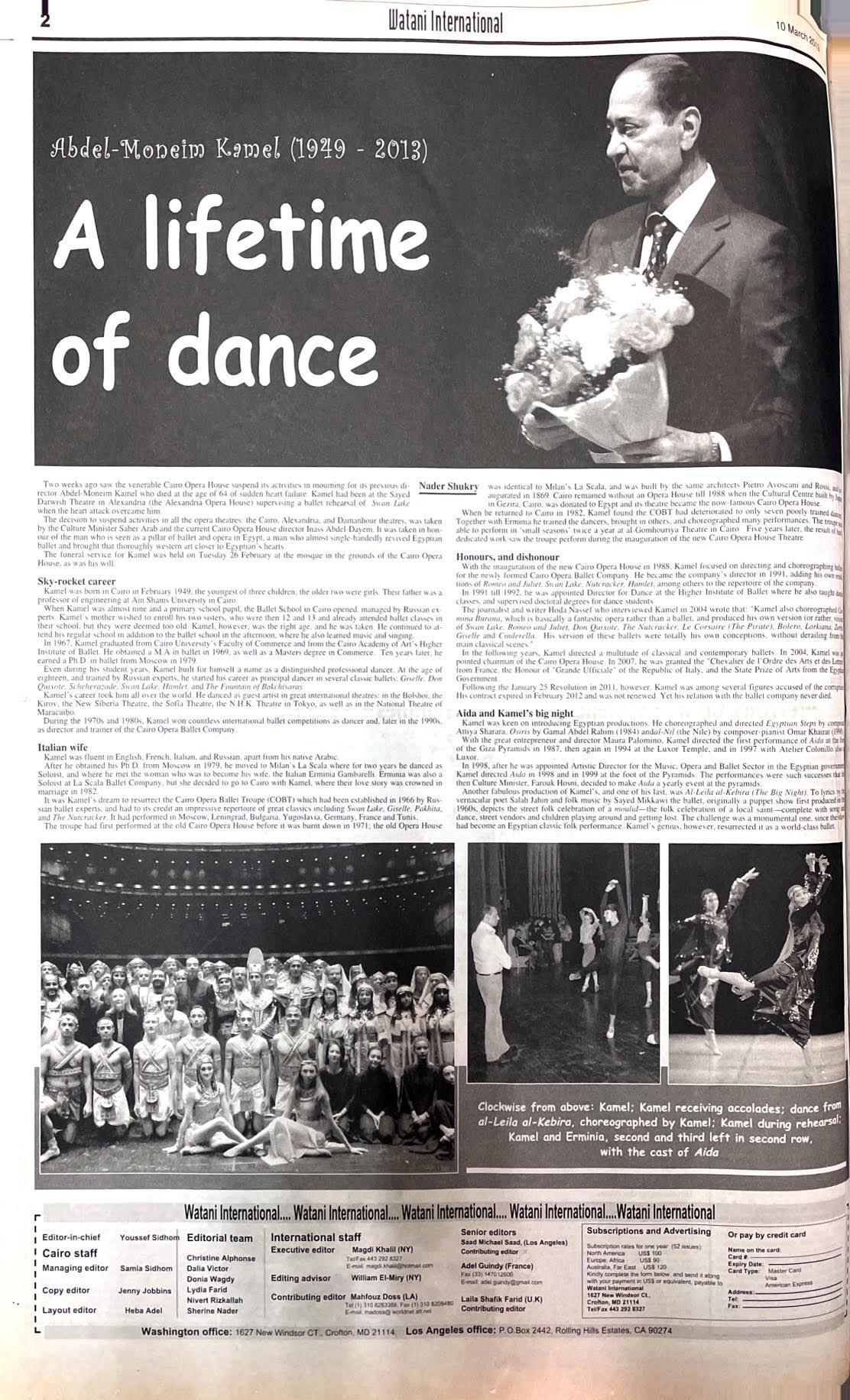 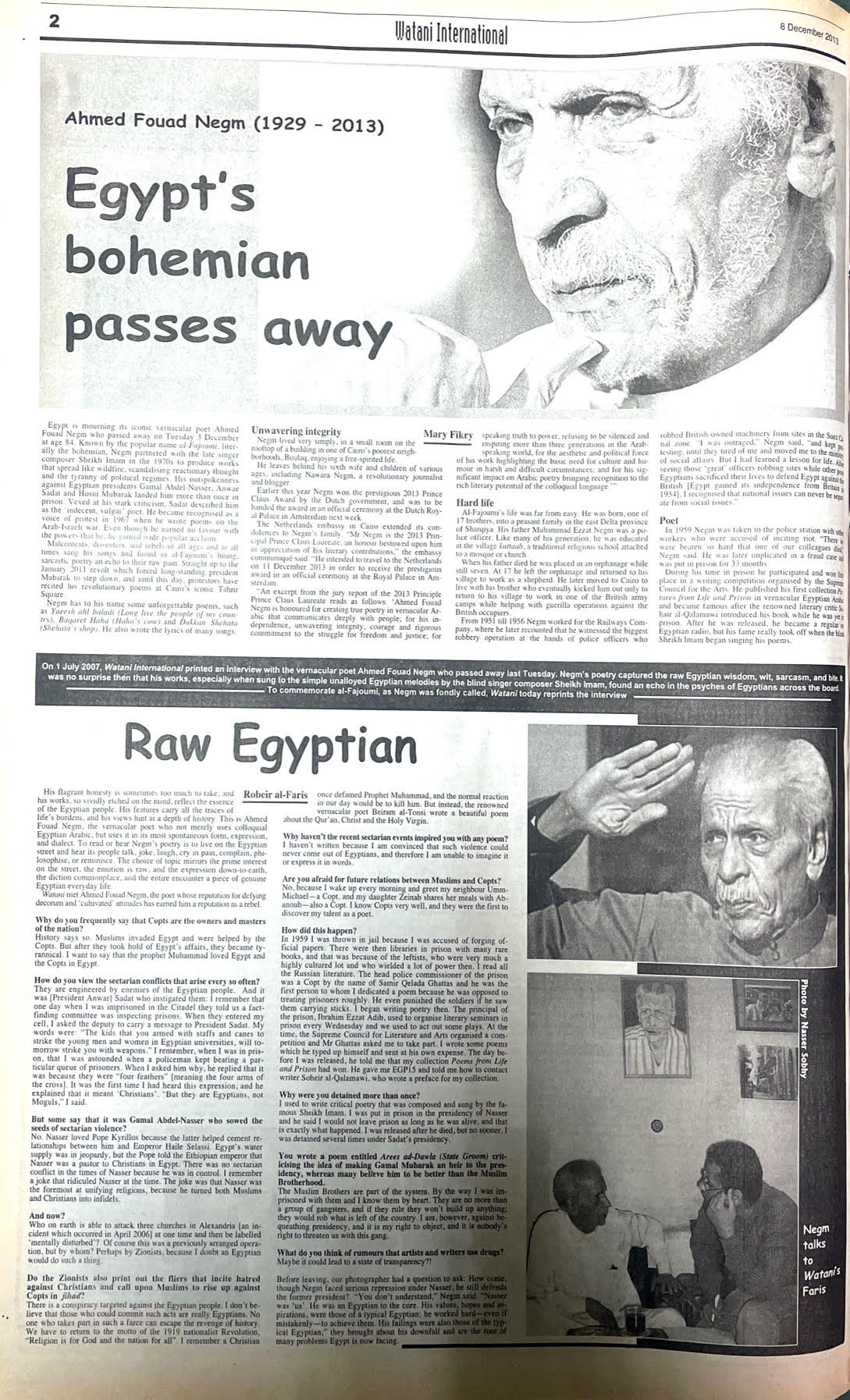 The year came to a close with Egyptians preparing to vote on the approval of the new Constitution that confirmed Egypt as a civil State. The Preamble read:
“This is our constitution
“Egypt is the gift of the Nile to Egyptians, and the gift of Egyptians to humanity.
“It is the heart of the world, by virtue of the originality of its location and history. It is the meeting point of cultures and civilisations. It is where Africa heads into the Mediterranean, and where the Nile flows to its mouth.
“This is Egypt, a timeless homeland for Egyptians; and a note of peace and love to all people.”
An Egyptian American wrote to Watani: “The splendour of the language of the Preamble has warmed my heart. We should be proud of ourselves, wipe our tears, stop beating our chests and move on to confidently meet the ever-young new Egypt waiting to embrace us again.”

Voting Egypt into the future 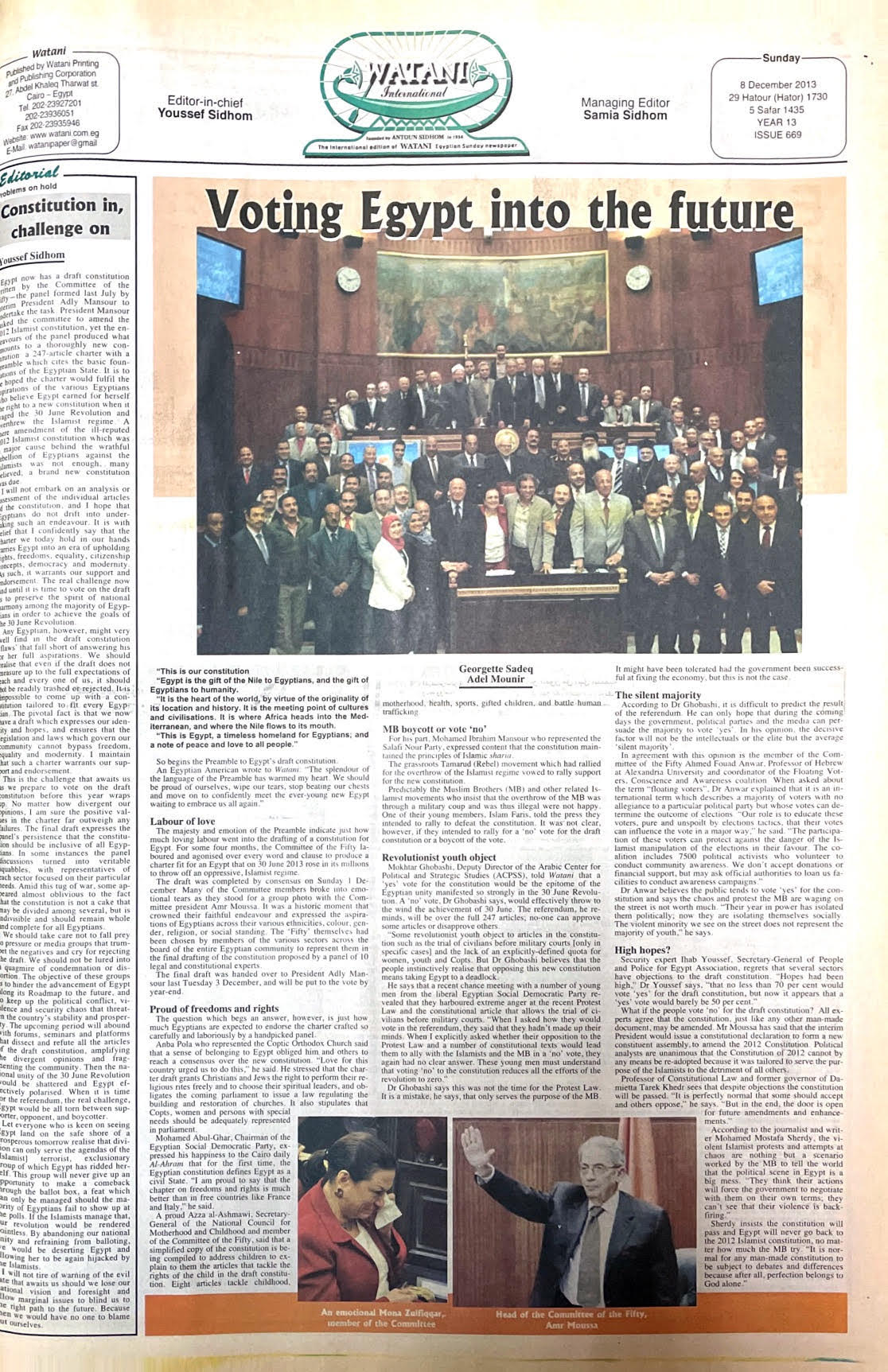 On 5 January 2014, Watani International carried the headline of an article by Youssef Sidhom “A new dawn for Egypt”.