A funeral service was held at noontime 15 October for Anba Karass, Bishop-General of al-Mehalla al-Kubra, at St Mark’s Cathedral in Abbassiya, Cairo. Pope Tawadros presided over the service which was attended by two Metropolitans and 36 Bishops of the Coptic Orthodox Church’s Holy Synod. Also attending were members of the priest assembly of Mehalla and a large congregation.

Anba Karass (1958 – 2021) passed away on 13 October 2021, on account of a COVID-19 infection. He was mourned by Pope Tawadros II and the Holy Synod in a statement which declared that the venerable Bishop had departed our mortal world for the joy of Eternity, leaving behind a precious legacy of dedicated service and faithful pastoral work. Anba Karass, the statement said, possessed purity of heart and a simplicity that dominated whatever he did or said, so that his words had great effect on the hearts and souls of all who heard them. “We are confident that he is blessed, according to the Lord’s promise ‘Blessed are the dead who die in the Lord from now on. Yes, says the Spirit, that they may rest from their labour, and their works follow them. (Rev 14:13).” 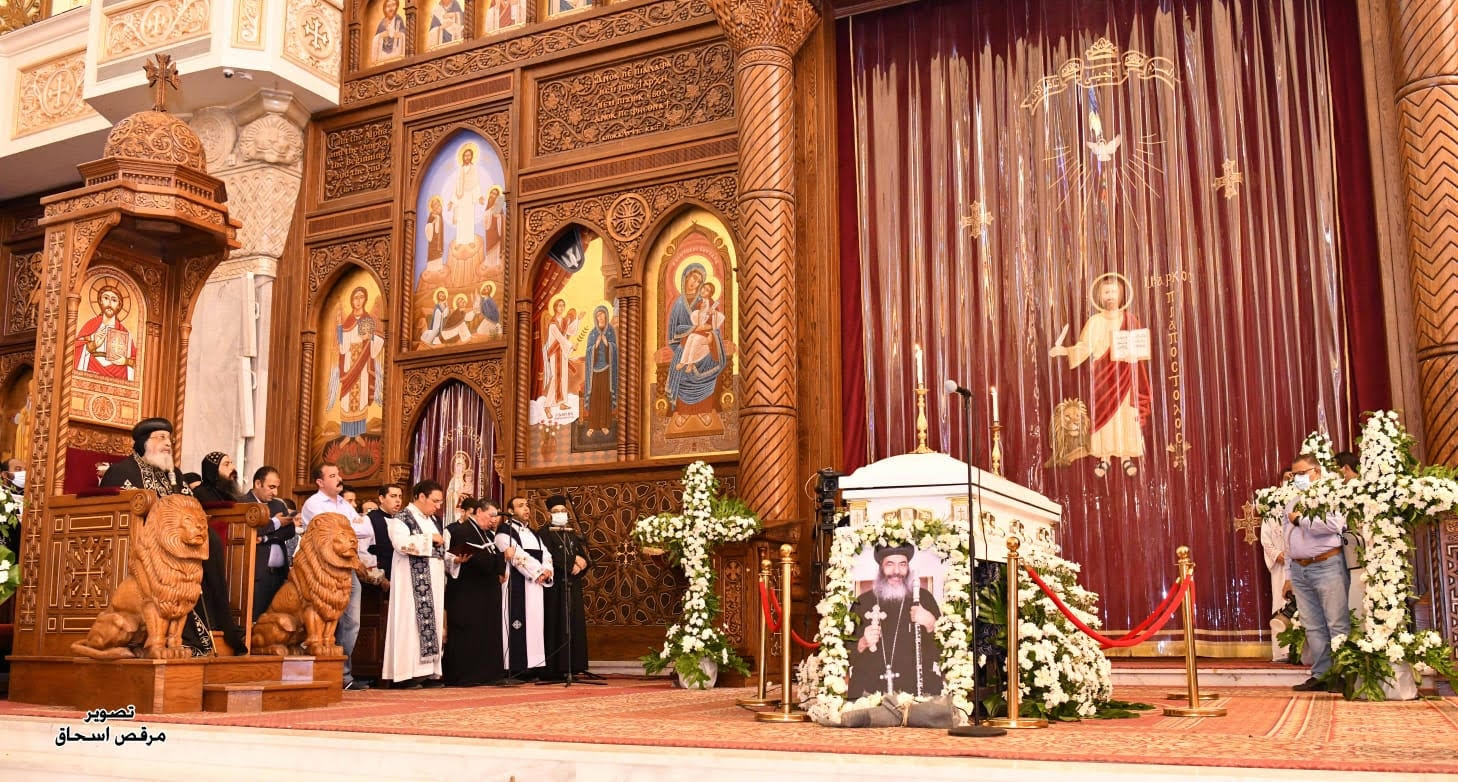 The Pope and Holy Synod offered condolences to the priest assembly of Mehalla, its congregation, and the family and friends of Anba Karass.

Given that Anba Karass had been deputy to Anba Pimen, Metropolitan of Naqada and Qous, from 1991 to 2013, another funeral service will be held for him on the evening of Friday 15 October at the monastery of Archangel Michael in Naqada, and Anba Pimen will accept condolences at the church of Mar-Girgis in Naqada on 16 October, and at the church of St Stephen in Qous on 17 October. The dates were announced in a statement by Anba Pimen, headed with the Bible verse: “Then the righteous shall shine forth as the sun in the kingdom of their father” (Matt 13:43). 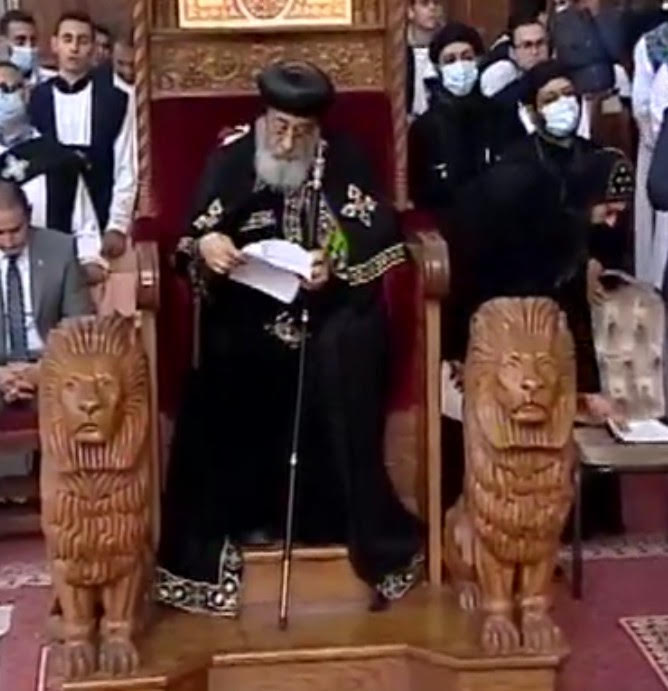 Anba Karass was born in December 1958. He took orders in 1983 at the monastery of St Samuel the Confessor in the Western Desert, some 230km southwest Cairo, and later moved to al-Muharraq Monastery in Assiut some 350km south of Cairo. In 1991 he became deputy to Anba Pimen, Metropolitan of Naqada (some 600km south of Cairo) and Qous, and remained so till he was consecrated Bishop of Mehalla, a Nile Delta province, in 2013.

Anba Karass held a B.Sc degree in Theology and a M.Sc in Church History from the Institute of Coptic Studies, Cairo. He was Assistant Coordinator of the Holy Synod’s Public Relations Committee, and Coordinator of its branch Crisis Management Committee.

Ever since news was out that Anba Karass passed away, social media has been brimming with messages by clerics and congregation mourning him and expressing grief at the loss of this great man. His astounding humility, gentleness, knowledge, and firmness, were highly extolled; as well as his captivating love for all.

Tareq Rahmy, Governor of the mid-Delta governorate of Gharbiya in which Mehalla is located, mourned Anba Karass in a statement, saying that “in his departure we lost a man of outstanding value and stature on the National and religious levels. He possessed great wisdom, sense, and humbleness, and lived a life of service to the sons and daughters of his homeland.” Governor Rahmy offered his sincere condolences to the people of Egypt, the Coptic congregation, Pope Tawadros II, and to the people of Mehalla who he greatly respects and appreciates. 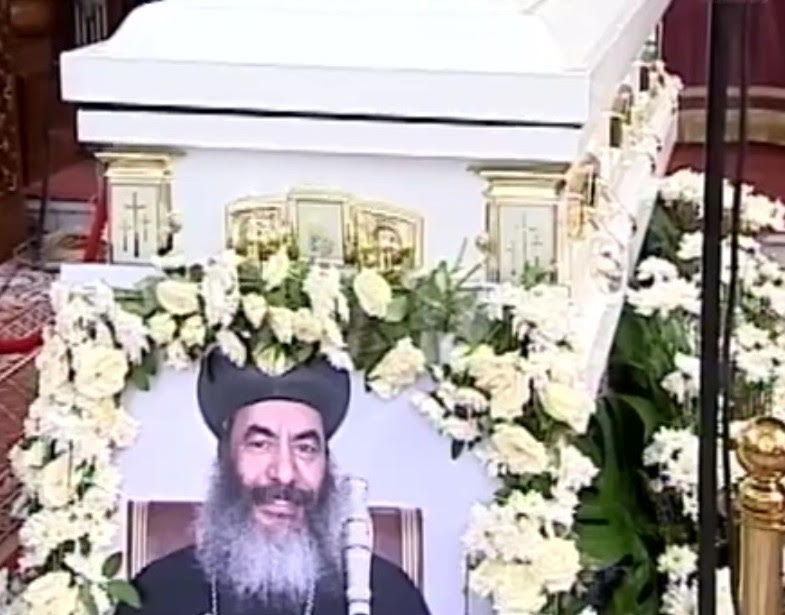 During the funeral service at St Mark’s, a visibly grieved Pope Tawadros began his word with the verse: “Blessed are those you choose and bring near to live in your courts”, saying that “despite the pain and grief, we bid Anba Karass farewell on hope of the Resurrection. We bid farewell to a faithful servant, godly monk, and venerable Bishop.”

Given that death is the only truth in our lives, the Pope said, Anba Karass lived his life in a state of preparedness and eagerness for eternal life; “for what profits a man if he gains the whole world but loses his own soul? (Mark 8:36)”.

“Anba Karass’s service in Mehalla, and before that in Naqada,” Pope Tawadros said, “was built on love and exemplary humbleness. He loved all: old and young, the near and the far, in simplicity and gentleness. He learned integrated pastoral care from serving with Anba Pimen some 22 years, and applied it well in Mehalla. But even after he became Bishop-General of Mehalla, he never forgot Naqada, and would always visit and serve there once a month. 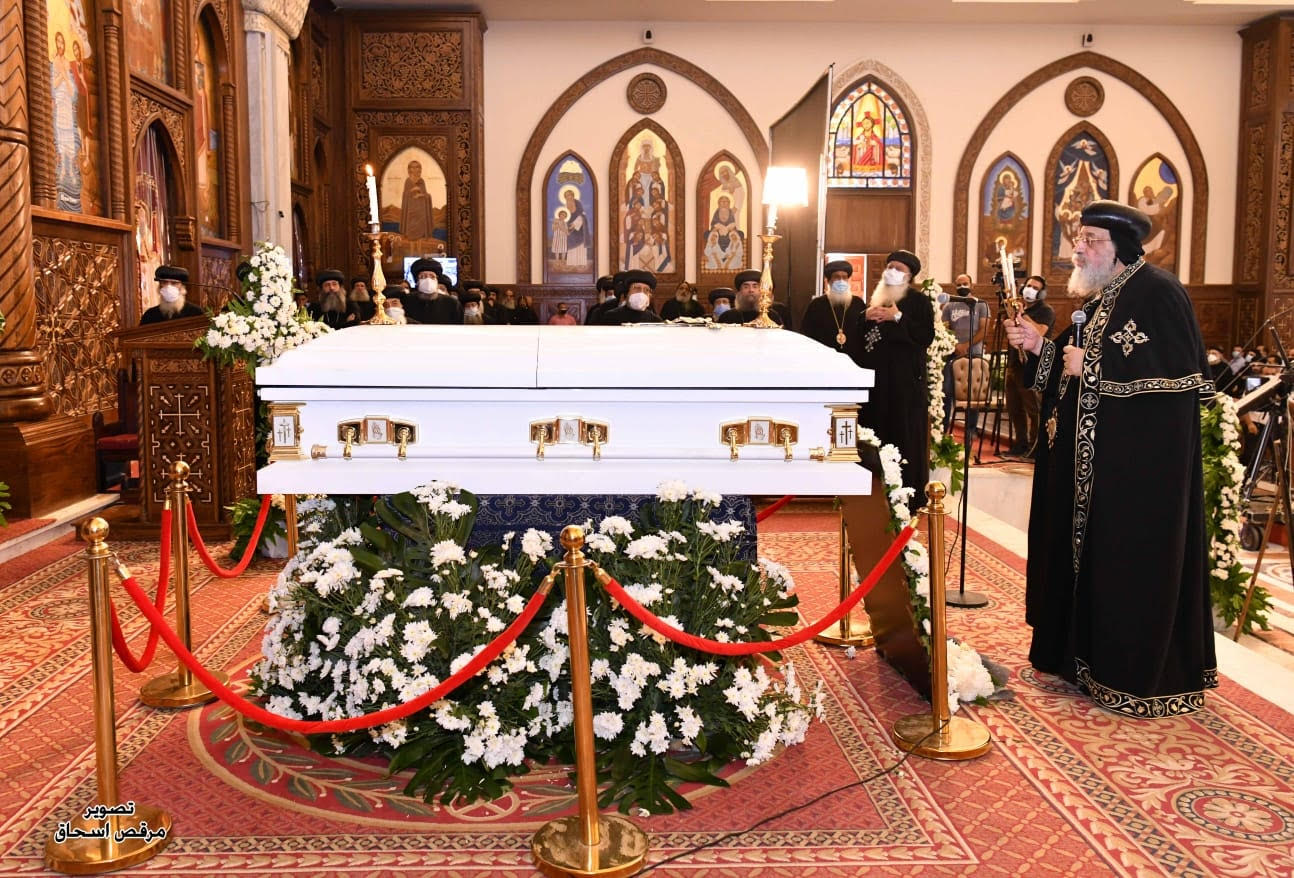 The Pope spoke of Anba Karass as a scholar who loved knowledge and contemplation, the outcome showing in his sermons which were famous for their strength and depth, yet also for their extreme simplicity that penetrated hearts and souls. He always spoke of the promise of eternal life, a promise worth labouring and sacrificing for.

Anba Karass was, according to Pope Tawadros, a man of peace, a wise peacemaker appreciated by all.

The Pope concluded by offering his condolences and blessings to all; and asking for the prayers and intercession of Anba Karass “for the Lord to grant us to complete our days in peace, through glorifying His name in peaceful service.”