The dozens of Egyptians who gathered today early afternoon in Tahrir Square in central Cairo to demonstrate against the rule of the Ikhwan Muslimoun, the Muslim Brotherhood (MB), rose

The dozens of Egyptians who gathered today early afternoon in Tahrir Square in central Cairo to demonstrate against the rule of the Ikhwan Muslimoun, the Muslim Brotherhood (MB), rose in number to thousands as the weather got cooler towards sunset.
The demonstrators began with the usual anti-Ikhwan slogans but, an hour later and with further influx of protestors, took off to the streets of Downtown Cairo in a march that vocally publicised their anger and their demands.
They chanted slogans which stressed: “Egypt is a state not a Caliphate”, and “Down, down with the rule of the Supreme Guide [of the MB]”.
The leftist figure Essam Shaaban said the MB brought in a rule that was no better than the previous one, and that if the Egyptian people do not wake up to the peril awaiting them with 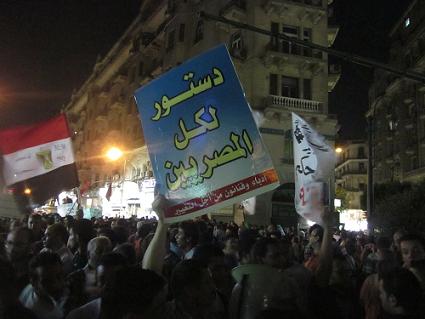 the MB rule they risk a severe deterioration in the conditions in Egypt and a confiscation of freedoms.
The protestors criticised what they described as a coalition between the MB and the military, and demanded that the military figures responsible for the attacks against the revolutionaries should be brought to justice. They also demanded that President Mursi should pardon the revolutionaries who were now in prison; he had only pardoned the Islamists prisoners.
Apart from the predictably high turnout of seculars and leftists, the demonstrators included a visible number of Azharis, those who belong to the venerable Islamic institution of al-Azhar. The Azharis blamed the MB for exploiting religion for political gain, deluding Muslims, and 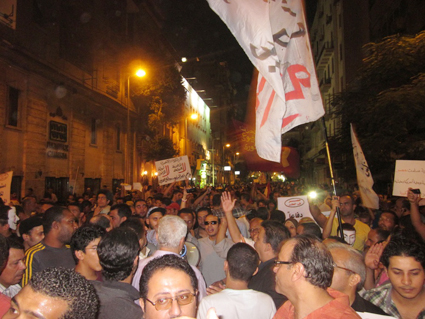 denouncing opponents as kuffaar (infidels). They warned that, if the MB persist in that policy, Egypt is headed for backwardness and crushed freedoms.
WATANI International
31 August 2012

In Tahrir Square: the seculars and the Islamists fight

A statement to the Egyptian nation

The Church offers its condolences