The date 24 April 1934 will go down in history as the day that saw the birth of the first organisation in the world concerned with Coptic Studies. Led by members of the prominent Coptic family of Boutros-Ghali, the Société d’Archéologie Copte (SAC) was founded by a group of Egyptians concerned with conducting, enhancing, and publishing Coptic Studies.

With 86 years behind it today, SAC has attained international stature in the field, and was pivotal in founding the International Association for Coptic Studies in 1976. 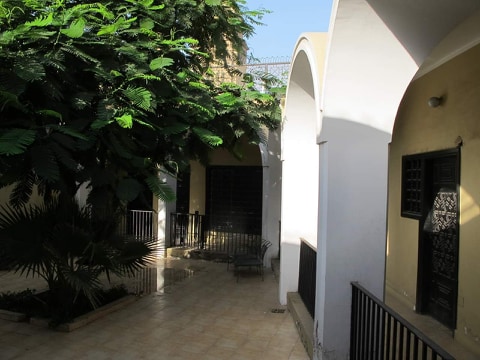 Today, under the leadership of Wassef Boutros Ghali, SAC continues to thrive. Watani talked to Nabil Farouk Awad, Curator of the SAC library, who delved into the Société’s history and uncovered details on its activities back and now.

“It was Mirrit Bek Boutros-Ghali who at the age of 26 took the lead to found the SAC,” Mr Awad told Watani. “He managed to gather a number of persons interested in Egyptian culture and working in the field of archaeology to convene in a hall at the Coptic Museum in Cairo. There, they agreed to establish the Société d’Archéologie Copte.” But this was not the original name, Mr Awad said; upon its foundation, the society was named the Association des Amis de l’Art Copte (The Society of Friends of Coptic Art). In 1937, Charles Bachatly, Secretary-General of the Society since its foundation in 1934 and until he died in 1957, persuaded its members to change its name to Société d’Archéologie Copte (Society of Coptic Archaeology) since he felt this name better suited to the core interest and activity of the organisation. 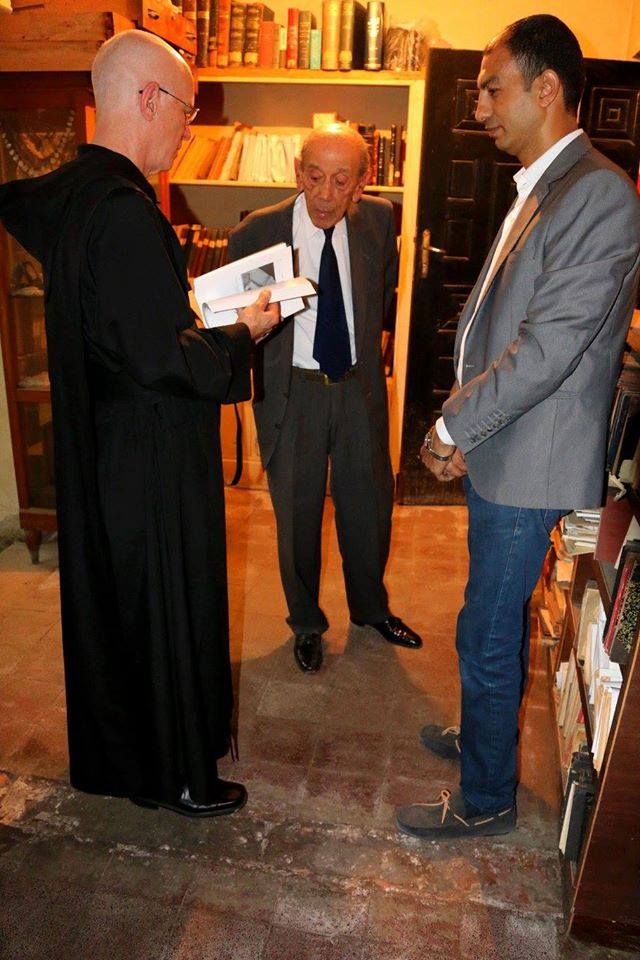 Since its foundation, the Société has filled a substantial void in the global scholarship field which lacked an institution concerned with Coptic studies and archaeology. “It made sense that such an institution should be based in Egypt, in the heart of Cairo,” Mr Awad said.

Throughout the 86 years of its age, SAC has had an outstanding list of secretary-generals, starting with Charles Bachatly. When he passed away in 1957, Liturgy Professor Oswald Buremester carried the torch, followed by Papyrologist Leslie MacCoul. After them came Antoun Khater, Yohanna Nessim, Musicologist Margit Toth, followed by the Franciscan Fr Wadie Awad. Today, Nabil Farouq Fayez fills the post of SAC Secretary-General.

From chateau to church

The SAC started its activity in three rooms on the ground floor of the chateau of Mirrit Bek Boutros Ghali in the Cairo suburb of Garden City. 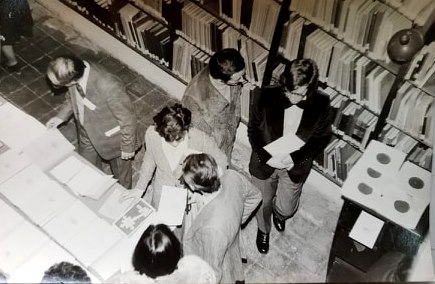 In 1963, it moved to new premises in the grounds of the 1911 al-Boutrossiya Church in Abbassiya, Cairo; and has remained headquartered there to the present day. The Boutrossiya church, consecrated to St Peter and St Paul, was built by and remains under the care of the Boutros-Ghali family. Under the church is a crypt that acts as a burial place for the family.

In 1960, new buildings were erected in Boutrossiya grounds, and one of them was dedicated to SAC. It is a one-storey building that stands in an open courtyard surrounded by a porch lined with the entrances to separate rooms. It has its own gate on Ramses Street, a main Cairo thoroughfare.

According to Mr Awad, SAC has always maintained its full autonomy as a scientific institution. The members of its boards, he said are of diverse backgrounds and belong to various religions. In 1984, on the occasion of SAC’s 50th anniversary, Mirrit Boutors Ghali wrote the following on his report on SAC: “I hope that the works carried out by our society over the last 50 years, have contributed even if on a small scale in spreading knowledge on Coptic history and heritage.” 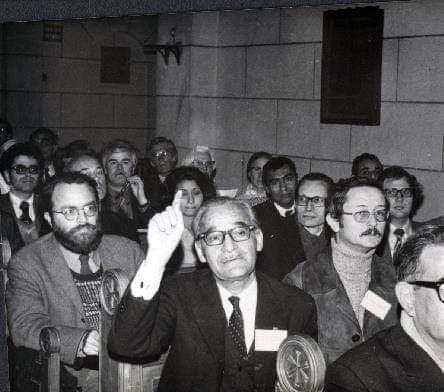 It was in the 1970s during the first Conference on Coptic Studies held in Cairo, that Coptic scholars Mirrit Boutros Ghali and Gamal Mokhtar spearheaded the establishment of an international association for Coptic studies. It was agreed to establish the International Association for Coptic Studies, and to hold the Coptic conference every four years. It was later agreed that the SAC building would house the headquarters of IACS. In 1976, the first international conference on Coptic studies was held inside the Abbassiya headquarters, and it was during this conference that the term Coptology was coined and launched by Aziz Surial Attiya. 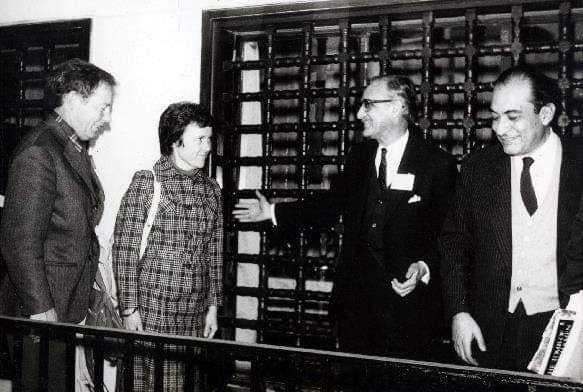 The archaeological expeditions of SAC took off in 1935 and continued until 1955, Mr Awad said. Between the years 1947 and 1948 Bachatly unearthed the Monastery of Phoebammon west of the Nile in south Luxor. Between the years 1961 and 1965, SAC published a report in three volumes on the antiquities found in the site of the Monastery of Phoebammon, the texts and on plants, animal and chemical remains.

Consequently, he emphasised, there was an urgent need to publish research in the field of archaeology, languages and other subject-areas, written by Egyptian Coptic scholars.

“Under Bachatly,” Mr Awad said, “the Société became a scholarly academic institution. Bachatly lay the foundation for the SAC’s most prominent publications, including the Bulletin, the art and archaeology collection; the texts and manuscripts collection; the collection of reports on the excavations; in addition to various other publications such as the map of Christian Egypt and some books on Coptic antiquities in Egypt.” 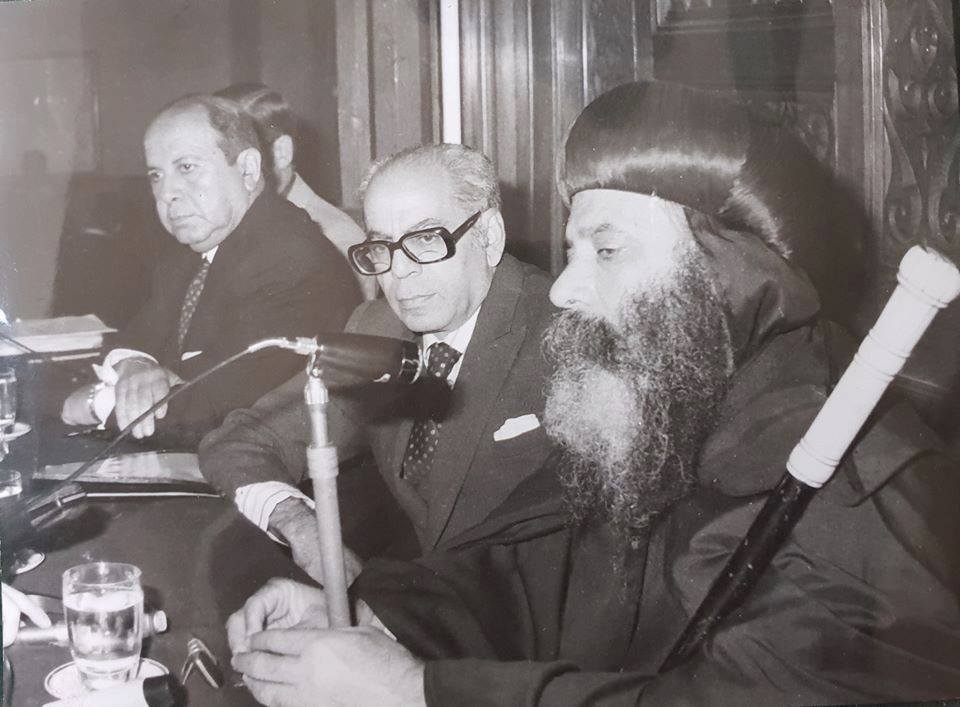 Since its foundation, Mr Awad said, the SAC has published more than 50 books in various fields of Coptology. These are divided into five categories. The first, Fouilles de la Société d’Archéologie Copte, is concerned with the SAC’s archaeological work, and includes three volumes on the Société’s excavations at the Monastery of Phoebammon in Luxor, by Papyrologist Leslie MacCoull. The second focuses on art and antiquity; three books were published under this category.

The third category, Textes et Documents, includes 18 books. The most significant and remarkable scholarly work carried out by SAC in this category was the compilation of Sawirus Ibn al-Muqaffa’s manuscripts on the history of the Patriarchs of the Egyptian Church, titled History of the Holy Church, and published in a book that carries the same title. Sawirus Ibn al-Muqaffa was an 8th-century Coptic Bishop of al-Ashmunin, a writer and historian. The SAC research and compilation of his volume took from 1943 till 1974. Eminent scholars in Coptology and Arabic Christian heritage worked on this huge project; among them Aziz Surial Atteya, Yassa Abdel-Messih, Oswald Hugh Ewart, KHS-Burmester, and Antoine Khater. Mr Awad explained to Watani that this was the sole scientific publication of Sawirus Ibn al-Muqaffa’s manuscript. He said that SAC would print the book in the Arabic and English languages, and sell it at subsidised prices.

The most recent of the Textes et Documents publications came out in 2017, a book on the rites of Holy Chrism compiled by Yohanna Nessim Youssef and Sameh Farouk Henein from Manuscript 253 Rite, and Manuscript 1  at Anba Antonius Monastery in the Red Sea. 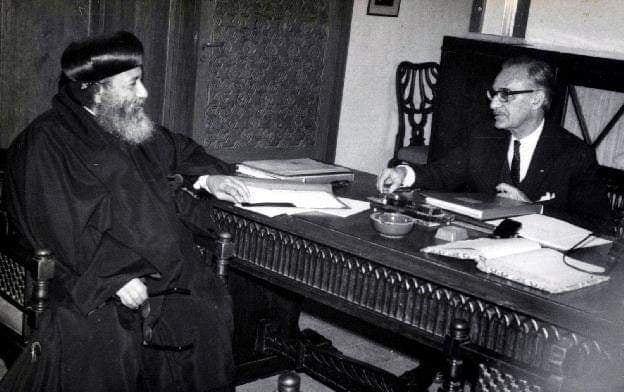 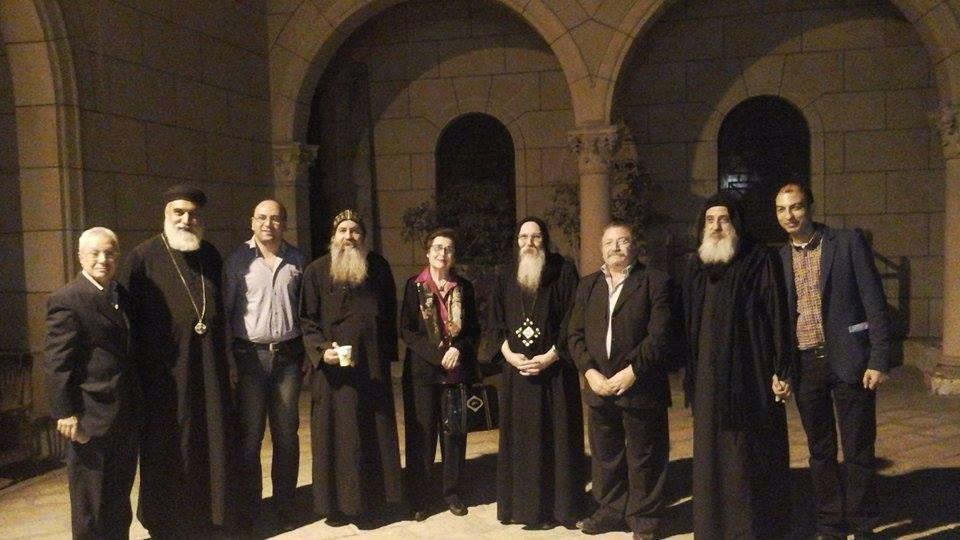 Under Bibliothèque de Manuscrits, Mr Awad said that SAC published the indexes of manuscripts belonging to three 4th-century churches in Cairo: Abu-Serga, and St Barbara in Old Cairo; and Mar-Mina in Fomm al-Khaleeg. SAC is currently working on scripting, cataloguing and indexing the manuscripts of St Macarius Monastery in Wadi al-Natroun in Egypt’s Western Desert. The catalogue is expected to be printed in two or more volumes. Under Divers category, Mr Awad said, SAC has published 14 titles, the most recent of which was a book of sermons of St Shenouda the Archimandrite. 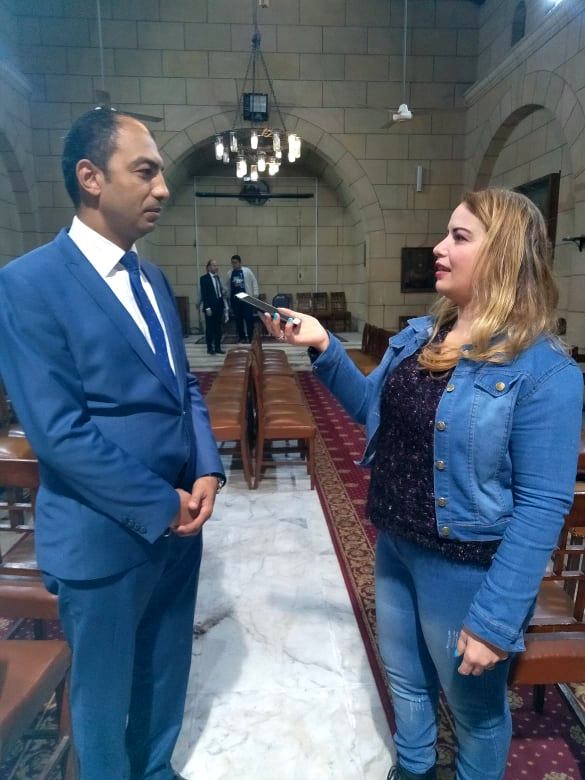 Mr Awad also told Watani about SAC journal: Bulletin de la Société d’Archéologie Copte (BSAC). The Bulletin is published annually and includes the latest in Coptic Studies. BSAC is renowned in international scholarly Coptic circles; it was first issued during the early years of SAC, but its publication was at times interrupted, such as between the years 1939 and 1945 during WWII. In recent years, however, it has been published regularly. Issue 56, the most recent issue, appeared in 2017 and was dedicated to Professor Jacques van der Vliet former President of the International Association for Coptic Studies for his 65th birthday.

Mr Awad told Watani that SAC is currently going ahead with the work it started back in the 1940s, in cataloguing and indexing Coptic and Arabic manuscripts inside and outside Egypt, especially those in old monasteries and churches. Over the last year, SAC played a substantial role in cataloguing the Coptic manuscripts of the Bibliothèque Nationale de France (Bnf).

Among SAC’s gems is its library which contains rare books and documents of significant value to researchers in Coptic studies and heritage, probably unavailable elsewhere in Egypt. Mr Awad told Watani that it was Bachatly during his time as Secretary-General who founded the library. SAC has a wealth of 20,000 titles most of which are written in European languages and cover topics that include Coptic studies and Egyptology, as well as Syrian, Ethiopian, Armenian and Arabic studies. According to the library curator, Mr Awad, the library has a section for international periodicals that arrive from 15 countries around the world. 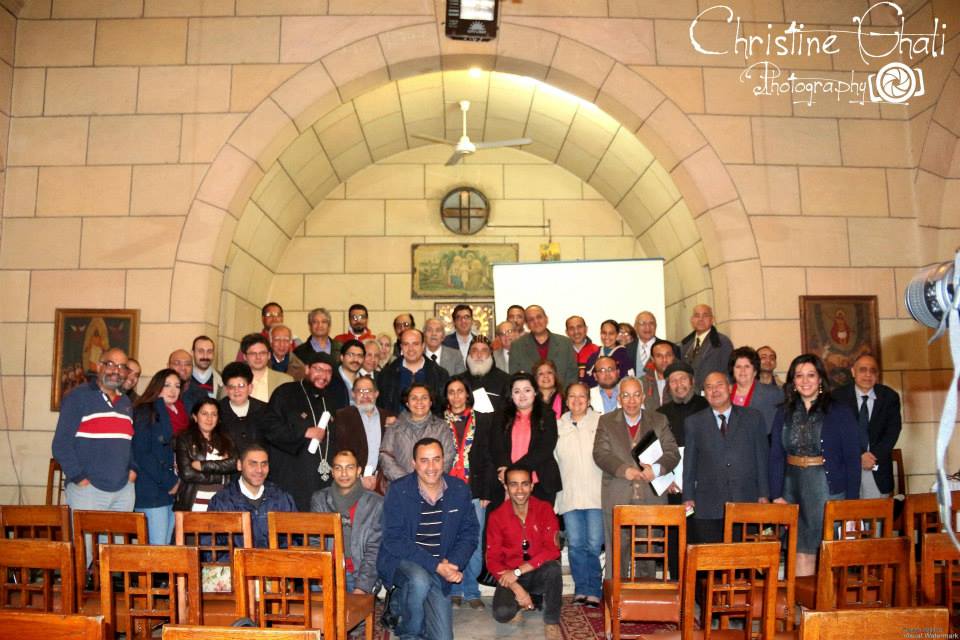 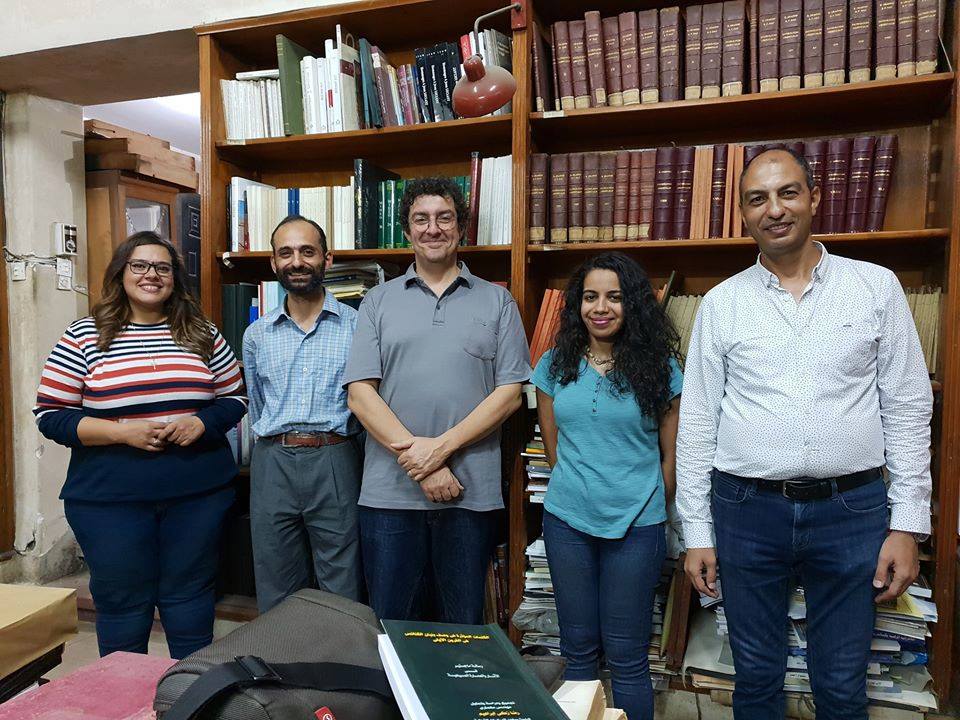 On a historical note, studies concerned with Coptic culture, history, and heritage started only in the early 1900s, with interest in Coptology generally growing through individual effort. It was Markus Pasha Simaika who worked hard to persuade Pope Kyrillos V to establish a museum for Coptic antiquities. Through Mr Simaika’s efforts, the necessary funds were raised, and the Coptic Museum was built on land owned by the Coptic Church. It opened in 1910, and became a national museum in 1933.

In 1954, the Institute of Coptic Studies (ICS) opened its doors with sections for Arabic studies, history, art, archaeology, African studies, music and hymns, and Coptic language. ICS too has been a beacon of Coptology.

Today, the three institutions: the Société d’Archéologie Copte, the Coptic Museum, and the Institute of Coptic Studies, constitute landmark destinations for scholars and researchers on Coptology. 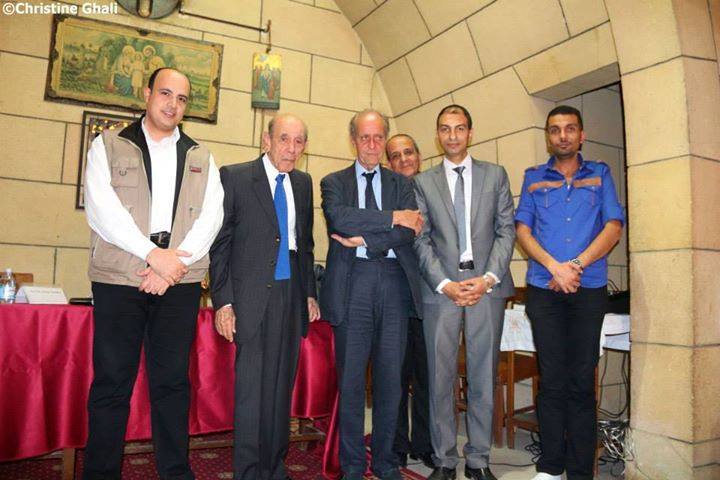 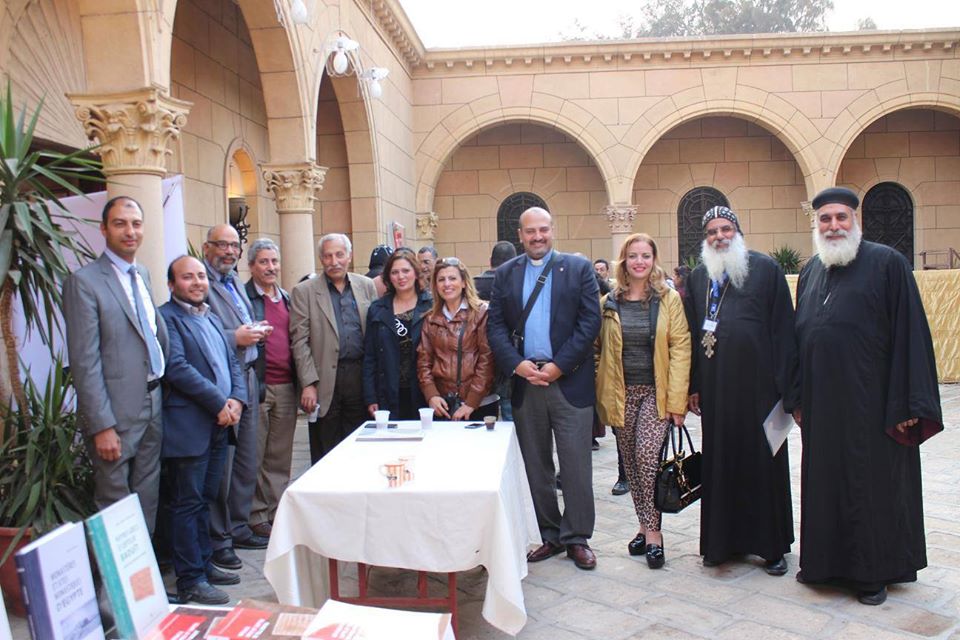 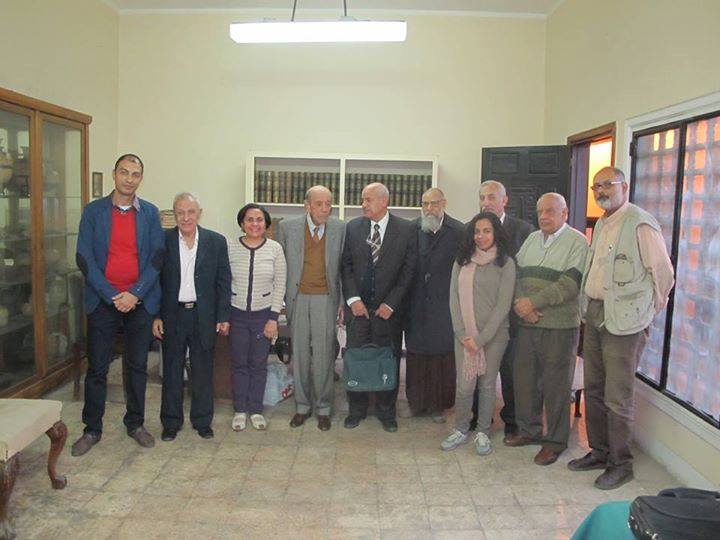 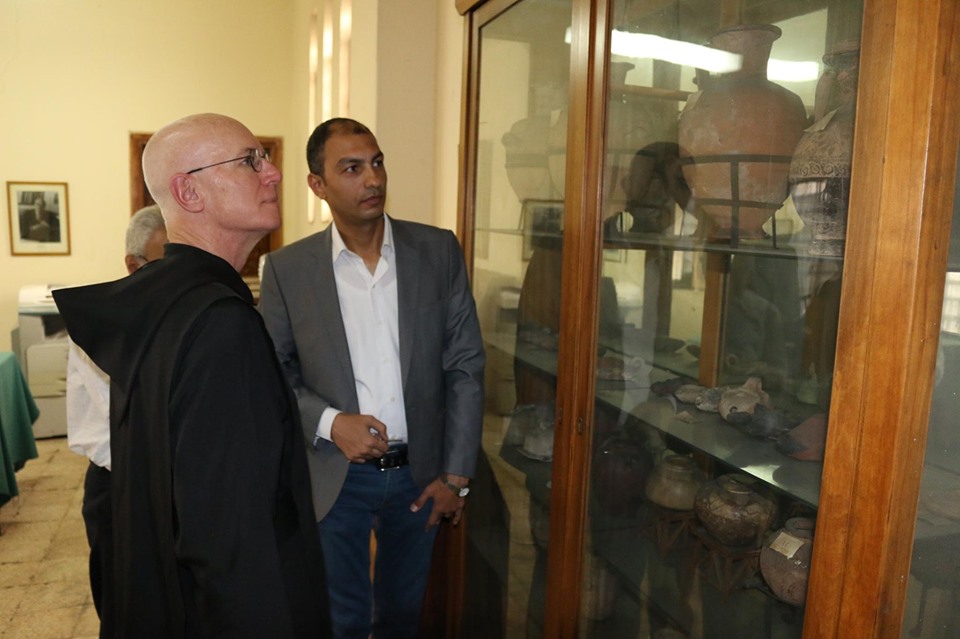